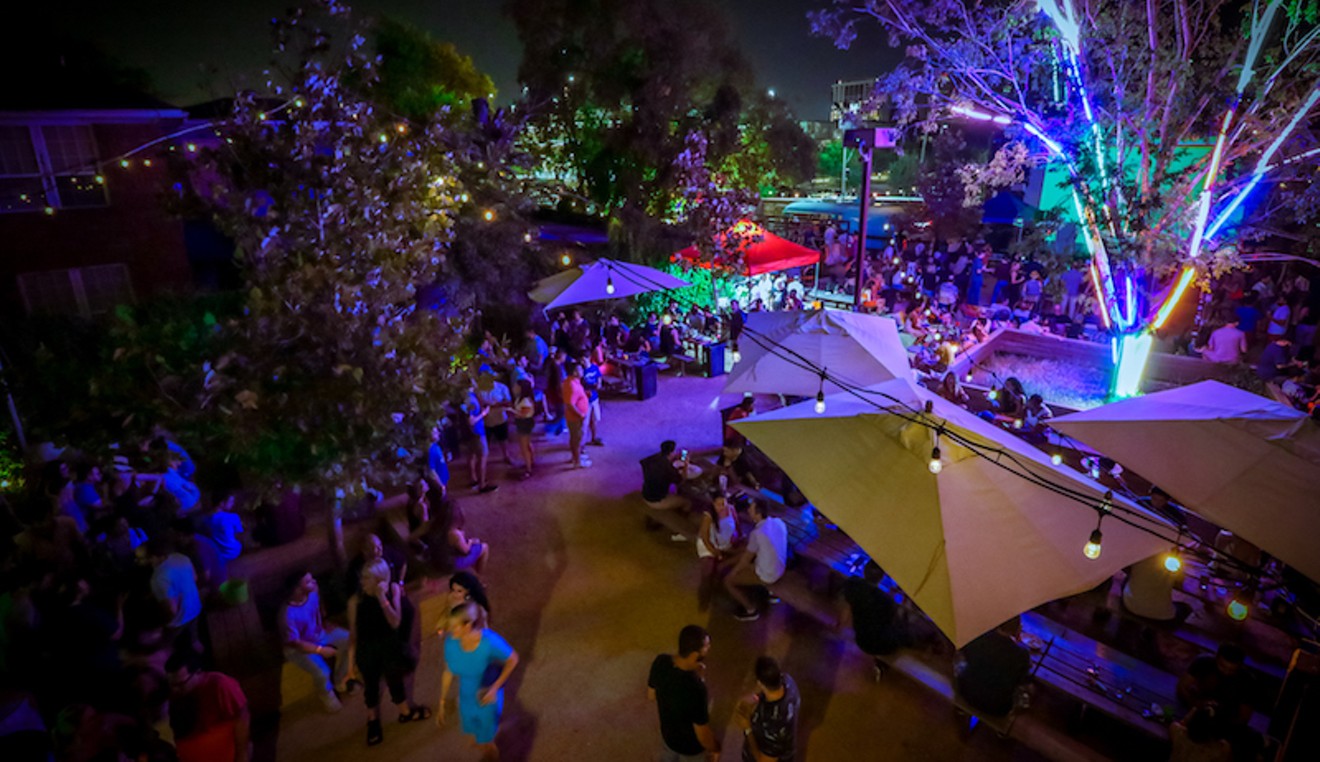 Axelrad is hosting its first ever drive in, rooftop concert featuring El Lago and Flower Graves. Photo By Marco Torres
Update 5.22.20: Axelrad says their event is sold out. It will be livestreamed so if you want to listen to it, go to axelrad.io.

As the city is slowly opening back up, bars and music venues are trying to find ways to roll with the new normal. Axelrad, the eclectic outdoor midtown bar, planned an innovative event weeks before the Governor announced his decision to begin phase two of reopening the state.

Axelrad will be hosting a drive-in, rooftop concert on Saturday, May 23 featuring local psych rockers El Lago and Flower Graves. There are 75 spots available for concert goers to enjoy the show from the comfort of their own cars by tuning into Axelrad’s FM station. The concert will be projected for the drive in guests onto the building and live streamed to fans at home on the venue and artists websites.

Check in for the event will begin at 6:30 and then El Lago will kick off the event at 7:30 p.m. followed by Flower Graves at 8:30 p.m.  The event is pay-what-you-wish and will be benefiting the performers and staff with additional proceeds going to the Houston Arts Alliance and the Houston Music Foundation.

Event flyer by Valery Pinchuk/@bluvvd
Axelrad is the first venue in the city to offer live music while practicing social distancing and it may be the best way for music fans who don’t yet feel comfortable joining others in a bar to enjoy live music.  Throughout quarantine Axelrad has been hosting their online radio station and focusing their attention directly on local bands, a part of their mission since they opened in 2015.

“Axelrad really celebrates live music,” says partner Adam Brackman. “We set out to make something that was approachable for everybody so we've never charged cover for live music and we know that a lot of our customers have taken this quarantine pretty seriously.”

“We've been really trying to figure out how people can interact with all of these different platforms,” says Mario Rodriguez, partner and owner of local music agency and record label Wonky Power. “So far, we have had over 30 different artists locally on Axel radio and it has been pretty good so we're trying to step it up with this roof top thing.”

Axelrad has already seen an enormous amount of interest and support for this event and they plan to hold similar events in the near future.  “Certainly it's in demand,” says Brackman. “Everybody has been forced to stay at home for months now without an experience where they can see live music.”

“We started this as an experiment to have people while they are in quarantine be able to watch their favorite musicians and also donate directly to them,” explains partner Monte Large. “We know that musicians are hurting right now and however we can help to provide a platform for these artists to be able to make something from their efforts.”

“We started this as an experiment to have people while they are in quarantine be able to watch their favorite musicians and also donate directly to them.”

Though Axelrad will not be open as a bar yet, concert goers will have access to porta-potties and be able to order food and drinks from neighboring Luigi's. Attendees are encouraged to stay in their cars or on the hoods to encourage social distancing and wear masks when ordering food or using the restroom. If the weather turns, as it does in Houston, the event will be rescheduled.

When asked how they chose the two bands to kick off their rooftop series, Large says “The whole psych rock genre is great for this setup. They're both incredible musicians that we are just huge fans of and we wanted to support them as much as we could.”

Anyone who has ever visited Axelrad’s warm outdoor space and vibrant indoor bar knows the welcoming vibe that it gives off. With its countless hammocks hanging in the outdoor space and all the colors of the rainbow inside the 100 year old restored home, Axelrad provides a relaxing getaway in the middle of midtown.

“Everything that we have done has sort of been an effort to make Houston a better place,” says Large. “Axelrad was an attempt to celebrate Houston and what we like about Houston; the multicultural aspects, arts, music, and being outdoors.”

Axelrad is also launching their online stores which will sell pint glasses, T-shirts, hats, hammocks and the same hand made sculptures they feature on their taps made by the Venezuelan artist Maria Rangel. “It is an important time for businesses to take a look at their model and pivot if they can,” says Brackman.
KEEP THE HOUSTON PRESS FREE... Since we started the Houston Press, it has been defined as the free, independent voice of Houston, and we'd like to keep it that way. With local media under siege, it's more important than ever for us to rally support behind funding our local journalism. You can help by participating in our "I Support" program, allowing us to keep offering readers access to our incisive coverage of local news, food and culture with no paywalls.
Make a one-time donation today for as little as $1.