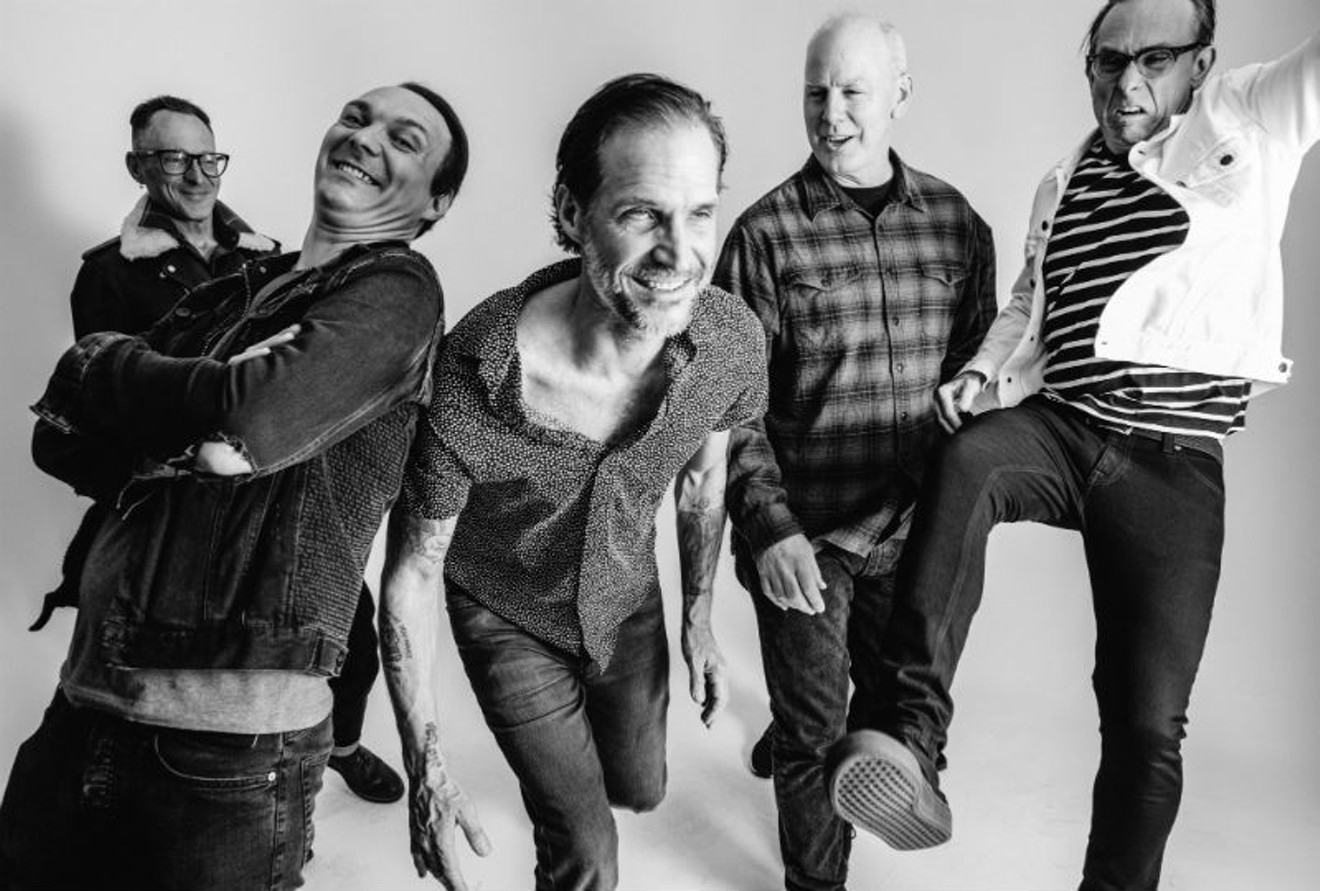 In May 2019, there were several mass shootings in the United States. Politicians allowed wildfires to burn uncontrollably in the Amazonian rain forest. Wars raged in the world’s typical hot spots. Donald Trump was still the American president. And, the seminal punk band Bad Religion released its 17th studio album, the appropriately-titled Age of Unreason.

According to Brian Baker, longtime guitarist for the band, which hits Houston’s House of Blues October 1, the “unreason” isn’t simply a U.S. problem, it’s a global one.

“It really speaks to a theory I stumbled onto as soon as I started to play out of the U.S. regularly about 25 years ago, and what it is is that everywhere is pretty much the same. The differences, these wild, wild divides that people perceive who’ve never left the country, are just a complete fallacy,” said Baker. “We go to play countries in Europe where they’re having this exact same resurgence of this nativist, far-right ideology – you know, this is all over the place. This is in Greece, this is in Spain, this is in South America, this is in Germany, this is in the UK.

“We’re all dealing with the same problems, ours just happens to be Donald Trump and basically the Republican Party, which doesn’t seem to like Americans very much,” Baker continued. “It’s a global problem and it’s good to be able to do something that can resonate everywhere. It seems timely everywhere we go and I’m happy because I’m trying to provide conversation and maybe a little insight. I mean, that’s kind of our protest.”

That’s long been the mission of Bad Religion, which formed in 1980 and became one of punk’s best-selling acts on the strength of its topical songs and smart lyrics. Singer Greg Graffin holds a doctorate in zoology and is a college lecturer. Guitarist Brett Gurewitz founded the Epitaph record label. Baker is a founding member of the influential hardcore act Minor Threat. These are guys with skin in the game, the purpose of punk is personal to them. Baker says it’s been interesting to see how the music has answered the call since its earliest days.

“I think that punk was a lot more exclusive back then and that was really just a product of the size of the people interested in the genre. There’s benefits to that in that you’re sort of flying under the radar in a lot of ways and I think that really promotes some wild artistic expression when you’re basically involved in a form of music that you’re not trying to monetize. Basically it’s a lot easier to create when you’re not trying to think of an end game or a reason for your artwork to exist. It’s just a natural thing,” he said.

“But, we’re talking about protest music and punk rock has always been that, so the fact that it’s become ubiquitous and such a large part of the musical conversation I think kind of outweighs the exclusivity and I think it’s fantastic that we have this style of music being taken as seriously as any other genre that you would find. I’m still astonished that it has so much traction, but message-oriented music I think has always held a special place in people’s hearts.”


Bad Religion’s latest message-oriented music includes “The Kids Are Alt-Right,” the first single from Age of Unreason. A play on The Who classic, the song is a boot to the face of the alt-right movement. But, as Social Distortion front man Mike Ness learned recently, fans sometimes change their political beliefs over time. Ness confronted a MAGA supporter at a show last year. Baker said Bad Religion isn’t immune to this phenomenon.

“We haven’t had a situation like Mike had to deal with," said Baker, who called Ness "a serious left motherfucker" and a "straight-up good dude."

"There hasn’t been any physical presence that I’m aware of in any of our concert environments – I mean, the (band) logo alone pretty much speaks to that. But I will say, because of the anonymity online, I’ve overseen a number of squabbles on various social media platforms where there are people who are like, ‘I really, really love your music, but leave the politics out of it,’” he said.

“If Brett posts something about the coming apocalypse, you know, how the lessons of the enlightenment are being discarded by this cabal of greedy fuckers, and you get people who honestly I think may not have really gathered that this has been a Bad Religion mission statement since 1980,” he said. “It’s kind of fun to watch our hardcore fans go back and forth with these people who are really, you know, ‘keep politics out of it.’ That doesn’t fly in Bad Religion world because this isn’t supposed to be just a good time. You’re allowed to have fun but we’re ringing some bells here and we’re trying to provoke a lot of thought."

Baker caused a bit of a stir last year when he posted an Instagram photo of the members of Minor Threat recreating the front porch photo from their Salad Days EP. Fans went wild with reunion talk. The band broke up in 1983 but it continues to draw new generations of listeners.

“Minor Threat, there’s a lot of things that are attractive about it,” said Baker. “We’re very lucky to have had just an amazing singer and lyricist in Ian (MacKaye). Basically, the Minor Threat was pretty much an innovator in that hardcore genre. I mean, I don’t think we were the first band to play like that but, in general, we’re kind of in that first line.

“If you discover punk rock and you become fascinated by it, you immediately go back and see, well, where does this all come from? And there’s basically kind of a handful of bands – your Black Flag, Dead Kennedys, Minor Threat – these are kind of just standards that you learn from, so we’re very lucky to be in that group. It’s the same thing as classic rock, where people who want to start learning to play guitar discover the Rolling Stones and The Beatles. We were just at that right place at the right time.


“But, I think also with Minor Threat what specifically might help it is that Ian has continued to be active in so many great, creative ways. Minor Threat wasn’t just a band and then that was it,” Baker said and noted that the band members’ ongoing work in music “gives a little electricity to Minor Threat because you can follow the trajectory; and, also the fact that it has never re-formed is exciting. And we never will, for a number of reasons, not the least of which is we aren’t minors anymore, being in our fifties.

“It’s the sum of all of these things,” Baker said of the band’s ongoing appeal. “Being right there at the right time, having a short-lived career and having principals in the band continue to make music and do things that are relevant to punk for the following 40 years.”

We began by asking about Bad Religion's newest music and end by discussing one of its oldest albums, Into the Unknown. Some readers asked for Baker’s take on the album, which has never been reissued and is a sonic anomaly in the Bad Religion catalog. Some fans now consider it a chestnut that was ahead of its time.

“It’s before my time but I’m pretty familiar with the story. The thing about that album, because of its scarcity it’s become something that people are more interested in. But, basically that record was a Bad Religion record that Brett and Greg wrote and it was relatively experimental when it came out. It was more keyboard oriented and it just really didn’t sound like the first few Bad Religion records.

“The long and short of it is nobody bought it,” Baker said laughing. “Almost every record they put in the stores got returned to Epitaph and it got to be where Brett was trying to burn them. There were stacks of them and no one would take them and this was kind of before advanced recycling and he was trying to burn these records at Epitaph and then he realized there was this toxic cloud just enveloping the neighborhood and so he has to figure a better disposal method. That’s really all that was, it was just a record that people really didn’t like, and it hadn’t been reissued because there didn’t really seem to be any demand.

“We found a song on that record and we’re playing it in our live set now,” Baker continued. “No one’s hiding Into the Unknown, it’s just not around. And when you listen to the record you kind of get it, I mean it’s definitely not our strongest work. Graffin and I have this thing about our songs which is they can’t all be winners.”

But there have been many, many winners and Houston’s Bad Religion fans will get to hear them again soon. Baker said his entire family is from Houston so he recalls coming to visit the city as a kid years ago. He’s been here plenty as a member of one of the world’s greatest punk bands.

“We’ve been fortunate enough to get to come back to Houston every few years for decades. We were just there in 2016 with Against Me! That’s about a three-year gap, that’s about the biggest gap we’ve had in recent memory and we had to get this new record made. I think it’s a forgivable lapse. But the vibe is great there, everyone’s always been really cool to us.”