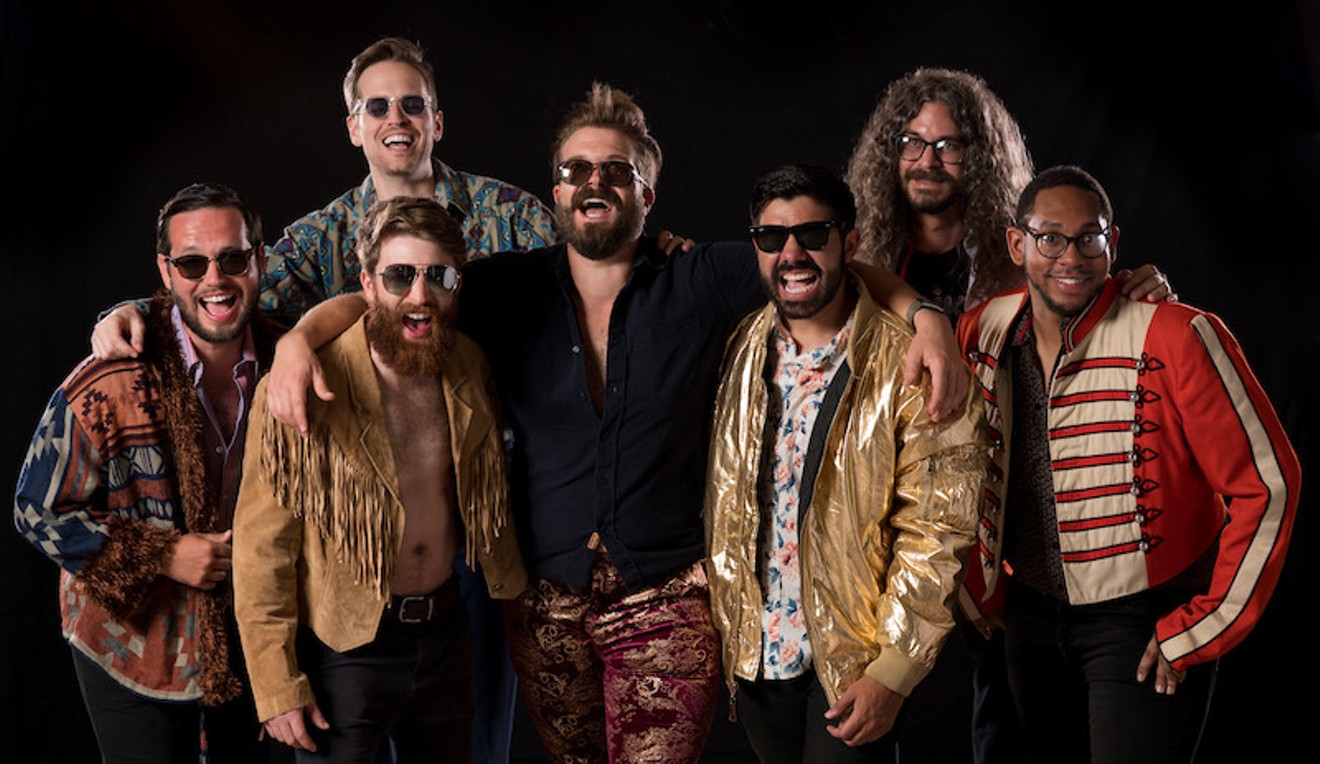 Bayou City Funk Will Perform At Heights Theater on Saturday, January 29. Photo By Ben Grant
Bayou City Funk has been steadily building a fanbase and following in and around the Houston area with their explosive live shows as they have easily become the city’s go to funk band.

Last year the band hit some great local milestones playing Discovery Green and The Art Car Ball. This Saturday, January 29 they will be performing for the first time at The Heights Theater with Austin based duo, The Watters.

“What is cool to think about is, this Heights show is really coming at our five year anniversary as a band,” says David McJunkin who plays guitar and keyboards in the seven-piece band and is one of three original members along with Sean Garrison and Joey Barchas.

“Obviously as a Houston band, we love that venue,” says guitarist and vocalist Garrison. “We’ve seen so many bands that are our peers or inspirations to us at that venue and we've been wanting to play there for a while. We couldn't be more excited about getting to play there and what that means for us and to us moving forward.”

Bayou City Funk released their debut album, Down To Funk on Splice Records in 2018 and since then have released a string of singles showing off the bands evolution into becoming more than just a funk band, a product of hard work and complimentary styles from each of the band members.

"Funk is one of those genres where you feel it," says Garrison. "Even though I love listening to all different kinds of music, funk is something that I have always been in love with. It's just so fun to play and to listen to. It is impossible to not be happy or having a good time when you're playing or listening to funk," he says  describing the bands instant connection over the genre.

"It is impossible to not be happy or having a good time when you're playing or listening to funk."

“The band formed through a love of funk and roots music so starting out, we already had such a great amount of funk music from all the greats that came before us to draw on but like any band you would hope after a few years you start developing your own sound.”
Their 2020 release, "Sidewalking" tells the story of a wandering bassist who takes a drink from a mysterious character only to emerge as a super powered, funky bass player. The song takes multiple sonic twists to follow along the story telling and listening to it at home, it’s easy to see how the fun could translate in their live performances.

“It is something that we are actually continuing to try and evolve and better understand,” says Garrison of capturing the live energy of a large, funk band. “We are really proud of the songs that we've recorded in the studio but we do feel that they do come out feeling cleaner or more polished than the live music does.”

Bayou City Funk is planning on releasing a new album later this year and during the recording process they are focusing on capturing more of their authentic “live, gritty sound” that has made them a Houston favorite. They will be performing some of their new, unreleased tracks at The Heights Theater with the full band.

Garrison describes how fans often ask him how the band is able to get seven people on the same page, a seemingly rare occurrence in this day and age. “How we met each other and came to be is an interesting story but there was never a question of what to play, funk was just it,” says Garrison.

Garrison, McJunkin and Barchas all met through playing music with Houston bands. Garrison describes the instant connection felt among the three which eventually led to other like minded local musicians joining the band.

“The seven members that we have now have been the same guys for the last three years,” describes Garrison. “We all agree that it is the best iteration of the band that ever has been so for the foreseeable future, that will be the crew.”

The band’s jazz backgrounds come across in their playing as they add depth and layers to the song's instrumentation matching Garrison's expressive and smooth vocals. “I find that funk is quite a broad genre,” says McJunkin when discussing the genre.

“The beautiful thing about it is we are just writing catchy music and it happens to have a tight drum beat and horns. It's really just about writing music that speaks to the musicians. I find funk is a musician's music, it can be super simple and it can be super challenging and technical.”

Bayou City Funk will perform with The Watters on Saturday, January 29 at The Heights Theater, 339 W. 19th. Doors at 7 p.m. $18.
KEEP THE HOUSTON PRESS FREE... Since we started the Houston Press, it has been defined as the free, independent voice of Houston, and we'd like to keep it that way. With local media under siege, it's more important than ever for us to rally support behind funding our local journalism. You can help by participating in our "I Support" program, allowing us to keep offering readers access to our incisive coverage of local news, food and culture with no paywalls.
Make a one-time donation today for as little as $1.