Big Eyes are: Shane Kerton, Kait Eldridge, Paul Ridenhour, and Jeff Ridenhour. Photo by Steve Kong/Courtesy of Girlie Action
Kait Eldridge probably doesn’t have anything against Tim Burton personally. But the singer/guitarist also probably wishes that director/writer named his 2014 biopic about the artist couple Margaret and Walter Keane something besides the same moniker as her band. Because now when you Google “Big Eyes,” you get a lot of photos of Amy Adams in a short blond                            wig and film reviews. Greenway Records cover
“I know! It was really annoying. When it came out, I kept getting text messages and people were emailing me and I was just going ‘Oh God.’” She says. “But we’ve been around longer than the movie, we played our first gig on New Year’s Eve 2009 going into 2010, and our demo came out a few months after. But most of our websites and emails have ‘Big Eyes Band’ to make it different.”

Eldridge hopes that her own Big Eyes at least have more of an internet presence after the release of their upcoming fourth studio album, Streets of the Lost (Greenway Records). Its ten tracks feature the punchy mixture of punk, hard rock, and pop that make up the band’s sound. And it has a lineup expansion since their last release in 2015 as a trio.

“This is the first record we’ve done with an additional guitar player, so we were able to track all of our instruments live,” Eldridge says. “I used to have to do every single riff and lick and lead and now there’s room to do more. Paul and I both technically play leads, so we will trade off and harmonize [the guitars] as well.”

The record’s first single is the insanely catchy earworm “Lucky You” – though it was the last song Eldridge wrote for the record, two weeks before recording in a Cincinnati studio.

“It’s the super poppy one, which always ends up being people’s favorites! I didn’t even have the lyrics until we got to Cincinnati,” she laughs. “Paul helped with a few lines. It’s like a ‘Fortunate Son’ by Creedence Clearwater Revival, about how some people have [economic] options that most don’t.”


But it’s the title track that stands out most from the others – and unlike anything that Big Eyes has ever recorded on its full length efforts or singles. “Streets of the Lost” is also technically the first song Eldridge attempted, with its writing roots going back to 2013. She’s tried to record it with almost every lineup of Big Eyes, but didn’t feel it came out right until this one tackled it.

“It’s the longest song we’ve ever put out. The intro with the synth makes it sound a lot moodier,” she says. The track’s inspiration came from Eldridge’s viewing of the 1984 documentary Streetwise. Directed by Martin Bell, it showed the often harrowing life of homeless and runaway street kids in Seattle. The song is written from their perspective, where days and nights are spent in parking lots, begging for spare change, engaging in petty crime, and trying desperately to forge relationships.

“Something just hits you so hard about it. The kids are all just these characters and it’s so sad, but they’re also really funny and they have great personalities,” Eldridge adds. Further research let her to a 1983 photo essay that Mary Ellen Mark (Bell’s wife) did for Time magazine, showing the kids fighting, shooting up drugs, scrounging for food, and packing guns. Mark’s effort (with text by Cheryl McCall) was called “Streets of the
Lost,” and Eldridge loved the title. 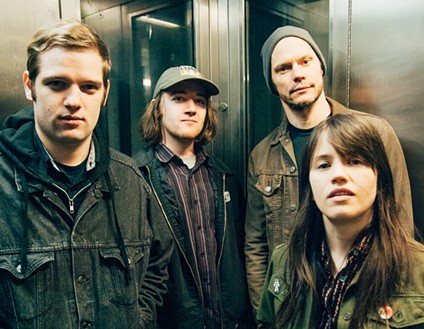 Paul Ridenhour, Jeff Ridenhour, Shane Kerton, and Kait Eldridge.
Photo by Steve Kong/Courtesy of Girlie Action
Of course, as a tough-sounding women spitting lyrics with  a guitar and a sort of shaggy haircut, Eldridge will inevitably always have comparisons to Joan Jett and Jett’s own idol, Suzi Quatro. She’s accepting of this, but hopes that the comparison doesn’t define either her or the band.

“Well it’s flattering because I’m big fans of both of them, but I also feel like our music and my songs are a bit more…they have more chord changes. And there’s other influences. I like Squeeze and XTC and hard rock like Blue Öyster Cult,” Eldridge says.

“But people will look at a picture of me or my hair that looks a little like Joan Jett – and she lives in the town I grew up in — or just hear the song without the chord changes and categorize it.”

Big Eyes’ current tour has them barnstorming the Southwest, and they’ll have summer gigs in the Midwest and Canada and (hopefully) dates on the West Coast and possibly Europe in the fall. But at the mention of Houston, she immediately brings up local punk rockers Something Fierce, with whom Big Eyes played with on their first Houston show in 2012.

“They’ve become friends of ours and I’ll never forget that first show we played with them,” Eldridge says. “It was our then-drummer’s birthday, so we got a piñata. We filled it with candy, but also those little plastic liquor bottles and maybe a little bag of weed. That was a lot of fun, and they made us feel very welcome!”

Big Eyes and Something Fierce play April 12 at Rudyard’s, 2010 Waugh.  Call 713-521-0521 or visit RudyardsPub.com Time and ticket price TBA.
KEEP THE HOUSTON PRESS FREE... Since we started the Houston Press, it has been defined as the free, independent voice of Houston, and we'd like to keep it that way. With local media under siege, it's more important than ever for us to rally support behind funding our local journalism. You can help by participating in our "I Support" program, allowing us to keep offering readers access to our incisive coverage of local news, food and culture with no paywalls.
Make a one-time donation today for as little as $1.