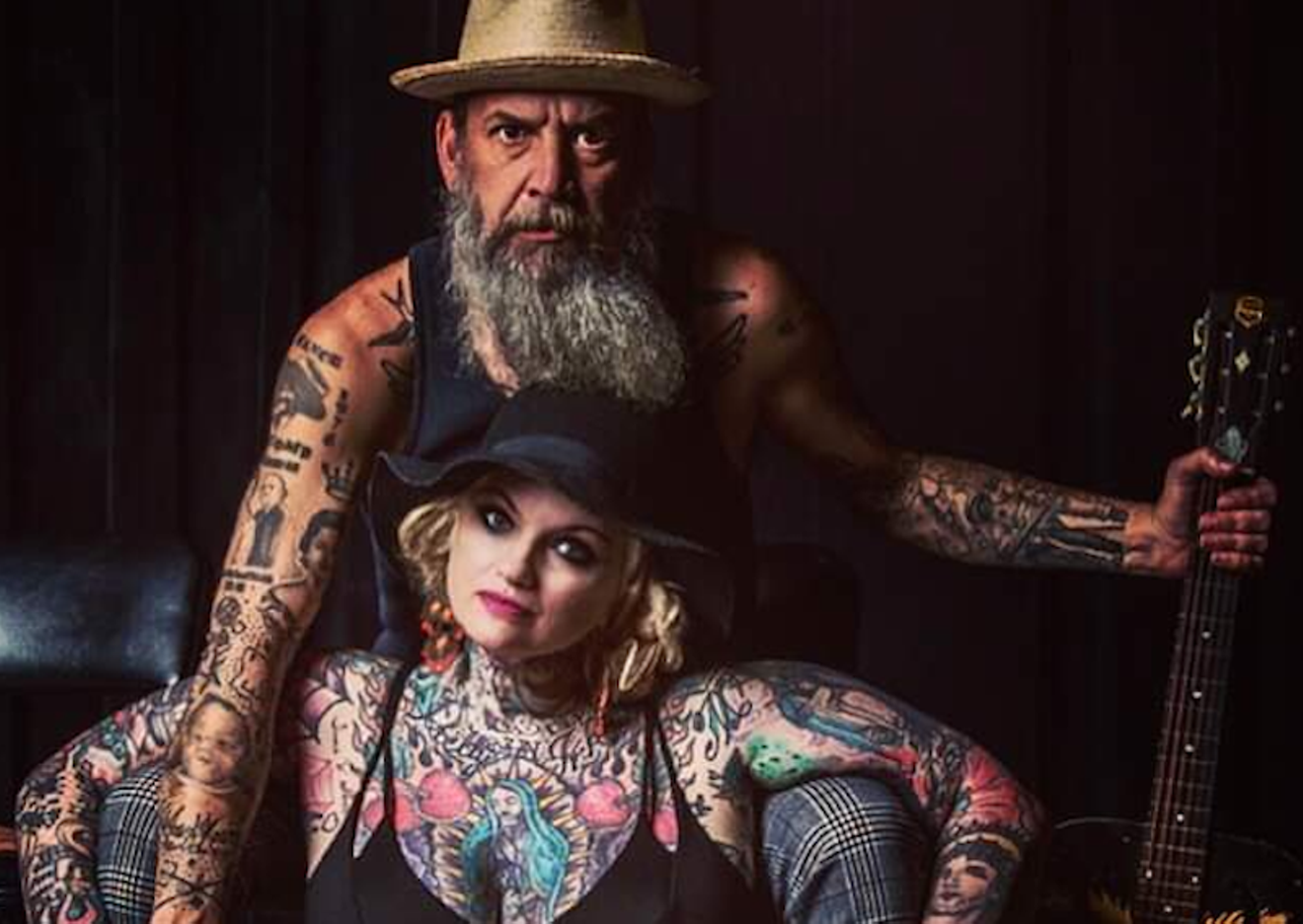 Black Lung Lucy returns to Houston to celebrate their album release show at Shady Acres Saloon on Thursday, April 15. Photo By Ray Redding Sr.
Shakespeare’s love sick Juliet famously philosophized, ‘What’s in a name?’ It was her belief that a name did not provide the actual characteristics of the noun, but in the case of Black Lung Lucy, the name packs a punch.

“She seems like a cool chick,” says Black Lung Lucy singer and songwriter Jennifer Wilder. “She would buy you a drink, maybe have your back in a bar fight and make you breakfast tacos.”

Wilder’s partner in life and in the band, D. Kosmo adds, “It’s Jenny’s alter ego, but Jenny has a lot of that dirt, grit and real life experience.”

Originally from Houston, Black Lung Lucy relocated to Clarksdale, Mississippi last year but will return to their hometown to celebrate the release of their first and self titled album with a performance at Shady Acres Saloon on Thursday, April 15.

It was a year ago that the two decided to pack up and move to another state, originally setting their sights on North Carolina but the universe had other plans when the duo described what they describe as fate “pulling” them to Mississippi.

If blues legend Robert Johnson sold his soul at the crossroads of the small but musically famous town to improve his playing, it’s only natural to wonder what deal Black Lung Lucy may have made with the man downstairs to create their unforgettable and cinematic sounds on the album.

“It seasoned us in a year,” says Wilder.  "Just a year in the Mississippi Delta has really flavored us to another level.”

Wilder’s voice naturally hits the sweetest notes ranging from angelic highs to mournful lows leaving listeners with no doubt to the truth of her stories. Kosmo’s gravely voice perfectly curls around her lyrics like smoke around an unattended cigarette.

“I compare it to a couple in the kitchen cooking together the same meal,” says Kosmo with Wilder adding, “It seems like it shouldn't go together but it does but we don't know any better than not to do it.”

This seems to be an accurate summation of their artistic flavors, just two people feeding off each other's energy and creating based on what they know. The sad yet uplifting songs of Black Lung Lucy are Wilder’s personal experiences and she is not afraid to provide real insight into her reality.

“I’ve lived a pretty hard life,” she says. “Lots of things; being orphaned, having children die, just random stuff. Whenever I write it’s just to express my personal view on how things have gone down in my life.”

Wilder uses her songwriting to release the past for herself but in doing so, she creates dialogue around issues others may have faced in their own lives, especially women. “One Thousand Men” paints a vivid picture of a woman who refuses to break despite the constant hits she is dealt.

When asked how it feels to be so transparent about her experience as a young orphan in the foster system, personal losses and other difficult topics Wilder answers quickly, “It feels awesome.”

“It feels like if I die tomorrow, I am eternal because I put out something permanent into the universe. This will live on past me and the songs are kind of dark and struggling, but they're also beautiful. They are about resilience.”

Black Lung Lucy began as a project shortly after the two began dating about four years ago. After watching Kosmo perform in his solo project, D. Kosmo, Wilder decided to share what she had written with him as she had amassed a large amount of songs in her life.

She credits Kosmo with helping her flesh out her songs and really bring them to life with her own voice saying, “I never planned on being a singer, I just wanted my songs out there.”

“That was hard at first, I used to get stage fright and cry a lot. Even when I watch the early shows it's kind of painful to watch because I didn't have any experience in what the hell I was doing, but I got it together and now I'm fearless.”

To record Black Lung Lucy the band started a Kickstarter campaign and got some help in the studio from Matt Patton from the Drive By Truckers as well as their Houston players WT Golden and Dave DaVegas.

Part of the beauty of Black Lung Lucy is that they can create their powerful sound with limited to no equipment, taking listeners back to a simpler time, but they can also plug in and play with a full band taking their rock and roll sound up a notch like in "Pink It Up!" Wilder describes how a majority of the album was recorded live in just one or two takes in the studio.

"I'm not a perfect person and these aren't perfect experiences. I like my songs to be a little piss, vinegar and grit.”

“We don't want to over think it and I don't want it to be perfect to be honest. I don't want a perfect song, that's just horrible," she laughs. "I'm not a perfect person and these aren't perfect experiences. I like my songs to be a little piss, vinegar and grit.”

For their Houston show, the band will be reunited before Wilder and Kosmo return to Mississippi to play the Juke Joint Festival back in Clarksdale. They consider their Houston album release show to be a thank you to their hometown and Kickstarter backers.

“We are really proud of this album,” says Wilder. “It’s a great beginning to whatever is to come for Black Lung Lucy.”

Black Lung Lucy is available for streaming and purchase now.  Black Lung Lucy will perform Thursday, April 15 at Shady Acres Saloon, 1115 W. 19th. Show at 8 p.m. Free
KEEP THE HOUSTON PRESS FREE... Since we started the Houston Press, it has been defined as the free, independent voice of Houston, and we'd like to keep it that way. With local media under siege, it's more important than ever for us to rally support behind funding our local journalism. You can help by participating in our "I Support" program, allowing us to keep offering readers access to our incisive coverage of local news, food and culture with no paywalls.
Make a one-time donation today for as little as $1.