Love the Sinners and the Sin: The Gospel According to Libby Lux 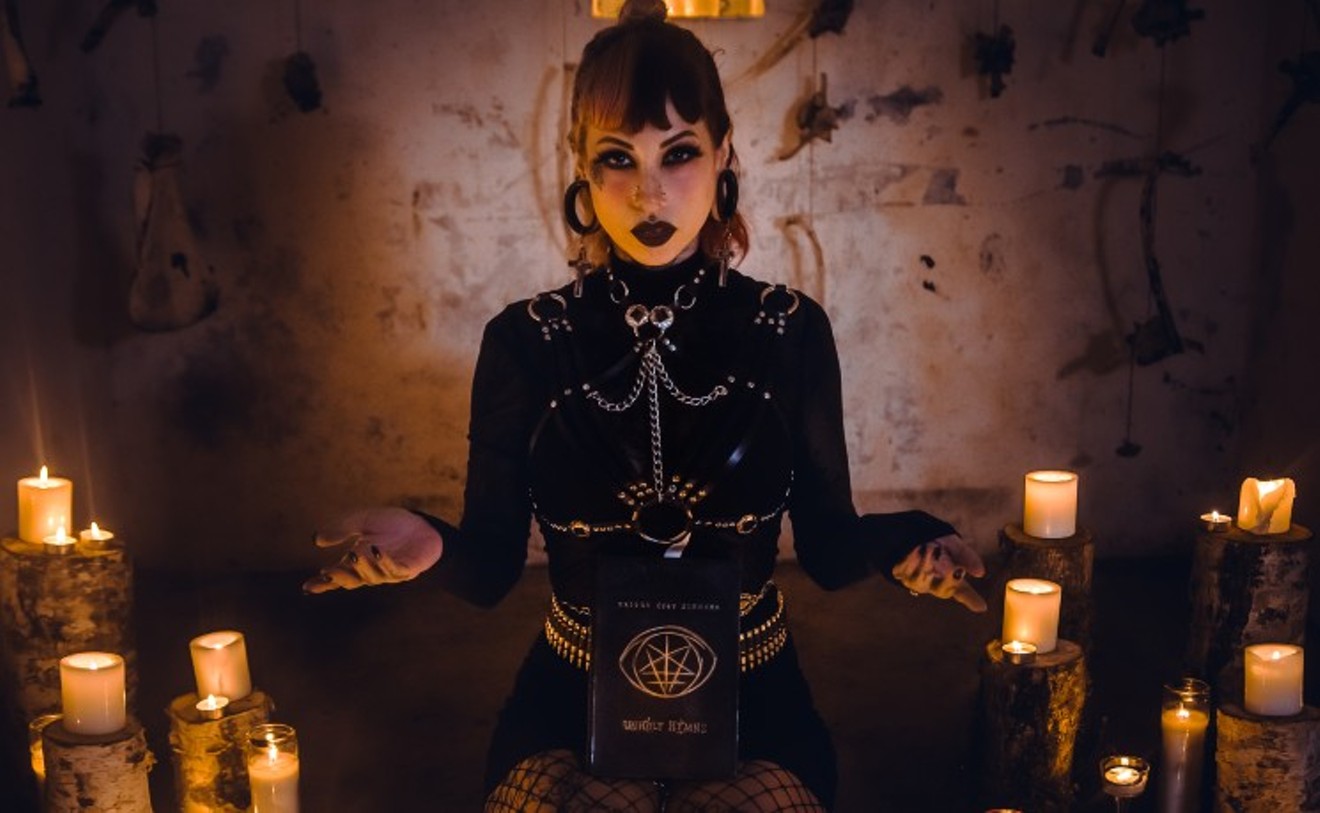 “Except for us because our last album did chart on Billboard! It did! Right above Now That’s What I Call Country 14,” Lux said with a laugh. “I agree, we all have a hard time kind of putting a pin in it. Definitely, we’ve had fun listening to the different ideas other people have. My favorite right now is ‘y’allternative.’ Like an alternative country kind of thing, like we’re going for a thrashgrass, yeehaw, goth kind of thing.”

As Lux mentioned, the music the Portland, Oregon-based band creates isn’t easily classifiable and that is surely part of its appeal, an appeal which has apparently grown large enough to have sent the eerie folk punk act, which releases albums on its own Flail Records label, to the attention of the most vaunted tabulator of music popularity. Fans who reside in Houston are expected to converge upon The Secret Group for the Sinners’ March 9 stacked tour stop with The Goddamn Gallows, Vic Ruggiero, Lauren Napier and Holy Locust.

Ahead of that show, we picked Lux’s brain about the band’s growing following, its latest album, Unholy Hymns, and the group’s origins.

“In the beginning, we were really just like a busking band. We got together from Craigslist. I was probably in the most depressing, heartbroken state of my existence and I kind of got to this point where I was like ‘I wanna be happy again. And to get happy again I really need to get back to some things that made me happy and what was that?’ And then when I sat down and thought about it, it was music,” she said. “Music made me happy, it made me feel like me, it made me feel like I had something to offer to others and it made me feel visible again when I had felt invisible for a while.”

Lux had already been a veteran busker, a pursuit she began at age 19. On Craigslist, she found an ad and followed it to an open mic where some of her future bandmates were holding court. They decided to team together to hit the streets.

“It was really just for fun, you know, like to get some beer money and hang out with my friends and then we realized people were enjoying what we were doing. We had someone who had a little video set up in their basement so we did a video just for shits and giggles and it went viral. And so it was like, well, I guess we should do this for real.”

That meant writing original material, songs with a decidedly sinister edge. It meant booking shows, touring and just doing everything on an organized and grand scale. Everything emanated from the band’s skilled musicianship, talents that had been honed to individual perfection and pulled together. Lux plays banjolele. Her oldest friend in the band, Scott Michaud, is its upright bassist. Clyde McGee is the group’s banjo player, Lightnin’ Luke is on fiddle and Michael Sinner rounds out the quintet on resonator guitar.

Most of the band’s members have their own music projects and Michaud runs the label. They only banded together in 2016, so it’s wild to hear how cohesive they are on record. Lux said Unholy Hymns is a good representation of those individual aptitudes all pulled together.

“I think it really kind of touches a little bit of everybody’s background. Like our fiddle player was raised on classical music, started playing fiddle when he was like five, you know? Our banjo player has been busking and really into traditional folk music for a really long time. Me and Michael come from a more punk background, so it’s kind of a little mashup of everything,” Lux said. “When I first started playing music I wanted to play punk rock. I lived and breathed punk rock so that was my goal. And then, when I picked up an instrument, it just didn’t come out like that. I think over time it’s been just trying to find that edge that I do have and finding comfort within that.”


Lux has also gotten comfortable with growing the Sinners’ audience by way of the Internet. It’s a bit of a juxtaposition, using the latest in computer technology to present these traditional acoustic music styles, but it’s been key to taking the band from Pacific Northwest street corners to stages at the Bluegrass String Summit, Muddy Roots Festival, Florida’s The Fest and Punk Rock Bowling.

“Like thank you, the World Wide Web! It brings people together,” Lux noted. “If we were still just busking on the street, people would only be able to appreciate us because that’s where they were. The Internet seems to be bringing out a lot more people who are not necessarily familiar with this style of music at all. I can’t tell you how many people have come up to me at shows and have been like, ‘I’ve never danced like that,’ and I’m like, ‘You’ve never been in a mosh pit? Ever? That blows my mind! But I’m so happy to have you here, I’m so happy to do that for you.’

“It’s like a 50/50 crowd,” she said of the Sinners’ expanding following. “Half of them will stare at us like we’re zoo animals, just jaws on the ground, or they’re thrashing around having the time of their life. But even the people who have jaws on the ground, as soon as we’re done they’re hooting and hollering and clapping. I think it’s just a lot of people haven’t had the chance to experience this kind of performance before.”

It is hard to train one’s eye on any given thing in a Sinners performance. If you love the fiddle, you may be entranced by Lightnin’ Luke, who’s likely to rip off his shirt at any given moment. Maybe you’ll get fixed on Michael Sinner’s punk rock snarl or Clyde McGee’s steadiness or Scott Michaud’s relentless thumping along on stand-up bass. But, probably you’ll be mesmerized by Lux, the commanding centerpiece onstage. Her demeanor can flash from comely to uncanny depending on the song, belting out lyrics about witches, trolls, Hell and the Devil himself.


Like other Billboard-charting acts, Bridge City Sinners has a busy 2022 planned emerging from the pandemic. Lux said the band has tried a few tours since COVID but “this year is booked. As long as everything goes to plan and the world allows, we should be going to the U.K. in July and we have a handful of shows booked in Italy and Germany. I’ve never actually been across the big old ocean like that. I’m really excited.”

She knows fans will be excited, too. We asked if it’s surprising to her that these traditional forms of music have a place among the electro-techno autotuned artists of the day.

“With the Internet being such a blessing and a curse, I think it’s kind of giving people a place to stand and pick their own music. Whereas before, we got things handed to us in a pretty package, like Now That’s What I Call Music. It was all picked out for us and we were told what to like,” she said.

“Now, with the Internet, it really is making labels take a look at bands they wouldn’t have before because the numbers are there and they can see for themselves that people enjoy it. Even bands like Mumford & Sons recently. Those are folk instruments we hadn’t seen and heard from for a long time and that was able to make the charts and make it on the radio. I think that there is a little path that’s being paved for this little subgenre weirdo.”

As alluded to before, the band’s subject matter is often dark in tone. We live in a world inhabited by sunlight and shadows and within us all we have these dueling forces. We ask Lux if she thinks it’s okay for us all to embrace the sinner in ourselves.

“Yes, because life is about living and I can’t imagine living it by someone else’s rules,” she said. “I think we should all really indulge in life and in experience as long as it feels good and you’re not hurting anybody. That’s my perspective. I think that entertaining that part of you and letting yourself be a little wild, I think that that helps to tame the beast.”