Bruce Robison and Kelly Willis Take Us Back to the Astrodome 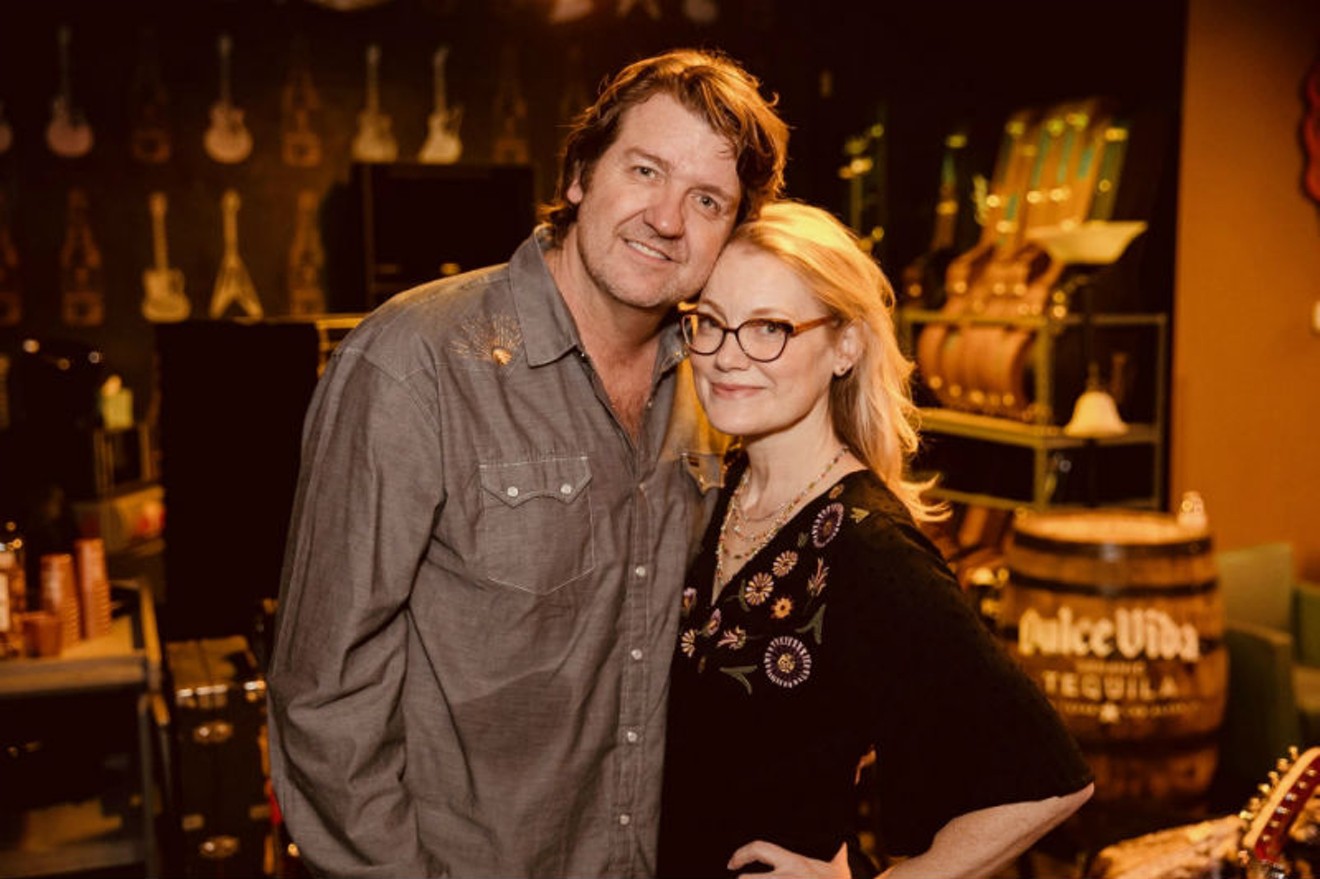 Many songs are about the people who make our lives special, but sometimes songs about the places we’ve known and loved stir strong emotions. If you live in Texas and are of a certain age, it’s guaranteed that’s what’ll happen when listening to “Astrodome.” The new song is from Beautiful Lie, the upcoming album by Americana power couple Bruce Robison and Kelly Willis.

The song also boasts its own short film which debuted last Friday in Houston at a Texas Monthly LIVE event. Robison performed the song live, with its poignant video featuring archival clips of the “8th Wonder of the World” flickering over his shoulder. Robison explained why he and the song’s co-writer, Houston’s own Jack Ingram, penned a musical homage to the ‘Dome.

“That was such a magical place for a few different generations of Texans and I guess it really did bum me out to see it there, sitting empty, and hearing about it just being derelict,” Robison said. “I mentioned it to Jack Ingram and that was really the thing that moved it forward. We tried to write it a couple of times but we just couldn’t get going on it. But, he was always telling me, ‘We gotta write that song!’”

Robison said they traded notes. He talked with his wife about the song and even Ingram’s wife Amy weighed in until they eventually puzzle-pieced the song together. He likened the vintage Astrodome days to hanging out at the community center in Bandera. The veteran singer-songwriter hails from the “Cowboy Capital of the World” and now resides in Austin.

“Although the community center from Bandera would only hold 150 people, the crazy crap that they had in the Astrodome, and how magical it was, and all the times that I went and all the different things that I saw like demolition derbies and carnivals and circuses and baseball games and everything else, it was such a magical thing and such a point of pride for us.”


Robison said once the song came together, people who were as ambitious as he was about it loaned their talents to the short film. The film’s artist created a storyboard that sent Robison combing the coffers of The Next Waltz, his label and multi-platformed production company, to fund the project. A friend, director Jeff Nichols, agreed to direct and obtained the archival footage that’s sure to send viewers down memory lane. His work includes the critically-acclaimed films Mud, Midnight Special and Loving.

The song and film drew robust applause at the Texas Monthly show and Robison hopes listeners will be just as enthusiastic about the rest of Beautiful Lie. The fourth album of duets from Willis and Robison releases June 21.

“It’s pretty streamlined,” he said of their recorded collaborations. “I just feel like I need her and she doesn’t need me. Like, I love her records and she’s got a great sound and she made a record last year. But I’m much more, these days, just motivated by the stuff that I do with her. I feel like we have a real sound whenever we’re singing together. That’s kind of what’s most gratifying to me, is the stuff that I do with her, both gigs and the recordings. So, I’m kind of pushing that.”

Robison and Willis are accomplished songwriters. They’ve had their own hits and their songs have been chart-toppers for Dixie Chicks, George Strait, Tim McGraw and others. Robison’s siblings are Charlie Robison and Robyn Ludwick, also expert songwriters and musicians. So, it’s interesting to hear Robison say one of the most notable things about the new album is how much of it was written by someone else. The album opener, “If I Had a Rose,” was written by Nashville songwriter Adam Wright.

“I discovered that song just as a guitar-vocal, they weren’t paying any attention to it and we sang it and I just thought it’s the kind of song I love and that I wished I wrote,” Robison said of the track, which he says quickly became Willis’ favorite to play live. “I don’t write songs like that, that are very simple but just beautiful, kind of like the songs that my heroes used to sing back in the day.”

“We did that one and then I ended up finding three or four other tunes that are also his songs. Starting with ‘If I Had a Rose’ really just gave us the momentum where we thought we really wanted to make a record that had something different to build around and that had a vibe. We were always looking for different things that would make up an interesting record,” he said.

The album doesn’t drop until next week, but Willis and Robison are already playing summer tour dates, including shows in Tomball this weekend and at Discovery Green at the end of the month. These summer shows have become a routine part of their calendar, a sensible counterpart to their popular annual Holiday Shindig at Christmas time.

“The response has been great, it really is fun to have new music to play and it’s different too when they’re duet-y and we’re able to have that singing be the center part. It’s just really a lot of fun. I mean, anybody who’s reading this, if they had a real singing partner, it’s the best thing, you know, somebody who makes you sound so much better than you are on your own,” he said with a laugh. “She makes me so much better and I really do look forward to the things that we do together so this little summertime trip is just so much fun and the music is so good.”

Speaking of good music, Robison and his family have created plenty of it.

“It’s been such a great thing. I believe me and Charlie and me and Kelly moved each other along and we’re a big part of each other’s careers, although we always saw ourselves as our own artists,” Robison said. “A lot of people think that we’re sitting around playing at holidays, and that doesn’t happen that much, you know, when we get together, and my sister’s a great songwriter - but we’re very normal, because that wasn’t part of our upbringing. Me and Charlie didn’t even get into this until we were in our mid-20s.”

His kids are now teenagers. Have they expressed any interest in the family business? He said he and Willis are letting the kids find their own path to whatever they choose to do. So far, it doesn’t seem to be music.

“I think I asked one of my kids, god, when they were six, ‘You think you’re gonna be a musician?’ It was my daughter and she said, ‘Oh no! With the people and the autographs? Oh no!’ That was all she could see of it, but that just made me laugh, even in our little world and the level that me and Kelly are at.

“I hear the piano going downstairs right now as we speak,” he continued, “but we’re really kind of letting that find its own level. It’s an interesting question, I wonder what the answer to it is myself because I worry. Starting out in music right now, good God, it was so much better even when I was beginning. I don’t even know how people get noticed or what they do now.

“It was such a long shot, but I was so proud of what I was able to do – going to Nashville and sleeping on couches for 10 years and getting that going. I have friends ask me about publishing now and I’m like, dude I have no idea. Good luck, you know? I don’t know how you get on the radio at this point, I don’t know how you make money and it seems so rough out there to make a name for yourself.”

He and Willis have made names for themselves and, he said, it always comes down to songs.

“We just look for songs that we sing well together. The music just always shows the way,” he said. “That’s the cool thing and what I enjoy about singing with Kelly. You know, I can bring in 25 songs that I’ve written and then we sing together and either it works or it doesn’t. ‘Astrodome’ was that way and that song ‘Coming Down,’ – we just never know until we get the guitar out and sing and, you know, there’s that little bit of magic. You never even know when it’s gonna happen.’”

Bruce Robison and Kelly Willis perform Saturday, June 15 at Main Street Crossing, 111 W. Main in Tomball. Doors at 6 p.m., $35 and up. The duo plays UHD's Thursday Concerts series at Discovery Green on June 27. All ages, free.
KEEP THE HOUSTON PRESS FREE... Since we started the Houston Press, it has been defined as the free, independent voice of Houston, and we'd like to keep it that way. With local media under siege, it's more important than ever for us to rally support behind funding our local journalism. You can help by participating in our "I Support" program, allowing us to keep offering readers access to our incisive coverage of local news, food and culture with no paywalls.
Make a one-time donation today for as little as $1.