Cactus Flowers Hopes to Cast an Enchanting Spell with Incantations

Just days before her band celebrates the release of its new album, Jessica Murillo considers what’s been most challenging about the process of creating the first-ever Cactus Flowers LP.

Was it writing the nine tracks on the record? Nope. Murillo said the music is a collection of songs she’s written over time, as far back as ten years ago and as recently as two weeks before recording began. Was it giving the body of work a name? Not really. The album is titled Incantations and Murillo explains, “Each song is an incantation of itself, a mantra hoping to invoke, conjure and inspire growth outside and within.” The band allowed each song to work its own magic. They began work on the record in October 2018 and will present the finished product to fans at a Cactus Music in-store performance Saturday afternoon ahead of the official release show at Cottonmouth Club later that evening.

“Releasing our first album, and our first vinyl, has been one of the most fulfilling experiences of my life,” Murillo says matter-of-factly. “The most challenging process was everything that comes after the music is finished being mastered. Finding the right artwork, layout and design, finding someone to press the record, edits and proofs. Our producer, John Griffin, had told us what typically holds up most album releases is art and design and boy, was he right.

“Since we knew Incantations was going to be a self-released album, I found myself wearing all the various different department hats, but surprisingly enough everything came out perfectly planned,” she continued. “We could not be happier with our end product and it just makes this process and project even more special because it is a true collaboration of art and music.”

Murillo has recently leaned hard on her background in music management and entertainment law. Getting the final product into the hands of music listeners is important because she’s proud of the work she and drummer Mark Carcamo did on the record. Carcamo’s been the yin to Murillo’s yang, keeping the beat beneath her fuzzed-out, psych rock leanings. Of late, the group’s added Houston music legend Chris Dunaway to the mix on bass. Murillo said his inclusion in all things Cactus Flowers has sparked so much creative energy the lineup has already completed a five song follow-up EP to Incantations with Griffin (Wild Moccasins, The Tontons, Flower Graves) once again at the helm.

“Chris Dunaway in the studio is a true pleasure to work with and his ability to adapt to new styles and create beautifully layered bass lines completely help each song come to life. We're so excited about our new songs and sound that we've started playing some of them live,” Murillo noted. She said the EP does not yet have a title but fans should “definitely expect fuzz and sludge songs paired with some psychedelic pop and rock.”

The future may be exciting but we reel back to the present to discuss its big news, namely the album’s first video and the album release events. The video, for “I See in Auras,” released on Monday. Murillo said the clip was shot by Alec Lasar, who also filmed the band’s video for “Turquoise Prince” from last year’s EP.

“I happened to be at this location outside of downtown Houston taking photos for my sister's wedding and I knew instantly that I wanted to do a photo shoot or music video there. Incorporating places around Houston has always been very important to me when doing photo shoots or videos,” she said. “I wanted the concept just to be a straight-up rock and roll video of the band with some auras coming in and out of the video and I think Alec nailed it spot on.”

This Saturday’s live shows begin with a 1 p.m. performance at Cactus Music.

“This will be our second time playing at Cactus Music, but it will be such a treat to play in an actual record shop where you can go to the floor and actually find our vinyl for sale. Moments like these will never get old or not treasured, so we are excited to rock out and celebrate our album with new fans,” Murillo said.

Cottonmouth Club hosts the official release event Saturday night at 7, in its upstairs space, which is usually reserved for private events and overlooks the Main Street red line. Murillo said Cottonmouth Club is one of her favorite bars and has long been supportive of the band, as has Noah Edmundson, the mixed-media artist and longtime curator of the Art Car Museum. Murillo considers Edmundson her mentor. Last year, he hosted Cactus Flowers’ EP release in one of his warehouse spaces and he’s showing pieces from his Lost Worlds exhibit at this Saturday’s release show. Murillo said the new album’s art is from that exhibit.

“At the party on Saturday, some of the pieces will be on display and for sale so that our fans can get a submersive experience of the invoking spirit of our record Incantations,” she said. 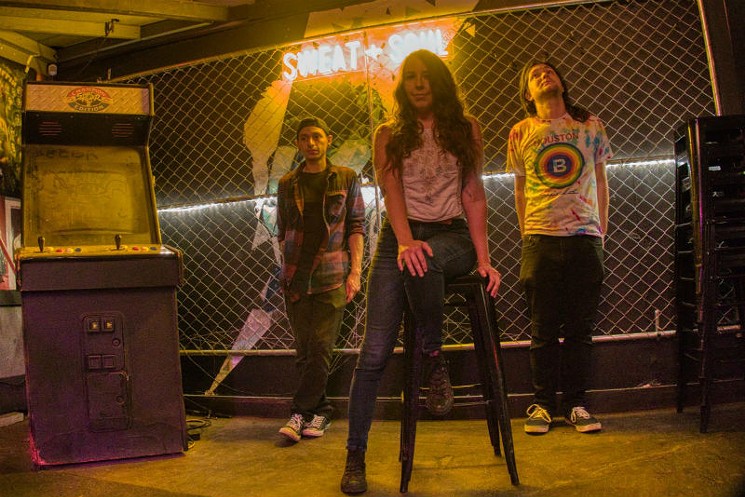 Ak'chamel: Giver of Illness opens the show, followed by Split Pistols, an Austin band by way of central Pennsylvania, which is making its Houston debut. Cactus Flowers hits the stage at 9 o’clock, will play Incantations in its entirety and will close the set with “Razorblade,” a track from the upcoming EP, to give listeners a glimpse of what’s to come.

As for what’s to come more immediately, Cactus Flowers has a busy schedule of shows ahead. Beyond this Saturday’s festivities, they’ll play the annual BowiElvis Fest January 11 at Continental Club. They’re on a January 16 bill at Devil and the Deep Brewery in Galveston featuring Paranoid Void, a Japanese math rock trio making its U.S. debut that night. They have a February 12 date with Third Man Records artists Olivia Jean (The Black Belles) at Dan Electros.

With all the fun work of creating the album (and all the hard work of promoting it) fading further into the rear-view mirror, we asked Murillo what it would take to consider the album a success.

“Incantations is definitely a success already in its own right,” she said. “Even more special is seeing listeners all over the world streaming the album. I guess the only other thing to make it a complete success is if we sell out all 250 copies. Since we are a self-released band, those little victories make everything so much worthwhile, and, hey, we already have sold 50 plus.”

Cactus Flowers celebrates the release of its debut LP Incantations with two shows Saturday, December 21. Cactus Music, 2110 Portsmouth, hosts a free 1 p.m. in-store performance. The official record and vinyl release event begins at 7 p.m. at Cottonmouth Club, 108 Main. Ak'chamel: Giver of Illness and Split Pistols open the show. $5.
KEEP THE HOUSTON PRESS FREE... Since we started the Houston Press, it has been defined as the free, independent voice of Houston, and we'd like to keep it that way. With local media under siege, it's more important than ever for us to rally support behind funding our local journalism. You can help by participating in our "I Support" program, allowing us to keep offering readers access to our incisive coverage of local news, food and culture with no paywalls.
Make a one-time donation today for as little as $1.