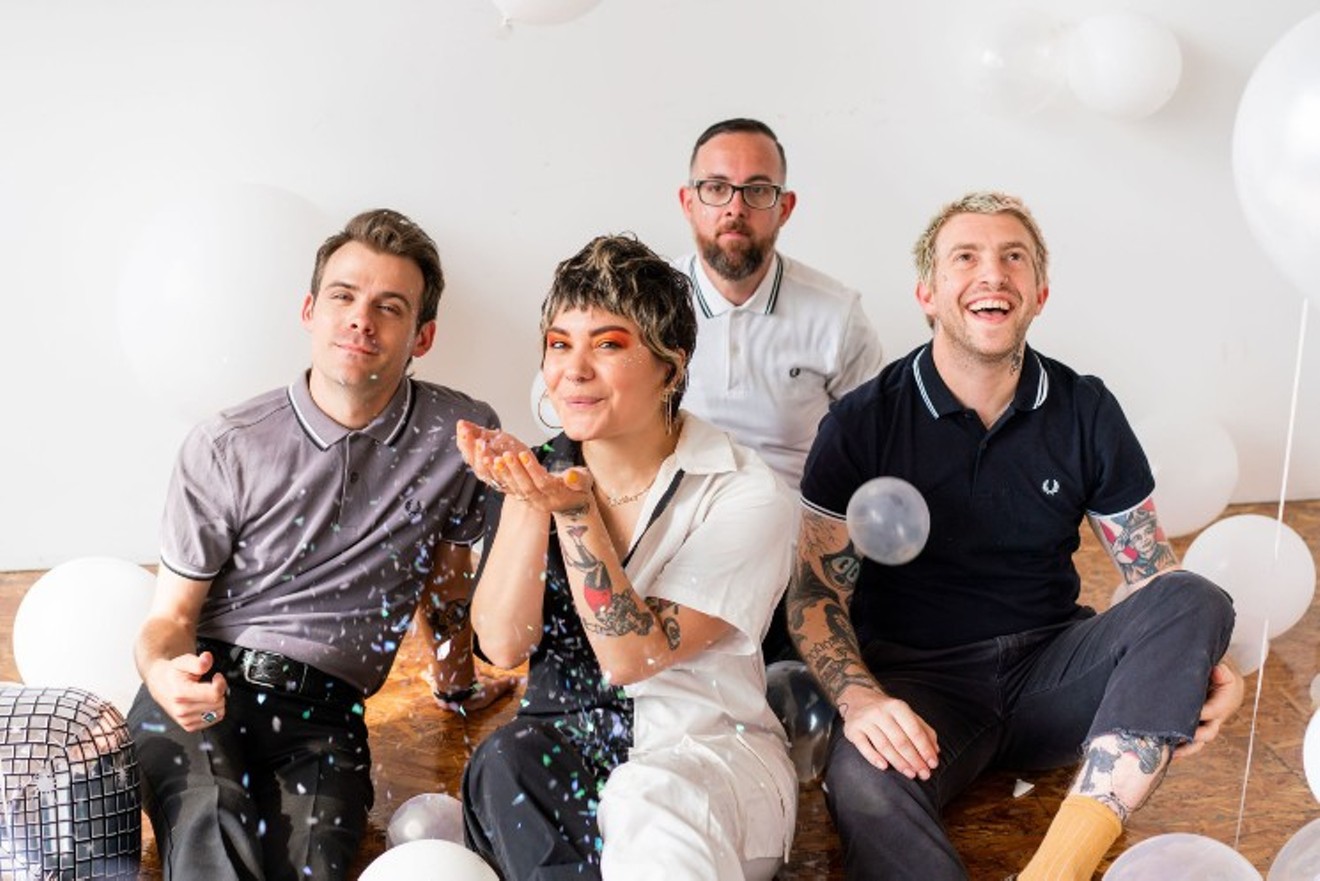 Catbite Photo by Caity MacLeod, courtesy of Catbite
Catbite isn’t your dad’s ska band (by the way, if your dad has a ska band, congrats – cool dad!). They may not even be your older brother’s ska band. But, they are a band everyone can enjoy and they’re leading yet another wave of ska into the musical zeitgeist.

If you’re not familiar with the Philadelphia-based quartet, you can see what they do live this Friday at Warehouse Live when they open for their tour mates, the legendary Streetlight Manifesto. If you’re wondering whether Catbite is for you, consider this – they possibly are the only ska band in existence to cover Selena. We asked Brittany Luna, the band’s lead vocalist and frontwoman, how and why a cover of the Queen of Tejano’s classic “Bidi Bidi Bom Bom” found its way onto the band’s stellar 2021 album Nice One.

“I’m Latina and I grew up in South Florida. My dad was always playing music very loudly in the house and a lot of it was Hispanic music, so it’s something that’s a part of me and I really loved Selena as a kid. And I loved the movie with J. Lo,” Luna said. “On each album we’ve decided to do a cover and I chose this one just because I feel like a lot of times people see me and I guess I’m kind of white-passing as a Spanish person so I kind of wanted to make that statement of like, ‘Hey, I’m Latina and I’m proud and I love Selena and I hope you do too.’ I think a lot of people took very well to it.”

Including Luna’s husband, Tim Hildebrand, the band’s guitarist and manager. Hildebrand was born in San Antonio but grew up in Pennsylvania. Even though he got his start in Texas, Hildebrand admitted he wasn’t familiar with Selena.

“I’d never heard of her and then me and Britt started dating and she showed me,” he said and acknowledged he got chastised a bit by Luna who suggested, “Yeah, this is the most, greatest artist of all time, how have you not heard this?”  He attributed his unawareness to growing up “in Bumblefuck, Pennyslvania.”

“Putting this on the record and thinking about it was kind of like (thinking) white people are going to be listening to this and it may kind of just open their eyes that there’s more than just music from western Europe and the USA. Just because it’s a different language doesn’t mean you should not listen to it. They’re these great friggin’ songs,” Hildebrand said.

That notion is a part of Catbite’s ethos, an ethos driving the current resurgence in ska music. Along with bassist Ben Parry and drummer Chris Pires, the couple is leading a charge of bands that feels more inclusive. Acts like Catbite, The Interrupters, We Are the Union, Skatune Network and Houston's own Fuska are giving female voices, queer voices and people of color a bigger role in the genre. Catbite formed just a few short years ago, in 2018, so we wondered whether the band’s biggest priority is some obligation to growing that inclusiveness or simply making the best music possible.

“I think we are definitely all people who are looking to lift anybody in a marginalized group,” Luna stated. “I’m Latina and I’m bisexual and I’m a part of some of these groups. I think maybe we don’t always write music specifically about that stuff but as people we are very much political people and we’re never just going to stay quiet and watching things happen in front of us and let things just go without stating how we’re feeling.”

Hildebrand learned to play guitar to join a high school friend’s band. He said his obsession began with Rancid and The Clash and he “fell down the wormhole of all the traditional stuff and where they got their influences. We just got really into ‘60s ska and reggae and rocksteady and two-tone stuff.

“I’ve pretty much only been playing ska since I picked up a guitar and I got into it right when no one else was listening to it. And, I left that band because we were starting to not play ska anymore. A couple of months later me and Britt were like ‘I think it’s time that we start a band together and we should just do a ska band.’ That’s kind of the scene I grew up in.”

“For me, I didn’t actually grow up listening to ska music, I kind of got into it later in life,” Luna said. “I went to school for music and I studied classical, I studied jazz. I think when I started really listening to ska music I kind of felt a connection to it whereas I hadn’t felt that connection with the other styles of music that I’d listened to. I’ve always known I wanted to be a working musician, I wanted to make that a career and playing ska music is where I feel most comfortable and the happiest onstage.”

That joy creates an enticing stage presence for Luna, who also is gifted with a strong voice. Coupled with Hildebrand’s years of experience, it’s no wonder Catbite is gaining momentum.

“I would say that things are kind of moving pretty quickly,” Luna shared. “When we put out our album last year it felt like we were kind of on the up and up. Just in the last couple of months we’ve really been able to do a lot of shows. We toured the whole month of June with Jeff Rosenstock and got to play a bunch of cities that we’d never played before for people who had not maybe listened to our band before. It does seem like it’s ramping up a lot, which is really cool and exciting.”

“I definitely agree,” Hildebrand added. “I’ve been playing about 12, 13 years in ska bands. My old band, we were doing the damn thing. We toured and nothing really happened. As soon as we started this band, everything has really fallen into place. I guess it’s just the fact that everyone in this band has done the work to lay the groundwork for this band.”

Hildebrand added, “People are really getting into ska the same time that we’re here and the scene keeps growing and growing.”

It’s important to any music genre to add new blood and Catbite’s gotten some notice and support from their ska music predecessors. They were tabbed for a split with Mike Park, head honcho of Asian Man Records, and just released a video for “Everybody Talks,” one of the songs on the split. And, of course, they’re getting a chance to grow their audience on this run with Streetlight Manifesto.

“It’s just such an incredible opportunity,” Hildebrand said and noted that Catbite did some support for Streetlight Manifesto last year. “It’s just unreal. There’s so many people that love that band and those people are cool and really dig our band. So yeah, every single show has just been really good.”

“It’s been so good,” Luna reiterated. “Streetlight fans are such hardcore Streetlight fans, so to be able to win over some of their fans, I feel like we’re making forever fans of Catbite, which is really, really awesome and makes me hopeful that we’ll be able to keep this band for awhile.”

L-R: Parry, Luna, Pires and Hildebrand
Photo by Caity MacLeod, courtesy of Catbite
“Tomas (Kalnoky) is such a sweetheart. It means a lot that he likes us and brought us on tour because he has kind of a reputation for not bringing ska bands on tour which is kind of wild,” Hildebrand said of Streetlight Manifesto's lead singer and songwriter. “I honestly can’t remember the last time they took a ska band out for tours.”

“I’ve also heard he likes certain music and there’s a lot of music that he doesn’t like and a lot of bands that he maybe doesn’t like so much,” Luna added. "He actually does like our band and our music which is really, really cool just because he’s such a talented person, it’s awesome to have someone like that say ‘Hey, I like what you’re doing.’”

We suggested many people are saying that about Catbite these days. They’re moving up fast through the ranks and why not? The songs are solid. The band is tight. They’re representative of a more inclusive wave of ska. They’re a fun follow on social media – no publicists, they stay true to the DIY ethic and do it all themselves. Their frontwoman is especially engaging and has especially good taste in Tejano music. It’s only a matter of time before we see them rocking the stage on late night TV, we suggested. Maybe Colbert or one of the Jimmies? That would give this new wave of ska even more of a spotlight than it’s already enjoying. What will it take to keep that spotlight growing wider? Luna's answer aligns with the ideas behind ska's newest wave.

“I think some people that are in the scene just need to kind of stop gatekeeping. I know there were a lot of people that were upset about The Interrupters being on these late night shows and I think it’s silly because they’re showing people that ska music is great and introducing lots of people to ska, so I feel like it can’t be bad,” Luna said. “You have to support people. I just never find why some people, the negative energy that they bring, and they bring it on other people — it just never makes sense to me to be that way. I’d rather lift my friends up and be supportive and be happy. I love when my friends are doing something cool and being successful and making art that they really love. It makes me really happy to see.”