The Chris Robinson Brotherhood is: Tony Leone, Jeff Hill, Chiris Robinson, Neal Casal, and Adam MacDougall Photo by Jay Blakesberg/Courtesy of Calabro Music
Somewhere near Santa Cruz, California, Chris Robinson is in a car hurtling down the road en route to play a gig with the Green Leaf Rustlers, his side-project classic country cover band. And he hopes that he can keep the phone connection.

“If I lose you, I’ll call you back!” the singer offers as I can hear the sound of tires moving and wind whistling over the phone line. “I live in rural west Marin county and the cell coverage…it’s a nightmare! My girlfriend and I, we’re in the process of moving, and we’re going down to Santa Cruz and I’ve got these Brotherhood gigs…it’s like a hot fudge Sunday of bullshit! But that doesn’t include this interview!”

The “Brotherhood” he speaks of is the Chris Robinson Brotherhood. The band he fronts with Neal Casal (guitar), Adam MacDougall (keyboards), Tony Leone (drums), and Jeff Hill (bass) are about to embark on a three-month U.S. tour. They are simultaneously finishing up their seventh studio album in eight years for release early next year, as well as the the fourth volume of Betty’s Blends, their ongoing series of live records of different shows put together by former Grateful Dead engineer and archivist Betty Cantor-Jackson.


If that seems like a lot of output on the Silver Arrow Records, that’s perfectly fine. Robinson has a lot of leeway, since he owns the label.

“I’m the head of the company, so we’re allowed to do a lot of cool shit. And that’s amazing for a band without big hit records or a big history to have this loyal following. The [traditional] music business is done.” he offers.

Part of that freedom also allows the Chris Robinson Brotherhood to follow their musical muse into whatever genre feels right to them at the time. In fact, their records are something like Forrest Gump’s box of chocolates. One can open with a straight up rock song, followed by a psychedelic tune, flowing into a country romp, ending with a funk workout.

It’s a diversity that Robinson feels, frankly, more bands should embrace, before showing just how varied his own musical tastes are and have always been.

“We find inspiration through the lens of traditional American music forms, and that’s my musical consciousness and those of the people around me,” he offers. “Gram Parsons coined the term ‘Cosmic American Music.’ And the Band were mostly from Canada, and look what they did! There’s a lot of other examples, like ‘Exile on Main Street’ by the Stones and ‘Sweetheart of the Rodeo’ from the Byrds. I mean, I could listen to Echo and the Bunnymen and Bob Dylan and Lester Flatt & Earl Scruggs and Eric Dolphy all in the same day!” 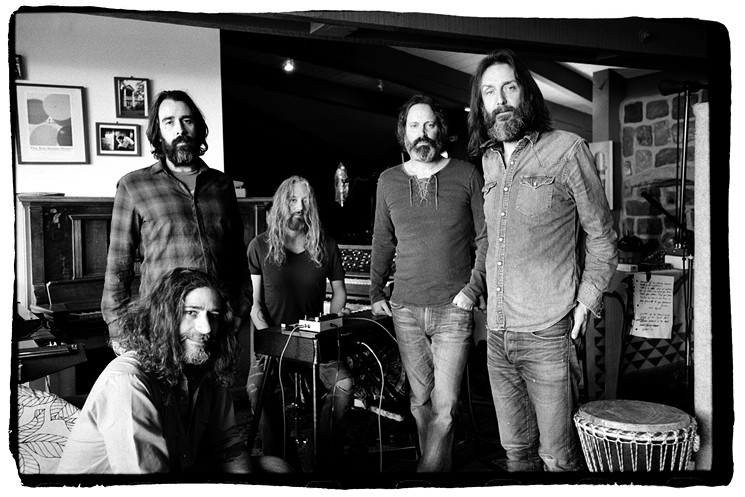 Photo by Matt Mendenhall/Courtesy of Calabro Music
He adds that there’s no agenda and no manager begging them to put more “riff rock” on a record, and the only people they have to please are themselves. “I know that sounds self-indulgent, but that’s good,” he says. “We don’t want to be a band that waters down our vision and talent because if we do, fame and fortune will await!”

Robinson also takes a very keen, hands-on, and “obsessed” approach to graphics and art from album covers, posters, videos and merchandise down to guitar picks and tour laminates. He said having a hand in this aspect of a band’s image and presentation is one of the reasons he chose music as a career path, and fans have responded heartily. “We want to create a world,” he says. “We’re not just selling a product.”

The CRB lineup has been stable for a couple of years now, and when asked what about the strengths of this particular quintet, Robinson is quick to answer. “Everyone likes a lot of the same things. Adam has a twisted sense of humor in his play, Neal comes from a meticulous and melodic place, Tony’s a jazz drummer, and Jeff has a funk and jazz vibe,” he says. “As for me, I’m all over the place. I have a different energy. But we’ve played thousands of hours together now.”

The Black Crowes burst out with their 1990 debut "Shake Your Moneymaker." L to R; Chris Robinson, Johnny Colt, Jeff Cease, Steve Gorman, and Rich Robinson.
Album cover
If that’s the case, the Robinson has likely logged hundreds of thousands of hours playing with the Black Crowes, the highly successful band he co-founded and co-led with brother Rich Robinson. But an acrimonious dispute over business seemed to bust up the band for the possible final time a few years ago. By some published accounts, the brothers haven’t even spoken to each other in nearly five years.


But the Black Crowes fanbase are a very dedicated and faithful lot, and last year Rich Robinson got together a few former Crowes and some new players to form the Magpie Salute, going on the road to play an amalgamation of Crowes songs, new material, and covers. They just released their second album.

Earlier this year, Chris Robinson gathered a different group of former Crowes (including guitarist Audley Freed) and collaborators to do a short tour under the moniker As the Crow Flies. It stemmed from a lunch that Robinson and longtime friend Freed had in Nashville last year.

“We hadn ’t really played together in awhile, so we tried it. We got people including Andy [Hess, former Crowe] and Marcus King. Marcus is going to be a massive guitar hero and star in a few years,” Robinson says. “But it was fantastic to see the joy with the people, and we did amazing business. I had a complete and utter blast. Everyone left as better friends and wanting to do it again, and hopefully, we will.”

And hopefully, Chris Robinson will sit down and write a book one day – just not quite yet. “I just want to see where this second act leads me. It’s in my mind and it’s been talked about. And I love Patti Smith’s books and the one by Gong’s Daevid Allen that aren’t so flat.” he offers.

“Eventually, I’ll sit down and tell my story. But can anything be less interesting than writing about why the Black Crowes broke up? Or saying that Shake Your Moneymaker sold a million copies? I just don’t want it to be boring. These dream sequences of a dyslexic youth from the South!”

For more on the CRB, visit ChrisRobinsonBrotherhood.com
KEEP THE HOUSTON PRESS FREE... Since we started the Houston Press, it has been defined as the free, independent voice of Houston, and we'd like to keep it that way. With local media under siege, it's more important than ever for us to rally support behind funding our local journalism. You can help by participating in our "I Support" program, allowing us to keep offering readers access to our incisive coverage of local news, food and culture with no paywalls.
Make a one-time donation today for as little as $1.