Clay Melton & Friends Set To Record Live in The Woodlands 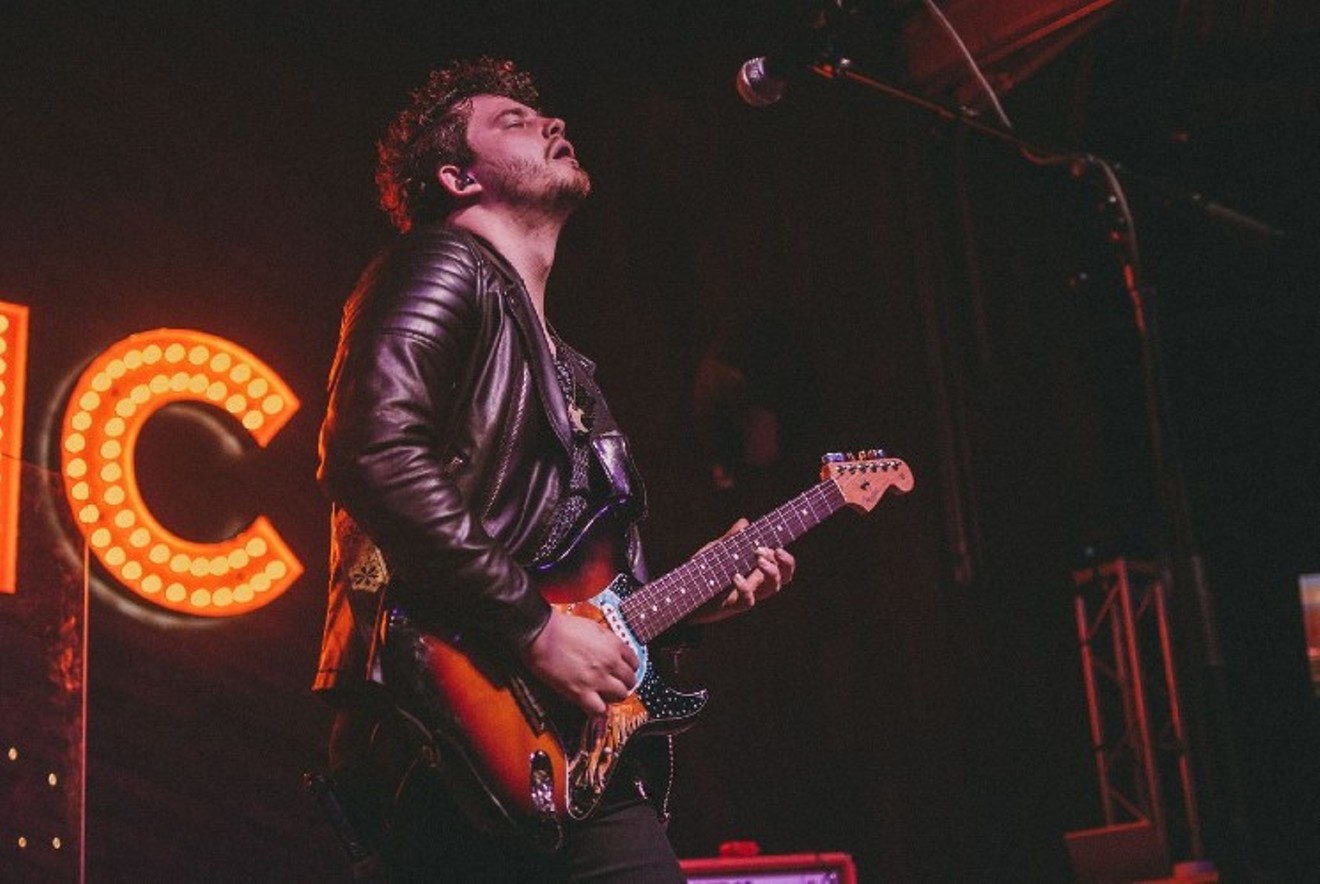 Clay Melton Photo by Miguel Martinez, courtesy of Clay Melton
Clay Melton enjoys a good live album. When asked for a favorite, the Texas guitarist by way of Louisiana mentions a couple that feel formative.

“This last year I started listening to WWOZ over in New Orleans, the radio station. I got their app, I was able to listen to them at home. It just made me go down a rabbit hole, listening to a lot of my Cajun heritage and the music of New Orleans, New Orleans funk, and I’ve always been a huge Meters fan,” Melton said. “To answer your question, The Neville Brothers Live at Tipitina’s is a fantastic performance. They do a version of ‘Fever,’ I think they open the show with it, and it’s right down my alley. There’s some Stevie - Live at the El Mocambo is a mesmerizing performance of Stevie Ray’s.”

Melton will certainly be channeling personal music heroes like Stevie Ray Vaughan and the Nevilles when he takes a crack at recording his own live album on January 6 at  Dosey Doe - The Big Barn. He and his blues rock trio will be audio recording and filming the event with a roster of special guests and a live audience of fans and friends.

“We’ve played at Dosey Doe a lot in the past. Steve Said over there is one of the first guys to give me a chance to play on a serious stage when I was a kid. I’ve just always loved it there and the acoustics are great. We were wanting to do a show but we were also wanting to record this live album so that’s why we chose to go there,” Melton said. “I have a lot of friends, musicians around town, that I’ve been wanting to do stuff with for a long time. Everything was starting to line up, so I thought we’d kind of do it as a collaboration show.”


One of Melton’s oldest friends, Kyle Garrett, will open the show with a country music set. He’ll give way to Melton for a 90-minute set, a mix of all-new original songs that have never been recorded before, some older tunes, some standards and songs by the evening’s special guests, saxophonist Evelyn Rubio, blues belter Sarah Grace and Sir Ear Toon of Kool & The Gang fame.

“I think we’re going to do mostly new songs towards the front end of it and hopefully get some cuts with the guest artists, with Evelyn Rubio and Sarah Grace and Sir Earl Toon. Hopefully when can get some cuts to put on the album with them.”

Malcolm Harper, a Grammy-winning audio engineer Melton has teamed with previously, will be engineering audio and video that evening.

“He’s great to work with and just a pro,” Melton said. “Our plan is to put it out in April of 2022 and support it. We hope to go over to Italy and the EU and do a small promotional tour there right at the beginning of the release.”

He’s not only interested in an arresting final product, but hopes to give the audience a thrilling show.

“We’re doing a couple of tunes with each artist and then at the end of the night having everybody come up. Sometimes guest artists come up on the stage and there’s that awkward plug-in moment and then they play their songs and it’s over and they get off and you’re kind of back to where you started,” he noted. “I kind of wanted the night to grow so everybody that comes up they stay on stage to play with the next artist that comes up with us.”


Melton said the plan is to record two songs with each special guest, a Melton song and one by each visiting artist. Houstonians who follow music even a little know Sarah Grace, a native Houstonian and Billboard-charting multi-instrumentalist and vocalist dubbed a “pint-sized powerhouse” by judges on The Voice when she competed on the show. They’re also likely familiar with Rubio, a bandleader and Houstonian by way of Mexico City, whose saxophone and vocal skills are always in demand in town. They hail from these parts, so we asked Melton how he fell in with Sir Earl Toon.

“It’s an honor to work with him and he’s a really, really down to earth guy, he’s super gracious, I’m just grateful to work with him,” Melton said. “We ended up meeting him through somebody that’s helped us a lot and is helping put this event together and promote it, John McNerney of John in Houston PR. He’s based here, he’s a great guy. He works with Sir Earl and he invited him to come down and Sir Earl said, ‘We’ll come down there. I’ll be happy to get up and play a song or two.’ So, of course you say yes! I was looking for a third guest and that kind of developed, so we’re real excited.”

As for Melton’s band, there’s a recent change. Zach Grindle is a fixture  on drums but there’s a new bassist in the trio. Melton said former bassist Raymon Minton is fronting a new band, The Poserz, (“They’re awesome, they’re real heavy,” he added), so stepping in on bass is Zach Cox, a veteran area guitarist attached to projects like HIGHDIVE, Bitter Taste and Scavenger.

“He’s been killer. He joined us this summer, so this will be his first album with us,” Melton said.

This refreshed lineup and new music is exciting to ponder considering Melton’s recent trajectory. His 2017 album Burn the Ships was a groovy sojourn through R&B, blues pop territories. A five-track EP released in July 2021, Back to Blue, was a return of sorts to straightforward blues rock and allowed Melton to get absolutely filthy on some of the tracks. The EP is sandwiched with slow burners, but the meat of it - the album’s three middle tracks - are uptempo rippers that feature Melton’s ferocious guitar skills. Both albums showcase his versatility as an artist. 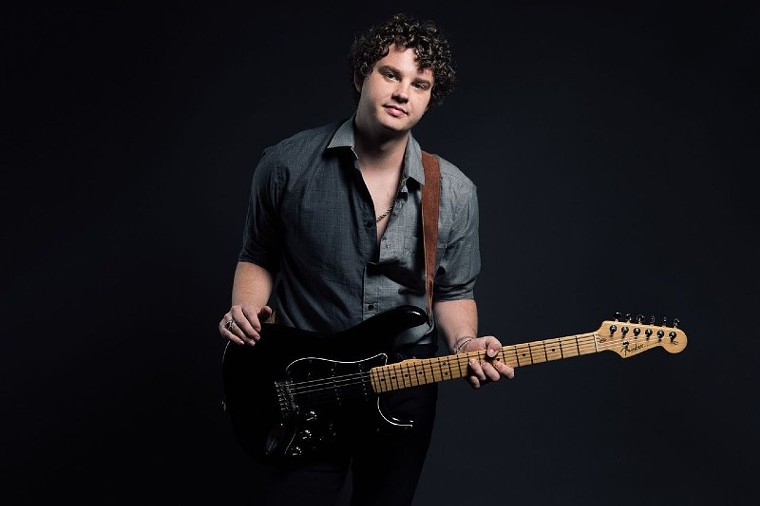 Melton's friends are integral to the live recording, behind the scenes, onstage and in the audience
Photo by Trish Badger, courtesy of Clay Melton

“They’re very different vibes,” Melton said of his last two releases. “The last EP was patchworked together just because of the pandemic and in a way, sitting here today, I’m glad I had the time to redirect at that time. It’s kind of the silver lining of being stuck at home for months. From the get, I really wanted to do something that was in the wheelhouse. I’d been making more pop-produced, clean Strat stuff for the last couple of years before that and I really just wanted to get back to what I write when I just pick up the guitar at home and I’m just having a good time. That’s always been bluesy, rock stuff. That’s where I come from as a listener and a player.”

Born in Lake Charles, Melton moved between Louisiana and Texas a bit as a kid, but has been here permanently since he was eight years-old. He started playing guitar just a few years later at 11 and has been playing live since he was 13. He said he played block parties and crawfish boils in the early days. He’s now spent more than half his life playing live shows, so it’s no wonder he wants to record one for his growing discography.

“There’s no better way to get that live effect and feel than to just put it in that context and to be able to have an audience there,” he said. “When you can feel in a live recording the energy in the room, you can hear the crowd responding, it makes you feel like you’re in the audience sometimes.”

He’s hoping for a good crowd, not only for the audio recording but for its video companion, which is being filmed by Wizard Rainbow’s Brandon Bond, the group’s longtime videographer. The whole evening is getting a push also from Big Stick Spirits, the Katy-area spirits company which recently threw sponsorship support behind Melton.

Even though his plan is to record the album as one single take, he said friendly faces will help ease any nerves, as well as a familiar setting. He said Dosey Doe is the site of his first show ever and is about the be the locale of one of his most ambitious projects.

“I have a lot of confidence in the band, we’ve been gelling good,” he said. “Now that we’ve been jamming the material, I feel good about it. There’s definitely that thought, ‘Oh, it’s one take,’ but audience-wise I know that it’s a Thursday show. Between the guest artists and the opening act that’s my best friend, the audience is going to be a lot of friends and family. I like that. I think it’s going to feel real comfortable.”

Clay Melton & Friends records live January 6, 2022 at Dosey Doe - The Big Barn, 25911 I-45, The Woodlands. Doors at 6:30 p.m. $10-$40.
KEEP THE HOUSTON PRESS FREE... Since we started the Houston Press, it has been defined as the free, independent voice of Houston, and we'd like to keep it that way. With local media under siege, it's more important than ever for us to rally support behind funding our local journalism. You can help by participating in our "I Support" program, allowing us to keep offering readers access to our incisive coverage of local news, food and culture with no paywalls.
Make a one-time donation today for as little as $1.