Back To Abnormal: The Continental Club Reopens

The beloved Continental Club will reopen April 1 with a performance by Beetle. Photo By Gladys Fuentes
Houstonians rejoice. One of the city’s most beloved and respected music venues is reopening. The Continental Club will once again host live music starting April 1, and this is no April Fools joke.

The venue was forced to shut its doors along with everyone else back in March of 2020 amid the COVID-19 outbreak. The names of the bands scheduled to play a year ago are still displayed on the small sign near the front door, while the large marquee above the entrance pays tribute to greatly missed Houston legend and club regular, Roy Head.

As other venues around town adjusted their status with the Texas Alcoholic Beverage Commission and normal methods of operation to account for new rules set by city officials and safety measures suggested by the CDC, The Continental Club held out a little longer, making their reopening even sweeter.

Now they are ready to go and have shows booked from April to May with all outdoor and seated shows. Masks are required when not seated and seating is first-come, first-served in their recently upgraded backyard area, which can host around 80 people.

For those who cannot make it early enough to secure a seat, there is plenty to do on the block while you wait with other bars and restaurants nearby open for business including the next-door Tacos A Go Go.

Shows are earlier than in pre-COVID days with doors opening at 6 p.m. and bands playing till 10. There is plenty of metered street parking and the large garage available across the street. The venue will stay open till midnight at the latest for now, making it a perfect place for a safe and fun after-work hangout.

The indoors of The Continental Club and connected Shoeshine Charley's Big Top Lounge will remain closed except for bathrooms available inside the main club.  There will also be hand sanitizing stations and use of debit and credit cards, rather than cash, is encouraged.

“It’s even safer now,” says club owner Pete Gordon. “It still felt a little weird doing it back then but we were going to give it a try and see if it was okay. I think outside is safer and seated and masked when you're not seated, it’s good. I feel comfortable now because a lot of people are getting the vaccine.”

The Continental Club has always been a home for our city’s finest and hardest working musicians, as well as hosting big name acts from across the nation. It is a music venue that feels like much more than just a room with great sound, their whole vibe has created a community that extends beyond the walls of the venue.

The club kicks off their reopening with Beetle, who have been performing every week virtually since the shutdown and recently celebrated their nineteenth anniversary playing their Thursday night residency.

“You have to hand it to those guys, every Thursday sometimes separately at their house and sometimes together here, [they] have not missed a Thursday virtually this whole time. I'm thrilled that the first will be their show, it fell perfectly for that,” says a smiling Gordon.

In a city where musical residencies don’t always survive, The Continental Club has found a way to provide many local artists with a steady gig and looking at their initial lineup for April and May, Houstonians will surely recognize the names and faces on the roster.

Booker Jennifer Caldwell says most out of town bands are looking for dates in the fall and for now, the club will continue to focus on hometown favorites.

“We’ve got a pretty small group of bands that we know are following guidelines and want to keep everybody safe and do this responsibly so that's who we have leaned on upfront to test the waters and see how it all works out,” she says.

“We’ve got a pretty small group of bands that we know are following guidelines and want to keep everybody safe and do this responsibly so that's who we have leaned on upfront to test the waters and see how it all works out,”

In a city that loves to lament losing its landmarks when it’s too late (RIP River Oaks Cinema), it’s nothing short of a miracle that The Continental Club has not only survived the past 20 years, but continues to expand its funky vibes up and down its mid Main block.

Originating in Austin, club owner Steve Wertheimer recruited Gordon, who was his manager at the Austin club, to help start the Houston location. The two went to work hard on the neglected space and opened for business in the summer of 2000 with a performance by Dale Watson and James McMurtry.

The club had already planned its big anniversary show last year to feature Watson and Jimmie Vaughan performing to help it ring in the second decade of rocking and rolling on Main Street.

In his 20 years of business, Gordon has seen his fair share of changes. He's suffered through difficult economic times and the building of the light rail line, which made the club almost inaccessible right as they were taking off — still nothing like this extended period of closure due to the virus.

The Continental Club’s energy and aesthetic successfully bleeds into the block, and even though newer construction has gone up around it, the original facade and old time buildings are never disrespected adding only more flavor and authenticity to the area. 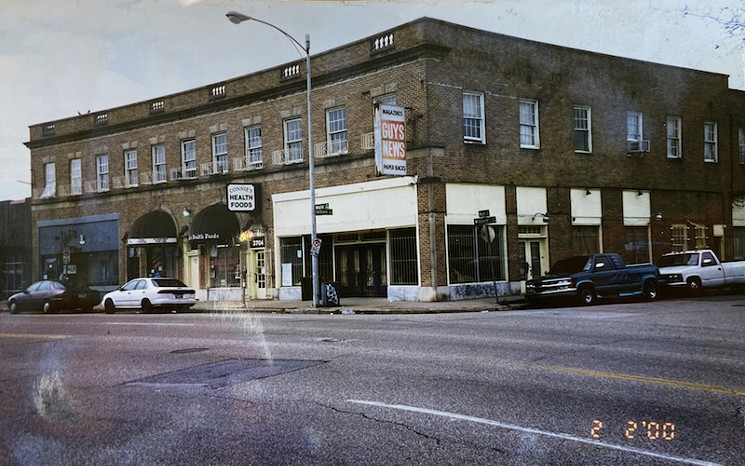 Originally The Continental Club was the home of Guys News, whose sign still hangs inside the club.
Photo By Steve Wertheimer
As neighboring businesses reopen or return to their regular business hours, there are also many developments in the works for the area. Austin’s beloved Homeslice Pizza will be opening in the fall right next door to The Continental Club, mimicking its relationship to the original club and pizza place on South Congress in Austin.

In yet more signs of the return of normal life, Sig's Lagoon has recently expanded its business hours as has My Flaming Heart. Pura Vida Floral Designs recently opened and soon there will be even more shopping with Fashion Time Machine and The Baker’s Man opening up as well.

Big Kat's Barbershop keeps the block busy too with many patrons waiting their turn outside the small barbershop with big personality.  Above the shop, local couple Bonnie and Ben Kennimer design and make custom western wear and gorgeous cowboy hats.

“We got a lot of good projects that are coming,” says Gordon optimistically. “There's a lot of good stuff to look forward to besides just opening. There's going to be even more great businesses down here to make this energy on the block and keep it going and flowing and keep people smiling.”

“We will get back to normal somehow, abnormal more likely around here. We are looking forward to getting back to abnormal,” he laughs.

“I'm so impressed with how Pete and Goodtime (John ‘Goodtime’ Smith, manager of Continental Club) have a really good understanding of what to bring to the neighborhood and how to build a community around the Continental,” says Caldwell.

Adding, “It’s more than just a place you go to see live music, it's a place where it almost becomes an incubator for people to learn about and appreciate and grow musically.”

For future listings visit continentalclub.com/houston
KEEP THE HOUSTON PRESS FREE... Since we started the Houston Press, it has been defined as the free, independent voice of Houston, and we'd like to keep it that way. With local media under siege, it's more important than ever for us to rally support behind funding our local journalism. You can help by participating in our "I Support" program, allowing us to keep offering readers access to our incisive coverage of local news, food and culture with no paywalls.
Make a one-time donation today for as little as $1.