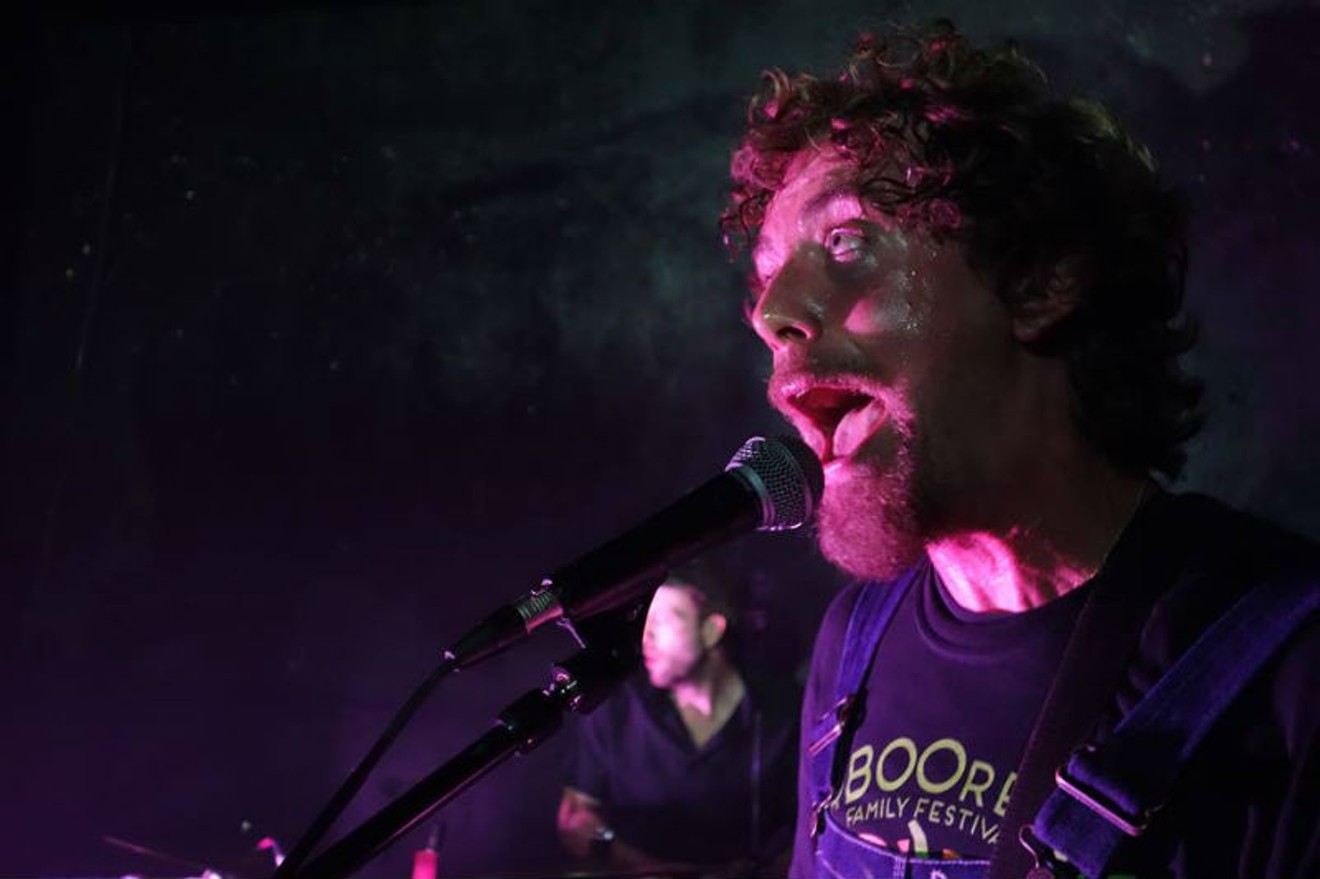 Darwin’s Finches is a Galveston band with a strong Houston legacy. Since its inception in 2006, it’s existed in various iterations, but the one constant has been the far-out genius of its front man and songwriter, Justin Clay.

Clay is inside the shadowy confines of Little Dipper a week ahead of the release of the band's new album, Good Morning Creatures II. The record gets its release show tonight at Donkey Paw Screen Printing. It’s a momentous occasion so the veteran act will be joined by a thrilling lineup including Two Star Symphony, Bernie Pink and Peelander Yellow.

Tonight’s celebration is about more than the new LP, which is getting high accolades in early reviews. It’s also about the journey the band has taken and the stops ahead.

Clay considers this the first “proper record” by Darwin’s Finches.

“It’s cool to have an official-feeling record after all this time,” he says, while recalling OLD SKATILLIVICH and LACRIMOSA, the band’s previous albums.

The record and is a gorgeous mystery, exactly what we’ve come to expect from an Artificial Head Records release. Its ten songs, about everything from yaupon trees to East Texas cowboy ghosts, are matched aesthetically by the album’s intriguing artwork, which the label pieced together after combing through 200 photos Clay sent for consideration. Members of fellow Houston bands Jealous Creatures and The Wheel Workers added their design talents to the project. The nuances aspire to Sgt. Pepper’s levels. The communal effort is a clear show of respect for the distinctive work Darwin’s Finches has done over a dozen years now.

Clay is joined by longtime drummer Cody Honey on the album. They were a duo for six years. Morgan Moody is the band’s current bassist and this is the lineup for Good Morning Creatures II. Clay said the band looked to emulate its live show – Darwin Finches’ calling card – on record.

“Cody understands what I’m doing and stuff. I showed him all the songs and Morgan, who’s playing bass with us now, just kind of stepped in to record it with us and we did it all within like three sessions. It was kind of chaotic and fun and everybody was still trying to figure it out and I kind of like that because it’s kind of like the live shows. We embrace the chaos,” Clay says. “I write the songs and tell the guys, ‘Let’s just do this as crazy as we can.’ With recording it, we just made it as chaotic as possible, too.”

“I had songs and I got these guys who were in a biology class with me to agree to play drums and bass with me. It’s just been like many drummers and bass players with me through the years,” Clay says of the band's formation in 2006.

He recalls the first gigs which were so formative he still considers Darwin’s Finches a Galveston band, though he no longer lives there and Honey and Moody reside in Austin.

“There was an open jam session at a biker bar in Galveston called Rosie’s and it was like a little hole in the wall. Now it’s a fancy pizzeria. The lunch lady at the school cafeteria were we were studying biology was the owner. She was Rosie. That’s where we started, at Rosie’s, and these old guys would bring in barbecue and stuff and they said, ‘Any band that gets up here and plays, you get free barbecue.’ Free barbecue was the motivational factor.”

Anyone who comes across Darwin’s Finches becomes part of its gonzo ecosystem, a place inhabited by all manner of weird and wonderful species. The band’s album credits have included everyone from the artists in the band to “schizophrenic Gerald” and “Grandma.”

He recalls a couple of those characters.

“(In Galveston), we got heckled by the Stevie Ray Vaughan crowd but it was cool because we were having fun. There was this one really old blues guy named Trinity. He would get up and perform his whole set too and I’d sit in on drums or something. We’d back him up and he was always sticking up for Darwin’s Finches in the old days. He just recently died.

“The funniest thing about him was he always used to talk about how much every Galveston band would just play ‘Mustang Sally’ over and over again. When we started playing in Galveston, every band on The Strand was just cover bands.

“They had Trinity’s memorial jam, it was like last year, you know, and we showed up there as we are now – and, sure enough, every band was playing ‘Mustang Sally.’ So, we went in there and destroyed it and got everyone all crazy. They let us play three songs and they said, ‘Okay, boys, that’s good.’ But, we knew Trinity would have been proud.”

Following Darwin’s Finches is a little like reading Franz Kafka’s The Castle. There are strong, recurring themes and oddball characters and no real ending. Clay illustrates the point with the story of a fellow musician the band bumps into occasionally at Old Quarter Acoustic Café on the island.

Clay says his wife, Myra, is involved in Darwin’s Finches efforts, from supporting the music to creating visual art
for the band.

“My wife, she’s been there from the beginning doing all the crazy stuff we do, like smashing fruit. She’s a vital part of the whole thing, too.”

The first line of the new album is a lyric inspired by work Clay’s mother does. The new album features Justin’s brother, Adam V. Clay, a classical pianist, on piano.

“Me and him brainstorm about stuff all the time. We’re still kids. Whenever we’re together we’re still making hand puppets and stuff. All our inside humor is part of Darwin’s Finches, too.”

Those “inside jokes” are a legacy being passed onto the brothers’ children, including Justin’s six-year-old son, Odin, who has already expressed interest in having his own band. The jokes are also like Easter eggs for those who have followed the band over the years. The album’s inner sleeve resembles a scientific paper “written in MLA format,” according to Clay, and addressed to his favorite biologist, E.O. Wilson.

“I’m going to mail him a copy,” he promises. “The father of sociobiology, man. He’s like 90 years old, too. I send him messages. He never responds, but I’m a huge fan. I’m an E.O. Wilson fanboy.”

From its name – picked on the spot in that long-ago biology class – to everything after, science has played a role in the band’s life. Clay’s working life has been spent in and around biology. He currently works at the Houston Arboretum and Nature Center.

Not surprisingly, Clay has aligned with some other forward-thinkers in the area music community.

“Throughout the course of all this, I ended up playing drums with Jandek at Mango’s in 2012. It was just kind of a random thing. My friend Jack who used to write with Free Press was like, ‘Hey man, do you wanna play drums at Mango’s in July?’ I was like, ‘Drums? I played drums like 10 years ago,’ and he was like, ‘Good, that’s what this person wants. He wants someone who knows how to play an instrument but hasn’t played it in a long time.’ I was like, ‘Sure, okay, I’m your man.’

“Jandek and his friend friend Sheila were there and said, ‘We just want someone to play loud and fast because we want to play punk rock music,’ so I was like, ‘Yes, sir.’”

He got a letter from Corwood Industries – the pioneering musician’s label – two years later, with compensation for the 2012 gig and an invitation to join Jandek on a four-day tour of the United Kingdom. Clay said yes to both the check and the overseas gig.

No plans to take this show across the pond (yet), but Clay says after tonight’s event they’ll play the Cowpunk X-mas Party December 21 at Fitzgerald’s then hit the road for some out of town dates in January before returning to the studio in the spring.

“Everything is valuable, especially little random stuff,” he concludes. “I feel like that is a recurring Darwin’s Finches theme. It’s real personal stuff but it’s random stuff you could see if you were there.”

Darwin's Finches album release for Good Morning Creatures II, 7 p.m. Friday, December 14 at Donkey Paw Screen Printing, 1125 Providence. With Two Star Symphony, Bernie Pink and Peelander Yellow. All ages, free.
KEEP THE HOUSTON PRESS FREE... Since we started the Houston Press, it has been defined as the free, independent voice of Houston, and we'd like to keep it that way. With local media under siege, it's more important than ever for us to rally support behind funding our local journalism. You can help by participating in our "I Support" program, allowing us to keep offering readers access to our incisive coverage of local news, food and culture with no paywalls.
Make a one-time donation today for as little as $1.