Destroy Boys Are Here to Destroy Misperceptions (and Viet-Cajun Cuisine) 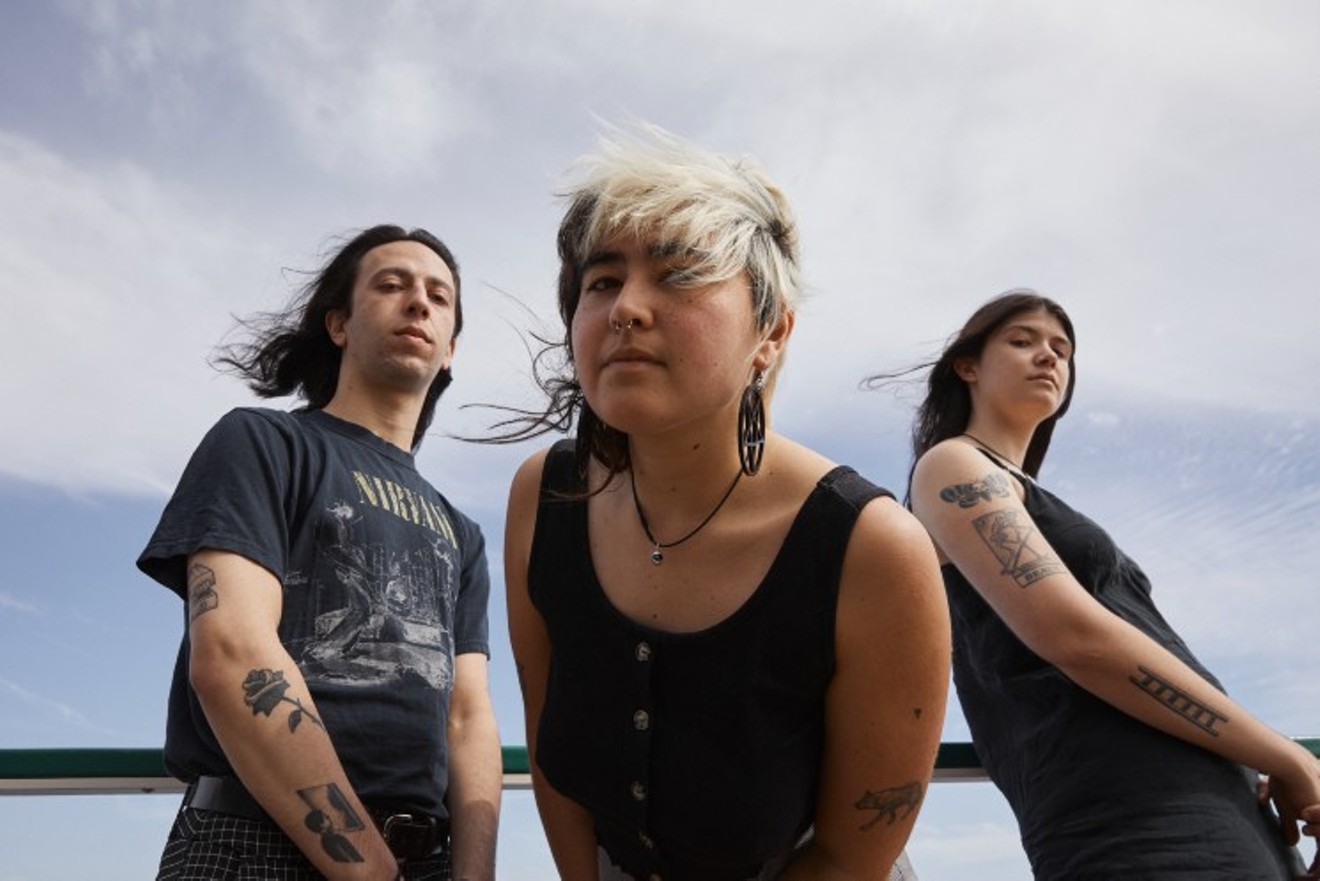 Destroy Boys Photo by Magda Wosinska, courtesy of Candy Shop Management
Destroy Boys is on the move. The band will be at Secret Group this week, but the day we spoke with the punk trio by phone they were  in a car headed to rehearsal. We’ve listened to a bunch of songs from the band’s latest album Open Mouth, Open Heart and it’s an invitation of sorts to listening looky-loos. A prevailing theme is if you want to know about us, just come ask us. So, that’s what we did. Direct from the source, pushing the preconceived notions aside, destroying the misperceptions around Destroy Boys. Tell us the main thing we need to know about the band, we asked.

“My whole thing with the band is I’ve always just wanted it to be about the music,” said Violet Mayugba, the band’s guitarist and co-founder. “I think what you might be referencing is we get pigeon-holed a lot as riot grrrl, which is a movement from the '90s, which is great and influenced us a lot, but we’re just not that kind of band and I think we get labeled as that a lot just because we have female people in our band. But the band and what we all care about the most is we’re all just passionate and addicted to the music. I think that’s the main thing that we’re really about.”

“Vi definitely hit it on the nose, music is always at the forefront of whatever we do,” added Narsai Malik, the band’s drummer. “Of course with the platform comes other social issues we all care about deeply, for sure. For all of our tours and this upcoming one we have a lot of mutual aid stuff, which Alexia mainly finds and takes care of, which is always important to us as people and as a group.”

“This is Alexia — hey! I’m in the car now,” announced the band’s singer Alexia Roditis. “As far as morals and values of the band, I think the one that I definitely think is important is using what we have to improve people’s lives basically. Whether it’s literally using our platform on the stage to highlight mutual aid groups in different cities as well as just making people feel heard. Making women, making non-binary people, making people who have gone through shitty, traumatic events or bad relationships, just all kinds of things, making them feel heard as well.”

Roditis said the message is about “doing what you can, but also it’s not going to be perfect. And knowing that you can never do something completely right and that doesn’t exist. I feel like, as a band with our music for example, we’ve grown a lot as far as how we play and what kinds of things we write and in the same vein we grow as people and learn like everybody else.”


The ride to rehearsal seems smooth but there have been bumps in the road for Destroy Boys, all part of the growth Roditis discussed. The band formed in Sacramento in 2015, went through some lineup changes, fought off the Bikini Kill comparisons and even had to defend its name against sensitive overthinkers, believe it or not. They took some collateral hits in events concerning sexual misconduct surrounding two entirely different bands, being labeled as apologists by some observers of those events. They've had to grow fast in a sometimes harsh business.

“I think a lot of people from an outside perspective kind of perceive us as a lot older and more experienced than we are,” Mayugba said. “I think there’s no right or wrong way to really go through the music industry. There’s definitely no play-by-play book, there’s no set of rules. A lot of people don’t have mentors, we didn’t. We had a couple when we were younger but as the band grew we kind of really had to rely on ourselves. Yeah, I mean, I think people just don’t understand that we didn’t really understand what was going on, either.”

Mayugba’s parents are musicians. Her father’s a guitarist and her mother’s a singer and they had some regional success in their pursuits. Their daughter’s band has broken much wider than theirs, in an era where social media helps but also works against bands. It’s part of the reason the band is focused on getting the 411 by dialing them directly. Misunderstandings have clearly affectedthe music. The latest album opens with “Locker Room Bully,” which equates the Internet to one big, sweaty, smelly-sock-filled room of angst and immaturity. “Hunting witches has turned into hunting bitches/And for some reason I can't seem to relax/Do me a favor and find out the facts/Before you come to my door ready to attack,” Roditis sings to set the tone.

“I think the album really reflects our growth as musicians first of all," Roditis said, keeping the focus on the music. “It’s a lot more thought-out, we spent more time constructing the songs. That in and of itself was kind of different.

“This is something that we’ve done for most of our career but (the album) just has all kinds of different perspectives,” Roditis continued. “In one song, you’ll have two perspectives of the same situation. ‘Locker Room Bully’ shows two perspectives, like the entire song and then the bridge are like two very different people speaking. ‘Ruins’ is the same thing, speaking from the perspective of the person who’s in the bad relationship versus the person who is doing those things.

“I really think that this album shows that things are complicated. No one is just one thing. Even the song is not just one thing,” Roditis continued. “I feel like that’s something that was kind of in the background but also influenced all the songs. You can’t pigeon-hole people. Everyone is complicated and everybody has these stories and everybody can think a thousand things about one topic.”

If there’s a sense of duality there, it’s natural. The band’s music is delivered in English and Spanish. It's reflective of who its members were before they began music in earnest and who they are now. People grow and change and so do Destroy Boys. As much as they’ve grown on record, they’re even more excited about the maturity of the live show. They said they have not played Houston before, so fans will be getting an experienced experience from them.

“All three of us take our live show very seriously. We’re very methodical about the way we go about things,” Mayugba said. “But a lot of it goes out the window when we get up there because we just get so excited. We can plan everything down to the second, and we just started kind of doing that, but then you know, we’re out of breath by the second song from dancing so much.

“Our live shows are really high-energy which makes it easy to fall into a cycle of just getting really excited,” Mayugba continued. “All the fans are very nice and kind, there’s a pretty overwhelming mutual respect throughout the whole crowd. Besides getting distracted we do take our live shows very seriously. We are on our way to rehearsal right now because we can be as punk and talk as punk as we want, but I take a very tight show really seriously. It’s important to me and that’s a huge growth from when we started because we were not like that.”

The band are dedicated foodies looking forward to sampling Houston's famed Viet-Cajun cuisine
Photo by Magda Wosinska, courtesy of Candy Shop Management
Mayugba and Roditis reflected on just how far they’ve come in that respect. They’ve learned a lot from studying bands they’ve toured with like Taking Back Sunday and Lagwagon and bands they admire like Green Day. They’ve developed their own stage presence. They said their earliest shows featured stage banter. A lot of stage banter. An inordinate amount of stage banter. Mayugba and Roditis shared a laugh thinking back on it all.

“We would talk for so long,” Mayugba shared. “Eventually my mom was like, ‘Dude. You should stop doing that.’”

But that give and take helped fans know who Destroy Boy is and it’s clear, if you want to know about them, just ask. Maybe over a hot bowl of pho or a molcajete filled with savory guacamole. The last thing we discuss is food because word has it Destroy Boys loves to destroy tasty dishes of fine cuisine on tour.

“Me and Narsai are very into the food,” Mayugba confirmed. “Alexia’s kind of getting on it too, which is awesome. But, we’re obsessed with the road food.”

“I like to at least eat one delicious meal every day,” Malik said and added he hoped to find a good Viet-Cajun spot in Houston. “Any given city we go to, hours during the drive there I’ll spend gathering every restaurant in the area of the venue, looking at all the menus, picking the right thing. I love to do that on the road.”

It’s notable that we’re discussing fusion food. Roditis took the last word on the band and the thrilling fusion of people for which it’s made.

“Another value we have as a band is that punk is for everybody, that rock is for everybody and that everyone should be able to find a place in this kind of music and in every kind of music,” Roditis said. “It’s been dominated by cis straight white dudes for a long time but that’s not even who created the genre. Lots of POC, black people, women and queer people have really created and shaped the genre. So, I think that’s important, too, knowing that everybody is accepted.”