Dj Constant Shame wants you to know there should be no shame in your sadness game. In fact, coming to any of the emo nights hosted by Dj Constant Shame - also known as the veteran Houston musician Roger Medina – is an opportunity “to connect with music on such a depressing, emotional level that (listeners are) overjoyed,” he notes on his Facebook artist page.

Can a communal gathering soundtracked by songs which wallow in melancholy and woe actually make us happy? Euphoric even? It would seem so. Emo night has become a can’t-miss calendar date for music fans at bars and music venues world-over. Enough time has now passed since the original releases of these glum and angsty anthems (think late ‘90s/early aughts and bands like My Chemical Romance and Sunny Day Real Estate for the music’s heyday) that the whole thing has become nostalgic. Emo night is that “misery loves company” adage come to dance party, sing-along life.

“Well, I think it’s not only the songs being sad, it’s about what they’re about and how they make the individual feel or what they remember by hearing them,” Medina noted of emo night’s appeal. “I guess I can kind of compare it to going to a haunted house or watching a scary movie. Some people enjoy getting scared even though it’s not necessarily a ‘good’ feeling or emotion most people celebrate. Being a person who has dealt with clinical depression, I have always found comfort in sadder music or anything that made me feel like I wasn’t the only one feeling what I felt at the time. I know that sounds counter-intuitive but I feel like many do the same thing or at least understand.

"That’s what I think drives people to my emo night, embracing and celebrating an emotion that is otherwise looked down upon, but in a healthy way. Are you sad? Let’s be sad together and dance and cry the night away! I just want people to have a good time and feel understood.”

That last notion sparks a critical difference between most emo nights and what Dj Constant Shame offers. (And yes, by the way, the proper name is “Dj” because “the lowercase ‘j’ makes it sadder,” Medina clarified). Because unhappiness is an emotion anyone can celebrate, Medina’s playlist of heartbreaking hits is designed for a broad range of listeners. Besides the usual suspects, there are emo tracks from 1980s new wave. You might hear Tejano songs or ranchera classics. As long as it’s got that low vibe, it could make its way into Medina’s set. 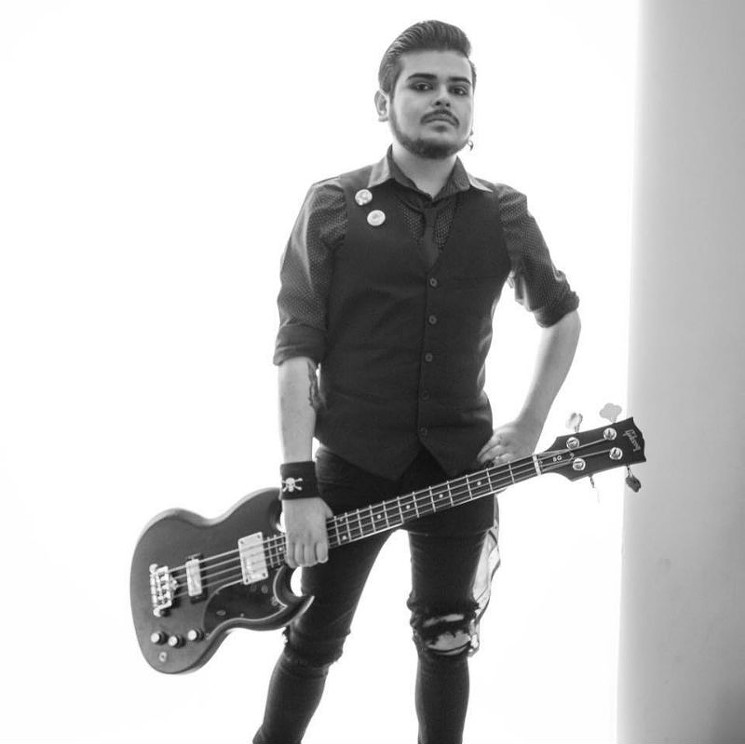 Medina is a veteran musician with ties to several Houston acts
Photo by Scot Overholser, courtesy of Roger Medina

How about a sample, we asked? Something that will give us a feel for the set’s diversity and maybe make us feel just a little cheerfully gloomy? Medina said maybe you’d walk into his set to The Smiths’ “Half a Person.” No big surprise there; but, that song might fold into Selena’s “Contigo Quiero Estar.” Now your interest is piqued. Even if you don’t understand Spanish, you understand the heartache of longing for someone. Appropriately, the next tune might be “Lovefool” by The Cardigans, followed by Vicente Fernández’s “Por Tu Maldito Amor.”

Any given night, there’s also a good chance Dj Constant Shame’s avid followers (may we dub thee "Constant Shamers?") will hear “Neon Moon.” The Brooks & Dunn tune is something akin to the unofficial song of  Medina’s deejay night.

“Neon Moon! Any song can be emo if you want it to be,” he laughed. “It’s all about the lyrics and not the genre in my eyes. I love how people look forward to me playing ‘Neon Moon’ at my emo night. It really makes it the most Houston,Texas emo night yet.

“I love my city, I love my state, yes, they aren’t perfect but the culture, especially in Houston is close to it,” Medina continued. “It's such a sad song and brings everyone to the dance floor with someone special, that’s what makes it perfect and a must-play for what I’m doing.”

The whole endeavor is still relatively new for Medina, who is probably best known as bassist for the punk act Giant Kitty. He said the band, which is on an extended hiatus, “will always be a part of my life and something I am proud of. We are actually getting together June 15 at Dan Electros to film for the movie Acid Test, directed by Jenny Waldo, a long time Giant Kitty fan and the director of our music videos. It is not a concert but we will all be there hanging out and making movie magic! Extras are needed, so anybody that wants to spend a Saturday with us and bring your ‘90s attire is welcome.”

Dj Constant Shame invites all to drown their sorrows in music
Photo by Albert Vasquez, courtesy of Roger Medina

Aside from that, Medina’s kept busy as a member of the ‘60s cover band and supergroup Motion Potion, which features members of Flower Graves (Mikey Drag, McCullough Ferguson) and Young Mammals (Carlos Sanchez). He is also with the progressive thrash metal band The Virulent and said the band is releasing a debut EP soon.

Because the deejay effort is still somewhat upstart, Medina said he doesn’t have a standing emo night gig yet. He encourages fans to follow the show on the Facebook page and said he is doing a gig Friday night at Shoeshine Charley’s, followed by an afternoon set on June 1 at the Magnolia Park Art Fest. Because his set is so diverse, it’s usually a digital set, though he said he has handpicked some vinyl from favorite haunts like Cactus Music and Deep End Records.

“Acquiring my music taste though has been a long journey. I’ve gotten my love of Tejano from my late San Antonio-born grandma and my mom, my love of ranchera and any older, sad Spanish banger from my dad, who is from Guanajuato, México, and all the ‘80s, ‘90s and modern stuff from my sister, brother and cousins. Also going to weddings as a kid has influenced my song selection, I love nostalgia, as do so many others. So, a lot of people have helped contribute to Dj Constant Shame happening, it’s not all my fault,” he laughed.

Medina said he’s just doing the emo night he always wanted, so he’s glad that he's making others happy with so much diverse music that is so, so sad.

“People have told me I’m their favorite emo night deejay or how excited they are for the next event. It’s really satisfying to know I’m hosting the party I’ve always wanted and people legitimately enjoy it,” he said. “The tables filled up with empty Modelo and Lone Star bottles are a good sign too. I also provide tissue boxes at every table just in case a song hits close to home. There has even been a birthday party at one of my emo nights. Lots of singing, dancing, the occasional tear and good hangs is what a Dj Constant Shame night is about.”