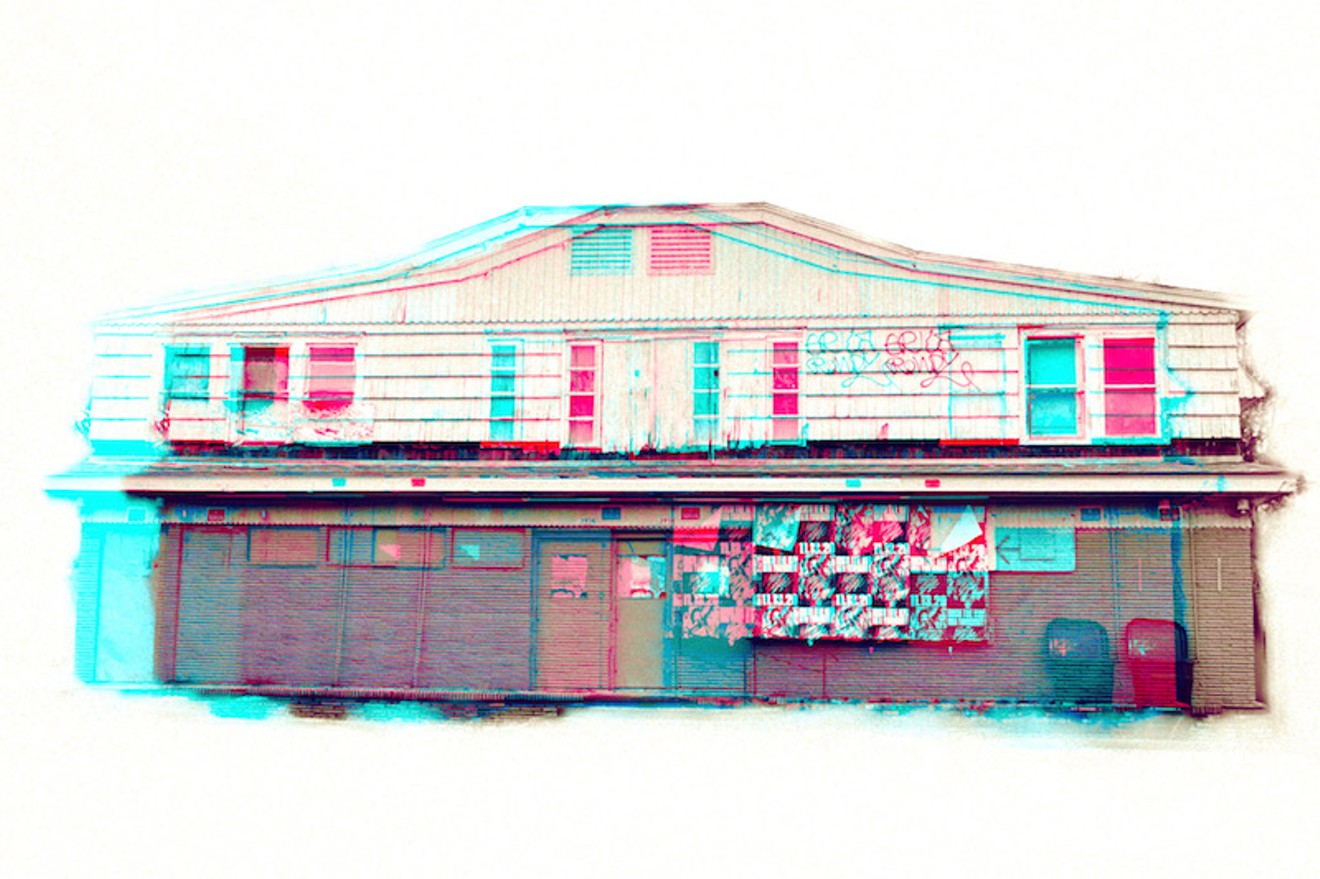 Phillip Pyle, II curated Eldorado Nights, an outdoor visual art experience taking place throughout the month of February with images projected onto the Eldorado Ballroom. Artwork by Phillip Pyle, II
A building is more than its structure; it houses the stories and vibrations of its past dwellers and they should be celebrated and preserved.  Every Saturday in the month of February visual arts installation Eldorado Nights will celebrate Houston's famed Eldorado Ballroom.

The historic ballroom was once the city’s premier music venue for jazz and blues music bringing in national acts like B.B. King and Ray Charles and also serving as an important venue for local musicians.

Built in 1939 in Houston’s Third Ward neighborhood, Eldorado was owned and operated by African-American businesswoman Anna Dupree and her husband Clarence Dupree. It maintained in operation as “Home of Happy Feet’” until 1970 and in 1999 it was gifted to Project Row Houses who reopened the venue for events in 1999.

The exterior of the historic Eldorado Ballroom featuring an image of Anna Dupree the original owner and operator of the venue.
Photo By Phillip Pyle, II
Located on the busy intersection of Dowling and Elgin, Eldorado maintains its classic Art Deco facade and continues to be a point of pride for the city and for the Third Ward in particular.

Project Row Houses, in its mission to preserve the strong African American history of the area and beyond along by pushing for social awareness through art, is hosting a series of special events in the month of February meant to highlight the importance and rich history of the Eldorado.

Eldorado Nights, curated by local artist Phillip Pyle, II and co-presented with the Aurora Picture Show, will see the legendary building lit up with projections of visual art with different artists presenting each Saturday night of the month.

“I proposed it to Row Houses probably over the last month. I know that Project Row houses was in the process of trying to renovate the building and so I just wanted to do something artistic with the building before anything happens,” says Pyle who as a native Houstonian is all too familiar with our city’s habit of tearing down beloved landmarks.

Pyle, who serves on the board of Project Row Houses describes how he came to get involved with the organization by initially visiting friends in their studios.

Pyle tapped other visual artists that he knew would fit the aesthetic and mission to round out the series. Jamal Cyrus, Brian Ellison, Bria Lauren and Pyle himself will each take turns headlining an evening featuring their work on the outside of the building from 8-9.

All of the artists pulled from historical archives to create their visual body of work to be projected onto the building each Saturday night this month.  This is no easy feat at a time when our city's archives are not easily accessible due to the pandemic.

Artist Bria Lauren was able to obtain images from Jack Yates High School photography teacher Ray C. Carrington, III who for years has encouraged his students to step outside and document their own history in the Third Ward.

Pyle describes his work as reworking of historical images of Third Ward and old concert posters to reflect not only the Eldorado, but also the many black owned and frequented nightclubs that Eldorado paved the way for. Pyle will fittingly have Flash Gordon Parks spinning for the event.

The event was designed to reflect the classic concert structure of having an opener from 7-8, which will consist of the non headlining artists of the evening showing additional work before the headliner goes on.

“Basically the idea is that whatever you see from all of us on those nights, you don't see on their specific night, you get some special stuff.”

“In essence it was a combination of, how do you do something creative and show love to an old building in a pandemic situation? The idea of just projecting and getting everybody outside I thought it'd be one of those things that you don't get to see for the most part, not very often, in Houston.”

Pyle says initially his concept was to have a visual installation that viewers could see from the comfort of their cars while driving down Elgin on a Saturday night but as they studied the actual building, they decided not only could onlookers cruise by, but the parking lot could be used for people who wanted to stay put.

Chairs will be set up in front of the building and socially distanced. Masks are required and will be provided for those in need as well as hand sanitizing stations.

“It's just a Houston thing in general, if you can make anything that's creative for people to do while they're still in their cars, that works really well for Houston cause we are always in our cars.”

Eldorado Nights will take place Saturday February 6 with Jamal Cyrus, February 13 with Brian Ellison, February 20 with Bria Lauren and February 27 with Phillip Pyle at Eldorado Ballroom, 2310 Elgin, 7 p.m. Free.
KEEP THE HOUSTON PRESS FREE... Since we started the Houston Press, it has been defined as the free, independent voice of Houston, and we'd like to keep it that way. With local media under siege, it's more important than ever for us to rally support behind funding our local journalism. You can help by participating in our "I Support" program, allowing us to keep offering readers access to our incisive coverage of local news, food and culture with no paywalls.
Make a one-time donation today for as little as $1.