Enjambre Buzzes Into Houston With a Swarm of New Songs

Enjambre Photo by Eric Buccan, courtesy of Rocio Gutierrez Marketing & PR
It’s been a little while since Enjambre played a show in Houston. When the Mexican indie rock band returns this week, local fans will hear something a bit different in their sound:  lyrics sung entirely in English. The band’s stop at The Ballroom at Warehouse Live on August 27 is a showcase for songs from its 2020 album Próximos Prójimos and an approaching EP titled Ambrosia. The latter is a four-song record featuring the first English-language songs of the band’s 20-year career.

We discussed the new music, why it demands to be heard live finally and an enchanting new video with the band via Zoom ahead of this week’s show. We began by congratulating them on their recent prolific output.

“We’re really happy with what we did. We decided that we wanted to do something in English a long time ago but it was never a priority. Everything, or most of the stuff I write, is in Spanish. Even when I was living in the States, I always liked writing in Spanish more,” said Luis Humberto Navejas, the group’s vocalist and front man. “But we always had that idea, we always wanted to do a record or some recordings in English, but we didn’t have time for it because we were working on the other stuff and touring as well.”

The band has been busy growing a massive fan base with eight full-length albums and tours which have taken them from home base in Mexico (by way of Santa Ana, California) to the United States, Central and South America and Europe. Their blend of ‘60s psychedelic rock and ‘70s era romance songs from Mexico has attracted Facebook followers and Spotify listeners in the millions.


All that momentum came to a screeching halt with the pandemic. Knowing they couldn’t be idle, they completed their full-length and began work on Ambrosia’s four tracks. The first single from the EP is “Delorean,” and “Crash” is slated to be the next single release. The full EP debuts on September 30. We wondered how the band thought its fan base would take this change in course.

“It’s hard to tell. When we make music, it’s not like we’re focusing on a particular demographic or audience, we just like to be happy with what we hear and we’re really happy with the EP,” Navejas said. “If it goes to places where we’re not yet, that’ll be awesome. If people who don’t speak Spanish meet us for the first time through this EP, that’ll be great and we would love that, but that wasn’t really the goal or the focus.


“That’s never been the focus of any of the music that we’ve done, we’re just very privileged to have an audience that is interested in what we do and the same way we’ve been doing things is how we did this EP, so let’s see what happens,” he said.

A good place to learn how new music is being received is in a live music setting. So far, so good according to the band’s guitarist, Julián Navejas, one of three Navejas brothers in Enjambre.

“It’s the first time we’re touring with the album so we’re really excited, not only to go back to shows and play live, but we’re also excited for playing our new music for the first time,” he said. “And I think our fans are excited too and it shows, not only on the feedback we’re getting on our social media but also from the few shows we’ve done so far. There’s a lot of enthusiasm and there’s a lot of excitement, not only coming from us but coming from them.”

It’s not lip service with Enjambre. When they say they’re stoked to get in front of audiences to perform these new songs, there’s an honesty to it. Rafael Navejas, the band’s bassist, explained the excitement.

“For us as musicians, it’s like the ultimate test to stand on stage in front of an audience and play our music and see how it turns out. It’s always exciting, it has no comparison,” he said. “Everything we do is exciting - when it comes to writing, getting in the studio — but when we present our music to an audience, there’s nothing like it. So, for all this time that we were unable to do that we were missing a great part of what we do.

“Now we have all this accumulated excitement to go back onstage and perform this new phase of the band, this new stage that we’re going through musically, so we’re twice as excited because not only are we going back to stages and audiences but we’re presenting new music that hasn’t been performed live before and it’s a complete different experience to listen to an album than to listen to that same music live. It’s just the level of energy, it takes you to different places. There’s nothing like it,” Rafael continued.
“We’re very excited and we’ve noticed, as my brother said, just based on the last few shows, people are just as excited. Tickets are selling fast and we’re just living the experience again. It’s great.” 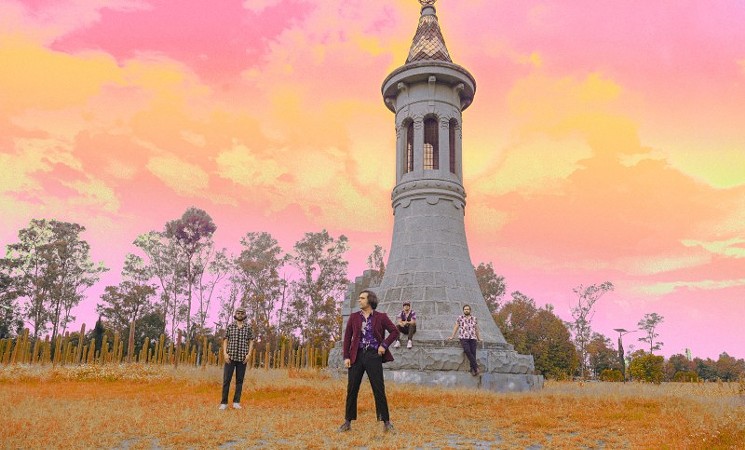 The entire band spent lockdown in Mexico. Luis said the band had a full slate of shows and festival dates that were scrapped or postponed in the wake of the live show hiatus. He said Mexico was just like anyplace else in the world coming to terms with a global pandemic.

“We didn’t know what was going on, like anyone else. We just stayed away from each other until there was more information on how to hang around other people. We were just very careful with all the recommendations,” he said.

Eventually, he noted, “We got together — we’re not going to be playing live, so this is a great opportunity for us to work on our record and finish it up and make it sound exactly like it has to sound. So that was a positive thing. And then there was an EP. So, within this horrible situation, we were able to bring something positive out of it.”

“I don’t know about other musicians or other people, but we definitely made something good out of this whole experience,” he continued. “Personally, there were a lot of things that I was postponing, that I was procrastinating on, a lot of things I was working on other than music, things that I was writing, a book that I wanted to put out — it was a children’s book that I was able to put out — so I guess it gave us time. The unfortunate part of it is there’s all these things I want to keep doing and now I have to reorganize because we have shows again. But it’s a good thing. It’s a good thing because it’s an indicator that things are going back to, not to normal, but close to how they were before. We can embrace that and be happy about it. I feel that we're all really blessed.”

Again, these words may seem to come from an echo chamber, one created by rock stars who are ready to play live shows again. In Luis’s case they’re not hollow at all.

“I actually got it, I got COVID, and I’ve learned to appreciate more my sense of smell and taste now that they’re kind of almost all back. There are these things that happen when you go through adverse circumstances,” he said. “We did all right, we’re okay, we can’t complain or be sad about anything because within all this adversity, we’re okay. We’re really blessed to be where we’re at right now.”


Where they’ll soon be is here in Houston. The tour began in July with dates in Mexico and shows in Los Angeles and Chicago’s Ruido Fest. The brothers Navejas said Houston is a comfortable tour stop.

“We’ve been there a couple of times and the fans there are really nice to us and there’s a lot of expectation for that,” said Julián, who noted that the Houston fan base seems to grow with each outing. The same is expected for this week’s show at Warehouse Live. “It’s about to be a sold out show.”

“Houston is always one of those go-to cities in Texas so, you know, we try to go there at least once a year, so we have high expectations for it,” Rafael added.

We end our chat by discussing the band’s first-ever English-language single, “Delorean,” and its accompanying video. It seems like a fitting place to conclude since the song’s a bit wistful and recalls going back in time, to when things seemed simpler in some ways, maybe during times when mask mandates weren’t trending news and rock bands could hit the road at their whim to debut new songs live.

“It applies to what you’re saying about how things were before the pandemic and it applies also to just in general how life is, that we make choices that bring us to the place that we’re at right now. They’re not always the best things or the best decisions that we’ve made and we have to deal with the consequences. And sometimes we just think, well, if I could go back and change things, what would I do?” Luis explained. “And, then there’s also wondering about what could happen in the future and not knowing this and just wishing to travel in time but not being able to do that either.

“It’s a song about nostalgia and frustration,” he said, feelings we’re all keenly aware of these days, ones we might share emphatically with the band when it performs the song live for us. “We like to use the Delorean as a symbol of both things, this time traveling object that doesn’t exist and also a reminder of how things were back in the day.”

Enjambre, with special guest Siddhartha, Friday August 27, 2021 at The Ballroom at Warehouse Live, 813 St. Emanuel. Doors at 8 p.m. for this all ages show. $65-$75.
KEEP THE HOUSTON PRESS FREE... Since we started the Houston Press, it has been defined as the free, independent voice of Houston, and we'd like to keep it that way. With local media under siege, it's more important than ever for us to rally support behind funding our local journalism. You can help by participating in our "I Support" program, allowing us to keep offering readers access to our incisive coverage of local news, food and culture with no paywalls.
Make a one-time donation today for as little as $1.