Hayes Carll Gave It All On You Get It All 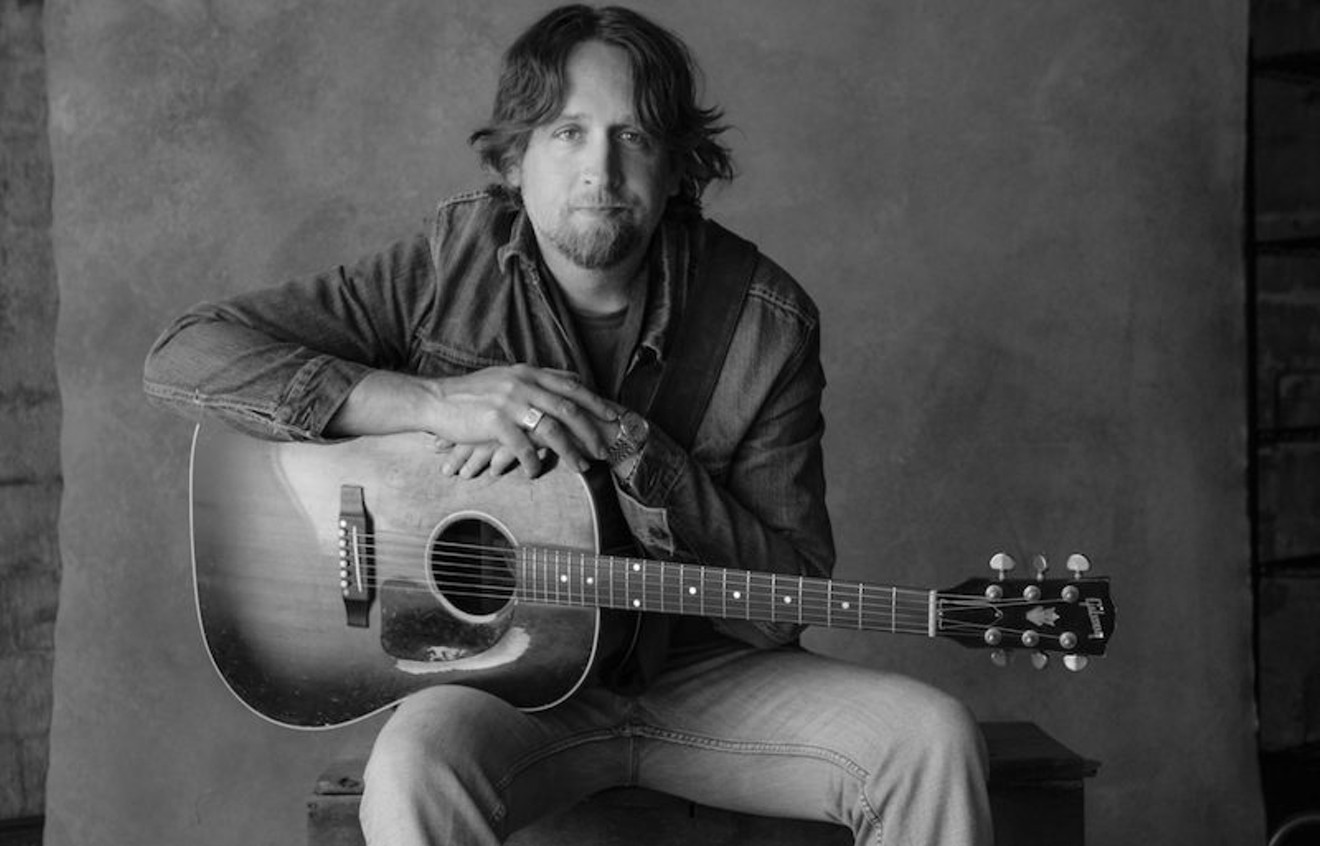 Hayes Carll will perform two shows at The Heights Theater on Friday, December 17. Photo By David McClister
Songwriting is no doubt a craft, sometimes springing seemingly out of nowhere and other times the result of combing through words and experiences in a quest to write the perfect song. During his long career and road to his eighth album You Get It All, Houston’s Hayes Carll has experienced both paths.

“When I was younger I just thought it was a certain amount of drugs, alcohol, inspiration and catching lighting in a bottle,” says Carll of his initial approach to songwriting. “But if I didn't have that I’d just give up. I realized more and more that inspiration is great but you gotta know what to do with it.”

Carll will be returning to Houston and ending his busy year with a performance at The Heights Theater on Friday, December 17 for an early and late show. “I consider Houston home even though I live in Nashville,” says Carll.

“To me Houston’s where it all started. I sort of lived in satellite towns but Houston is the mecca that I’d come to and where things first started happening for me career wise. It’s really cool to get to wrap the year up at home.”

Carll has had a busy year releasing You Get It All, live streaming his Alone Together Tuesday’s wrapping up 57 episodes and maintaining a steady connection to his fans via Patreon.

"One of the most important things I've been apart of was to create that show and make that connection and give people a place to be during the pandemic," says Carll of his Tuesday series which he may pick back up again next year during touring breaks. "I'm hearing from a lot of people that it really helped them and I know it really helped me so that just feels significant to me and I'm proud of what we did."

Carll has always had a knack for connecting with people and shining as a songwriter with his ability to balance humor with sadness to convey the human condition as well as his own personal experiences on and off the road but on You Get It All his level of maturity and depth show like never before.

“A big part of happiness to me is knowing that you can put your head down on the pillow at night knowing that you gave it all that day and I'm not sure I’ve felt like that with my music in the past. With this record I feel like I gave it my all.”

"With this record I feel like I gave it my all.”

You Get It All delves deep into the inner workings of relationships people have with their partners, families, themselves and even God, something Carll says interests him more and more these days as he’s more into the process of “turning over the rocks” to see what’s underneath.
On “Nice Things” Carll taps the voice of God as she gently scolds mankind for what they’ve done to their home, a concept that Carll and Brothers Osborne wrote out together beginning with the idea of a woman scolding her husband for some trivial damage to their home and then deciding to zoom out and tell a wider story therefor increasing the effectiveness of the message.

“I could tell everybody you're messing up, but nobody wants to listen to me. God you have to stop and listen to so we figured God would be the one deity or thing that could come down and lecture everybody gently and they might have to listen. Then we figured if there's a God, it's just as likely to be a female as a male so why not put that twist on it.”

“If I try to talk politics outside of the music people let me know real quick what they think about it, so I've learned that the hard way and that's everybody's prerogative. As far as putting stuff in the music, I don't feel like hitting people over the head with my beliefs and I don't necessarily enjoy preaching to the choir, that feels pretty hollow to me,” says Carll.

“I always use Todd Snider’s quote, ‘I don't write these songs to change anybody's mind, I write them to ease my own’, I’ve always loved that approach because I know for myself it's really hard to change my mind if you come at me a certain way but if you can do it with respect, humor and a little empathy I'm all ears.”

Carll also tells the heartbreaking story of a life affected by Alzheimer’s in “Help Me Remember” as the narrator begs the listener to ground them in their memories, a song Carll says was inspired in part by his own memories of his grandfather's dementia.

“My grandfather was a really loving and sweet guy but I remember one day he was not being those things and my dad pulled me aside and he said don't remember your grandfather this way, this is not who he is or was.”

“It’s an epidemic and it's heartbreaking for all the people who suffer from it and all their families and caregivers as well. I was so shocked by the stats when the Alzheimer's Association told me what they were but I wasn't prepared when I put the song out for all the friends and all the stories that came through from people. It was overwhelming and heartbreaking.”

You Get It All frequently touches on the complexity of romantic relationships and marriage  and the title track describes the whole package that partners often get from one another, whether they want it or not. Carll’s own wife Allison Moorer not only served as inspiration behind many tracks, but also as co-producer in the studio along with Kenny Greenberg, a process Carll says was “natural” in the studio. .

“She’s really great at helping me articulate my vision in the studio. During the pandemic we were just sitting there every night talking life but also talking art, creativity and what it is we are up to so in the studio she's able to then translate that to the musicians,” he says of his wife’s talent in the studio.

“I enjoy having my life partner be a creative partner, it's pretty satisfying and gratifying to create and make stuff with her.”  Carll credits his wife for frequently pushing him in his songwriting to examine the reason behind the songwriting and his messages.

"I take it all more seriously now," says Carll. "I enjoy the craft more now than I used to. I've always loved songwriting but I think earlier in my career I relied more on inspiration and I didn't have a ton of discipline. I still don't have a ton of discipline but I have more than I did and I recognize it as a job more than I did. As I get older having better tools and a better understanding of my craft is just more important to me."

Hayes Carll will perform on Friday, December 18 at The Heights Theater,339 W. 19th. Early show at 7 p.m. late show at 9:45 p.m. $24.
KEEP THE HOUSTON PRESS FREE... Since we started the Houston Press, it has been defined as the free, independent voice of Houston, and we'd like to keep it that way. With local media under siege, it's more important than ever for us to rally support behind funding our local journalism. You can help by participating in our "I Support" program, allowing us to keep offering readers access to our incisive coverage of local news, food and culture with no paywalls.
Make a one-time donation today for as little as $1.