According to Christian Larson, the relationship between Houston, its music fans and the heavy metal genre is a complicated one. To fully explore its nuances would require “a whole interview on its own, with some beers or something,” Larson said.

One day, we may persuade Larson to navigate us through that territory with a few good brews, but for now we’ll note that he is leading a charge to solidify the bonds between Houston music fans and all things metal. He’s been at it for years as an artist, with local stalwarts (and frequent Houston Press Music Award winners) Venomous Maximus and, more recently, with his new outfit, the black metal band Necrofier. Now, as organizer of Hell’s Heroes Festival, which returns for its second annual installment this weekend, he and his cohorts are actively bringing important metal acts and informed fans of the music to Houston.

Fans from everywhere are expected to converge upon White Oak Music Hall this Saturday for a day-long fest of international underground metal bands, a hand-picked mix of acts which includes a pair of Canadian headliners in speed metalists Exciter and Ontario’s Razor, which has been delivering its brand since 1983.

“Stuff for this year, the stuff that a lot of people are freaking out about is Razor and Exciter coming,” Larson said. “I don’t think Razor’s ever played here and Exciter hasn’t played here since like ’85. There’s a big resurgence of this traditional heavy metal in the underground currently."

Those veteran acts will join new generation bands like co-headliner Power Trip on the bill. The Dallas group is one modern metal’s most exciting acts and recently had a track listed as part of Adult Swim’s Singles 2018 collection. The group is so excited about the event it’s bringing special t-shirts to commemorate Hell’s Heroes II.

"Power Trip is incredibly stoked to be a part of the Hell's Heroes II fest line up," said the band’s vocalist Riley Gale, in a prepared statement. "Getting to share a bill with bands like Razor, Helstar and Exciter is a huge honor for us. We don’t get invited to many of the ‘trve’ or more ‘old school’ metal fests, so to have the Hell's Heroes organizers invite us means a lot because it shows that they understand Power Trip is about the old guard just as much as the new."

Houston’s own power metal vets Helstar and Oath of Cruelty are in the lineup. Other notables include California acts Omen, Hellfire and Haunt, as well as Virginia act Bat, which features members of Municipal Waste and DRI.

In all, more than a dozen acts are expected to unleash metal fury upon the gathered on Saturday. Larson expects the second-year crowd to be solid.

“It’ll probably be twice as big as it was last year,” he said. “Some of these bands you’ll see play on the coasts, some of them haven’t been here in forever or just haven’t played here before. Texas is just less played by bands in general, from any genre, than the coasts.” 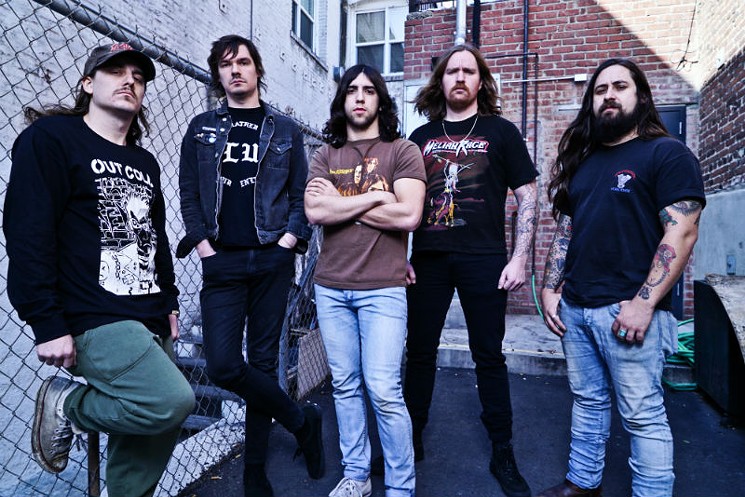 Some fans are expected to trek from afar to catch these bands because, Larson notes, Hell’s Heroes Fest may be the only place they can see such a gathering without leaving the continent.

“For festivals like this, there’s a bunch of them in Europe but there’s not really any left in America,” Larson noted. “There’s fewer of them happening in the States, so there’s a lot of people coming from California, all over the United States. We have people from Australia coming.”

Those who arrive early can catch a pre-fest show slated for Warehouse Live on Friday night. That show is practically a mini-fest and a good primer for Saturday’s festival proper at White Oak Music Hall. Oregon doom metal trio YOB and recent Juno Award winners Voivod will headline Friday’s set, with Amenra, Sleeping Ancient and Scrollkeeper on as support.

In addition to pulling these events together, Larson’s been concentrating on work with Necrofier, which self-describes as “born into darkness in the spirit of heavy melodic black metal in the old vein.”

“Everything’s good,” he says of his new band, which released a cassette EP late last year and is now working on a full-length album. “We did two shows in December with this band UADA, both of them were really great. And then we just did three shows with Goatwhore, like around South By. Yeah, the new band is going well.”

That brief diversion aside, Larson turned his attention back to this weekend’s event and its objectives.

“As long as the lineup’s good, I think, hopefully, people will keep coming,” he said of the festival’s biggest 2019 objective. “This is just building on last year. It’s the same kind of vibe. It’s like heavy metal, thrash, everything mixed together. Having Power Trip and Razor especially, all that together helps put this fest over the top.”

Hell's Heroes Festival returns for its sophomore outing, 3:30 p.m. Saturday, April 13 at White Oak Music Hall, featuring Power Trip, Exciter, Razor and more. Tickets are $27.50 The festival kicks off with a pre-fest show Friday night at Warehouse Live, 813 Saint Emanuel. YOB and Voivod headline the set. Doors at 7 p.m. and music at 8 p.m., tickets $22-$25.
KEEP THE HOUSTON PRESS FREE... Since we started the Houston Press, it has been defined as the free, independent voice of Houston, and we'd like to keep it that way. With local media under siege, it's more important than ever for us to rally support behind funding our local journalism. You can help by participating in our "I Support" program, allowing us to keep offering readers access to our incisive coverage of local news, food and culture with no paywalls.
Make a one-time donation today for as little as $1.