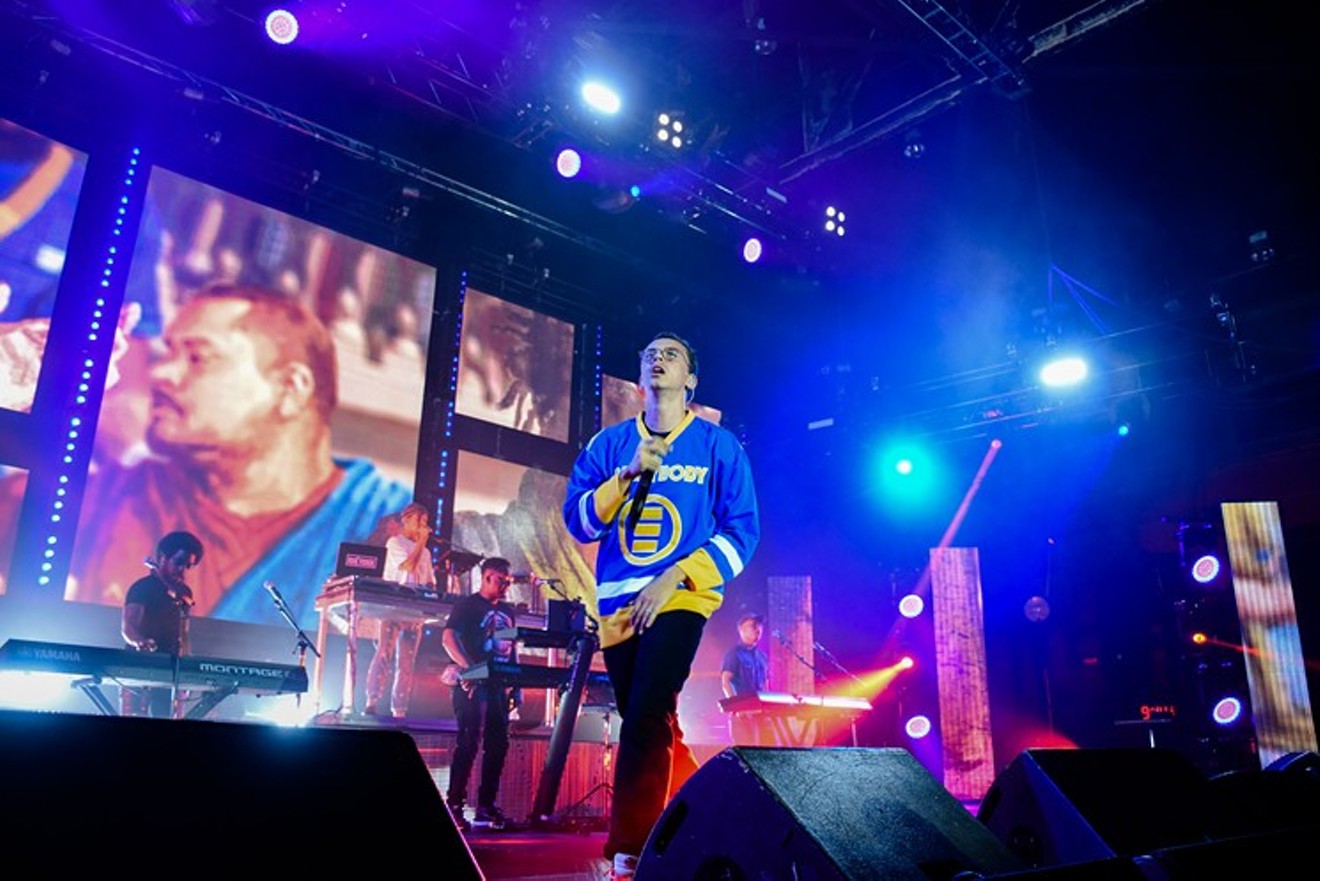 Logic at Revention Music Center in 2017 Photo by Francisco Montes
Last week's cold front was short-lived, but it made the Houston Cougars' loss to the Cincinnati Bearcats on Saturday a little less painful. Sporting disappointments aside, there may be hope for an extension. Rain today is expected to bring a stretch of pleasant days, extending into the weekend. As temperatures drop, we can't help but wonder how much more time we'd spend outside if it weren't so muggy here in the Bayou City. Hot or cold, wet or dry, there are plenty of concerts worth attending in Houston this week, and we've compiled the best of them for you here:

Pick of the Week:
Tenacious D
Revention Music Center – 10.16
Founded by Jack Black, one of the most beloved voices of our generation, and Kyle Gass, whose musicianship has been hailed by even Satan himself, Tenacious D has been writing comedy rock hits since 1994. The duo hit it big in 2001 with "Tribute," in which Black and Gass engage in a musical duel with the devil. (It's an even more comical take on the Charlie Daniels Band's classic "The Devil Went Down To Georgia.") With four albums and a movie to their name, Tenacious D will have plenty of material to choose from when they visit Revention Music Center tonight.

The Best of the Rest:
Maxo Kream
House of Blues – 10.18
On "Change, Maxo Kream sounds a lot like fellow Houstonian Z-Ro, his booming voice wavering only slightly as he simultaneously celebrates his success while bemoaning everything it cost him. Dead friends, broken alliances and codeine addiction are examined alongside Rolex watches and high-rise lofts, as if they couldn't exist independent of one other. Brandon Banks, Kream's latest release, continues to usher in a new era of Houston hip hop, one that continues to highlight stories that no one else seems willing to tell, without all the wood grain and candy paint references. On tour in support of Banks - which boasts guest verses from the likes of Travis Scott, Megan Thee Stallion and ScHoolboy Q, among others - Kream returns to the Bayou City this Friday for a performance at House of Blues.

NF
Revention Music Center – 10.18
Largely dismissed by rap critics as an unwelcome Eminem impersonator, Nate Feuerstein - better known as NF - has developed a cult following through lyric-driven melancholy that, despite its despair, sounds uplifting. Like Marshall Mathers, NF - a fellow Michigan native - uses his turbulent childhood as a muse, but he rarely pokes fun at himself (or others) the way Eminem was wont to do in his heyday. Instead, Feuerstein endlessly challenges himself, questioning his own talent, the validity of his success and even his faith. In doing so, the oft-overlooked MC offers throngs of despondent fans a beat to nod to as they work through their own struggles. On tour in support of The Search, which debuted at No. 1 on the Billboard 200 in July, NF visits Revention Music Center this Friday.

Logic
Smart Financial Centre – 10.19
Before he signed with Def Jam in 2013, Logic made a name for himself through a handful of mixtapes. A few years later, supported by the Grammy-nominated single "1-800-273-8255," his third studio album Everybody  was certified platinum. Since then, Young Sinatra has struggled to reconcile his status as an enlightened lyricist with his penchant for braggadocious wordplay. His latest release, Confessions Of A Dangerous Mind, saw the Maryland-born artist leaning toward the latter, reinforced by guest verses from fellow braggarts Eminem, G-Eazy, Gucci Mane and Wiz Khalifa. The dexterous, divisive rapper visits Smart Financial Centre this Saturday.

A Day To Remember
NRG Arena – 10.22
For the past decade and a half, A Day To Remember has been pairing blink-182's pop-punk sensibilities with the metalcore musings of August Burns Red. Replete with soaring, sing-along choruses, the Florida outfit's pop leanings are typically punctuated by dark, booming verses that evoke the likes of Bullet For My Valentine and Killswitch Engage. We can only hope that their latest single - produced by DJ Marshmello - is a one-off. On tour in support of their forthcoming seventh studio album, You're Welcome, ADTR will visit NRG Arena on Tuesday.
KEEP THE HOUSTON PRESS FREE... Since we started the Houston Press, it has been defined as the free, independent voice of Houston, and we'd like to keep it that way. With local media under siege, it's more important than ever for us to rally support behind funding our local journalism. You can help by participating in our "I Support" program, allowing us to keep offering readers access to our incisive coverage of local news, food and culture with no paywalls.
Make a one-time donation today for as little as $1.