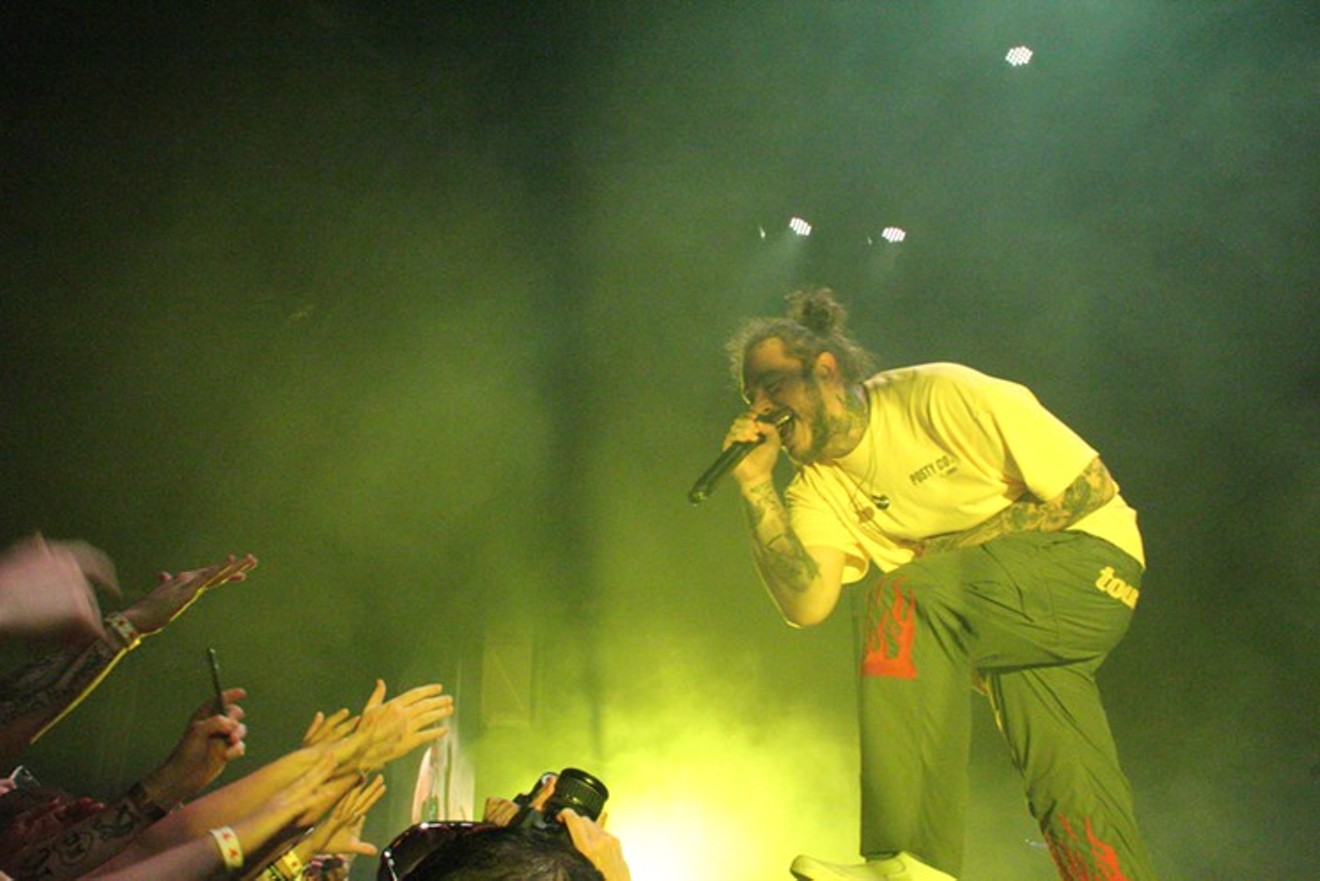 Post Malone at the Woodlands Pavilion in 2018 Photo by Matthew Keever
By the time this article is published, the Houston Astros should be the 2019 World Series champions. And if they aren't, that's OK. Because Game 7 will be played in Houston, and we're due for a win at home. Whether you're celebrating Houston's second title in three years or grumbling that the series is now even, you should take a minute to see the music coming to town over the next week. Because with concerts, there's no off season.

Pick of the Week:
Post Malone
Toyota Center – 11.05
Barely two weeks after finishing a 16-month tour supporting his second studio album, Beerbongs & Bentleys, Post Malone released his third. Doubling down on pop and veering even further from his designation as a rapper, the Dallas-born star rubs shoulders with the likes of Halsey and Ozzy Osbourne on his new record, and fans have fallen in love with his warbly vocals all over again. Many have predicted Post's downfall but in the four years since "White Iverson" turned him into a household name, the 24-year-old songwriter hasn't shown any signs of slowing. See him at Toyota Center on Tuesday.

The Best of the Rest:
Ray LaMontagne
Jones Hall – 11.01
Last year, Ray LaMontagne released his seventh studio album, Part Of The Light, as an attempt to put something positive out into a world that he felt was getting darker. "It just feels like the world is so ugly," he told the Houston Press last year. "Not all of it of course, but you don't have to look too far." LaMontagne hasn't released any new music since then, but his latest visit to Houston will showcase a fully acoustic performance from the New Hampshire native, which should excite fans just as much as a new record. See him at Jones Hall this Friday.

Khruangbin
White Oak Music Hall – 11.02
Born in Houston, Khruangbin have made quite the name for themselves. Over five years and three albums, the Bayou City trio has drawn on Thai, Spanish and Middle Eastern themes to put together an eclectic, genre-bending mix of tunes that has springboarded them into stardom. On tour in support of their third album, Hasta El Cielo, Khruangbin will perform at White Oak Music Hall this Saturday.

Gwar
Warehouse Live – 11.02
Some have described GWAR as a mixture of KISS, World Wrestling Entertainment and the Rocky Horror Picture Show. Others have dismissed the heavy metal aliens as nonsense. Neither assessment is wrong, but even detractors admit that the band's live shows are the stuff of legend. They've done everything onstage, including disemboweling Paris Hilton, castrating Michael Jackson and tearing off Lady Gaga's breasts. On tour in support of their 14th studio album, The Blood Of Gods, GWAR will visit Warehouse Live with Sacred Reich, Toxic Holocaust and Against The Grain on Saturday.

Trisha Yearwood
Smart Financial Centre – 11.03
Trisha Yearwood has kept her fans waiting long enough. For the first time in five years, the Georgia-born gal will embark on a solo tour in support of her latest offering, her 14th studio album, Every Girl. Yearwood's musical career was on hold while she focused on publishing cookbooks and working on a successful series that aired on the Food Network. Her recipes are delicious, but so is her music, which is why so many fans are excited to see Yearwood perform at Smart Financial Centre on Sunday.
KEEP THE HOUSTON PRESS FREE... Since we started the Houston Press, it has been defined as the free, independent voice of Houston, and we'd like to keep it that way. With local media under siege, it's more important than ever for us to rally support behind funding our local journalism. You can help by participating in our "I Support" program, allowing us to keep offering readers access to our incisive coverage of local news, food and culture with no paywalls.
Make a one-time donation today for as little as $1.