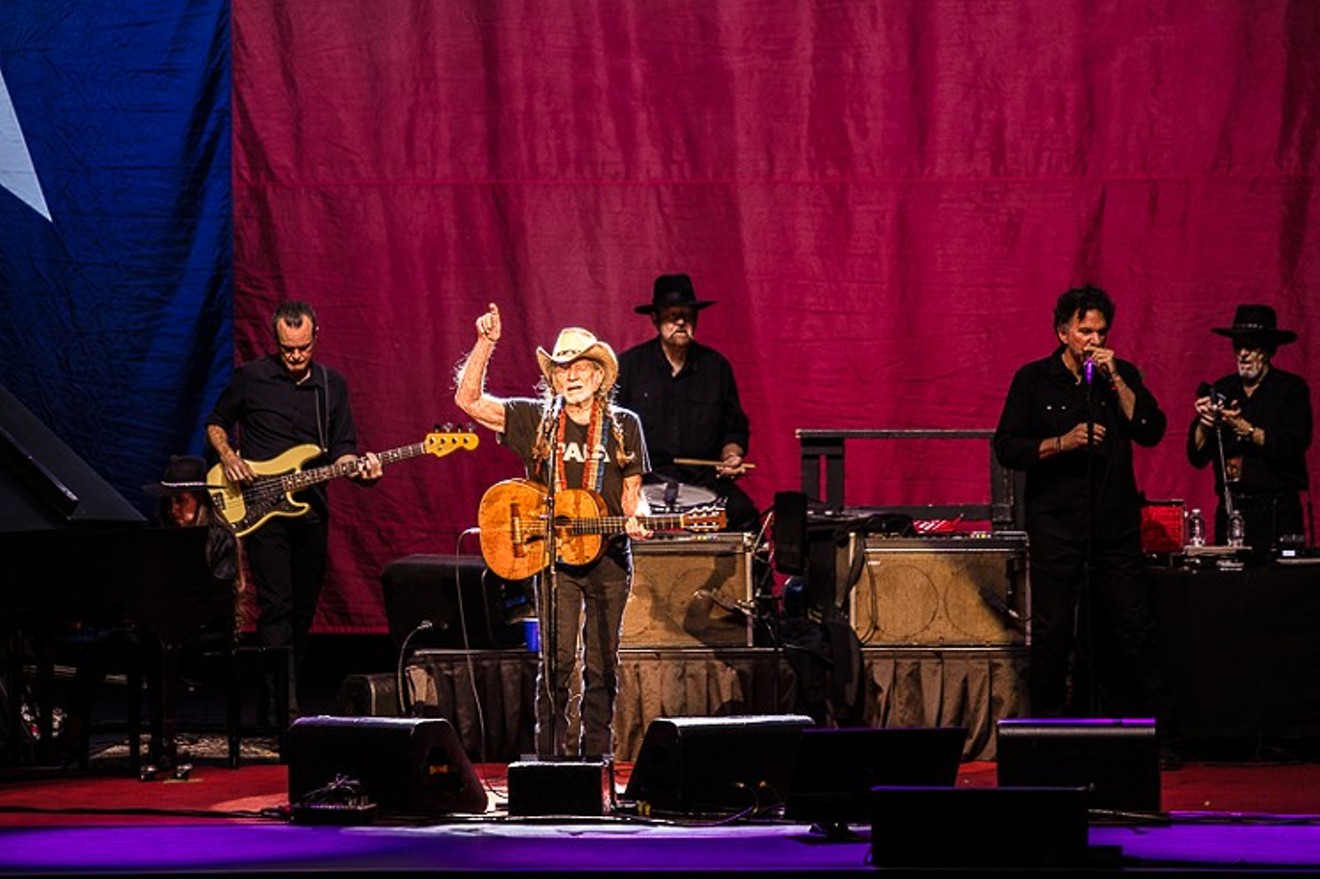 Willie onstage at Smart Financial Centre last November Photo by Violeta Alvarez
If yesterday was any indication, we're in for a pretty unpleasant week. In Houston, bad weather typically refers to temperatures in or near the triple digits and high levels of humidity; but this week, the Bayou City will experience a legitimate cold front, with temperatures dipping into the 20s after sundown. So wrap your pipes, throw on some long underwear and get your butts inside some of the indoor venues, which will be warmed to perfection in contrast to the frigid conditions outside.

Pick of the Week:
Willie Nelson
Smart Financial Centre – 11.18
At this point, everyone should know who Willie Nelson is. The redheaded stranger has been performing for more than 50 years now, and he has collaborated with everyone from Waylon Jennings and Ray Charles to Snoop Dogg and Norah Jones. On tour in support of his 69th studio album, Ride Me Back Home, the iconic singer songwriter will visit Smart Financial Centre in Sugar Land on Monday.

The Best of the Rest:
Kevin Gates
Revention Music Center – 11.13
Kevin Gates burst onto the scene in 2016 with Islah, which he named after his daughter. The album, which received critical and commercial acclaim for its melodies and emotional depth, was eventually certified double platinum in the United States. Five mixtapes later, the Louisiana native has returned with his latest offering, I'm Him. On tour in support of his sophomore record, Gates is scheduled to perform at Revention Music Center tonight.

Deadmau5
Revention Music Center – 11.14
Canadian producer and DJ Deadmau5 is one of the most iconic acts in EDM, if for no other reason than his Mickey Mouse-shaped helmet. Aesthetics notwithstanding, Deadmau5's standing in the genre has been cemented over the years through intricate stages and energetic live performances. On tour in support of mau5ville: Level 3, which was released in February, Deadmau5 will visit Revention Music Center on Thursday.

Ryan Bingham
White Oak Music Hall – 11.17
Ryan Bingham plays grief-stricken country. His scratchy vocals exude heartache and bad luck at every turn, even when the New Mexico native sings of greener pastures and hope for the future. In 2009, "The Weary Kind" launched Bingham into the national spotlight, and he hasn't slowed down since. On tour in support of his sixth studio album, Bingham is scheduled to perform at White Oak Music Hall on Sunday.

Jaden Smith, Willow Smith
Warehouse Live – 11.18
Last month, siblings Jaden and Willow Smith - the children of Will and Jada Pinkett - announced a co-headlining tour together. Jaden has two records to his name, both of which pleasantly surprised critics, while Willow's only real success has come in the form of the viral hit "Whip My Hair" back in 2010. On tour in support of their latest records, Erys and Willow, the Smiths will visit The Ballroom at Warehouse Live on Monday.
KEEP THE HOUSTON PRESS FREE... Since we started the Houston Press, it has been defined as the free, independent voice of Houston, and we'd like to keep it that way. With local media under siege, it's more important than ever for us to rally support behind funding our local journalism. You can help by participating in our "I Support" program, allowing us to keep offering readers access to our incisive coverage of local news, food and culture with no paywalls.
Make a one-time donation today for as little as $1.