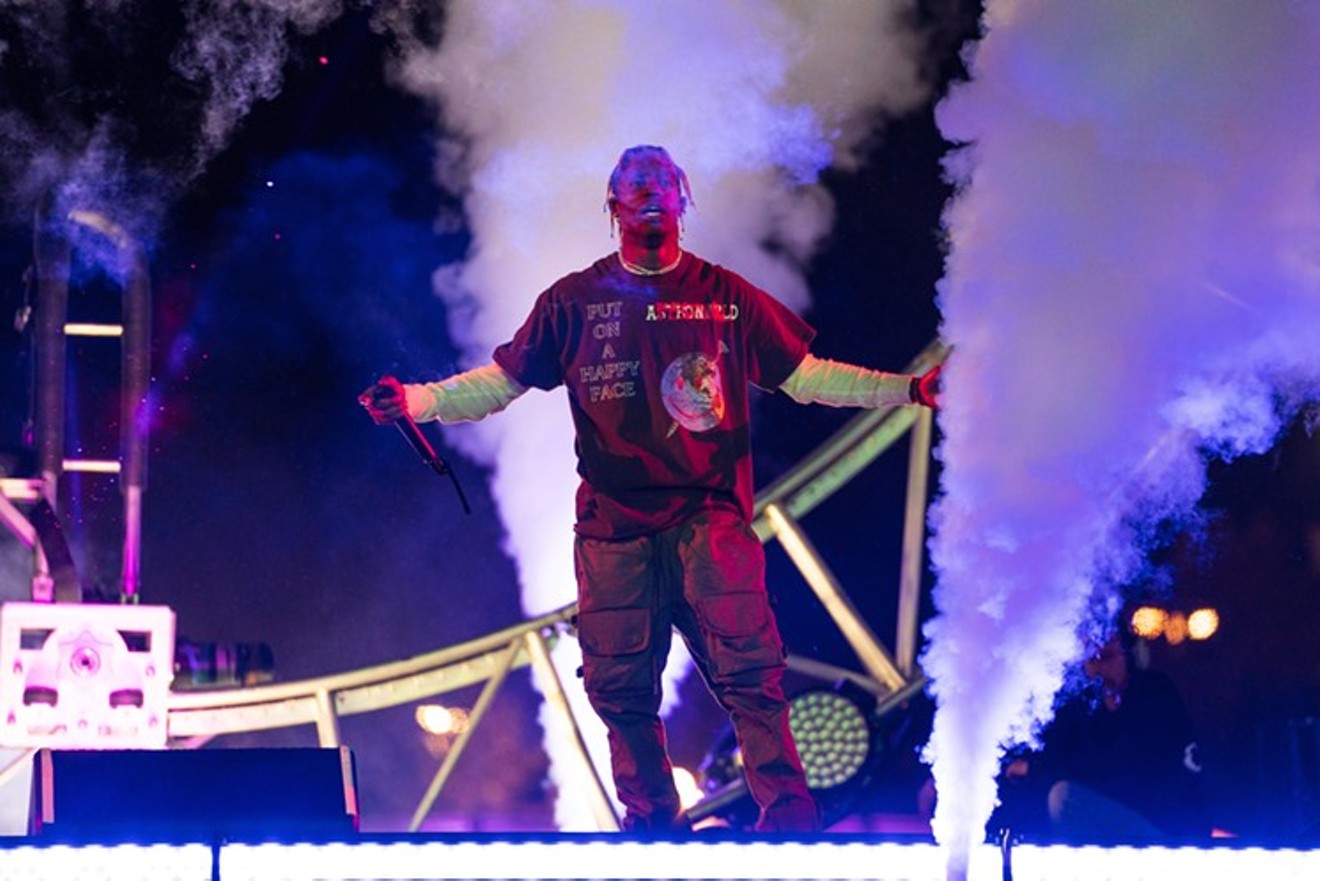 The current king of rap returns home this week. Photo by Conner Fields
If there was a true winner of The Grammys, which took place over the weekend if you haven’t heard, then I think we could all agree that it’s RodeoHouston. After all, they had the foresight to book Kacey Musgraves — of the year winner — and Cardi B — best rap album of the year winner — well in advance of the awards being handed out. It never hurts to be able to kick off your season with a set from someone at the top of the music industry, whether you think the Grammys matter or not. I only mention this because this is the last week before RodeoHouston kicks off and begins to dominate this here weekly roundup for three weeks. Get warmed up for all the excitement with these sadly mutton-'-free shows.

With Drake, Kanye and so forth still on the bench early in the year, the rap game continues to belong to Travis Scott. Sure, this return to Houston isn’t quite as big as when he was here a few months back with his own festival, but if you didn’t make it to Astroworld this is the next best thing, provided the show doesn’t get delayed for technical reasons. Expect Scott to go extra hard for this most recent homecoming.

The Best of the Rest:
Coheed and Cambria
2.15 - House of Blues

I too am disappointed that we’re not getting that joint Mastodon/Coheed tour that’ll be part of the busy summer touring season, but I don’t think you should turn up your nose at the chance to see the band on this swing through town. Current setlists are a solid mix of old stuff with latter-era material, and just because you’ve heard “Welcome Home” a half a dozen times live doesn’t mean it doesn’t still rule when the opening riff kicks in. Be sad for what we’re not getting, but embrace what we are too.
Glitchfest
2.15 - Satellite Bar
There are unwritten rules of the Houston music scene, and one of those is “Always go see B L A C K I E when you get the chance.” As such, I have to recommend Glitchfest, a digital art and music festival that the local sonic genius is a part of. You’ll get a night of EDM and hip-hop on two stages for a night of music you won’t soon forget. Organizers are promising an event that is loud and provocative for anyone 18 years or older willing to experience it.
Paul Van Dyk
2.16 - Stereo Live

Do you remember the time Paul Van Dyk played over at Arena Theater and the whole thing felt really weird but in a really refreshing way? This is not to say that you should expect his performance at Stereo Live to be anything less than stellar, just that I appreciate any artist willing to take bookings that are slightly left of center; after all, if you can rock a room with a spinning stage, you should kill in a regular performance space. Another week, another dance music legend in town; these are special times, Houston.
Courtney Barnett
2.18 - White Oak Music Hall

Courtney Barnett feels like, in the long run, she’s going to end up being one of those artists who gets the tag “your favorite artist’s favorite artist.” She’ll be a cult favorite for years to come, and you’ll breathlessly await every new release as soon as it’s announced. I believe this is her first gig in Houston, and odds are good it’ll have been worth the wait if only to hear “Pedestrian at Best” in person.
KEEP THE HOUSTON PRESS FREE... Since we started the Houston Press, it has been defined as the free, independent voice of Houston, and we'd like to keep it that way. With local media under siege, it's more important than ever for us to rally support behind funding our local journalism. You can help by participating in our "I Support" program, allowing us to keep offering readers access to our incisive coverage of local news, food and culture with no paywalls.
Make a one-time donation today for as little as $1.