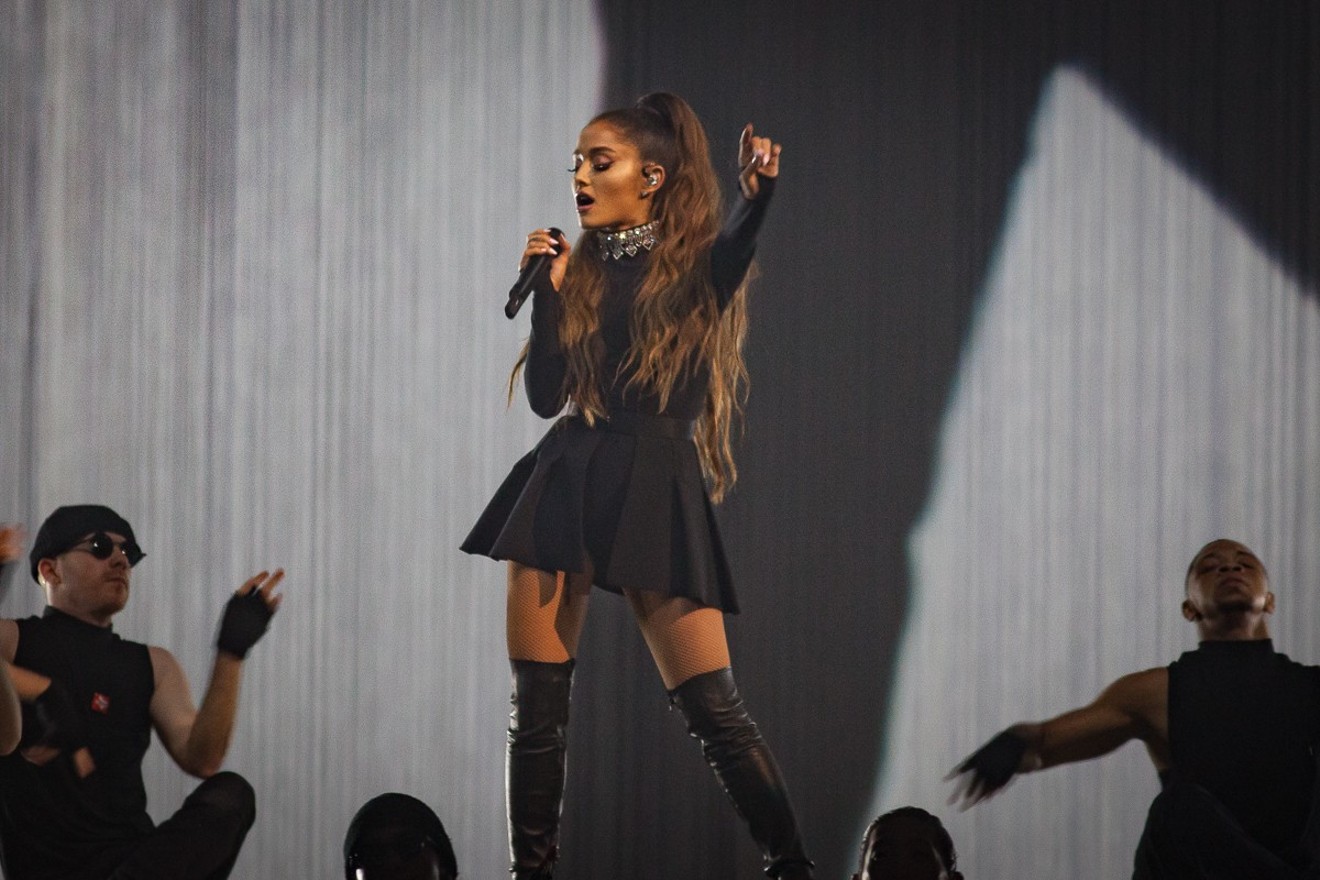 Ariana Grande onstage at Houston's Toyota Center in April 2017 Photo by Eric Sauseda
We’re still about a month away from summertime, but temperatures in the Bayou City are already reaching the high 80s. Fortunately, Houston boasts plenty of air-conditioned venues where residents can find refuge. With that in mind, most of this week’s must-see events are slated to take place indoors. And while scattered thunderstorms are expected on Saturday, we doubt any of Dave Matthews’ diehard fans will be deterred. Here’s what’s on tap for this week:

Pick of the Week: Ariana Grande
5.20 - Toyota Center
Three and a half months removed from the release of her fifth studio album, thank u, next, Ariana Grande will bring her “Sweetener World Tour” to Houston’s Toyota Center for her second visit in 13 months. Supported by her most ambitious album to date, Grande’s upcoming visit will likely to be one of the best shows of the year. Don’t take our word for it either. Even Nicki Minaj admits that “Ariana run pop.”

The Best of the Rest:
The Mixtape Tour
5.15 - Toyota Center
Calling all Blockheads and ‘80s babies! The Boston boy band New Kids On The Block are on tour in support of the 30th anniversary of their breakthrough album, Hangin’ Tough. Supported by the rap duo Salt-N-Pepa and the hip hop trio Naughty By Nature, NKOTB’s “Mixtape Tour” looks to be an upbeat, sentimental outing for many.

Lil Pump
5.17 - Revention Music Center
While he’s not much of a lyricist – see: “Gucci Gang” – Lil Pump has managed to carve out quite the niche for himself in the rap game over the past few years. After using Soundcloud as a jumping-off point, Pump signed with Warner Bros. Records at the tender age of 16. With two studio albums to his name, longtime fans can expect to hear plenty of trap hits from the Miami native.

Dave Matthew Band
5.18 - Cynthia Woods Mitchell Pavilion
It took Dave Matthews Band six years to write, record and release their ninth studio album, but the band never left fans wanting for live performances. During the time between 2012’s Away From The World and 2018’s Come Tomorrow, DMB visited Houston countless times, almost always selling out one of the city’s largest amphitheaters. This go-round looks to be more of the same, including a large crowd.

The Songs & Stories Tour
5.18 - House of Blues
Nostalgia tours are nothing new, but this acoustic outing flaunts quite an ensemble cast. Everclear’s Art Alexis has teamed up with Fountains of Wayne’s Chris Collingwood, Eve 6’s Max Collins and Marcy Playground’s John Wozniak for a North American tour that will bring some of the most iconic alt-rockers of the late ‘90s to the Bayou City for an intimate performance this weekend. It might be your only chance to hear “Santa Monica,” “Stacy’s Mom,” “Inside Out” and “Sex And Candy” all in one night.

Love Street Music Fest 2019
5.19 - Karbach Brewing Co
As if Houstonians needed any other reason to visit one of their favorite (formerly) local breweries, Karbach this weekend will host its third annual Love Street Music Festival. Current chart-toppers Walk the Moon and Bishop Briggs top this year’s lineup, supported by regional favorites Toadies and Houston’s own Wrestlers and VODI. The brewery drew quite a bit of ire from the community after it was acquired by Anheuser-Busch in 2016, but good beer and good tunes may be just enough to make things right again.
KEEP THE HOUSTON PRESS FREE... Since we started the Houston Press, it has been defined as the free, independent voice of Houston, and we'd like to keep it that way. With local media under siege, it's more important than ever for us to rally support behind funding our local journalism. You can help by participating in our "I Support" program, allowing us to keep offering readers access to our incisive coverage of local news, food and culture with no paywalls.
Make a one-time donation today for as little as $1.