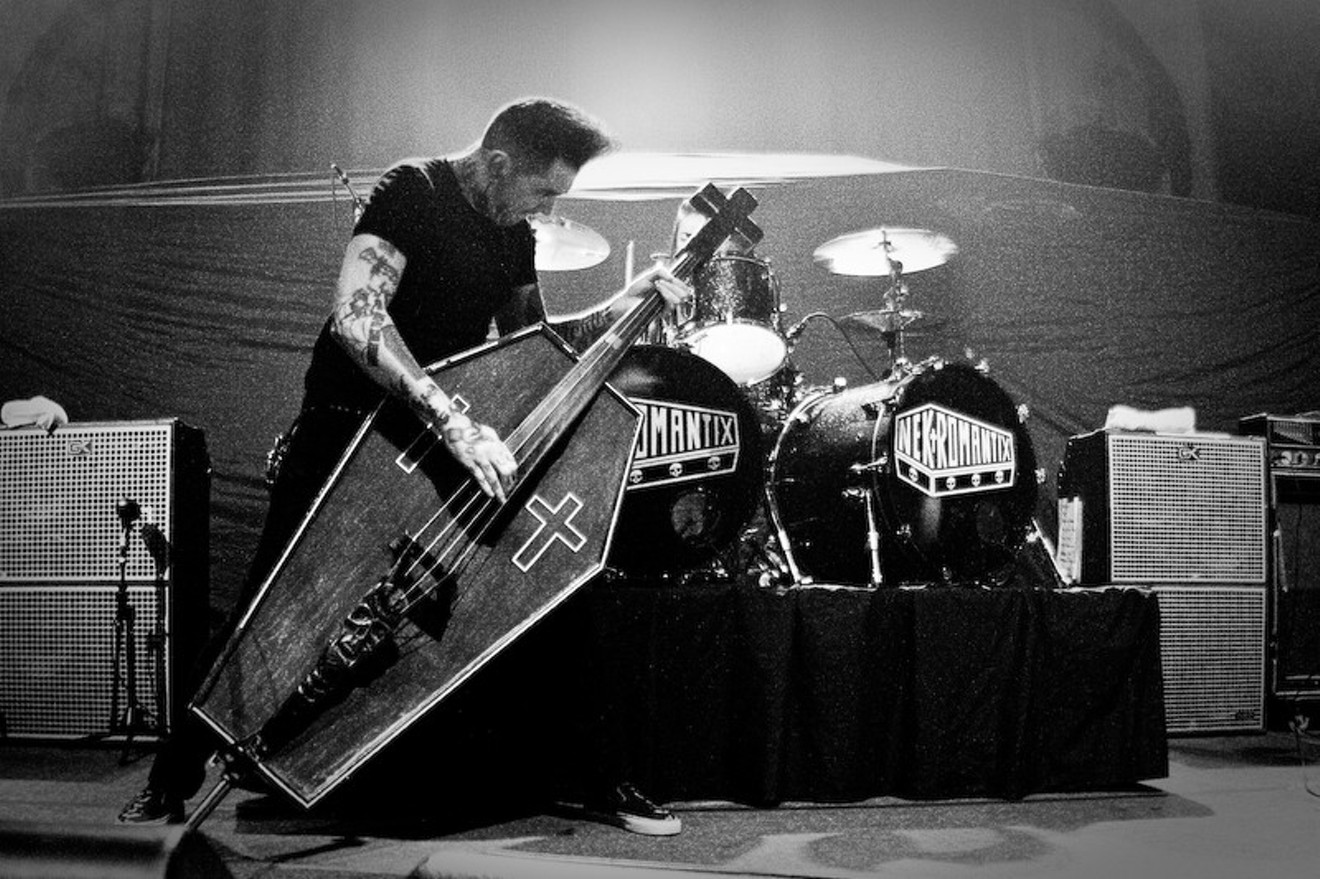 Nekromantix opening for Rob Zombie at Revention Music Center (formerly Verizon Wireless Theater) in 2010 Photo by Eric Sauseda
While several local arenas will play host to graduation ceremonies this week, there are plenty of notable shows worth attending for those of us who don’t have friends or family walking. Fortunately for both graduates and would-be concert goers alike, this week’s forecast is rain-free, with partly overcast to mostly sunny days ahead. Despite the clouds, however, Houstonians would do well to take note of National Sunscreen Day this Friday.

Pick of the Week: Nekromantix
5.24 – The Secret Group
Psychobilly is a tragically underappreciated genre, but Nekromantix couldn’t care less. For the past 30 years, this Danish-American trio has displayed a unique swing-dance sensibility alongside a punk-rock attitude, accentuated by tongue-in-cheek lyricism about the macabre. Anyone who hasn’t seen frontman Kim Nekroman play his coffinbass live should do themselves a favor and visit The Secret Group this Friday.

The Best of the Rest:
Aaron Carter
5.22 – Scout Bar
Piggy-backing off the success of his brother’s band, Aaron Carter launched a solo career at the tender age of 9. Given his child-star status, it came as no surprise when he encountered a fair bit of legal trouble during his late teens and early 20s. But the younger Carter has been on the mend in recent years, admitting himself into a rehabilitation facility and releasing his first album in 16 years, 2018’s LOVE, which saw Carter effortlessly integrating current pop trends into his music.

blackbear
5.23 – Revention Music Center
With a leg on each side of rap and pop, blackbear has joined the ranks of Drake and Post Malone in the ever-growing class of boastful crooners who just can’t seem to find happiness. His latest release, ANONYMOUS, sees the Florida native discussing depression and heartbreak, while occasionally boasting about his accomplishments, atop infectious melodies. Self-pity and chauvinism abound, but the music sure is catchy.

Tech N9ne
5.23 – White Oak Music Hall
Named for his rapid-fire delivery, Kansas City native Tech N9ne has had one of the most prolific careers of anyone in the rap game. With 21 studio albums to his name, never mind countless features, it’s a wonder Aaron Yates hasn’t run out of words to rhyme. On tour in support of his latest outing, N9na, Tech will bring his dynamic, atypical lyricism to Houston’s White Oak Music Hall this Wednesday.

Mystikal and Juvenile
5.24 – Arena Theater
It has been 20 years since “Danger (Been So Long)” and “Back That Thang Up” were topping the charts, but plenty of us still know all the words by heart. Which is why, for the second time in the past five years, New Orleans natives Mystikal and Juvenile have teamed up for a co-headlining tour that will bring their ‘90s era jams to Houston’s Arena Theater for a midweek pick-me-up.

Lionel Richie
5.28 – Smart Financial Centre
One of the most successful balladeers of all-time, Lionel Richie needs no introduction. He hasn’t released a proper record since 2012, but longtime fans will surely be content to hear Richie perform a myriad of classic cuts anyway, namely “Say You, Say Me,” “Endless Love,” “All Night Long” and, of course, “Hello,” for which this latest tour is named.
KEEP THE HOUSTON PRESS FREE... Since we started the Houston Press, it has been defined as the free, independent voice of Houston, and we'd like to keep it that way. With local media under siege, it's more important than ever for us to rally support behind funding our local journalism. You can help by participating in our "I Support" program, allowing us to keep offering readers access to our incisive coverage of local news, food and culture with no paywalls.
Make a one-time donation today for as little as $1.