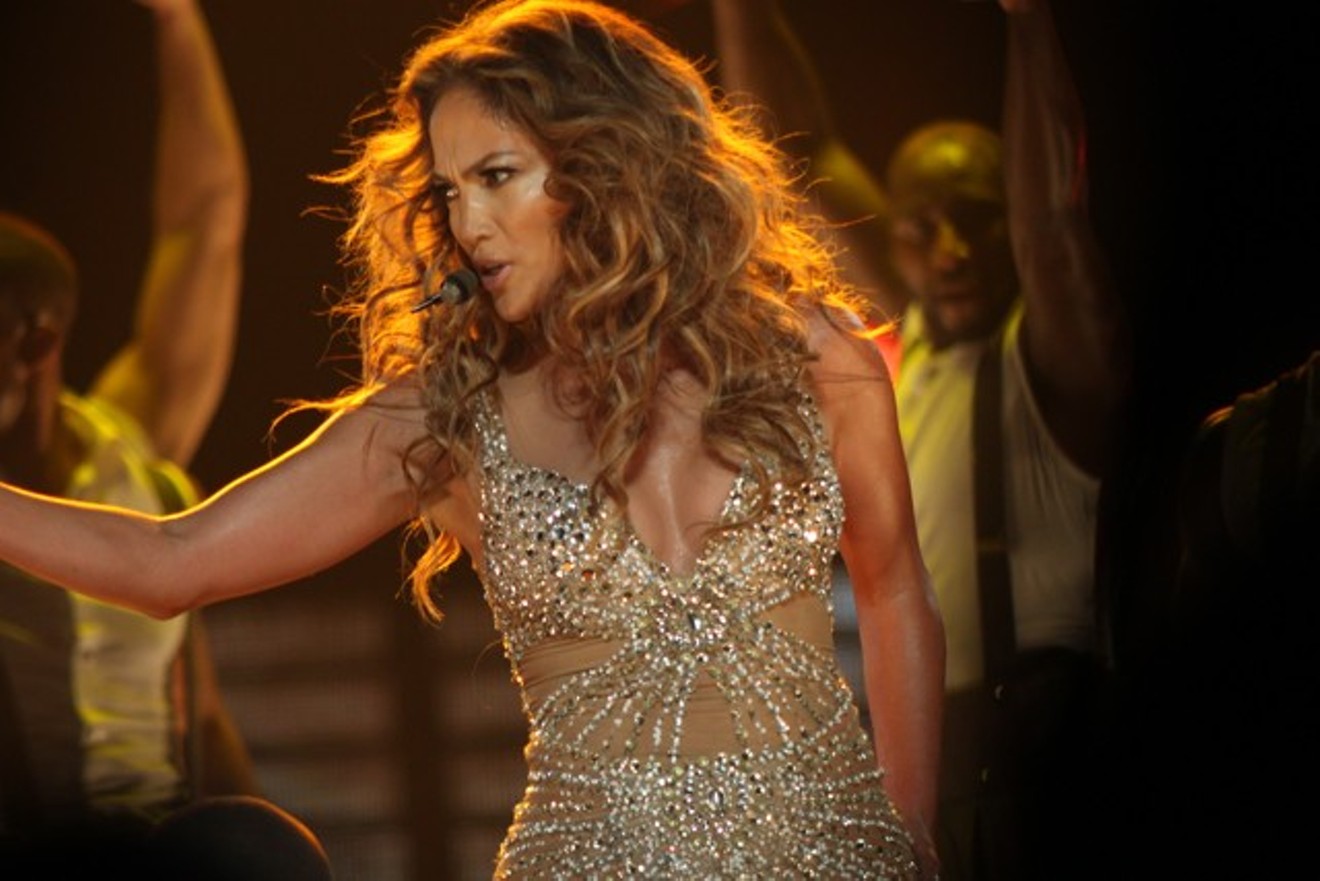 JLo onstage at Houston's Toyota Center in 2012
Photo by Marco Torres
With Summer officially beginning this weekend, it makes sense that so many of the names coming through Houston are so impressive. The season is a favorite for concertgoers for a reason, after all, the high temperatures be damned. This week, we highlight one of the most respected names in pop, an indie-rap duo, some local favorites and a Canadian celebrating the Toronto Raptors' recent championship, among others. Temperatures aren't in the triple-digits yet, but they're getting close so be sure to drink at least one water in between each beer.

Pick of the Week: Jennifer Lopez
06.25 – Toyota Center
It's crazy to think about at this point, but Jennifer Lopez began her career as a backup dancer. From there, she pivoted into both acting and singing, both of which have proven fruitful for the New York native. She has starred in dozens of films and released 14 studio albums over the past 20 years, selling an estimated 80 million records along the way. Jenny will bring her "It's My Party Tour" - a celebration of her 50th birthday - to Houston's Toyota Center next Tuesday, and who wouldn't want to party with JLo? Lest we forget, she's just a simple girl from the Bronx.

The Best of the Rest:
Twenty One Pilots
06.21 – Toyota Center
Due to increased demand, Twenty One Pilots will visit Houston's Toyota Center for the second time in six months this weekend. Their return will give fans another chance to see the duo on "The Bandito Tour." Vocalist Tyler Joseph and percussionist Josh Dunn will take concertgoers on a journey through Dema, a fictional city set the sage for their last album, Trench, which has sold more than a million copies worldwide. If their performance in November was any indication, this should be quite the pilgrimage.

Ruthie Foster
06.21 – McGonigel’s Mucky Duck
Three-time Grammy Award nominee Ruthie Foster brings her soulful blend of blues and folk to McGonigel's Mucky Duck this Friday. The Texas native hasn't released any new music since 2017's Joy Come Back, but we'll take any excuse to hear her perform live. Because this is the woman who Rolling Stone called "pure magic to watch and hear." Her last record was written while she was splitting custody of her then-5-year-old daughter, so fans can expect some heartfelt, powerful performances - more of the same for Mrs. Foster.

Young Mammals
06.22 – Continental Club
Originally billed as The Dimes before a copyright claim forced them to change their name, Young Mammals have been a mainstay of the local music scene for more than a decade now. Supported by the titular single, "Lost In Lima," the beloved indie-rock quarter will celebrate the release its fourth record — their first in nearly two years — at the Continental Club this weekend. The band will be supported by Astragal, Vivienne Styg and DJs Manny Parra and LUZ.

Disrupt Festival
06.23 – Cynthia Woods Mitchell Pavilion
Sponsored by Rockstar Energy Drink, the inaugural Disrupt Festival will bring several heavy hitters from the mid-2000s to the Cynthia Woods Mitchell Pavilion this weekend for a full day of emo, alternative, post-hardcore, pop-punk and metalcore. The Used, Thrice and Circa Survive are just the top three of nearly a dozen acts that will perform at the event. Hyro the Hero kicks things off at 1:30 p.m., so hydration is suggested for concertgoers who plan to come early and stay for the entire day.

Nav
06.24. – House of Blues
On tour in support of his latest studio album, Bad Habits, Canadian rapper Nav will visit House of Blues early next week. The Toronto-born artist of Punjabi descent has racked up hundreds of millions of views on YouTube, and his two records have both made appearances on the Billboard 200, but his short-lived fame hasn’t been without controversy. He has been taken to task for his liberal use of the N-word, but a generic apology and pinky promise to refrain from saying it in the future appeased fans enough to land him guest appearances from heavy hitters such as Meek Mill, Futures, Young Thug and The Weeknd, who signed Nav to his record label in 2016.
KEEP THE HOUSTON PRESS FREE... Since we started the Houston Press, it has been defined as the free, independent voice of Houston, and we'd like to keep it that way. With local media under siege, it's more important than ever for us to rally support behind funding our local journalism. You can help by participating in our "I Support" program, allowing us to keep offering readers access to our incisive coverage of local news, food and culture with no paywalls.
Make a one-time donation today for as little as $1.