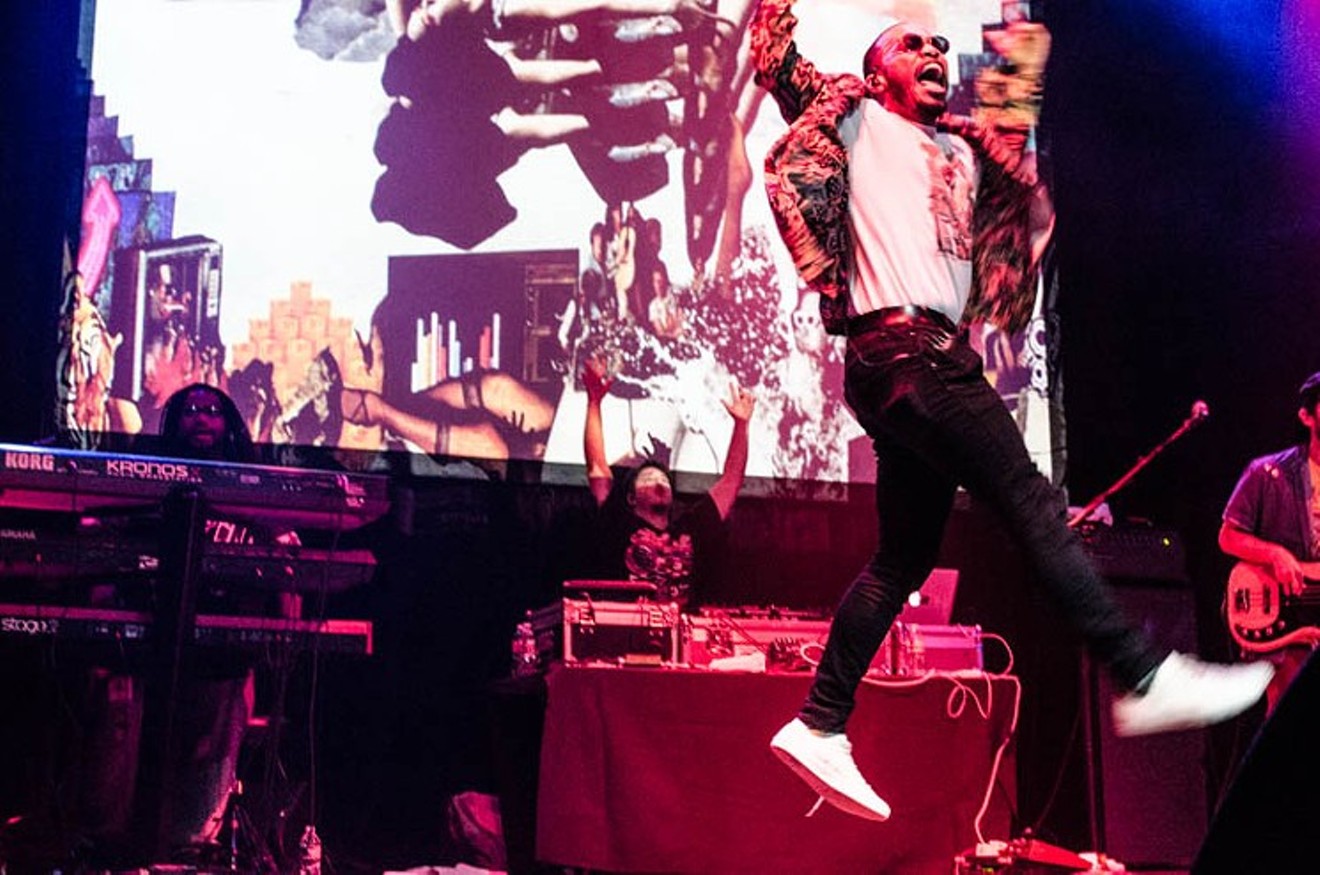 Anderson .Paak at House of Blues in June 2016 Photo by Jody Perry
Can you guys believe it's already June? It seems like just yesterday that we were making New Year's resolutions. (We won't ask how yours are going if you don't ask about ours.) And though the year may be rolling by faster than most of us would like, we can all take solace in the fact that summertime typically brings a slew of solid concerts to town. This week is no different. Keep scrolling to see what's on tap for this week.

Pick of the Week: Juice WRLD
06.06 – Revention Music Center
Jarad Higgins – better known by his stage name Juice WRLD – catapulted into the mainstream last summer with the single “Lucid Dreams,” which features an interpolation of Sting’s 1993 classic “Shape of My Heart.” A vivid story of heartbreak and self-medication, the track received Sting’s stamp of approval after he secured a solid percentage of its rights. Emo and hip hop seemed like an unlikely pairing not too long ago, but Juice WRLD is the next big name on a growing list of inconsolable sad boys with an affinity for the more melodic side of trap music.

The Best of the Rest:
Metalachi
06.07 – Scout Bar
Billed as the world’s first and only heavy metal mariachi band, it would be easy to dismiss Metalachi as a gimmick act. But this Los Angeles quintet is made up of some seriously talented musicians who just happen not to take themselves too seriously. (One of them calls himself Maximilian “Dirty” Sanchez.) With three studio albums to their name – aptly titled Uno, Dos and Tres – Metalachi boasts plenty of material for fans who are looking for classic rock con un poco más sabor.

Flametrick Subs
06.08 – Continental Club
Hailing from Austin, The Flametrick Subs combine rockabilly, garage and surf rock with B-movie appeal. With 30 years of experience and six studio albums to their name, this Texas trio’s live performances are notoriously rowdy, and this week’s stop at the Continental Club should be no different. Fortunately for fans, it isn’t on a weeknight. Because as the Flametrick Subs say: “Feel good now… Feel bad tomorrow.”

Houston Symphony: An Evening With Frank Sinatra & Ella Fitzgerald
06.08 – Cynthia Woods Mitchell Pavilion
For those of you who don't know, Houston has a symphony orchestra. It's a pretty good one too. The Grammy Award winning outfit typically calls Jones Hall home, but it occasionally makes treks to other parts of town too. This weekend, the Houston Symphony will visit the Cynthia Woods Mitchell Pavilion for "An Evening with Frank Sinatra and Ella Fitzgerald," which will see the orchestra celebrate two of the most influential jazz artists of all time under the guidance of conductor Lucas Waldin.

Fonseca
06.09 – House of Blues
Born and raised in Bogotá, Colombia, Juan Fernando Fonseca came to the United States as a teenager to study at the Berklee College of Music. He ended up leaving when he got an opportunity to record his first single, and he hasn't looked back since. Despite his time in the United States, Fonseca boasts plenty of Colombian flavor. And no matter your nationality, the Latin star's unique blend of rock, pop and reggaeton is sure to get your hips and feet moving.

Anderson .Paak
06.11 – Revention Music Center
When Dr. Dre release his third (and supposed final) album, Compton, he introduced the world to Anderson .Paak, who used the good doctor's co-sign as a jumping off point for what has proven to be a very fruitful solo career in just the past four years. Since Compton, .Paak has released three studio albums, all of which have been received critical acclaim. He visits Houston this week on tour in support of Ventura, which debuted last month and is racking up accolade after accolade, so this might be audience members' last chance to see .Paak outside of a sprawling amphitheater.
KEEP THE HOUSTON PRESS FREE... Since we started the Houston Press, it has been defined as the free, independent voice of Houston, and we'd like to keep it that way. With local media under siege, it's more important than ever for us to rally support behind funding our local journalism. You can help by participating in our "I Support" program, allowing us to keep offering readers access to our incisive coverage of local news, food and culture with no paywalls.
Make a one-time donation today for as little as $1.