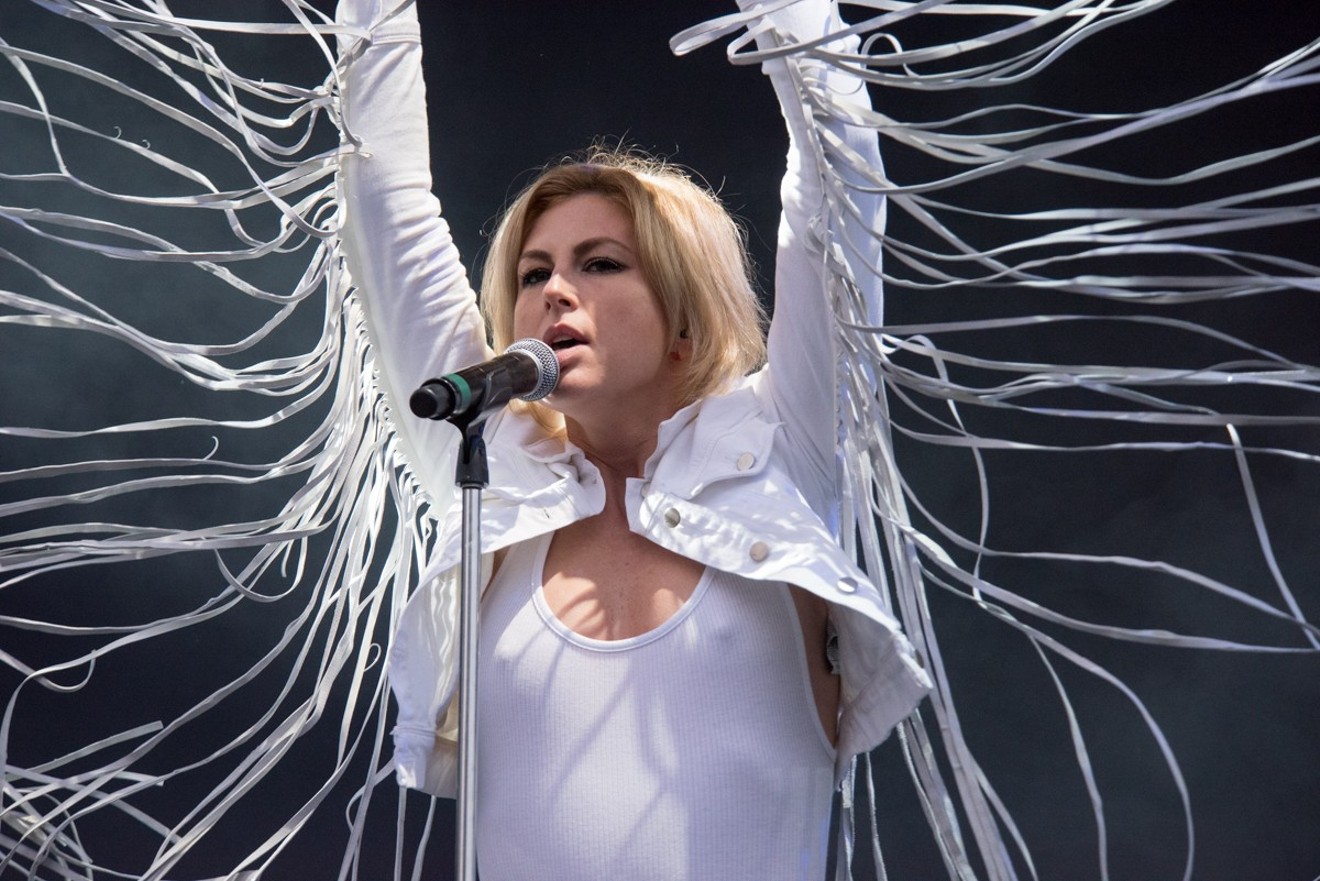 Sarah Barthel of Phantogram performing at Day For Night in 2017 Photo by Jack Gorman
The Texans may not have been able to secure a win over the New Orleans Saints earlier this week, but our readers can at least secure an entertaining evening with the help of this week's concert watch. Keep scrolling to see the five best acts visiting the Bayou City over the next week.

Pick of the Week:
Phantogram
White Oak Music Hall – 09.12
Sarah Barthel and Josh Carter have collaborated with quite a few heavy hitters: Big Boi, A$AP Rocky, Miley Cyrus and The Flaming Lips to name a few. Which could by why, in the past decade, the two artists have only released three records as the dream pop duo Phantogram. But their latest singles "Into Happiness" and "Mister Impossible" hint that new material may finally be on the way. See them at White Oak Music Hall this Thursday.

The Best of the Rest:
The National
White Oak Music Hall – 09.11
Formed in Brooklyn in the early 2000s, The National combine country, Americana and folk to create a unique blend of indie rock. It took nearly two decades, but the group eventually won a Grammy in 2018. On tour in support of their critically-acclaimed eighth studio album, I Am Easy To Find, The National will visit White Oak Music Hall tonight.

Flying Lotus
Warehouse Live – 09.13
Steven Ellison — better known by the moniker Flying Lotus — has put together quite the resume over the past 15 years. Between 2006 and 2014, the Los Angeles-based producer released five records, which range from surreal background noise to progressive, spoken-word rap. On tour in support of his sixth outing, Flamagra, FlyLo will bring his experimental hip hop to Warehouse Live this Friday.

Lenny Kravitz
Smart Financial Centre – 09.15
Retro has always been Lenny Kravitz's shtick. One of his biggest hits was a cover of The Guess Who's "American Woman," which was originally released in 1970. But despite his affinity for a bygone era of music, the New York native hasn't fallen by the wayside. Instead, he has continued to release quality music well into his 50s, amassing plenty of awards along the way. On tour in support of his 11th studio album, Kravitz will visit Smart Financial Center this Sunday.

Senses Fail
White Oak Music Hall – 09.17
From The Depths Of Dreams didn't make much of a splash when it was released in 2002. But two years later, after Let It Enfold You had turned Senses Fail into a household name, fans found themselves clamoring for a copy of the band' first EP, of which only 300 copies were originally released. Nearly two decades later, James Buddy Nielsen - the group's only remaining original member - has re-released Senses Fail's debut and is on tour in support of it. Hear it in it’s entirety at White Oak Music Hall next Tuesday.
KEEP THE HOUSTON PRESS FREE... Since we started the Houston Press, it has been defined as the free, independent voice of Houston, and we'd like to keep it that way. With local media under siege, it's more important than ever for us to rally support behind funding our local journalism. You can help by participating in our "I Support" program, allowing us to keep offering readers access to our incisive coverage of local news, food and culture with no paywalls.
Make a one-time donation today for as little as $1.