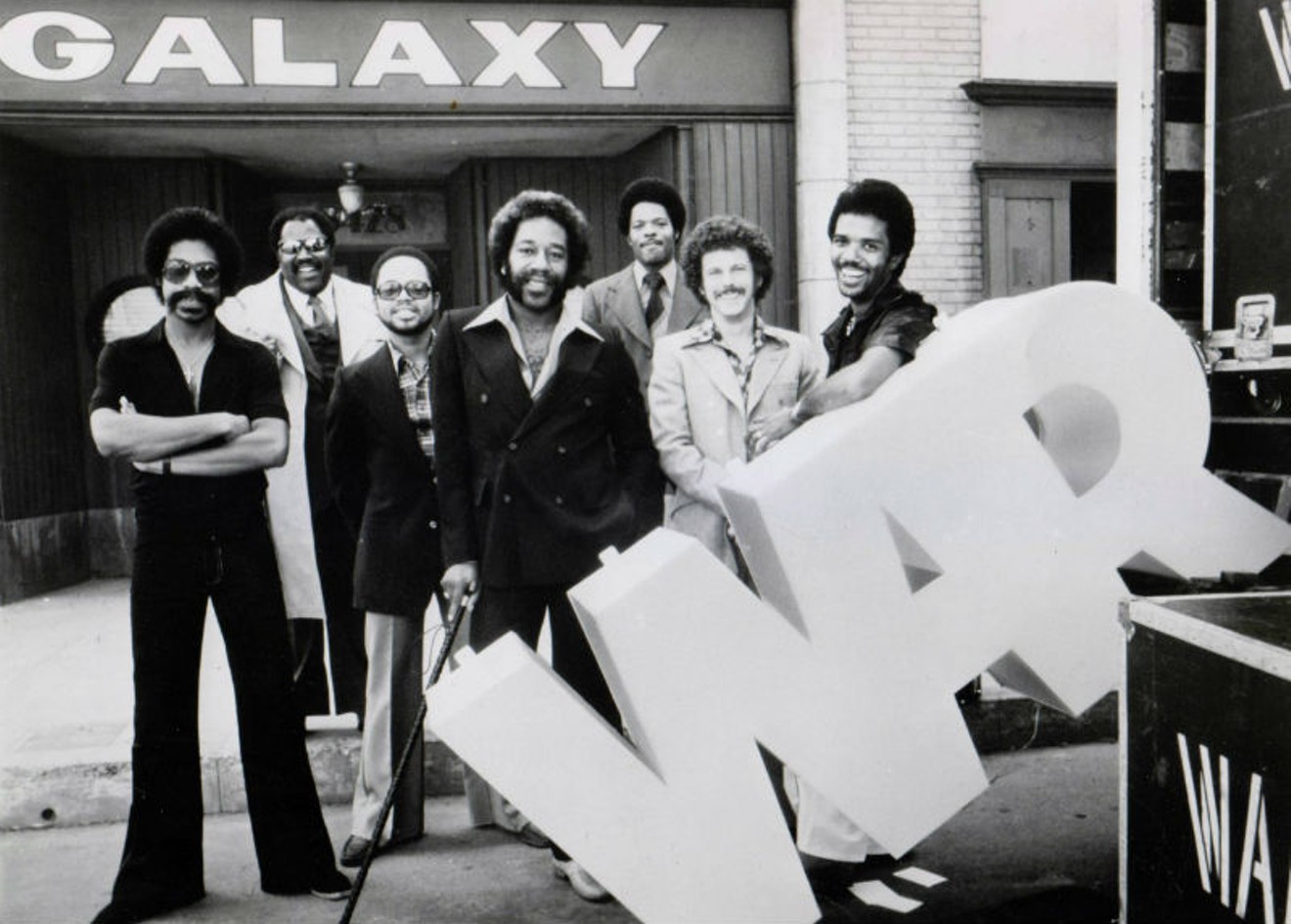 War From the personal collection of Lee Oskar

The classic crossover band War had a surprising system for bringing hits like “The Cisco Kid” and “Low Rider” to life according to Bob Ruggiero. The veteran music journalist and longtime Houston Press writer has authored the first and only biography of the influential rock, funk and soul band.

“The thing that surprised me the most is that the vast majority of the music that came out on the records were extracted and mined from super long jams the band had in the studio, where the tape never stopped rolling,” Ruggiero related. “Even among the band’s principal songwriters, they would rarely come to the studio with a mostly-complete song, so everyone had a chance to contribute. They also made a pact early on to share songwriting credit no matter who did the lion’s share of the music and lyric writing, which is why all seven members, and occasionally (manager/producer) Jerry Goldstein get writing credit.”

This is the sort of insider information Ruggiero is able to offer in Slippin’ Out of Darkness: The Story of WAR. Cactus Music hosts a very special book signing 3 p.m. this Saturday. The author will be joined by original War member Howard Scott for an interview and audience Q&A following Scott’s live performance of some of the band’s greatest hits.

It’ll be a crowning moment for Ruggiero, who has devoted a majority of more than 25 years in journalism writing about music, particularly classic rock. He’s done so for Houston Press since 1997 and shares his knowledge of the subject elsewhere, such as the archival website Rock’s Backpages and his own blog, Classic Rock Bob.

“My two great interests have been music and writing, so it was only natural that they would sort of collide in this way. My first published piece in college in 1988 was at the Daily Texan at the University of Texas at Austin. It was a profile on bluesman John Lee Hooker who was coming to play at Antone’s," Ruggiero recalled. “He did the phone interview with me while standing over the stove in his kitchen cooking beans!”

From then, Ruggiero was hooked. His first Houston Press work was a three-paragraph concert preview piece for a local band called Rosebud.

“I wanted to make such a good impression on the editor that I made sure I saw the band twice before writing a word about them!” Ruggiero said. 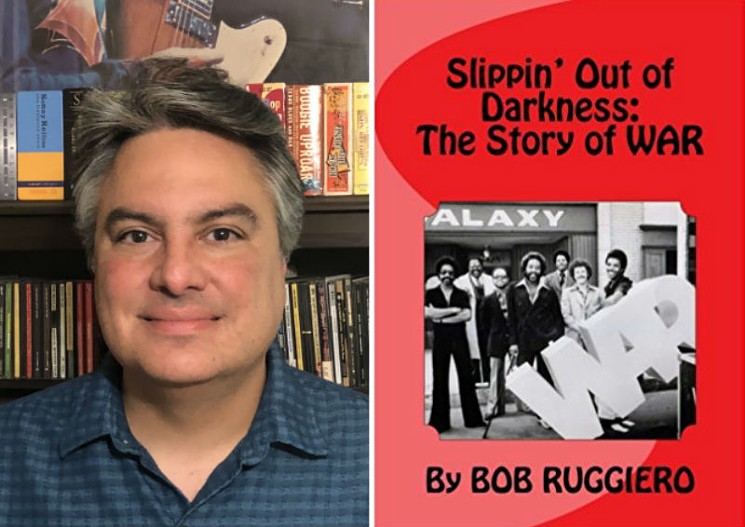 Ruggiero's first book is the first biography of the iconic band, War
Photo by Vincent Ruggiero, courtesy of Bob Ruggiero

He’s interviewed many of rock’s elite and said some “highlights would include getting to interview Willie Nelson in person on his bus during a Fourth of July picnic in Fort Worth near snoozing David Allen Coe, spending an entire Sammy Hagar show at The Woodlands as an onstage ‘extra’ on risers behind the band and having Little Steven bring me backstage himself to meet Bruce Springsteen outside of his dressing room at the Toyota Center. And my brother and I throwing metal horns with Ronnie James Dio backstage!”

If you’ve read Ruggiero’s work, you know he is an avid reader whose reviews of classic rock bios have helped steer readers to (or, in some cases, away) from the bookstore.

“I’ve read hundreds and hundreds of music biographies and memoirs and I could not believe that no one had already written one about this incredibly influential and popular band. I’ve always wanted to write a music bio myself, and I’m a big admirer of War, so I decided that I’d remedy that situation on my own,” he said.

It took Ruggiero just over three years to complete the book, juggling family, full-time work and freelance writing to do so. He pored over books, archived newspaper and magazine pieces, films, even album liner notes for research. But he had access to many of the band’s members – even visiting them at their homes - which built the foundation for his telling of War’s story. As he notes, it’s one filled with thrilling, creative moments, the kind from which sprung iconic songs like “Why Can’t We Be Friends?” “Slippin’ Into Darkness,” “All Day Music,” “The World is a Ghetto” and “Summer.”

It’s also a dramatic tale, thanks to in-fighting between band members and management. As Ruggiero notes in the book, “Unfortunately, the history of War has seen almost as much activity in the courtroom as the recording studio.” Today, Ruggiero says, there are two competing lineups with surviving members playing War music. Lonnie Jordan is the sole original member in the War group as it exists today. Scott, Lee Oskar and Harold Brown tour as the Lowrider Band and “legal issues between the camps and management abound,” according to Ruggiero.


“My three main sources for the book were multiple in-person and phone interviews with three of the four surviving members of the original lineup who could participate — Howard Scott, Lee Oskar and Harold Brown. B.B. Dickerson had a stroke in 2014 and is in a long-term care facility and cannot speak. Charles Miller was murdered in a robbery gone wrong in 1980, and Papa Dee Allen had a brain aneurysm while performing onstage in 1988 and passed away several days later,” Ruggiero said.

“I approached Lonnie Jordan and Eric Burdon multiple times over the years to participate in any way they wanted to, but they both declined. Burdon in essence is responsible for launching the band’s career after taking them on as his backup group for two albums and tours including the hit ‘Spill the Wine’ before he quit and War split off on their own. Former manager and producer Jerry Goldstein – whose company owns the name ‘War’ — also declined.”

Ruggiero wanted as complete a story as possible, so in addition to culling through the private collections of band members like Brown and Oskar (“He saved everything!” Ruggiero noted of the band’s legendary harmonica player) he interviewed people who worked with them, like longtime sound engineer Chris Huston. He spoke with devoted War fans. To include band members who’ve passed away, Ruggiero mined old interviews so their takes could be represented in the book.

“This was a group who weaved so many different types of music in their own music — rock, funk, soul, blues, jazz, R&B and especially Latin/Mexican sounds. That came from the Hispanic culture all around the members who grew up in Compton and Long Beach, California,” Ruggiero shared. “They’re the most Mexican band with no actual Mexicans in the lineup! I mean ‘Low Rider’ and ‘The Cisco Kid’ alone speak volumes. Also, they were racially diverse at a time that wasn’t the norm.”

The band’s legacy is clearly Rock and Roll Hall of Fame stuff, as Ruggiero sees it. They’ve been nominated multiple times but, to date, have been passed over.

Original band member Howard Scott, in the band's heyday and today
From the personal collection of Lee Oskar

“I won’t go into my thoughts on who should and shouldn’t be in the Rock and Roll Hall of Fame because I don't want to start taking blood pressure medication,” Ruggiero joked. “But, I am happy to see that in recent years the Hall has inducted more deserving classic rock bands like Chicago, Yes, the Moody Blues and Journey. War has been on the ballot three times so far but has not made the final cut. I think all of the members, and their fans, would absolutely love to see it happen.”

Ruggiero said he’d like to see more than just that honor bestowed on the band in years to come.

“A Hall of Fame induction, a reunion tour, a documentary or an album featuring new music and guest appearances from acts they’ve influenced, like what Santana did with Supernatural, could go a long way into getting this group and their music the attention they deserve,” he said. “There are also hundreds of hours of recordings of live shows from the ‘60s and ‘70s sitting in a vault somewhere, and I’d love to see a live box set.

“If they did get in the Hall of Fame, I think everyone would show and even play together. I don’t think the in-fighting has kept them out at all – there are plenty of others acts in who had, or have, worse blood between them.”

Who might induct them if that honor came to fruition?

“I know they’ve been sampled by a lot of rappers, and Snoop Dogg has gone on record as saying ‘Without War, there wouldn't be no Snoop Dogg.’ As a kid, the Long Beach-raised Snoop Dogg used to ride his bicycle around where War rehearsed and listen to them!”

That’s just another snippet of info War fans might glean from the book. It’s available on Amazon and, of course, there will be ample copies on hand at this Saturday’s event.

“I am honored that Howard Scott thought enough of me and the book to come down at his own time and expense to do a mini-concert for the event,” said Ruggiero, adding that Scott will be joined by local Houston musicians including versatile vocalist Tweed Smith, who was a member of War on albums in the late ‘70s and early ‘80s. Rapper Joe Mayberry, with whom Scott recently released a three-song EP, will also perform.

“It will be a rare opportunity for fans to hear a bunch of classic War hits by the original guy who co-wrote, sang and played guitar on them,” Ruggiero said.

Bob Ruggiero signs Slippin' Out of Darkness: The Story of WAR, his unauthorized bio of the seminal band, 3 p.m. Saturday August 25 at Cactus Music, 2110 Portsmouth.  The event will include a live in-store performance of classic War tunes featuring original band member Howard Scott.