Irresistible Rock: Igor And The Red Elvises Return To Houston 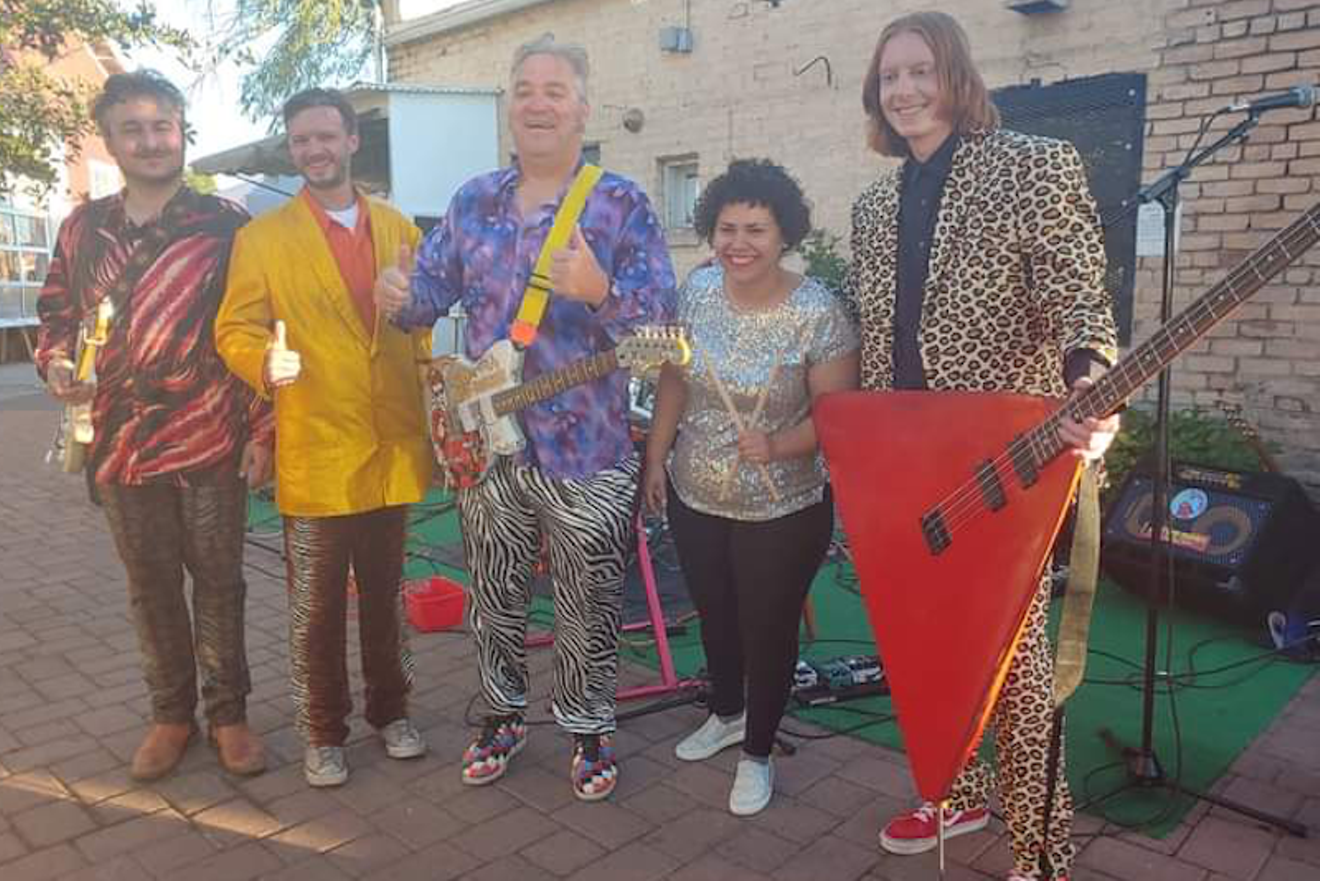 Igor And The Red Elvises will perform at The Continental Club on Monday, July 19. Photo By James Applewhite Gilchrist
Sometimes a dream is nothing more than a hazy memory that can be shaken off as the day begins and other times, it can feel like a bolt of lightning charged with a message for the subconscious.

For Igor Yuzov of Igor And The Red Elvises many years ago, it was the latter. Yuzov, born in Germany and raised in Ukraine, was thinking about changing directions and starting a new band when Elvis appeared to him in a dream and suggested he call his project The Red Elvises.

“If Elvis tells me to do that, who am I to argue with the king?” he asks from the road. Igor And The Red Elvises have been returning to stages and don’t plan to slow down anytime soon. The band is making a stop in Houston on Monday, July 19 at The Continental Club.

“It’s pretty crazy, six months, almost every night there's a show. We are really excited to be touring again after a year of sitting at home, watching TV and getting wasted. It’s just great to be playing for the people and seeing them dancing and enjoying life. When you stop touring, you don't realize how much it means for people to get together and enjoy life together instead of hiding in their own apartments.”

Getting people together and creating a party has long been the biggest side effect of watching Yuzov and his band beginning in the ‘90s with his folk band, Limpopo, that used to perform on Venice Beach sidewalks where they would gather large audience. This, in turn, led to performing on Star Search with Ed McMahon and recording an album.

Prior to drawing crowds on the street, Limpopo was performing to large crowds in Russia, where when the Soviet Union dissolved and rock and roll was no longer illegal, they used folk as a means to stand out among other bands.

“It was our kind of rebellion,” describes Yuzov. “We started playing folk because everybody was playing rock because it was allowed so it wasn't that exciting anymore.”

In his youth, Yuzov and his peers had gone to great lengths to get their hands on the rock and roll music of the time. “It was like selling drugs these days,” he says of the Sunday morning record trades that would take part in the parks between the trees so the cops couldn't drive in to bust anyone. “In Soviet Union you could get into trouble for playing rock and roll.”

“You couldn't buy good records at all in stores or anything like that. It was impossible, they didn't even sell them,” he says, describing how he mainly came across European rock acts like the Rolling Stones, Pink Floyd and The Beatles but every now and then getting some American bands like Grand Funk Railroad and Crosby Stills And Nash.

Though Yuzov and his band had veered away from the formerly banned rock and roll sounds that they enjoyed, Yuzov knew he was being drawn again.

“I enjoyed playing folk but it wasn't my passion. I always loved rock and roll. When I started listening to it, I couldn't understand English at all. It was like blah, blah, blah but I think instincts or whatever is in how you react to the rhythm. It still drives me crazy and I've been touring for 40 years and I still love it.”

"It still drives me crazy and I've been touring for 40 years and I still love it.”

The phenomenon of how music can cross language, borders and cultures to hit listeners right in the heart and rattle their bones is evident in Igor and his band, who are all from different countries ranging from Brazil, Israel, United States and Russia.

“It’s not your choice, it's something that you cannot resist,” he says of the music bug.

His love for rock and roll is not the only thing that has stayed the same. Yuzov's and his band's penchant for mixing humor in with their performances including wardrobes as loud as their instruments and comical lyrics with serious riffs have stayed par for the course.

Yuzov has also maintained space on the tour van for the enormous show stopper, the balalaika. “At a certain moment I just didn't want to carry it because it took so much room in the van but then people were bugging us so much that I even ordered a new version of it we started carrying.”

When describing his new lineup in the band and removal of their horn section, Yuzov lightheartedly quotes Dire Straits saying "Now we are guitar band. No trumpets, it ain't what they call rock and roll."

Asked if all his years in California have pushed further into the surf rock sounds they're so associated with Yuzov says, "Definitely. I always liked jogging, swimming or hanging out on the beach and surf music is such a reflection of that lifestyle. Surf music definitely reflects the movement of the ocean."

Their explosive on stage presence has continued to push them into venues across the United States and Russia as well as appearances on TV and films. In 2014 there was even a book written about Yuzov and his life.

“We are definitely not mainstream but our fans are really, really supportive so it's great to see so many familiar faces coming and helping the band. It’s a good party time at the show. It’s kind of like when I was in college I liked to party and it’s like I made it my profession.”

Igor And The Red Elvises will perform on Monday, July 19 at The Continental Club 700 Main, 8 p.m., $20
KEEP THE HOUSTON PRESS FREE... Since we started the Houston Press, it has been defined as the free, independent voice of Houston, and we'd like to keep it that way. With local media under siege, it's more important than ever for us to rally support behind funding our local journalism. You can help by participating in our "I Support" program, allowing us to keep offering readers access to our incisive coverage of local news, food and culture with no paywalls.
Make a one-time donation today for as little as $1.