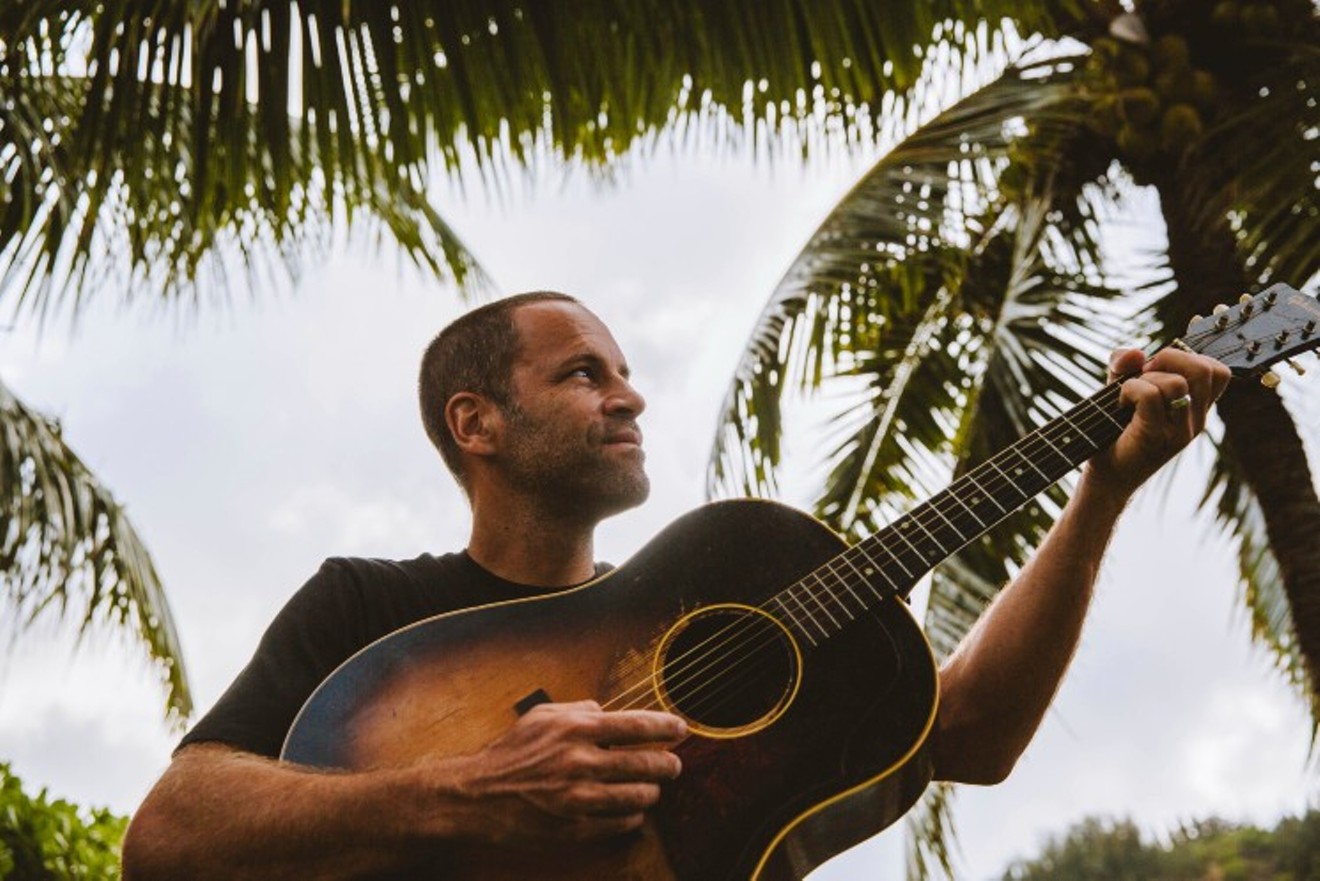 Jack Johnson Photo by Kizzy O'Neal, courtesy of Big and Bright PR
Jack Johnson knows he’s often seen as music’s “mellow guy.” After all, that’s the vibe from songs about viewing heavenly constellations or making pancakes on a rainy day. But, the multi-platinum singer-songwriter’s got lots of other songs, including some new ones which he’ll be performing for Houston fans at Cynthia Woods Mitchell Pavilion this Friday, and if you listen closely enough, you can hear Johnson calling for action in them. Like another popular band touring this summer, many of Johnson’s songs urge listeners to rage against the machines that are wreaking ecological and societal havoc.

It’s nothing new. Johnson was asking “Where’d all the good people go?” on record nearly 20 years ago. But his last two LPs, 2018’s  All the Light Above it Too and Meet the Moonlight, released this June, feel more urgent. The songs sound like protest music, we tell him by phone in a recent chat, music meant to evoke some action, akin to Rage Against the Machine, albeit less thunderous.

“I definitely don’t always get that from people who don’t dig in. It’s understandably so. If somebody showed you a couple of my love songs, they always start just by me joking around the house trying to make my wife laugh and then they’re catchy enough that friends always tell me that those are the ones they want to hear and I put them on the records,” he said.

“If you listen to the whole album, you know, there are things questioning social norms or questioning where we’re at as a society. Basically, social commentary,” he continued. “Rage Against the Machine was a huge influence. I mean, most people would never think that, but I wore that first album out. I was learning to play guitar and basically like a teenager when that first album came out, so I was just rocking it, learning how to play all those riffs and loving the lyrics.

“Sometimes when the chord changes and the music is softer and it’s not hitting you in the same way that those songs do, it’s maybe a little more difficult to identify it, but they are, they can be protest songs in their own way.”

The first line from the first track of the new album goes “Why is it so hard to find an open mind?” The last line of the second song from Meet the Moonlight, the eighth studio LP from the Grammy-nominated artist, is “Is there anybody out there even listening?” They’re both good questions, particularly from an artist who really is trying to change the world for the better, through art and through action. We asked Johnson, now middle-aged and two decades removed from his debut record Brushfire Fairytales, if he’s feeling less encouraged by people at this stage in his life and career.


“I think if anything I’m still an optimist at heart, but I think you also get to a point where you’ve had enough experience to be a realist, too,” he shared. “I think I’m more optimistic in certain ways but maybe that optimism is based on trying your best to do things, especially in your own community.”

Johnson has tried to lead by example. In 2008, he and his wife, Kim, created the Johnson Ohana Foundation, a non-profit charity to promote positive change in communities by way of environmental, art and music education. They started All At Once, a social action network which connects volunteers and non-profits. More recently, the Johnsons co-founded the Kokua Learning Farm in Hawaii, where they reside.

“We’ve been working on this learning farm for kids and that brings me so much joy. I’m down there when I’m home quite a bit and especially this one little area where we’re re-establishing native wetland plants, and then to see the birds start coming back, the native birds – birds of all kinds – but especially to see these kind of rare native birds coming back and native insects.

“Even though there’s a lot of things we could be down about as far as the future and the outlook with climate and whatnot, you can still find these really bright things. You just have to kind of narrow down and draw a circle and work real hard in that area and find the brightness in there. So I still have optimism, you know?”

Johnson has famously taken his ecological initiatives off the island and on the road, too. He’s at the forefront of “tour greening,” the emerging practice of making tour more eco-friendly. Fans at this week’s Woodlands show will be able to roam a “Village Green” area to learn more and commit to initiatives like recycling, composting, reducing carbon footprints and the like.

“There’s definitely a couple of standout venues that I have to admit we learn from when we go there because they’re progressive when it comes to trying to cut out the single-use plastic, that’s a big one,” Johnson said. “We try reusable pint cup programs wherever we can, rather than see a sea of plastic bottles out on a field somewhere afterwards, which always breaks my heart because I grew up in Hawaii and I see where all the plastic ends up. A lot of it’s on the beaches, on the windward sides of the island, there’s a lot of plastic ending up there.

Johnson is active in eco-initiatives at home in Hawaii and on the road
Photo by Morgan Maassen, courtesy of Big and Bright PR
“It’s something I’m pretty serious about, trying to eliminate the single-use plastic at the shows,” he continued. “To be honest, a lot of the venues around the world have become pretty receptive to it, I think partly because it’s what fans are starting to want to see."

That’s one part of tour greening but Johnson said the tour trucks that haul the show from one city to the next run on eco-friendlier biodiesel. There’s also a focus on supporting local farmers from town to town, as much as they can in the front of the house for fans and “100 percent backstage where we have more control over it, we try to support those local food systems,” he said. “Being a big supporter of Farm Aid, we’ve learned a lot about local food systems from Neil Young and Willie Nelson and all the people who help put on those great Farm Aid shows. It’s something we try to bring to what we do.”

Johnson knows most of the audience will be on hand for the music if not these initiatives. When he was here in 2018, there was a marriage proposal before the set that Johnson’s wife Kim witnessed and Jack addressed onstage. It was the literal ideation of his music, which above all advocates for human connection, between two people and larger groups. Everything, to borrow a line, is better when we're together.

“The one thing I can always offer, from the very first time I played, in open mic nights even, or just the small club where a few friends are showing up, I always was just as present as I could be in that moment, never thinking about trying to get to the next place. Just having as much fun as we can that night. It’s something the band and I talk about a lot. I’m really lucky to play music with the same guys for the past 20-plus years, we’re all just great friends.

“You know Merlo (Podlewski) plays bass, he always had a good way to put it. Sometimes musicians can get a little full of themselves. He’s like really we’re in the service industry. People, they’ve saved up, they come to the shows, it’s a chance to get out for the weekend and just have a good time. We’re just part of the service industry, we’re there to put on a good time and make people feel great. So that’s what we try to do, is just put on a good time and be as present as possible.”

Because Johnson is a thoughtful human and artist, we recognized some of our questions were a little serious. We switched gears and traded notes on music in the Johnson household, what he and Kim and their three children enjoy.

Jack Johnson: maybe not a mellow fellow
Photo by Morgan Maassen, courtesy of Big and Bright PR
“We all love Khruangbin quite a bit,” he said, which thrilled us since they’re fellow Houstonians and also favorites of ours. “That’s a band we listen to, they’re coming to Hawaii pretty soon so we’re hoping to see them. And then Dr. Dog is a band we put on a lot, Wilco we put on around the house a lot, Feist is a big one. Besides like Beatles – we’re a Beatle-y family, we’ve gone through all those on the road trips – Bob Marley gets played a lot around the house, too.”

Johnson’s music gets played around the house all over the globe. As it's evolved, it’s told us more about his knowledge on the world and his place in it. He's passionate about it, we suggest.

“I’ll tell you one thing and all my friends really laugh at this,” he shared. “I’ve kind of become labeled as ‘the mellow guy.’ All my friends, they think I’m hyper-competitive because it’s true. A lot of my friends that I grew up with around here, whether it’s ping-pong or sometimes we’ll play some bocce ball or horseshoes, cards – whatever we’re playing, I love winning when it’s with my friends.

“If you could meet my friends, they’re way mellower than I am,” he insisted. “They always joke, ‘Oh, the mellow guy!’ because that’s sort of this persona that I’ve gotten. I guess it’s from the music and whatnot, you know, it’s pretty mellow music, but I’m pretty competitive. My friends would tell you otherwise if you tried to call me a mellow guy.”

Jack Johnson, Friday, August 26 at Cynthia Woods Mitchell Pavilion, 2005 Lake Robbins Drive, The Woodlands. With Ziggy Marley. Doors at 6 p.m. for this all-ages event. $41.50 and up.
KEEP THE HOUSTON PRESS FREE... Since we started the Houston Press, it has been defined as the free, independent voice of Houston, and we'd like to keep it that way. With local media under siege, it's more important than ever for us to rally support behind funding our local journalism. You can help by participating in our "I Support" program, allowing us to keep offering readers access to our incisive coverage of local news, food and culture with no paywalls.
Make a one-time donation today for as little as $1.