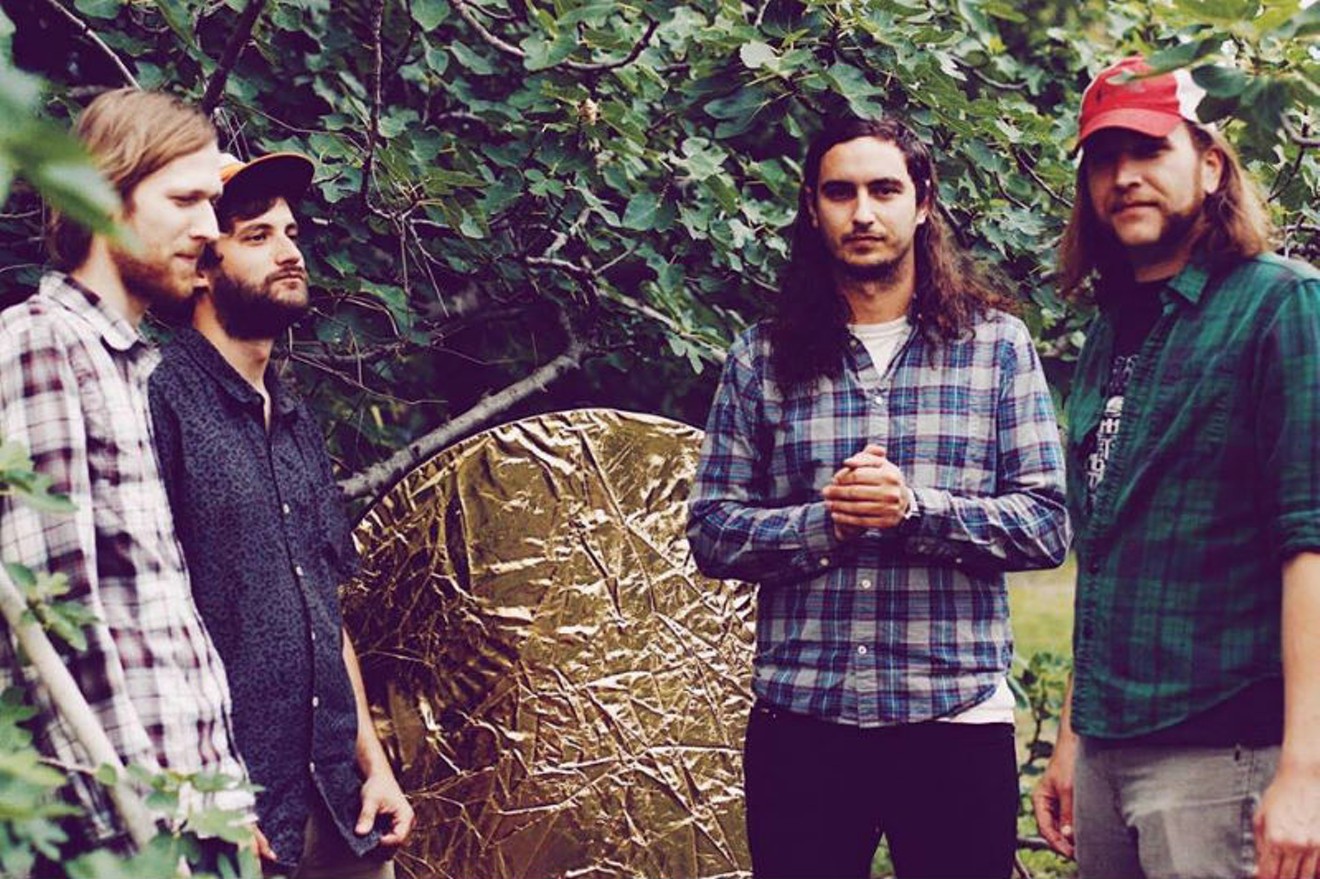 It’s not cockiness or arrogance, but there’s a certain swagger about Jody Seabody and the Whirls. Many bands would be fraught with nervous excitement the week of an album release, but these Houston music veterans possess a confidence that is allowing them to fully enjoy the moment. The new album, Hawksamillion, bows this Friday and its creators have gone about the business of bringing it to the masses with a savvy seen in only the most seasoned of musicians.

Take the album release show, for example. White Oak Music Hall hosts the event tonight and the band has no worries about how it will go off, since it’s drawn together a talented, exciting and proven bill.

Bryce Levi Perkins, the band’s guitarist and vocalist, said “Darwin’s Finches, Jon Black and Jealous Creatures will be joining us and we're extremely grateful that they agreed to be on. As far as themes go,..."

“There is sort of a running theme with how we filled out the bill in that they’re all bands that we’ve been playing with from the beginning more or less, so we’ve been keeping the feel of this release as a ‘day-one’ feeling overall,” added Clint Rater, the band’s drummer and vocalist. “I mean, we’ve been playing with Jon Black and Darwin’s Finches for at least a decade now and Jealous Creatures not too far off. It’s not just an album release, it’s a way of saying look how far we’ve all come over the years.”

In the fickle music industry, that’s a nice notion to celebrate. Perkins and Rater are the founding members of the band, affectionately known simply as “Jody” by fans and followers. Perkins said they started making music together as freshmen in high school in 2004, but it became a more professional endeavor once guitarist/vocalist Dave Merriett joined in 2008. Bassist Stu Cooper joined the group two years ago.

That solid core has allowed the band to take a workmanlike approach to new milestones like Hawksamillion. 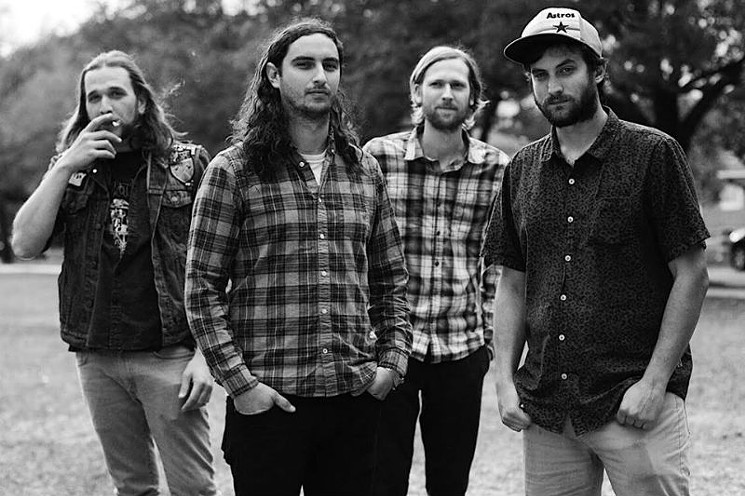 The band's new album, Hawksamillion, drops this Friday
Photo by Alyssa Dupree, courtesy of Jody Seabody and the Whirls

“We set about six months’ time of practice to just get all of the songs from the album down to a T before we began production of the album and then after that we went in to Cavernous Sounds Studios run by Brandon Black from Cavernous — one of our favorite Houston bands that no longer plays, much to our dismay — and tracked all the drums in a day,” Perkins explained. “After that, I went and recorded all the other parts at the Jam Space and mixed them down and mastered it myself.”

“The music wasn’t originally written for Jody Seabody,” added Merriett, “it was originally supposed to be a three-piece side project that had a more stripped-down sound, so one of the hurdles was just adjusting the songs for more instruments and the Jody style in general.”

That, the band notes, was the only real obstacle to the process.

“There weren’t very many highs or lows really, it all just kind of went as we planned it,” Perkins confirms. “This was a new way to make a record for us because we had kind of set a schedule for ourselves to get certain things done by certain times and when you’re doing that, as long as you stay on schedule, you feel like you’re doing good work. I’m just proud of us for being able to create something that way because usually it’s quite the opposite. I guess we just held each other accountable for staying on track and not letting things slip through the cracks, and letting things slide and what-not. It was very healthy but also uncharted waters at the same time, which can be unnerving."

“It is easier for us to do records because we have a kind of understanding for how things go when it comes to recording a record by this point,” Rater summarized.

All agree there’s no real theme to Hawksamillion, but the album’s tracks may have a loose affiliation, Rater says.

“I don’t think anything was really pre-meditated as far as an overall theme is concerned, but looking back on it lyrically there seems to be a theme of being at war with yourself and the constant battle between internal and external stimuli and overcoming that and getting through that and coming out of it, not untouched, but surviving it,” he said.

A band that can still be performing after 15 years — and arguably at its best — knows a thing or two about surviving. We ask how the Houston music landscape has changed and whether they believe they have had some influence on it over the years.

“There’s definitely been a lot more emphasis on national attention, like the festivals and what-not, but it also leaves more room for there to be focus on the middle and local scene as well,” Merriett said.

“The scene in Houston has certainly grown, just like the city itself; so, just like the city itself, it’s become more inclusive because there’s more to go around so as long as you can carve out your little niche and somehow remain — because in Houston you gotta keep it real, so if you can do that while still staying afloat in this gigantic scene that goes all the way from Acadia up north to Rudyard’s in the 'Trose, you’ll earn that much more respect because there’s that much more to go around,” Rater added.

Perkins says, “I feel it’s become slightly more incorporated as far as the festivals gaining national attention and all that but it's definitely maintained more credibility than some other scenes in Texas and throughout the country because a band from Houston can still put on a big show here and run it all and do it all ourselves with just Houston talent and Houston promoters without national recognition and all the fuss. There’s still plenty of love for just Houston within the scene.”

"Jody" is a blend of psych-pop-punk rock that is thrilling to witness live
Photo by Alyssa Dupree, courtesy of Jody Seabody and the Whirls

One thing about the songs from the new album is that they’ll assuredly translate well in the live act, which is Jody Seabody’s calling card. Over the many years of performing, the band has earned a reputation for energetic- to-the-point-of-manic stage shows. It’s the kind of show local music fans should want to tour other cities, so those locales can see Houston at its live show best. Tonight’s set at White Oak is the kickoff to a two-week tour for Jody, into the Midwest as far as Nebraska and back down through Texas.

What will audiences in other cities learn about the band’s impact on Houston music?

“I would like to think that we are influential because we do whatever we want whenever we want musically and if I see anyone doing that in any field I’m going to be inspired by that,” Rater says. “I think when it comes to, not necessarily the amount of content, but the quality and diversity of the content, we're in front of the pack. Does it matter to us at all for us to be influential? No, it doesn’t, but I would hope that we are influencing people because we are heavily influenced by the people and the bands around us; so, if we weren’t influential, we'd obviously be doing something wrong.

“Artistic influence and influencing something are different things so it’s not our goal to be artistically influential to other people but anytime we're playing a show in Houston where people are having a good time it’s hard not to think ten years down the road when new bands are coming up that you were one of the bands that kind of helped perpetuate those good times from ten years before,” Merriett adds.

Perkins considers the question and returns an answer that’s wild, confident and Houston-centric. In other words, perfectly Jody.

“I'm not sure about influencing Houston music,” he says, “but when Elvis, Bob Marley, Kurt Cobain, Chubby Checker and Pat Sajak all recently said on separate occasions that Jody was their favorite band ever, I was blown away. As far as making a mark in Houston music in 2018, I'd just hope that people enjoy the album and swang and bang with it on full blast out the slab with H's up.”

Jody Seabody and the Whirls celebrates the release of Hawksamillion, the band’s new album, 8 p.m. Friday, August 17 at White Oak Music Hall, 2915 North Main. With Darwin’s Finches, Jon Black and Jealous Creatures. All ages, $5, free for 21 and up.