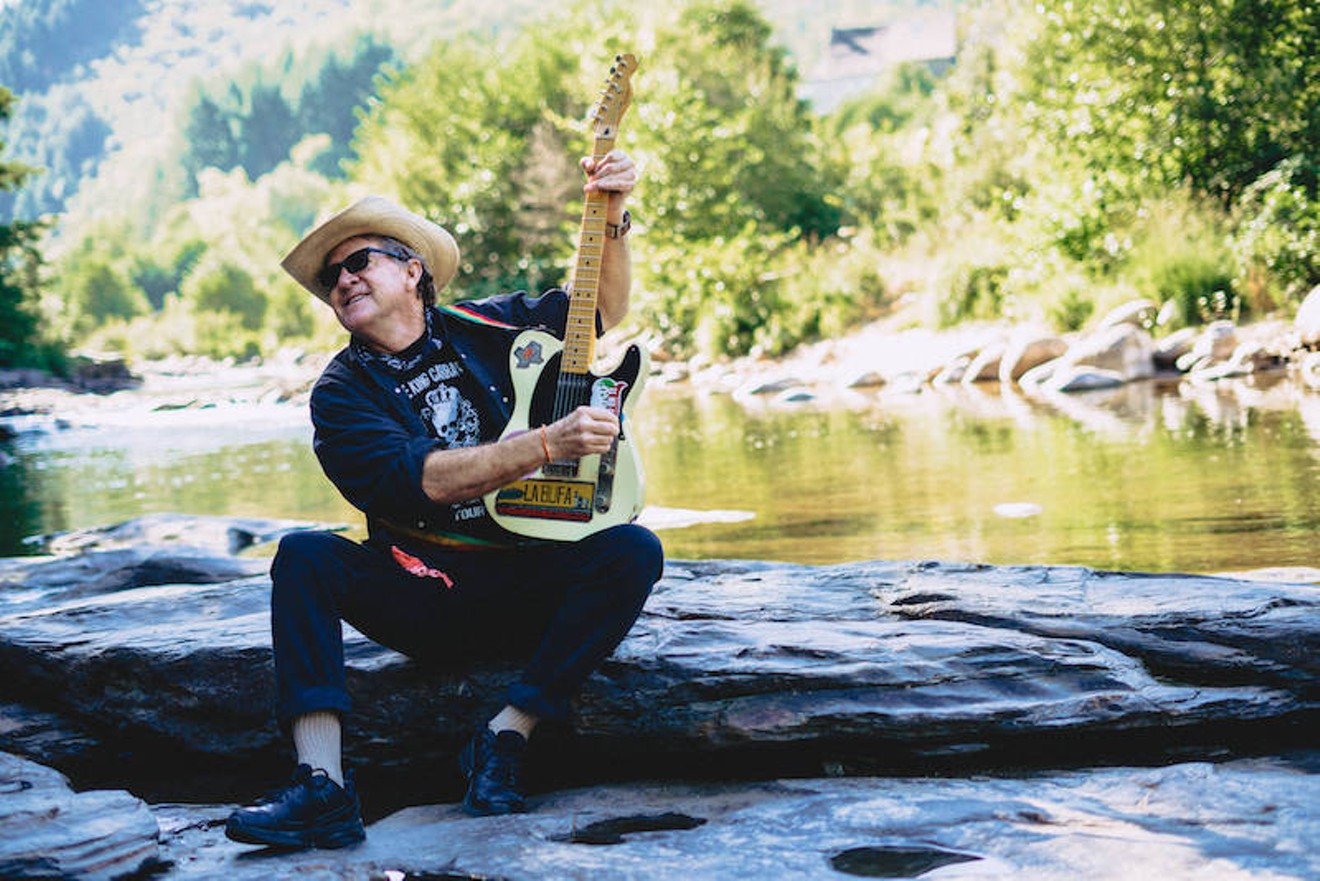 Joe King Carrasco, the king of Tex Mex rock and roll, will perform at The Continental Club on Friday, June 17. Photo by Felix Barjou
Whether he is traveling down a virtual rabbit hole of music or physically moving across the globe to play exotic shows in Cambodia, the Amazon or the Galapagos, Joe King Carrasco seems to have been born to wander in search of new sounds and sandy beaches while bringing his own Tex-Mex rock and roll flavor to the mix.

“If people are ever bored of music, just go check out another country’s music and start investigating,” says Carrasco. Joe King Carrasco and his band will end their recent tour with a special performance at The Continental Club on Friday, June 17 before he heads back home to Mexico and then on to Europe.

“This band sounds really good right now,” he says of his four piece group. “We finally got really tight after a month and half of playing.”

Carrasco and his Texas band recently performed at his 50 year high school reunion in Dumas, Texas. “I guess at this point I try to play these weird crazy exotic places but then you get to come back to Texas and see all your friends and have fun.”

Growing up in Dumas, despite their German heritage, Carrasco and his brothers were drawn to Mexico with its beautiful beaches, laid back energy, rich culture and of course, the music.

“Dumas is kind of like out of The Last Picture Show,” says Carrasco who during his high school years relocated to San Francisco. “It was like a really strange turn but you know you gotta appreciate where you come from and there's a certain sound out there,” he says of his hometown and nearby Clovis, New Mexico where Buddy Holly and others recorded. “I sort of call it the Clovis sound,” he says.

He started Joe King Carrasco and El Molino with the legendary Texas musician Augie Meyers who helped create the Tex-Mex rock and roll sound with Doug Sahm and the Sir Douglas Quintet.

“In my lifetime Doug was the best musician I've ever witnessed overall. I’ve never seen a better musician in my life. Doug could take any cover and turn it into his own, he could play anything,” he says, recounting how Sahm and his band mates managed to make even Paul Anka’s seemingly square “Diana” into something funky.

"In order to survive Texas, Houston and San Antonio you gotta have a lot of soul and be able to handle the heat.”

In the later ‘70s, Carrasco started Joe King Carrasco and the Crowns, the band that took his wild sound to larger audiences and cemented his place as the king of Tex-Mex rock and roll and pioneer of the new wave movement.

Carrasco took his love for Latin American culture to Nicaragua for a while where he studied not only the language but the Sandinista philosophy and approach to governing, ideals that the original party in recent years has completely turned their backs on as they have morphed into yet another set of greedy dictators.

“We did a song called “Banana” during the Sandinista war and the Contra war. That song was pretty popular and it reflects that we can all hate each other but we can all agree that we like bananas. As bad as it gets, we can all still like bananas.”
During the early years of MTV, when the channel used to actually feature musicians, Carrasco’s wild blend of world sounds and new wave entered living rooms all over the world with his hit song “Party Weekend” which MTV re-released as “It’s A Party Christmas.”

In 2006, Carrasco relocated to Puerto Vallarta where he owns Nacho Daddy, a restaurant and nightclub and has a studio to record his songs when he’s not on the road.

“I drove between Laredo and Jalisco a lot by myself and I was sort of like a front seat witness to the drug war. It was pretty intense but you write the songs while you're driving so most of my themes probably happened between Laredo and Vallarta.”

He also founded Viva Perros, a non profit dedicated to finding homes and providing healthcare, including spaying and neutering, for dogs in Mexico and other Central American countries to help control the rampant issue of street dogs.

“My dogs got me through a lot of hard times and they teach us stuff. My favorite time in my life is going down the road in Mexico with my three dogs. It’s the happiest I've ever been and I’m just trying to pay back all the love they gave to me.”
In 2020, Carrasco y Colectivo Chihuahua released Mariachi Blues featuring Patricia Vonne on the sexy rock and roll track “Lil Lobo” showing off the duo’s chemistry. The two have continued writing together on not yet released tracks.
Just one year later Carrasco released Beers Bars & Guitars highlighting his Texas roots with heavy blues fused with his beloved, tried and true Latin percussions. He continues to release videos for both albums including the recent “Dallas” filmed during quarantine in Mexico.

“I go through different phases,” admits Carrasco. “The last two albums were bluesy. I think the next one is going to be more Tex-Mex or maybe Joan Jett rock and roll, I’m not sure. I go through phases, there's no rules you know.”

There are no rules indeed for Carrasco who splits his time between Mexico, Texas and France when he is not on the road. No matter where he is or who his backing band is, Carrasco comes to rock using the music as a fountain or youth of sorts.

“Rock and roll just keeps you going,” he says. “It's a groove. Everybody knows “Wooly Bully” and as long as you've got a cool band and it's grooving then the energy works. Each time you play you come out there, do your thing and try to do the best you can do to make sure people get off. Just keep on trucking, keep grooving and prepare for the next gig.”

Joe King Carrasco will perform on Friday, June 17 at The Continental Club, 3700 Main. 9 p.m, $15-25.
KEEP THE HOUSTON PRESS FREE... Since we started the Houston Press, it has been defined as the free, independent voice of Houston, and we'd like to keep it that way. With local media under siege, it's more important than ever for us to rally support behind funding our local journalism. You can help by participating in our "I Support" program, allowing us to keep offering readers access to our incisive coverage of local news, food and culture with no paywalls.
Make a one-time donation today for as little as $1.