Not Dead Yet: Jon Dee Graham Comes Back Swinging 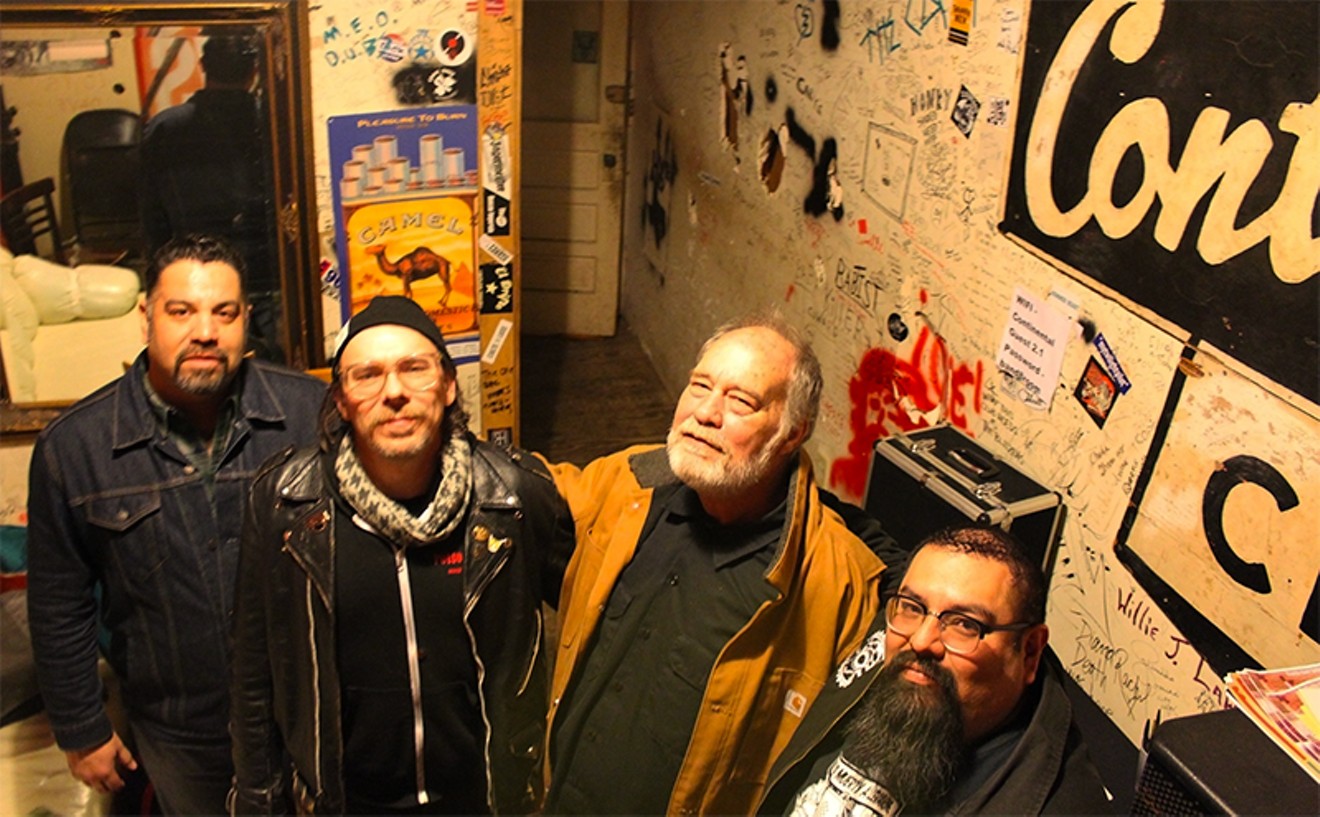 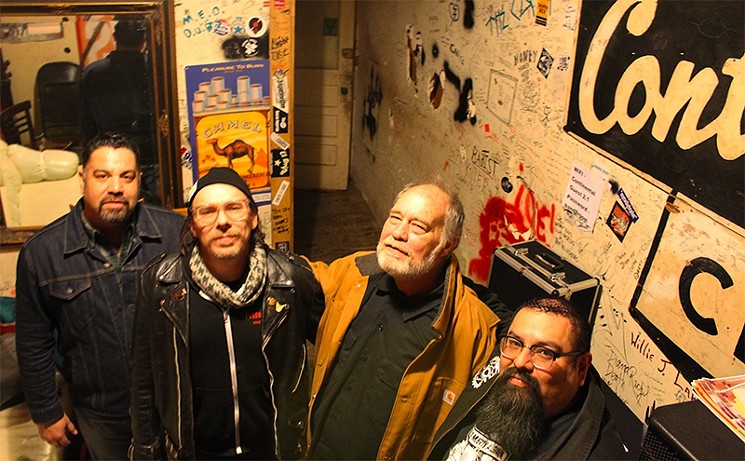 Jon Dee Graham and Los Gallos Luchadores will perform Thursday, March 5 at the Continental Club.
Photo By Gladys Fuentes
Don’t worry, Jon Dee Graham was only dead for a little while. The beloved Austin artist had a close call this past summer but he’s back on his feet and playing the guitar with more energy than before and a band of Houston artists lighting a fire deep from deep inside the well lived artist.

Graham has of late been playing a monthly show in Houston on the first Thursday of every month at the Continental Club.  Though he will not be coming to town this month, he will be back on Friday, April 10 with his Austin backing band, The Fighting Cocks.

Graham is a grizzly fella and his voice drips with the depth of life. He is known and loved for his undeniable talent as a songwriter, easily bringing listeners into his stories, which cover every emotion on the spectrum of feelings. He always takes the stage like a caged tiger, regardless of who is backing him, pacing back and forth while bending notes on his electric guitar.

Graham was raised in the border town of Quemado, Texas but relocated to Austin to attend the University of Texas. He got his start as a young man playing in The Skunks, one of Austin’s first punk rock bands to break out nationally and then with the Escovedo brothers in the True Believers.

Graham has gone on to record ten solo albums receiving critical acclaim for his rich songwriting and ability to burn the house down on the guitar. He has been honored three times in the Austin Music Hall of fame for his work in his previous bands and his solo work.  He has maintained his weekly gig at the Austin Continental Club for over twenty years and frequently tours around the country.

This past summer while on tour in Chicago with The Fighting Cocks, Graham suffered an electrical storm stopping his heart. “I was 12 shows into a 17 show tour, no nights off. We played this festival indoors so I was sweating my ass off, I was dehydrated, I was really tired, I played almost two hours without stopping and I left the stage,” describes Graham.

He decided to sit in the tour van with the A/C running in an attempt to cool off but when he came to he was in the hospital. An officer on duty saw him slumped over the steering wheel of the van and opened the door, quickly realizing Graham needed help.

“I was dead for five to seven minutes. They said eight and a half minutes is when brain damage starts so I was right on the cusp, maybe I had a little, I don't know,” he laughs adding, “I’m happy about it, my life seems easier now.”

Graham got back on his feet rather quickly, returning to his regularly scheduled program of playing shows and working on his new album, now titled Only Dead For A Little While. He began his new gig in Houston in August, still using a cane and getting back to where he was before the storm.

Graham initially traveled to Houston with his long time Austin based backing band, The Fighting Cocks and despite having to sit for his shows and use a cane to get around, he was always on fire on stage, playing with the kind of determination that may only come having cheated death.

For his October show, his usual band couldn’t make the trip with him and he sent a text to a friend asking for recommendations for local players. His friend responded that he knew just the guys to send over to the club for a quick rehearsal before the show.

He was met at the Continental Club by local drummer Shane Lauder, bassist Lawrence Cevallos and accordion wizard Roberto Rodriguez. At first glance Graham admits he had to do a double take at the accordion, a reaction Rodriguez is used to now after years of adding accordion to unlikely genres like Houston ska legends, Los Skarnales.

“I’m like, oh shit what are we doing here? Then we started playing and it’s like all the stuff from my younger days and nowadays collided. It was fucking beautiful, from the first few notes of the first song my head was blown and I’m looking over at Robert like, God damn this is it,” he says. 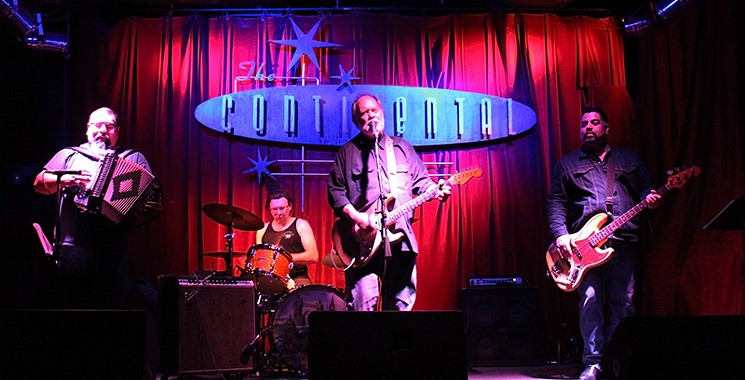 Roberto Rodriguez, Shane Lauder, Jon Dee Graham and Lawrence Cevallos on stage at the Continental Club.
Photo By Gladys Fuentes
It was no doubt a magical moment that combined all of the sounds and influences Graham and the other band members carry around with them naturally, creating a punk rock, conjunto, roots rock collision.

“Here’s the thing, people always ask ‘What are your influences?’, in my house growing up it was hard country and then growing up on the border it was conjunto and tejano because every dance you went to that’s what was playing.”

Graham describes how on a clear day in Quemado he could pick up a radio station from San Antonio where the local DJ there would spin rock and punk rock, making no distinction between the two and exposing a young Graham to a sound he latched onto for the rest of his life.

“There's something more exciting and more free,” he says of the early days of punk. Graham famously went on to be in The Skunks and describes a night of jamming with the Clash at the Continental Club in Austin, playing hours after the doors were locked and leaving once the sun was up the next day.

Though connecting the dots from punk rock to conjunto may seem like a stretch, both genres were created by people on the outliers of society screaming for a way out, or a way in. “When you listen to Los Tigres del Norte, what is more punk rock then Los Tigres,” asks Graham.

“The Clash was singing about being held down, about struggling, about winning all that stuff is what Los Tigres sing about.  “Should I Stay or Should I Go”, you could pick that song and apply it to any other tejano song and it works.”

Graham admits that growing up, like so many other young people, the accordion was perceived as terminally uncool and something left to older generations for their kind of music. “As it turns out, the button accordion is super cool, there's nothing like it.”

“We just clicked right away,” says Rodriguez of their chance encounter that night. “He looked to his left, to his right and looked behind and he was like ‘God damn, what the hell!’, but I saw his face and his face told me everything.”

Graham and his band mates all described it as "magic" and Graham had a guttural response to the music they made that night. “It's so crazy that it just happened by accident, it is how the best things happen,” says Graham.

“By the third show that we did together he was so full of energy and full of life,” describes Rodriguez. “People were like, ‘We don’t know what you guys did to him but he’s really alive again’. It just goes to show how much power that has, when you get back down to the roots and the raw energy of the music itself being produced by just us.”

It is fitting that after a brush with death, destiny sent Graham the sounds from his roots to resuscitate him creatively. "I'm a seventh generation Texan and I'm strong you know, a stubborn son of a bitch, you can't kill me.  The freaky thing about it is the thought that it happened so easily, now that being said I'm not living my life waiting and worried about the next time. If anything, after that what it did for me was I'm like fuck that, enjoy today."


"I'm a seventh generation Texan and I'm strong, you know a stubborn son of a bitch, you can't kill me."


Graham will continue to play every first Thursday whenever possible and the artist plans to record an album with his new crew as soon as his current project wraps up. He has even named them fittingly, Los Gallos Luchadores.

“The next record after I finish this one is going to be with these guys because it answers every influence I've got. I can throw down like some crazy atonal punk shit and they hang and I can throw down a love ballad and they get so sweet onstage,” describes Graham.

Jon Dee Graham and The Fighting Cocks will perform Friday, April 10 at the Continental Club, 3700 Main, details TBA visit continentalclub.com for more information
KEEP THE HOUSTON PRESS FREE... Since we started the Houston Press, it has been defined as the free, independent voice of Houston, and we'd like to keep it that way. With local media under siege, it's more important than ever for us to rally support behind funding our local journalism. You can help by participating in our "I Support" program, allowing us to keep offering readers access to our incisive coverage of local news, food and culture with no paywalls.
Make a one-time donation today for as little as $1.