Houston Keeps the Lights On for Journey 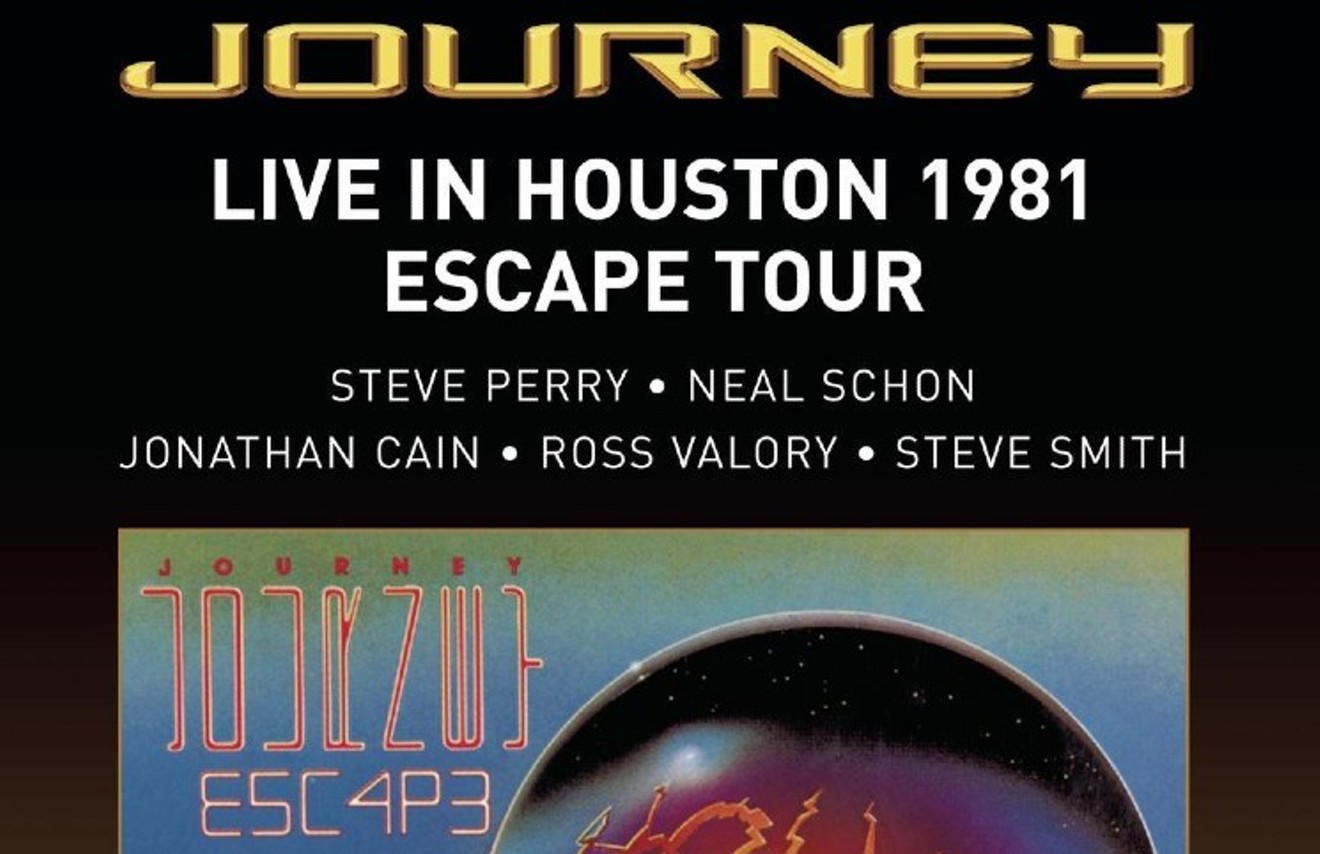 Journey comes "home" to Houston tonight Album cover art
The earliest hours of any new year can be rough and unfortunate for over-drinkers, fraught with bad ideas formed in a soaked brain and spilled out unfiltered IRL. That was the case mere weeks ago when cable TV personality Andy Cohen called this evening’s RodeoHouston headliners “fake Journey.”

The Rock and Roll Hall of Fame act was performing on a competing New Year’s Eve telecast and Cohen was throwing shade in the darkness of midnight. A Twitter kerfuffle – “Twitterfuffle?” — ensued with fans of Journey coming to the defense of the classic rock powerhouse which takes the stage amid tonight’s rodeo revelry.

As wars go, particularly in light of dangerous ones with actual repercussions which have since occurred, it was quaint, short-lived and harmless. Cohen claimed the band was a façade since vocalist Steve Perry, who sang on its biggest hits, had long ago departed its ranks. Cohen’s rambling did stir some rough and unfortunate memories for this particular music observer. Not necessarily in a drunken stupor, but at least in a less enlightened moment, I once wrote how Queen without the incomparable Freddie Mercury was a sham. I was told that the band’s preferred replacement vocalist Adam Lambert was “guaranteed to blow your mind,” but I had no idea how killer Queen would be with Lambert. Then I went to the show and had to eat my words. Blown away.


I don’t know what Andy Cohen is doing this evening but I do know there are plenty of good drinks to be had at the rodeo and probably a few seats left for Journey — the real Journey — performing with its longtime lead singer Arnel Pineda and legendary guitarist and band founder Neal Schon. As someone who once made the same mistake as Cohen, albeit to a much smaller audience, I’d encourage him to hop a plane, don a Stetson and mosey into NRG Stadium to take in Journey in its true glory, a glory built on timeless songs.

Whomever writes blurbs for the Rodeo has listed on the event page their own list of “Top Five Songs” for the band which, unbelievably, is making its RodeoHouston debut tonight. It’s unbelievable because Journey has a long relationship with Houston, going back to the ‘70s and early ‘80s when it rocked the Texxas Jam at The Astrodome. For longtime fans and rock and roll lifers, their set tonight will surely conjure memories of those days, but with the reefer haze of yore replaced with dust kicked up from spirited rounds of mutton bustin’.

RodeoHouston’s official Top 5 includes, in no particular order, “Don’t Stop Believin’,” “Lovin, Touchin’, Squeezin’,” “Who’s Crying Now,” “Open Arms” and “When You Love a Woman.” Those songs are classics. You wanna hear them, but they’re expected on such a list. So, I turned to some experts for a few other songs that maybe should crack the set list. They’re not music pundits or even musicians, just fellow “olds” from Houston I trade text messages with occasionally about sports and music on a smartphone thread. We’ll call one of them “Mode” because he’s always in work mode. Except tonight. He’ll be relaxing at the show and singing in a not-too-shabby alto to his favorite Journey tunes. He offered “Girl Can’t Help It” from 1986’s Raised on Radio as a favorite.

Also on the thread is an old high school friend we’ll just call “V Smack,” because that’s how he’s saved in my phone contacts. Since the subject was Journey, he reminded me (as he always does when the subject is Journey) that he was at their November 6, 1981 concert at The Summit, forever immortalized by the live album Live in Houston 1981 – The Escape Tour. From that album he chose “Mother, Father” as a favorite. You might or might not hear that one tonight, with Journey cramming almost 50 years of songs into an hour or so, but it’s perennially on the extended Journey set list and worth dialing up after the show while you’re sitting in Rodeo traffic.

V Smack and I took Mrs. Sendejas and Mrs. V Smack to Cynthia Woods Mitchell Pavilion for Journey in 2014 and we were all in awe of Pineda leading the charge. His energy is incredible and his vocals are true to the spirit of Perry’s originals. There’s nothing “fake” about his devotion to the songs, which are the real stars of any Journey show. This is a point my brother Dre, also on the thread, made. You could have Steve Perry, Schon and any number of virtuoso musicians on stage. Their combined playing talents would never have meant much without the songs, so wonderfully crafted and enduring. Nineteen top 40 singles, 25 gold and platinum albums, 100 million records sold world-over. The songs bring us back and they’re what make Journey the real deal.


At that Cynthia Woods show the band’s second song of the night was “Separate Ways,” Dre’s favorite, and it went into “Any Way You Want It.” There were still 15 or 16 songs to go but we were already drained of the energy and emotion of those two back-to-back cuts. Expect that kind of energy tonight, concert-goer.

My personal favorite Journey song is “Lights,” because it’s about hometown love, San Francisco in Journey’s case. The city’s never mentioned by name so the song's become an anthem for any of us who truly love where we are from, some place we feel stubbornly proud of and long for when we’re away.

I don’t know if they’ll play it tonight, but I hope they do because Houston’s had the lights on for Journey for a long time. I hope they feel home away from home here because they've created some important moments in Houston, whether they were ripping the roof off the ‘Dome or laying down classic live tracks at The Summit or re-energizing their brand in The Woodlands or finally playing for audiences in the world’s premier rodeo setting, an event that is just so Houston. “Ooh, I wanna be there in my city,” the song goes, and I won’t stop believin’ that the one, true Journey has to feel that way at least a little about Houston.