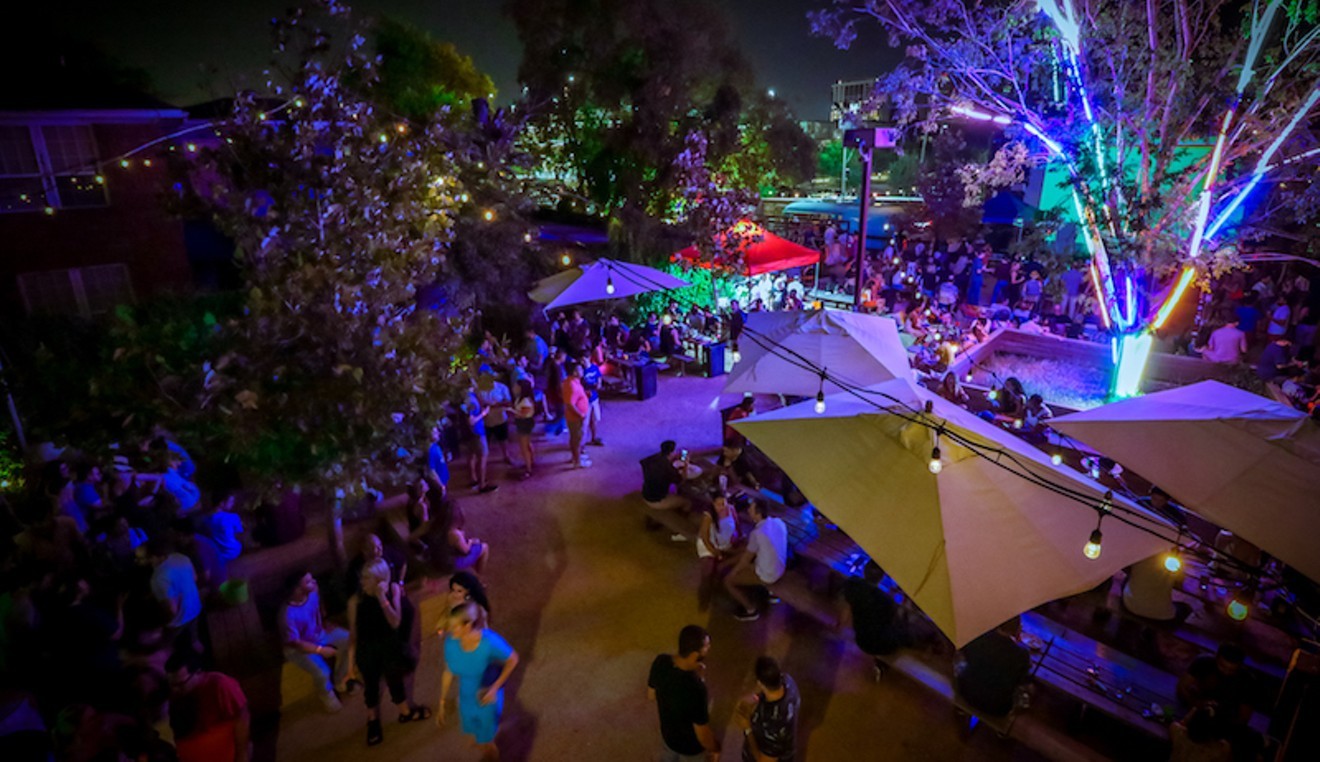 Axelrad with a rooftop concert, pre-COVID. Photo by Marco Torres
Houston and New Orleans share a bond thanks to hurricane season. If one of the Gulf Coast cities takes a storm’s direct hit, the other comes to its aid. This week, our neighbors in Louisiana were pummeled by Hurricane Ida. The storm has caused an estimated $50 billion in damage, widespread power outages and at least a half-dozen deaths. It’s Houston’s turn to deliver some aid and good vibes, if possible.

The shows are free and a portion of each evening’s sales at Axelrad will be tabbed for relief efforts. The storm made landfall just days ago and its remnants are still wreaking havoc in the northeast, so initiatives like this are developing daily. Mario Rodriguez is Axelrad’s music director. He said the series’ organizers hope to have a full list of organizations earmarked to receive the funds raised from the shows by the middle of next week.

“We know of different nonprofits and different options, but we’re trying to find out which would be the best for us,” he said. “Kermit Ruffins will also help us figure out the best options since he’s from New Orleans and he’s currently also displaced. He has his own music venue and bar in New Orleans and no power and no way to get back over there. So, this is going to be really helpful for him and his musician friends.”

Ruffins is a celebrated New Orleans jazz trumpeter and vocalist, a co-founder of the iconic Rebirth Brass Band and a solo artist who’s been featured in offerings as diverse as The Late Show with Stephen Colbert and Top Chef. He’s also a part-owner and investor of Axelrad, the Houston yin to the funky yang of his New Orleans-based bar Kermit’s Tremé Mother-in-Law Lounge.

“He doesn’t come out here as much as he used to in the beginning because he has his own spot over there in New Orleans but it’s a real treat whenever he’s in town and he plays out here at Axelrad. A lot of people come out and we all have a good time,” Rodriguez said. " We’re all very excited for him to be back and performing. Obviously, we’re worried too about him and everybody in Louisiana. We’re trying our best to see what we can do to help out.” 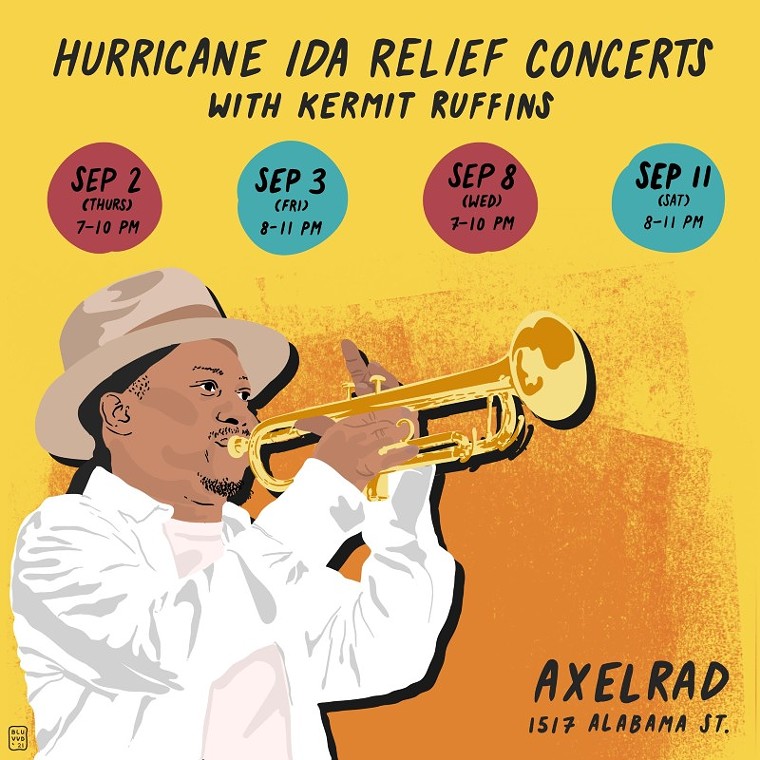 Ruffins is a co-owner of Axelrad Beer Garden
Artwork by Beloved, courtesy of Mario Rodriguez

That help will not only include proceeds from each show but any monies collected from a donate button on Axelrad’s website. The venue won’t be waiting to count those donations before it starts helping folks, either. Rodriguez said Axelrad also plans to host a free lunch for those displaced by the storm on Saturday, September 11. The lunch will precede the final show of the series later that evening. Since plans are still unfolding, anyone interested in the afternoon meal should check the venue’s webpage for updated information.

Rodriguez is responsible for music talent at Axelrad, but he’s also head honcho for Wonky Power. He and his wife, Elizabeth, are co-owners of the East End music hub, which features audio and video recording studios and a live show space. He calls Axelrad “a magical place,” one Elizabeth turned him onto years ago.

“She was like, ‘Hey, we need to go talk to Axelrad, this place is really cool, it’s so inviting, and the people there are really nice. I think that maybe we can somehow bring in music for them. It seems like one of those places that just calls for live music.’”

The couple met with Axelrad’s powers-that-be and learned that their goals for uplifting local music, small businesses and nonprofits aligned. That was seven years ago, Rodriguez said. He said the venue lends itself well to events like these.

“I don’t know, it’s just a great place to hang out during the daytime and then at night you can listen to some free music. Just the whole entire staff is very welcoming and the energy is just very uplifting there,” he said.
“Maybe it has a lot to do with so many plants and being around the trees and the nature and being outside and just having a beer, maybe. Just enjoying yourself.”

Rodriguez knows its difficult to think about enjoyment when so many so close to us are enduring the hardships brought by the storm. He hasn’t been in touch with many of his friends in Louisiana’s music communities but did note the storm disrupted plans at Wonky Power. The venue was set to host Butte, a New Orleans band, the weekend before Ida struck.


“They had to cancel because of the hurricane that was coming and they couldn’t even get out of the city,” Rodriguez reported. “I reached out, but they haven’t responded, so I’m sure they’re going through a lot of different things right now."

If there’s anything we know it’s that music strengthens us in the face of adversity. Rodriguez said the approaching shows will provide some unique opportunities to share its healing powers.

“Every show, at the end of every night that Kermit Ruffins is performing, he’s going to open up the stage for the last 45 minutes for any special guests or any local musicians or any musicians that are currently here from Louisiana — he expects a lot of people coming out and being here from Louisiana — he’s going to open up the stage for any musician to get up there and actually play with him and his band. I think that’s going to be a really special moment and it’s going to be pretty much the last hour of every night of these shows.”

The series is special, another way to strengthen the bond forged by water and wind between Houston and New Orleans. But, Rodriguez said, it’s also just part of the venue’s mission to be a good neighbor to those in need here and beyond.

“We’ve always been about trying to raise money for good causes at Axelrad,” he said. “We’re going along with everything that we’ve always envisioned about what Axelrad could be for the community.”

Axelrad Beer Garden, 1517 Alabama, hosts the Hurricane Ida Relief Concerts with Kermit Ruffins and the Htown Swingers, September 2 and 3 this week and September 8 and 11 next week. Check the venue’s website for more information on the shows and the series’ Hurricane Ida relief efforts. Free.