Kevin "Shinyribs" Russell Dares You Not to Smile 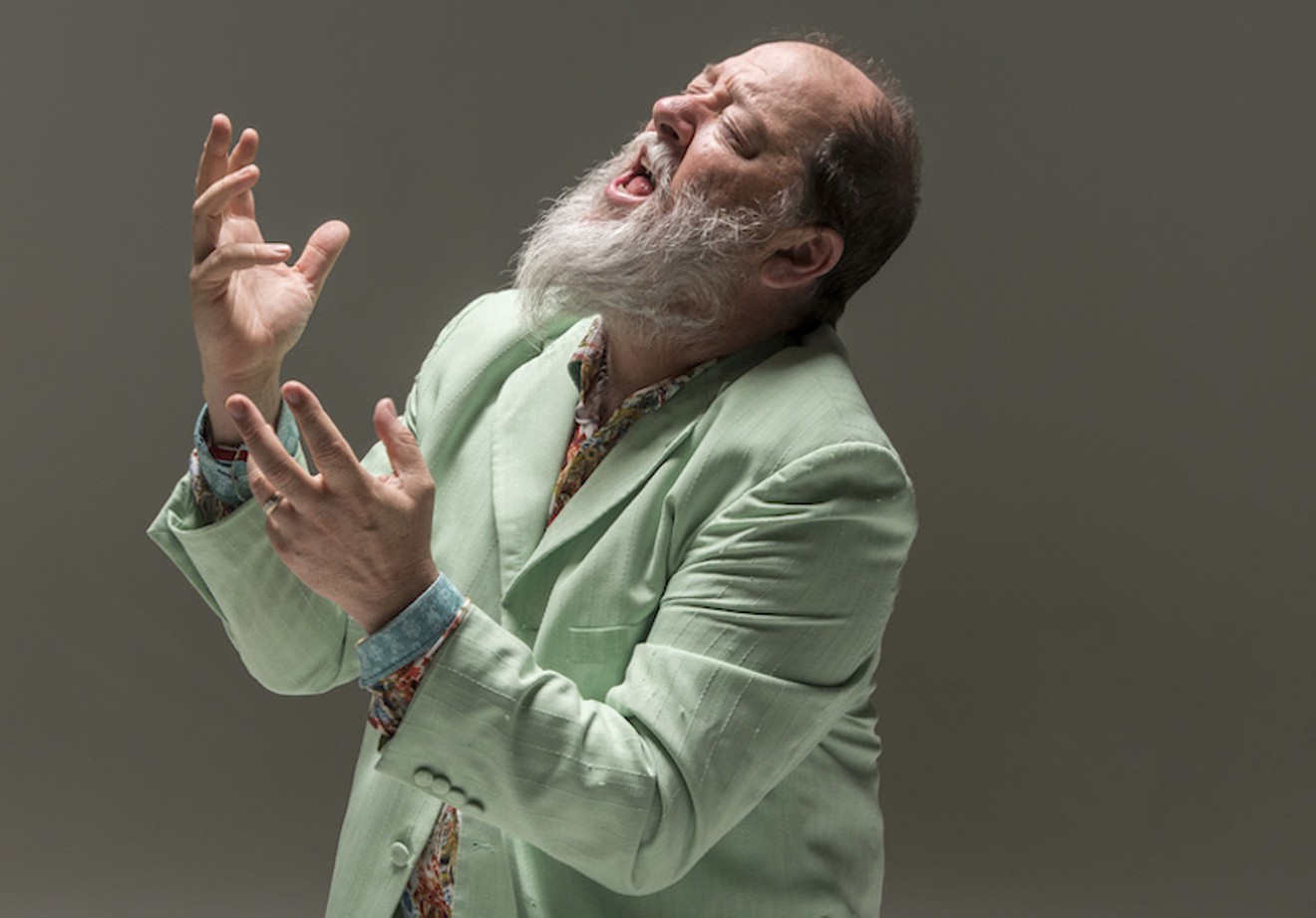 Kevin "Shinyribs" Russell invites you to a share a moment with him. Photo by Wyatt McSpadden
Kevin Russell, also known as Shinyribs, has a bevy of nicknames. Before he takes the stage you can hear him called anything from “The Baryshnikov of the Big Thicket” to “the Pavarotti of the Piney woods” and a live show will expose you to anything from his witty original songs to a number of covers ranging from ‘90s R&B to classic soul and country. He will perform two solo shows in Houston and Galveston next week at the Mucky Duck and the Old Quarter Acoustic Cafe.

To see Shinyribs live is a full body experience, whether playing with his phenomenal backing band or solo. Anyone in the audience who doesn’t at least tap his foot should check his pulse immediately. A sharp-dressed, bear of a man, Russell employs his entire body on stage while playing guitar and ukulele and singing.

“If you actually listen, all music has something of value and I get that from Johnny Cash.” explains Russell. “He had a quote about if it’s a good song, I wanna know it. I don’t care what kind of song it is. If it’s a good song, it’s a good song. I believe that’s true. Songs are a genre, that’s the genre I play, songs.”

"Songs are a genre, that’s the genre I play, songs.”


Russell has been playing songs for the last 37 years and has absorbed influences from Texas and Louisiana, two states he has called home. He was most known for his work with Austin’s The Gourds, who took a long break from each other, giving Russell the space to work on his solo project Shinyribs. “Shinyribs is a benevolent dictatorship. I got a great group of people around me who support me and buy into what I’m doing and I’m lucky that way.”

Shinyribs was born right here in Houston at Under the Volcano and has now grown a fan base so large they don’t always fit inside the small village venue. “I still like to go play there, it’s a special place.” Russell says of the venue. “I try to play places that I like to play, that are fun for me to be at; I like the people that run it, I like the production, it sounds good and the audience will be comfortable there, that’s what I try to do.”

Shinyribs has come to be known not only for his stage presence but also his use of surprising covers which he manages to make totally his own. It’s not every day you hear TLC’s "Waterfalls" sung by a large bearded man playing ukulele.

Russell explains his choices in cover songs, “Every now and then I come across something and I’m like ‘this is too badass!’, I just feel it.” He continues, “That’s a cool part of it, sharing your knowledge about something that somebody else may not know about. That’s where I try to give credit and mention it a lot in the beginning. My crowd, they weren’t necessarily gonna know a Rihanna song.”

Watching the crowd at a Shinyribs show is entertainment in and of itself. There’s always the regulars who dance non stop, the person who didn’t know what to expect and is now grooving along with the rest of them and the slow to warm up skeptic who eventually turns his frown upside down because the euphoria is as contagious as the flu.

If Shinyribs were a medicine the side effects would read: may cause all night dancing and happiness that lasts for days. This is no coincidence, explains Russell. “That’s my design. I’m having a lot of fun. Most people have fun. It takes a special person to not have fun at one of my shows, but I’ve seen them. They are around but I kind of appreciate them. I usually look for them and I sing to them and try to win them over.”

When asked if he’s ever watched someone convert during a performance Russell states, “Oh yeah! At early Shinyribs shows I saw a lot of that because people at first were like a little disturbed. They just couldn’t believe what I was doing, it’s just so ridiculous in so many ways, people just didn’t know how to react. Some people would just be negative with their body language and they’d just be looking at me like ‘Who is this fool?’ and I could see it. I would sing to them and you can see them change and by the end of show they were laughing and smiling and by the end of the show I’m like ‘success’.”

Russell’s next two shows in the Houston area will be solo shows but that doesn’t mean the audience will be missing out on any fun. “It’s a little freer in the solo thing because it doesn’t even matter if I’m in tune really.” laughs Russell. “I can just play and I can improvise at my leisure so that’s fun and I’ll do a lot of that personal exploration on stage there.”

The artist expects to dive deep into his library for the shows but doesn’t have a set formula planned. “I’m not sure what I’m going to play yet. I’ll probably play some new songs that I’ve not recorded or put out but I also might dip into my Gourds songs because those songs really have nowhere to live anymore. A solo show is probably the most appropriate place for some Gourds songs so I might lean heavily on my Gourds stuff and some Shinyribs, some new stuff and fun covers.”

Shinyribs is working on a new album set to be released this year titled, Fog and Bling. It will be Russell’s sixth solo album and he describes it as standing apart from his other albums. “The idea of this record is I built it from demos I did in my shed and then took them into the studio and just built everything on top of them. It’s very different, it has all of the elements of Shinyribs but it’s a little more like a rock record.”

Russell has advice for audience members, “Go into your own little world and enjoy the moment. it is just a moment and it’s a great moment. That’s kinda how I do it, I just let it flow and be what it is, have fun. I try to really stay out of the way in a weird way. My ego is not really involved, to some degree it is, but it’s really not. I’m drawing attention to myself but I’m not looking for a cult of celebrity, I’m not trying to be famous for that, it’s just about a moment.”

Shinyribs is scheduled to perform Wednesday April 3 at the Old Quarter Acoustic Cafe, 413 20th in Galveston, doors at 8 p.m. All ages. $20-25 and Thursday April 4 at McGonigels Mucky Duck, 2425 Norfolk, doors at 7:30 p.m. $28-30
KEEP THE HOUSTON PRESS FREE... Since we started the Houston Press, it has been defined as the free, independent voice of Houston, and we'd like to keep it that way. With local media under siege, it's more important than ever for us to rally support behind funding our local journalism. You can help by participating in our "I Support" program, allowing us to keep offering readers access to our incisive coverage of local news, food and culture with no paywalls.
Make a one-time donation today for as little as $1.