A Golden Anniversary for the Wheat State Band Kansas 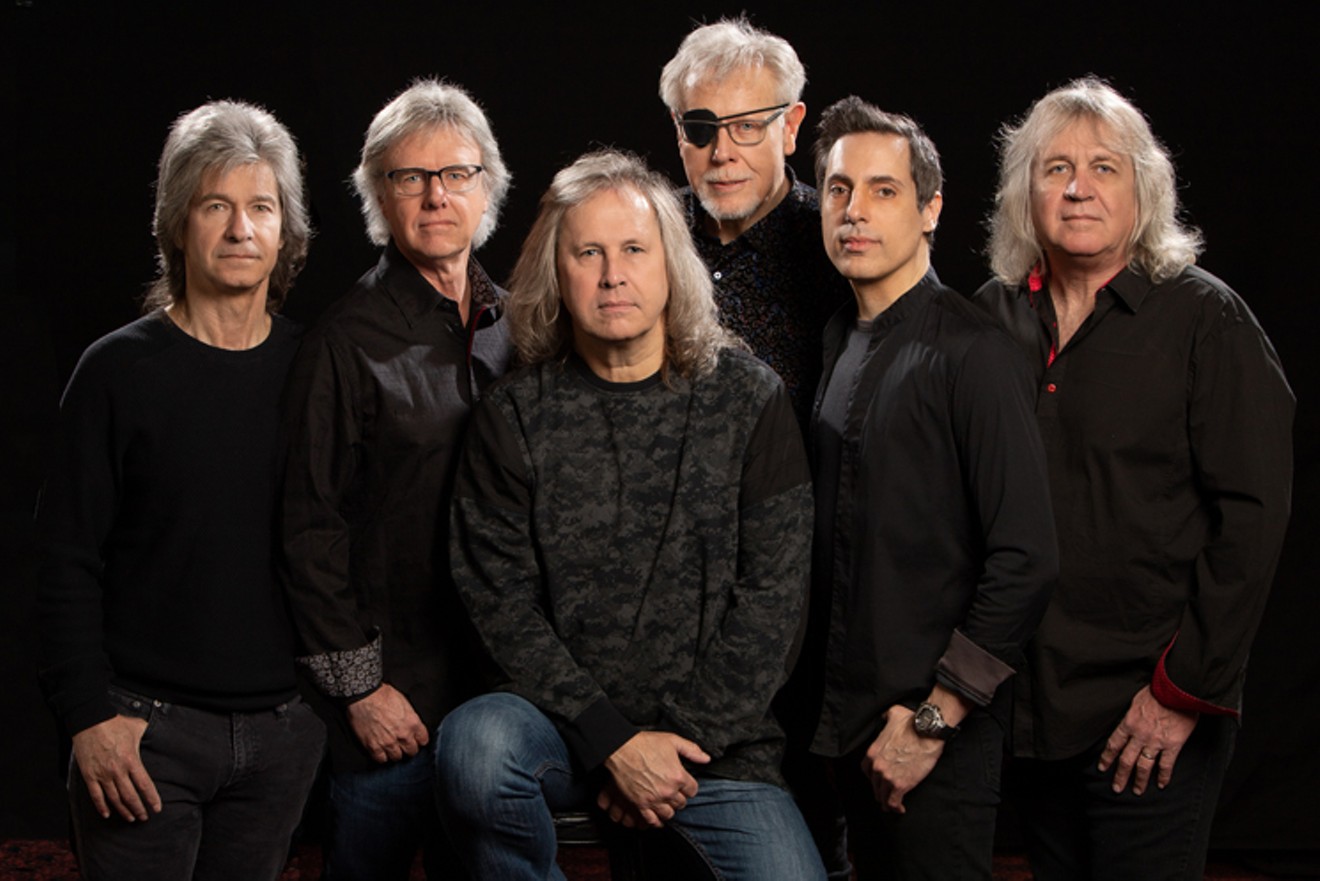 Kansas in 2022: David Ragsdale, Phil Ehart, Ronnie Platt, Richard Williams, Tom Brislin and Billy Greer. Photo by Emily Butler Photography
During the initial flush of worldwide Beatlemania, Ringo Starr was asked by on camera what he planned on doing when their bubble eventually burst in a couple of years. With utter sincerity, he told the reporter that he planned on opening a chain of ladies’ hairdressing salons. After all, nobody expected any group’s career—must less a rock and roll one—to have any sort of longevity. 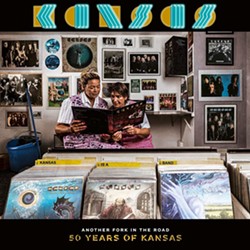 Record cover
Well, nearly six decades later, the Beatles are still just a little popular. And in the past few years, Classic Rock lovers have seen a wide variety of bands from the Doobie Brothers, Blue Öyster Cult and America to ZZ Top and Uriah Heep celebrate the 50th anniversary of their founding or first record with special tours or projects.

Next year will see golden anniversary celebrations for groups like Journey, Yes, and George Thorogood & the Destroyers. And a certain band out of Topeka that took the name of their state as their own.

“I don’t know if I ever thought we’d make it 50 years. It wasn’t until the 30 year mark that I realized we had our foot in the door and this career had some longevity!” says Kansas guitarist Richard Williams. “Early on, you can’t imagine even being 40 years old and doing this!”

And while he knows that the days of having big radio hits are “long gone” in regards to the seismic shifts in the music industry, he’s not worried. Even though in the ‘70s and early ‘80s, he says it was very common for a successful band to put out and album that went gold (500,000 copies sold) or platinum (1 million) pretty quickly. Today, any record that sells 100,000 physical copies is deemed a “major success.”
“Hard product just doesn’t sell anymore. And even with the resurgence of vinyl, that doesn’t make a big dent,” he says, noting that most bands now make their primary income touring. And while streaming royalties are miniscule, they do add up.

“We have cultivated a fanbase that is extremely loyal. And as long as we continue to serve them, we can continue to do this. We’ll put out some new stuff and stay true to what Kansas is and not try to change anything. It’s actually a lot easier now.”

Kansas has also just released Another Fork in the Road (InsideOut Music). The new, triple-disc career anthology covers hits (“Dust in the Wind,” “Carry On Wayward Son,” “Play the Game Tonight”), deep cuts (“Down the Road,” “Journey from Mariabronn,” “Miracles Out of Nowhere”) and more recent material up to their last studio album, 2020’s The Absence of Presence (“Throwing Mountains,” “The Voyage of Eight Eighteen,” “Under the Knife”).

Williams credits Thomas Waber from InsideOut with instigating and spearheading the project, down to putting together the track selection on which Williams and Ehart had final say.
And he says Waber did it totally from a “real hardcore fan’s perspective” in not making it just another “best of” compilation. It has extensive liner notes and features ephemera from the band’s career. The two theater cleaning ladies looking at the Kansas album on the cover is a nod to a similar cover from their 1978 double live record Two for the Show.

But contrary to most anthologies, it unfolds in reverse chronological order. Adding to the time warp loop is that the opening cut “Can I Tell You” is a new version by the current lineup of a song first heard on the band’s 1974 debut.
In some ways, Williams considers the tune the most important in the band’s career, even moreso than the big hits.

“That was the song that got us the record deal. And without that song catching [legendary executive/producer] Don Kirshner’s ear, we wouldn’t have one. All the albums that followed would have never happened. Today, I’d probably be a bartender in Topeka!” Williams offers.

He says what makes the track even more interesting in that it was recorded all remotely, with each member laying down their part on their own. “We were curious about it because we hadn’t tried it before. So I did all guitar right here where I’m sitting now in my guitar room,” he says.

“Phil was in a studio in Atlanta, and then we started assembling it. Ronnie did his vocal tracks at his house from his bedroom! Tom Brislin combined it, and he sent it to Chad Singer, our front of house guy who produced it. Modern technology is pretty amazing. I could be here drinking coffee in my own home working. The process was very positive.” 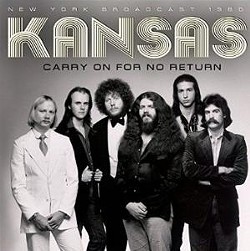 Classic Kansas: Kerry Livgren, Phil Ehart, Richard Williams, Robbie Steinhardt, Steve Walsh and Dave Hope.
Record cover
As for the current lineup, Williams says that what sticks out in his mind it is the chemistry of camaraderie. “It’s very much like it was when this band started in the days of yore. I’m not sure why that is,” he says.

“But one reason…things tended to get greedy [back then]. The realization of unless you have a part of a song, you’re not going to get any money from it. So people might be trying to change things, not necessarily because they needed to be made, but so someone could get their name on it and chunk of the pie. And now, there’s not any pie. Or not enough to worry about.”

He says the current band are all friends, share pre-show meals together, and even rehearse for 60 to 90 minutes before each show, something that they hadn’t really done before.

The original/classic Kansas sextet experienced its first loss last year with the death of violinist Robby Steinhardt from acute pancreatitis at the age of 71. And even though he had been out of the band for years and was not in the best of health, Williams says it still came as a shock.

“We’d be in contact on occasion. But yeah, I’m sure in the back of everyone’s mind it was ‘Who’ll be the first to go?’ And what would that be like. Look at Mickey Dolenz, he’s the Monkee now,” Williams says.

“Robby’s passing was not a surprise. He’d had a quadruple heart bypass and was doing well for a few years, and then he wasn’t. It was awful. And if there’s any ex-member who would have loved to be part of the 50th anniversary and come out and done special appearances at a few shows, it would have been Robby.”
He adds that “the door is open” for any of the other original former members to make guest appearances as the tour winds its way near them. But notes that guitarist Kerry Livgren had a stroke in the past, and bassist Dave Hope has “made it clear he didn’t want anything to do with Kansas.” That maybe leaves singer/keyboardist Steve Walsh, who retired from the band in 2014.

Williams also has some choice, unprompted words for the group of fans he calls “The Original Sixers” who have been “pissing and moaning” for years that only that lineup could or should continue under the Kansas name.

“To be blunt, I don’t give a shit anymore! Someone’s opinion of why I shouldn’t do this anymore because someone is not in the band, go fuck yourself!” he says. “I’m not going to tell you what you should do with your job and career and the passion you’re following. Stay in your lane, bro! Get off my lawn! You’re freeze-dried from 40 years ago.”

So circling back to something Williams said earlier, if this whole music thing didn’t work out—would he be that bartender in Topeka?

“Well, I spent a lot time in bars back then!” he laughs heartily. “Or it could be like Spinal Tap where [Christopher Guest’s Nigel Tufnel character] says 'Maybe I’d be a haberdasher!'”

For more information on Kansas, visit KansasBand.com
KEEP THE HOUSTON PRESS FREE... Since we started the Houston Press, it has been defined as the free, independent voice of Houston, and we'd like to keep it that way. With local media under siege, it's more important than ever for us to rally support behind funding our local journalism. You can help by participating in our "I Support" program, allowing us to keep offering readers access to our incisive coverage of local news, food and culture with no paywalls.
Make a one-time donation today for as little as $1.