Houston's Clay Melton Goes Back to Blue on Pandemic-created EP Photo by Trish Badger/Courtesy of Michael J. Media
It’s been less than a week since the passing of ZZ Top bassist/singer Dusty Hill. And for Houston-based blues rocker Clay Melton, it’s interesting timing since the opening cut off his just-released EP Back to Blue is a cover of That Little Ol’ Band from Texas’ “Jesus Just Left Chicago.” 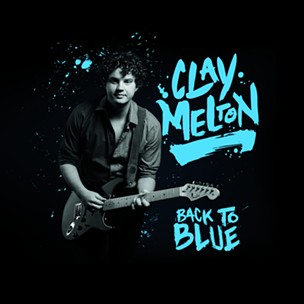 Record cover
“You can’t grow up playing blues and rock in Texas without hearing a bunch of ZZ Top, and then also playing it! They’re Texas legends,” the 26-year-old singer/guitarist says. “I was playing ZZ Top in the garage early on, and they’ve always been part of my musical journey. We wanted to do a cover, and we picked that and loved it. We had never done it live before.”

Melton says that he got to ZZ Top’s music first as a guitarist, and was initially grabbed by the slide solo in “La Grange.” “The first time I heard that, it kind of blew my mind,” he continues.

“As I’ve gotten older, I’ve fallen in love with records from a sonic perspective, and what Billy does with the guitar and his sound as a player is really special.”

Melton wrote the rest of the all-original material for Back to Blue during the pandemic. The ZZ Top cover tune, slow burning title track, and more uptempo “Excuses” were variously cut by Melton and regular drummer Zach Grindle, bassists Raymon Minton and Dan Smith, and additional musicians Billy Justineau (organ/piano) and Danny Jones (tambourine) at Across the Road Studio in Katy during the spring of this year. The other two had tracks laid down in more unique locations.

First is the meaty single “Say That You Love Me.” It was recorded live to tape at the White Oak Music Hall…just with no audience.

“It was completely empty! But that song felt like a live one, and we thought it would be best to cut it that way,” Melton says. “We hadn’t played on any stage all the year, but it was nice. Nice to feel what it felt like to play onstage again–even if it was really echoey in there! It was odd, but that’s reflected what’s been going on the past year.”
Finally, the scorching instrumental “Texas Cyclone” was intended to be recorded in a studio in Austin in November of last year. But when a previous act who had used it had members who had tested positive for COVID, the owner shut it down unexpectedly. Melton and members of his band were already staying at a nearby Air BnB, so they decided to make the most of it.

“I asked our Air BnB host if we could make a little noise for a while and he said sure, because he was a musician as well!” Melton laughs. “And it turns out the house was used to record music in the ‘70s. The cut was live, and we dug the energy.” Interestingly, the song was originally supposed to have Melton’s vocals on it—but the bandleader had just had an emergency tonsillectomy, so singing was out of the question.

As to what makes the songs on Back to Blue differ from the material on his 2017 debut Burn the Ships, Melton says it all boils down to his preferred instrument. And it’s not his voice.
click to enlarge 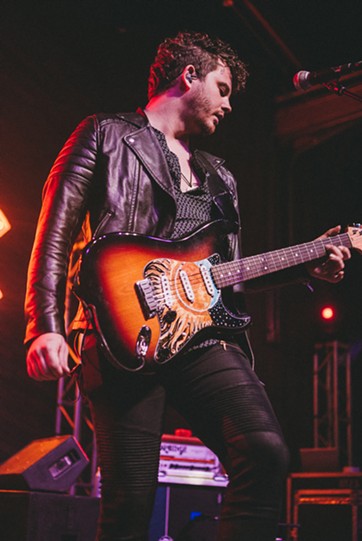 
“I had been thinking about the next batch of songs and making they more guitar-centered and my roots. I’ve always been a guitar player first before a [singer or songwriter], and I wanted to blend them together,” he says. “I’m always trying to find a process that works for me and write as much as I can. And it will be better to write music in the vein that I play.”

He adds that writing the EP was a more “solitary process,” again due to the forced isolation of the earliest parts of the pandemic.

At 26, Clay Melton has been performing onstage for exactly half of his lifetime, putting him in company with other blues rock wunderkinds like Derek Trucks, Kenny Wayne Shepherd, Jonny Lang and more recently Gary Clark, Jr., Aly Venable and Christone “Kingfish” Ingram.

He was born in Louisiana where his father hailed from, and the Meltons moved “back and forth several times” between there and his mother’s hometown of Houston. It was here at age 10 he first heard Jimi Hendrix’s version of Bob Dylan’s “All Along the Watchtower,” and it grabbed him in a way that no music he might have heard on the Nickelodeon could.

The next year, he got his first guitar, and around the ages of 13 or 14, was gracing local stages like the Big Easy, Last Concert Café and Dan Electro’s Guitar Bar. He often gigged with Houston Blues Society shows or bills that his father or mentor Carlos Johnson could get the young teen on.

A self-described “music nerd” and close follower of music history with access to the internet, Melton says that his initial love of Hendrix led him down the rabbit hole to discover Stevie Ray Vaughan, Robert Johnson, Son House, ZZ Top and “the Three Kings” – B.B., Albert, and his favorite, Freddie.

“Everybody was really welcoming. I learned a lot in those years about how to share the stage and knowing when to shut up,” he says today.

As of now, Back to Blue is rising on the Roots and Blues Rock charts both for Texas and nationally, and he’s anxious to get back on stage. Though he admits the uncertainty of the pandemic could affect some of his upcoming gigs, including some Festivals and the Texas State Fair in October. His next local show is slated for November 5 at the No Label Brewery in Katy, and then January 6, 2022 at the Dosey Doe Big Barn.

But wherever he goes, it seems that Clay Melton’s heart with always be with the Bayou City. He currently lives just northwest in Cypress at his grandfather’s old home. The elder Melton passed away in early 2020, and Clay originally went up just to sort out things with his mother. But the home held so many good memories, he decided to just stay. And that’s where he wrote most of Back to Blue.

“Houston is a great city to be in musically, especially with the blues,” he sums up. “And there’s a lot of players here that definitely deserve more recognition and respect.”

For more in Clay Melton, visit ClayMelton.com
KEEP THE HOUSTON PRESS FREE... Since we started the Houston Press, it has been defined as the free, independent voice of Houston, and we'd like to keep it that way. With local media under siege, it's more important than ever for us to rally support behind funding our local journalism. You can help by participating in our "I Support" program, allowing us to keep offering readers access to our incisive coverage of local news, food and culture with no paywalls.
Make a one-time donation today for as little as $1.