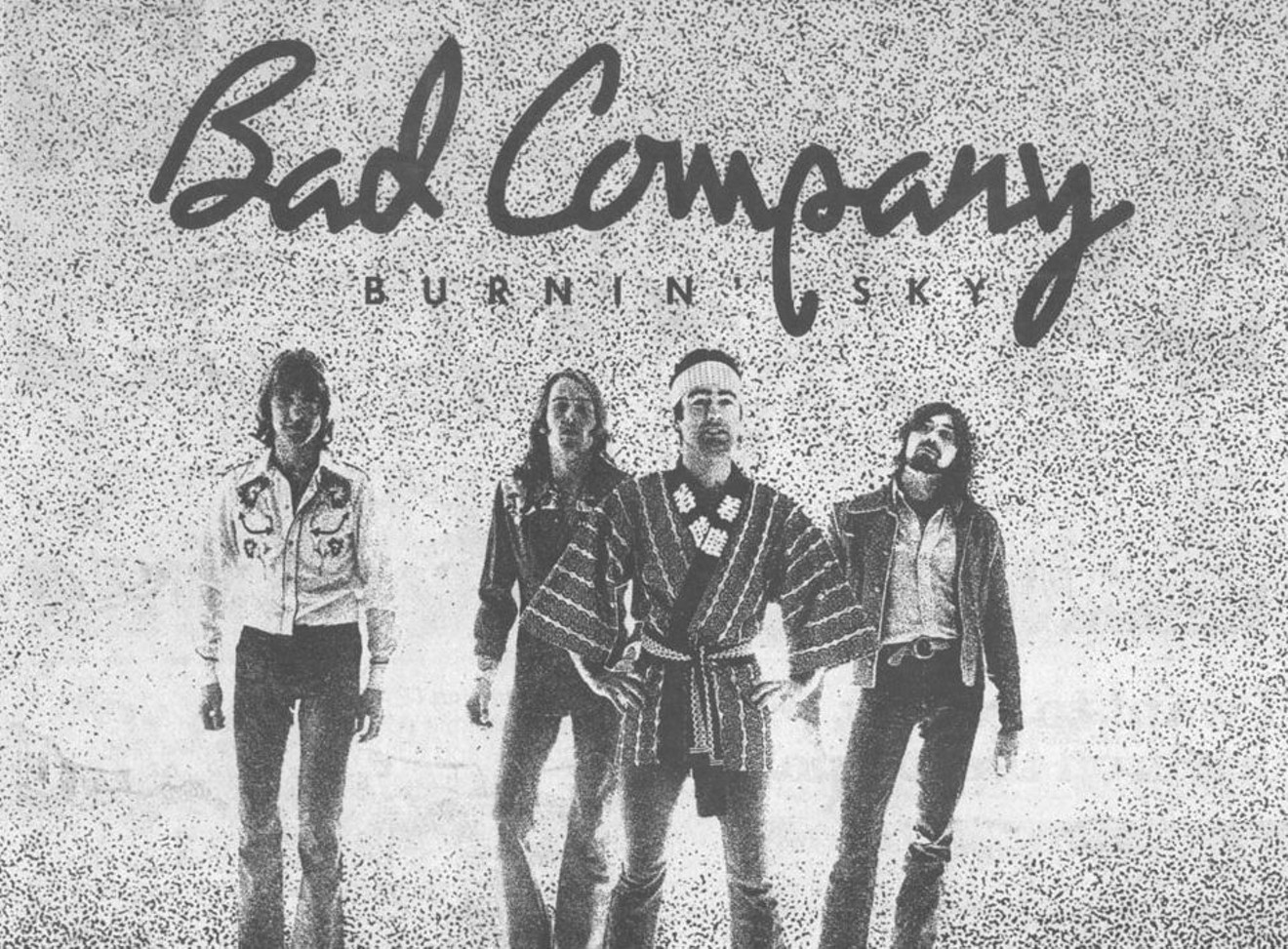 Bad Company in 1977: Mick Ralphs, Simon Kirke, Paul Rodgers, and Boz Burrell. Record cover detail
It was the middle of 1973, and drummer Simon Kirke’s band was in complete and utter disarray. Though Free had only scored one hit in the United States (“All Right Now”) they were a popular concert attraction. But the group had pretty much – according to Kirke — “ground to a halt.”

“The last two years of that band were particularly troublesome and emotional, because of [guitarist] Paul Kossoff’s drug addiction,” Kirke says. “It had become intolerable.”

When Free was finished, Kirke took off to Brazil, while singer Paul Rodgers formed a new group, Peace. While on tour opening for Mott the Hoople, Rodgers became friendly with their guitarist Mick Ralphs, who was itching to leave his employer and form a new group. Rodgers put in a call to Kirke, ex-King Crimson bassist Boz Burrell was added, and by the end of the year Bad Company was born. 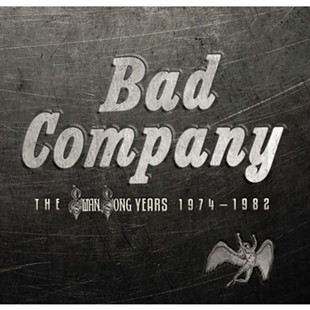 Rhino Records box set cover
“Glam rock was big with Bowie, Sweet, Gary Glitter, and T. Rex. We wanted a no-frills, bluesy band. And we wanted to have some fun for God’s sake!” Kirke says. And while popular legend has them cribbing their name from a 1972 Jeff Bridges movie, Rodgers told Spinner.com in 2010 that it actually came from a book on Victorian morals he remembered from childhood. There was an illustration of child looking up a shady street character wearing shabby clothes, smoking a pipe, and holding a liquor bottle. The caption said: “Beware of bad company.”

Looking to score a record deal, the fledgling band had a New Zealand roadie named Graham Whyte, whose countryman Clive Coulson held a similar position with Led Zeppelin. The most popular band in the world had just started their own label (Swan Song), and Rodgers wanted Bad Company to be on it.

After getting Zep manager Peter Grant’s phone number via Coulson, Rodgers called him up and pitched the group. Grant drove 100 miles from his home to see the band rehearse at Guilford in Surrey, England, and he was instantly sold.

Kirke recalls that the first album was recorded over 10 days at Headley Grange in Sussex, while others were laid down both in a similar concentrated fashion and also piecemeal. And while many classic rock record collections include a Bad Company greatest hits compilation, he says there’s much merit in the standalone record format that mixed now-familiar radio hits with deep cuts and experiments, presenting a snapshot of the group at a single point in their career.


“Albums as we remember them are not the same. They’re a thing of the past. Bands put out EP or two or three tracks here or there [for streaming],” Kirke says. “But I always think of where we were and what we were doing around the making of each album.”

When asked to choose which one of the records he would present to a 15-year-old budding classic rock fan to say “This is what Bad Company is all about,” he doesn’t take too long to answer.

“That’s a tough one. I would say Straight Shooter,” he offers. “No outstanding reason. But by the time we recorded that one, we’d been together 15 or 16 months and had a lot of touring under our belts. We were tight. I’m not denigrating the first album at all – that was a labor of love. But Straight Shooter had a cohesion that made it stand out.”

Bad Company has had lineup changes, reunions, and periods of activity and inactivity since the Swan Song years. Boz Burrell died of a heart attack in 2006. And Mick Ralphs suffered a massive stroke near the end of 2016, from which recovery has been slow and limited.

“There’s no beating around the bush. His career is finished, and it breaks my heart to say it because I love him dearly. To have seen him is not…it’s not a cheering sight. Mick is so debilitated now. It’s very sad,” Kirke says. He last saw Ralphs a couple of years ago when he took his then-new wife to visit his friend and band mate at a care facility in England.

“He can talk and type with one hand, but can’t communicate. After about 10 minutes, I had to leave room to compose myself. It was very upsetting,” Kirke says. “He’s just a great guy and fantastic guitarist and a funny man. But he didn’t keep his health together and had high blood pressure. And he paid the price. But wherever we go, there’s an outpouring of love for Mick. And I miss him very much.”


Today Rodgers, Kirke, and additional musicians play occasional gigs as Bad Company, including a still ongoing string of dates opening for Lynyrd Skynyrd on the southern rockers farewell tour. They also played a gig earlier this year in Houston at the Woodlands Pavilion opening for hometown heroes ZZ Top.

Both of those bands are in the Rock and Roll Hall of Fame. But for many classic rock fans, Bad Company is either #1 or very high on the list of shocking exclusions to that club. Kirke is fairly forthright about his opinion on the matter.

“I don’t want to be coy and say I don’t give a shit one way or another. I do!” he says. “I do care, and I think it’s a glaring error that Bad Company and Free have not been inducted or at least nominated. Both bands have been very influential. It’s wrong, and I definitely feel slighted.”

Still, he’s cognizant of his fortune that’s been able to afford him a long-lasting career in music, and playing it for thousands of rabid fans still to this day.

“I’m so grateful to have gotten two bites of the apple. To be in one well-known group is great. But to be in two, it’s very humbling.”
KEEP THE HOUSTON PRESS FREE... Since we started the Houston Press, it has been defined as the free, independent voice of Houston, and we'd like to keep it that way. With local media under siege, it's more important than ever for us to rally support behind funding our local journalism. You can help by participating in our "I Support" program, allowing us to keep offering readers access to our incisive coverage of local news, food and culture with no paywalls.
Make a one-time donation today for as little as $1.