Mark May Confronts His Demonic Side 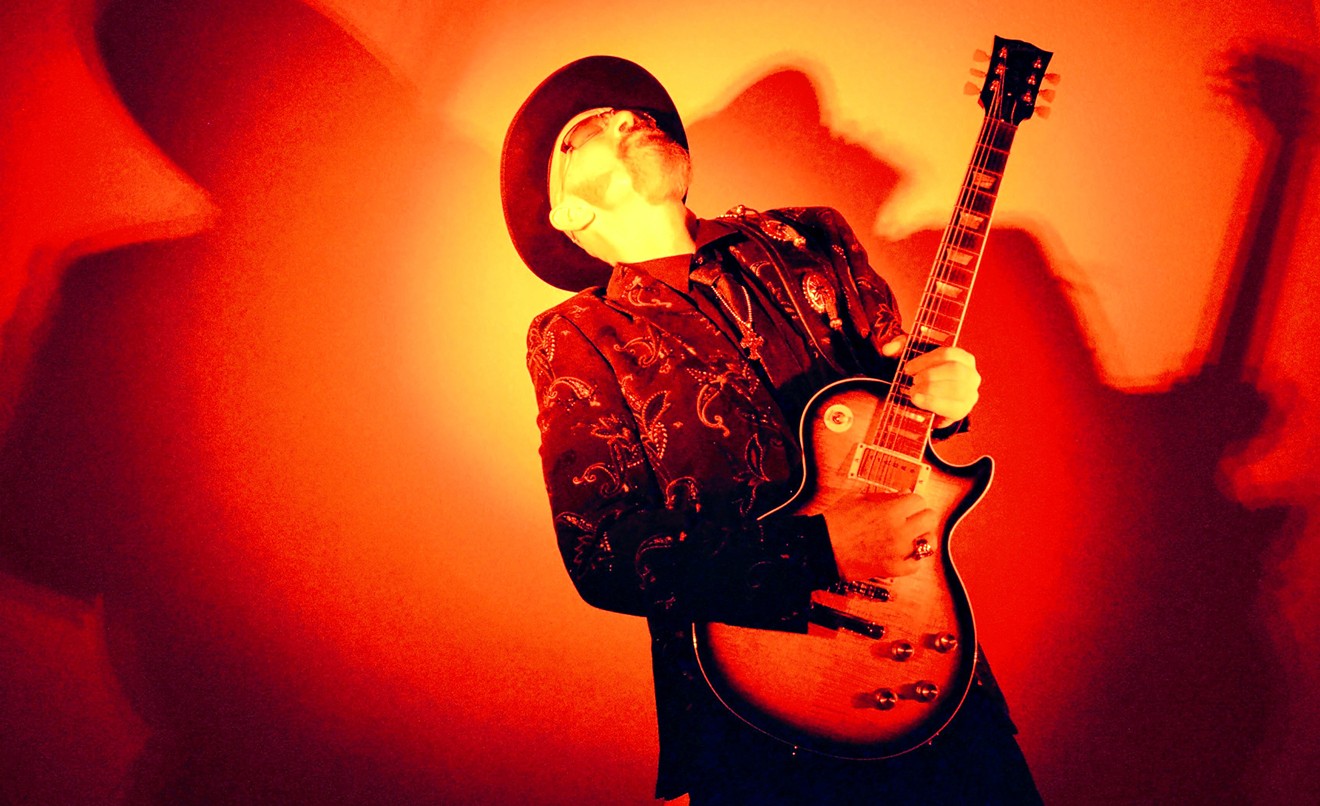 Mark May addresses both elemental and inner destructive forces on his new album. Photo by Wendy Turner
If there was any single event in recent history that has given the people of Houston the most of collective case of the blues, it would have to be Hurricane Harvey. And while it’s been almost three years since that most unwelcome guest arrived at the city’s proverbial doorstep, it’s still very much on the mind of Houston-based blues rocker Mark May.

“One hot August evening, Harvey came around/And he left so much sorrow, in good old Houston town,” the singer/guitarist offers on his raucous song “Harvey’s Dirty Side.” “In this old big city, it'd be hard to find/More death and destruction, than he left behind.”

Gulf Coast Records cover
One can easily picture a video of May performing this one, he and his guitar screeching on the top of the JP Morgan Chase Tower downtown as the winds whip and rains pour around him. But he wants to be clear the subject is, indeed, the filthy destroyer of the meteorological kind.

“It’s not about Harvey Weinstein!” May laughs. “Hurricane Harvey was the craziest thing to happen to this city. Well, until this coronavirus stuff. But just seeing people’s houses flooded with 10 or 15 feet of water. Even if you just got five inches, you had to go in and clean and rebuild. It affected so many people, and it was scary to see the town come to a standstill.”

And while May says he was fortunate that he didn’t live in an area at the time that got flooded, he had many friends who did and “lost a lot of stuff.” He adds that the name “Harvey” is kind of dorky, and it would have certainly been better for him lyrically to write about Hurricane Katrina instead.

That track and 10 others made up the Mark May Band’s new record, Deep Dark Demon. It’s coming out on July 17 on Gulf Coast Records, the label owned by the multi-talented player/producer Mike Zito (Royal Southern Brotherhood).

Deep Dark Demon is indeed one of the best efforts from a performer whose musical roots have run deep in Houston since he arrived here in the early 1980s. The core lineup includes May on lead vocals/guitar, Billy Wells (guitar), Darrell Lacy (bass), and Brandon Jackson and Geronimo Calderon (drums). There’s also appearances from Eric Demmer (sax), Barry Seelen and Shawn Allen (keyboards), Al Pagliuso (percussion), and Mike Zito himself (guitar). May wrote all of the tracks except “Invisible Man,” and he produced the release with Calderon, which was recorded at Houston’s Westroom Recorders.

The last was written by May as a showcase when he was one of two artists to represent Houston at the 2018 International Blues Challenge competition in Memphis.

“It doesn’t help you when you go there and just rock out, so I wanted a slow driving, old school blues song,” he says. “Everybody’s got issues that they have to deal with, demons that they’ve got to overcome to get through life. It’s about that.”

“Walking Out That Door” manages to recall both the Arc Angels and the Allman Brothers Band —  the latter of which May knows a bit about, as he spent several years touring with ABB founding member Dickey Betts in his Great Southern band. Other tracks bring to mind Stevie Ray Vaughan (“Sweet Music”) or Santana (“Back”). But make no mistake – Mark May is wholly his own artist.

And on many tracks, May takes extended guitar solos, which range from fast-fingered single note picking to fiery power chords. It’s no coincidence that the guitar is more present than in his last several records. “I wanted it to be a bit more like our live performances and be dynamic. I’m trying to create big moments in songs, and I don't think I’ve captured that in a lot of my other albums,” he offers.

On record closer “My Last Ride,” one could be forgiven for assuming it’s May’s own farewell to the road and music, given its lyrics and end-of-life reckoning theme. But don’t worry, fans – Mark May isn’t going anywhere yet. And he’s perfectly healthy.


“There’s no medical situation!” he laughs when it’s suggested maybe he’s keeping something from a reporter’s penetrating questions.

“I’ve just had a lot of friends who have passed away and you never really know when something’s going to happen to you. It’s also about just getting older and thinking about things that have happened in you. You can’t spend your whole life without even accidentally hurting some people. And you think about things you can to make up for that or face up to things about yourself.”

Of course, Deep Dark Demon is being released in the Age of Coronavirus, meaning that May can’t really play a lot of live gigs to promote it (though he has done a few one-off shows). So he’s learning to adapt.

“It’s an interesting time. I’m trying to look at it as a learning experience. I’m not the most tech savvy and social media guy. I just did my first livestream! And it was a bit nerve-wracking because I’m not a solo artist, I normally play with a band. I’m more comfortable in front of 10,000 people than a cell phone!” he laughs.

“I know I’ve got to learn to connect with my audience in new and different ways now, but I sure miss the gigs. It’s strange to be sitting at home so much, especially with a new album.”

Deep Dark Demon comes out July 17 and will be available on streaming services, iTunes, and Amazon Music. Physical copies will also be available on May’s website at MarkMay.com
KEEP THE HOUSTON PRESS FREE... Since we started the Houston Press, it has been defined as the free, independent voice of Houston, and we'd like to keep it that way. With local media under siege, it's more important than ever for us to rally support behind funding our local journalism. You can help by participating in our "I Support" program, allowing us to keep offering readers access to our incisive coverage of local news, food and culture with no paywalls.
Make a one-time donation today for as little as $1.