The Hellacopters Have 20/20 Vision into the Eyes of Oblivion 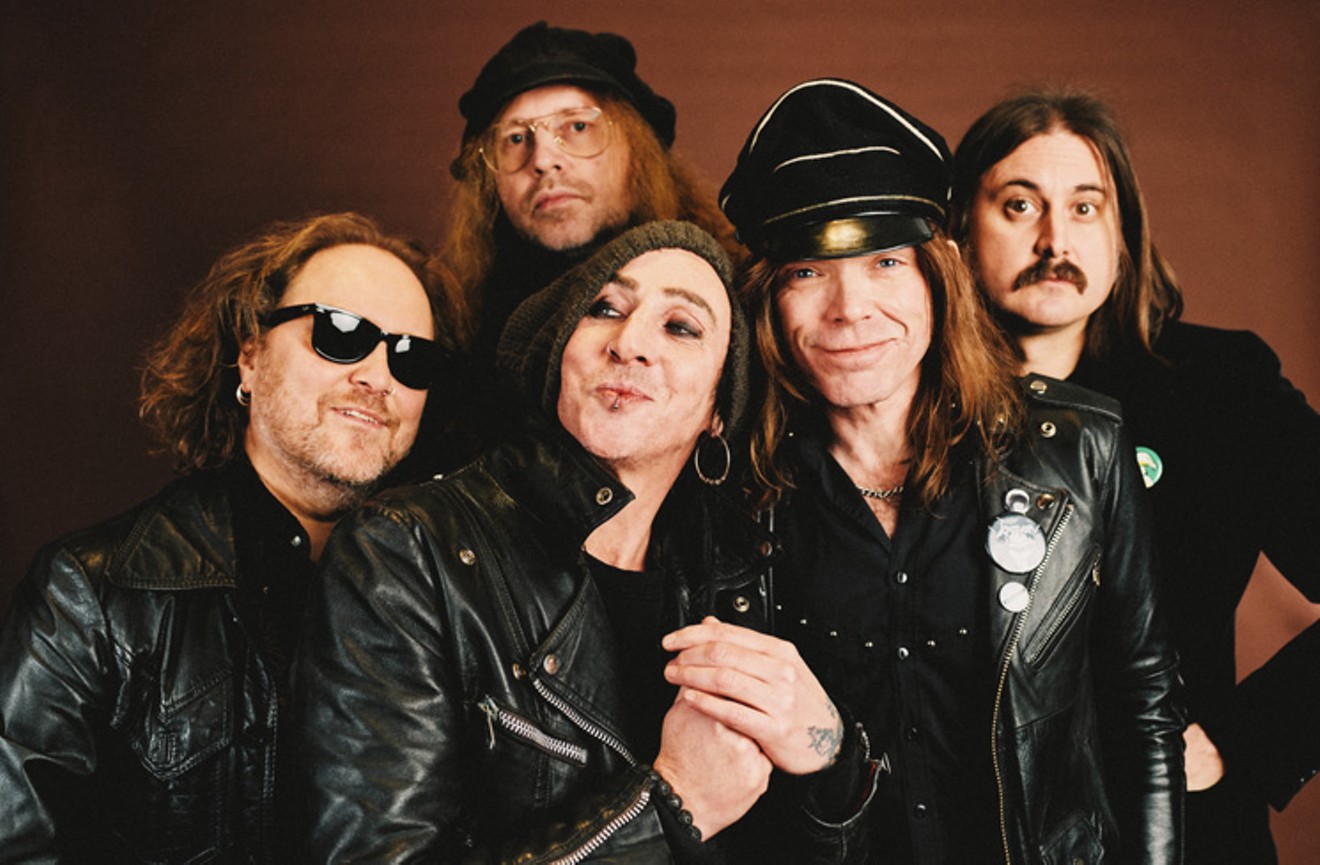 The Hellacopters: Robert Eriksson, Anders “Boba Fett“ Lindström (back), Dregen, Nicke Andersson and Dolf de Borst Photo by Micke Sandström
In terms of subject matter, the raw and raucous genre of garage rock doesn’t often stray into contemporary social and political topics. Sweden’s The Hellacopters have usually stuck to that norm in their music over the 25+ years the band has been together.

Record cover
But for their new record Eyes of Oblivion (Nuclear Blast Records), singer/guitarist and main songwriter Nicke Andersson was inspired to broaden the palette a bit, especially on two numbers in which he sings from the perspective of the people with whom he has issues.

“Beguiled” is about the neediness and destruction of internet trolls (“I will scold you from the sky/I’ll be the center of mass attention”). “It puzzles me how people can get when they’re anonymous, and I wonder if we all have a streak of that or it’s a disorder,” Andersson says via Zoom from Sweden.

He saw that firsthand in online comments about a side project, the multinational heavy metal band Lucifer, which is fronted by Johanna Sadonis. “The things that people would say about her were just…shocking. Just nasty things,” he offers. “She was targeted so much. Everyone thinks their opinion matters, but that’s up for debate.”

And “Tin Foil Soldier” is about a certain group of political conspiracy nuts/military wannabes who think they alone can “save” their country (“I’m a man on a mission/Last line of defense” and “They call us a mob but we keep evil at bay/They’re out to get you/They won’t forget to feed you fiction and lies.”

On the latter track, Andersson was both fascinated and repulsed by the January 6 attack on the U.S. Capitol as he watched it unfold on TV.

“The pandemic has really brought out the ugly face of humanity. And those people who stormed the Capitol—where does that come from? These people with alternative truths?” he says. “I get being skeptical about [government] but this was something just insane! And it’s not just in the U.S. They’re here. They’re everywhere.”
He adds that the tin foil hatter used to be “a friend of a friend” but can now be as close as a sister. Andersson says that there are certain topics he even avoids with his own father, because he knows they will never come to any sort of agreement.

“I don’t know where he reads his stuff, and he wasn’t like this before. It’s sad to see. He thinks that the global environmental crisis is a hoax. And I say ‘Well, Dad, is the earth flat as well?’ But I can’t go into that discussion,” he offers. “So, we talk about hammers and nails and tires. But that’s difficult, because then when you talk about cars, it goes into gas prices!”

Another track, “Reap a Hurricane” is currently in frequent rotation on the SiriusXM Underground Garage channel and was recently named the “Coolest Song in the World This Week.” Unfortunately, it’s about the only station that plays contemporary garage rock like the Hellacopters.
“It’s kind of the same thing here in Sweden. We might get played on some so-called ‘rock’ channels, but it’s not happening,” he says. “But there’s always internet radio. It’s so weird to keep up with these streaming services and playlists, and I don’t understand it. But maybe I don’t want to!”

The Hellacopters formed in 1994 with the original line of Andersson (vocals/guitar), Dregen (guitar), Kenny Håkansson (bass) and Robert Eriksson (drums). Two years later came their debut record, SuperShitty to the Max! They released more records and toured the world. And along with the Hives, became the de facto faces of the burgeoning Swedish and Scandinavian garage rock scene, despite not sounding much like each other.

“'Garage rock' is a pretty loose term. But when people from Sweden get into something, specifically American pop culture, we’ve got an easier way of embracing it then, say, Germany,” Andersson says. “And we don’t dub things here, we have subtitles. So that helps learn a different language a bit better. Or maybe we’re just good at being copycats!”

Nicke Andersson
Micke Sandström
The band dissolved in 2008 after releasing Head Off. But a reunion in 2016 found them playing live again. The current lineup includes Andersson, Erickson, Anders "Boba Fett" Lindström (keyboards), Dolf de Borst (bass), and Dregen (guitar), who left in 1997 and returned in 2016. Eyes of Oblivion is the first record from the Hellacopters in 14 years.

“We did that first reunion show and more and then we said if we don’t want to be a nostalgia act, we need to make some new music. And we don’t consider ourselves that old yet. We’ve got more to deliver!” Andersson says.

“It was hard schedule, not only because of the [pandemic], but because we all have families and a shitload of other things to do. But the actual recording was completed in two or three weeks.”

Over the years, the Hellacopters have opened for some big bands including the Rolling Stones and ZZ Top on the same bill, and Black Sabbath. But above them all in Andersson’s eyes was KISS, his childhood idols. When they did four shows together in 1998, it was for him a very surreal experience.

“When I was young, being into KISS was like being into dinosaurs or Star Wars. But I thank them for that, because that’s what got me into rock and roll,” Andersson says. “On those shows, I think we just laughed. We’re this punk band from Sweden. How did we get to open for these guys? So, we had fun with it.”

Two of those shows were in front of 33,000 people a piece, and the band was “nervous” not wanting to get booed offstage by impatient KISS fans—which Andersson himself admits he might have done at a younger age.

Finally, the Hellacopters is just one of many bands, side gigs and solo projects that Andersson is currently involved with—and across other genres. When asked what he can do with this group he can’t with the others, Andersson goes back to the sound.

“I think the nice thing that you learn from breaking up and getting back together is that there’s hindsight. When we got together to record the first session, it didn’t matter what song I brought, but it sounded like the Hellacopters and no one else,” he sums up. “And I can’t get that sound with any other band. There’s a feeling.”

For more on the Hellacopters, visit Facebook.com/thehellacopters
KEEP THE HOUSTON PRESS FREE... Since we started the Houston Press, it has been defined as the free, independent voice of Houston, and we'd like to keep it that way. With local media under siege, it's more important than ever for us to rally support behind funding our local journalism. You can help by participating in our "I Support" program, allowing us to keep offering readers access to our incisive coverage of local news, food and culture with no paywalls.
Make a one-time donation today for as little as $1.