Noel Paul Stookey and All That Fazz 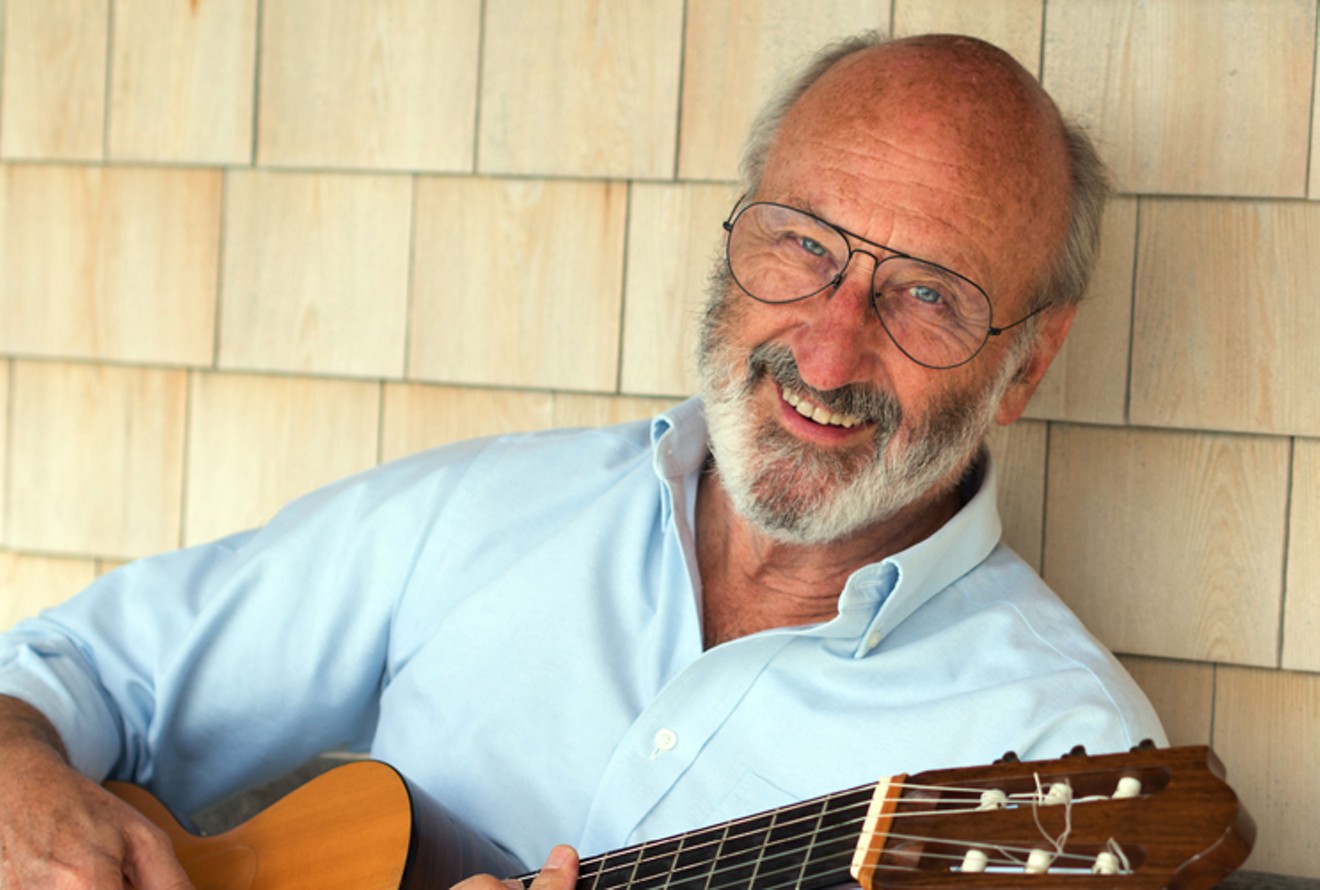 Noel "Paul" Stookey's new compilation record reaches across many musical genres. Photo by Sally Farr
Noel Stookey remembers exactly when he first heard the term “Fazz.” It was in the mid-1960s and the folk music trio he was part of (a little act named Peter, Paul and Mary) were on tour with the jazzbos of the Dave Brubeck Quartet. 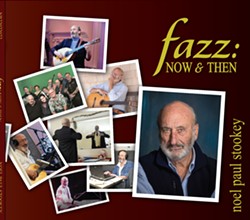 Record cover
At the end of each show, the groups would play together, and saxophonist Paul Desmond would somewhat dismissively tell they audience they were about to hear some “fazz” music (sometimes it was “jolk”), denoting a blending of the genres.

Well, the word “fazz” stuck in Stookey’s head for more than 55 years, and now serves as the title of a new compilation record, Fazz: Now & Then (Newworld Multimedia).

“The marriage of folk and jazz is adding a musical layer to the depth and story value of folk music. And you can add an emotional impact,” the spry 84-year-old says via Zoom from his soundproofed home garage. “I went to a lot of jazz concerts and festivals and had a lot of records. So, incorporating that into [folk] was not difficult.”

The 20 tracks on Fazz: Now & Then span decades and embrace not just folk and jazz, but classical, rock, pop, gospel and world music. It consists of both new and archival studio recordings, as well as live tracks of Stookey’s taken from Peter, Paul and Mary tours. Some are originals, and others covers or traditional tunes. So, was it a bit of a jigsaw puzzle to put it all together?

“Jigsaw puzzle! I’ll have to remember that! That’s the Stookey term for ‘eclectic!’” he says. “I think that most musicians would recognize that as songs come to them, they accept them or discard them based on the kind of statement they want to make on a record.”
The stepping off point was when an instrumental track by Dave Mann called “Reverence” showed up in Stookey’s email in-box. Stookey loved the gospel-inflected tune and wrote the lyrics, retitling it “In Reverence.” He then got firehouse vocalist Theresa Thomason to sing it as a duet, and Fazz was off and running.

“In these pandemic days, you rely on past connections to make current meaningful connections,” Stookey says. “And it’s intimidating when someone has control of their equipment like she does!”

Another standout song is the loopy Stookey original “Fun Police,” which imagines a not-so-distant future when all mirth, merriment, and mischievousness is outlawed and laughing is punishable by law. Stookey sings it from the cop perspective in an elastic and affected dramatic voice.

“I came up with the first verse ‘We are the Fun Police/Do you have a license for that smile?’ The Police are patrolling an area of darkness they’re hired to patrol and ask what right people have to [be happy and smile],” Stookey explains.

“I think we not only have a right, we have an obligation to bring light into darkness. It reminds us of our mutual humanity. You and I are talking at a time when there’s a lot of darkness. And it’s not just limited to the Ukraine right now.”
An emotional high point comes with the oddly-titled, Randy Stonehill-penned “Leonard’s Toaster.” The appliance of the title always makes the bread too dark or too light becomes a metaphor for a father’s frustration with his life and circumstances, witnessed every day at the breakfast table by his son. One lyric goes “Age to age dysfunction comes on like the passing of a toxic baton/Every generation is a legacy of blessings and pain.”

“When I first heard that, I was very moved. No parallels to my own relationship with my father—I was blessed on that way,” Stookey says. “But you could just not help but feel for the misunderstanding that occurs in some families. And the lack of sensibility to how [your actions] will affect your children.”

In fact, the original lyrics were too dark and "unredemptive" for Stookey, who helped write a final verse. “I tend to look at the world through rose-colored glasses,” he admits. “Everybody cracked up when I told them the idea I had, but it gave the song a note of redemption.” He says the final result even made the bass player cry.
Stookey, of course, is best known as “Paul” from Peter, Paul and Mary. The groundbreaking and hugely successful folk trio has a storied history all its own, scoring massive hits with songs like “Blowin’ in the Wind,” “Leaving on a Jet Plane,” “If I Had a Hammer,” “Puff, the Magic Dragon,” “Lemon Tree” and “I Dig Rock and Roll Music.”

When manager Albert Grossman (one of rock history’s most outsized characters) initially helped put together the trio who had until then been performing mostly separately in 1961, they needed a name. Stookey said that “The Willows” was briefly considered, because he, Peter Yarrow, and Mary Travers “were all kind of tall and lanky.”

Grossman suggested that if Stookey changed his name to Paul, they could be the more phonetically-friendly Peter, Paul and Mary.

“Two things happened. One, I went into this defensive mode, because so many Hollywood stars changed their name, and I had an aversion to that!” Stookey says.
“But in folk music, there was a song called “I Was Born About a Thousand Years Ago.” And it had the line ‘I saw Peter, Paul and Moses/Playing ring around the roses.’ And I thought the name ‘Peter, Paul, and M…’ was right there. So, I said I won’t change my name, I’ll take Paul on as a middle name. But it took over my life! And it’s now a litmus test as to how people know me, sort of an identification badge. You’re allowed in the club if you know my [real] first name!”

Both with the group and as a solo artist, Stookey has long been an advocate and champion for civil rights, social change and left-leaning causes. He also truly believes that music can affect change. To that end, he and his daughter Liz Stookey Sunde formed the organization Music To Life to promote and get artists involved in this connection via classes, performances and outreach.

“I do think that music is a much more volatile, useful and inspiring language that we all share that can move our hearts. And all music can have substance,” he says. “That realization happened in the early ‘60s when folk music came on the scene. It was first seen as a strange animal, an outgrowth of novelty tunes. But the substance of lyrics became important.”
Finally, there’s Stookey’s best-known solo hit, “Wedding Song (There is Love).” Today, it is seemingly meant to be played at any matrimonial ceremony. In fact, Stookey wrote it as a private contribution to the 1969 nuptials of bandmate Yarrow and his wife Mary Beth and was never meant to be performed more than on that single occasion, much less recorded.

But many who heard it (including Yarrow) encouraged Stookey to play it live and make it a more permanent piece of art. Featuring just himself on acoustic guitar, the single from his first solo album hit #24 on the charts. Other versions have been recorded by Petula Clark, Mary McGregor and the Captain and Tennille.

Stookey—a devout Christian—literally credits divine inspiration for its creation and refuses to take credit. So, he assigned all royalties be given to the Public Domain Foundation, which he co-founded to help “insure the future of music and activism.”

“I don’t think any of us ever really know what becomes a classic. But the riddle was who to put down as a writer? I prayed for the song!” he says. “And it’s done good things for a lot of people and causes.”

For more information on Noel Paul Stookey, visit NoelPaulStookey.com
For more information on Music to Life, visit MusicToLife.org
KEEP THE HOUSTON PRESS FREE... Since we started the Houston Press, it has been defined as the free, independent voice of Houston, and we'd like to keep it that way. With local media under siege, it's more important than ever for us to rally support behind funding our local journalism. You can help by participating in our "I Support" program, allowing us to keep offering readers access to our incisive coverage of local news, food and culture with no paywalls.
Make a one-time donation today for as little as $1.