Toto's David Paich is a Boy with His Toys 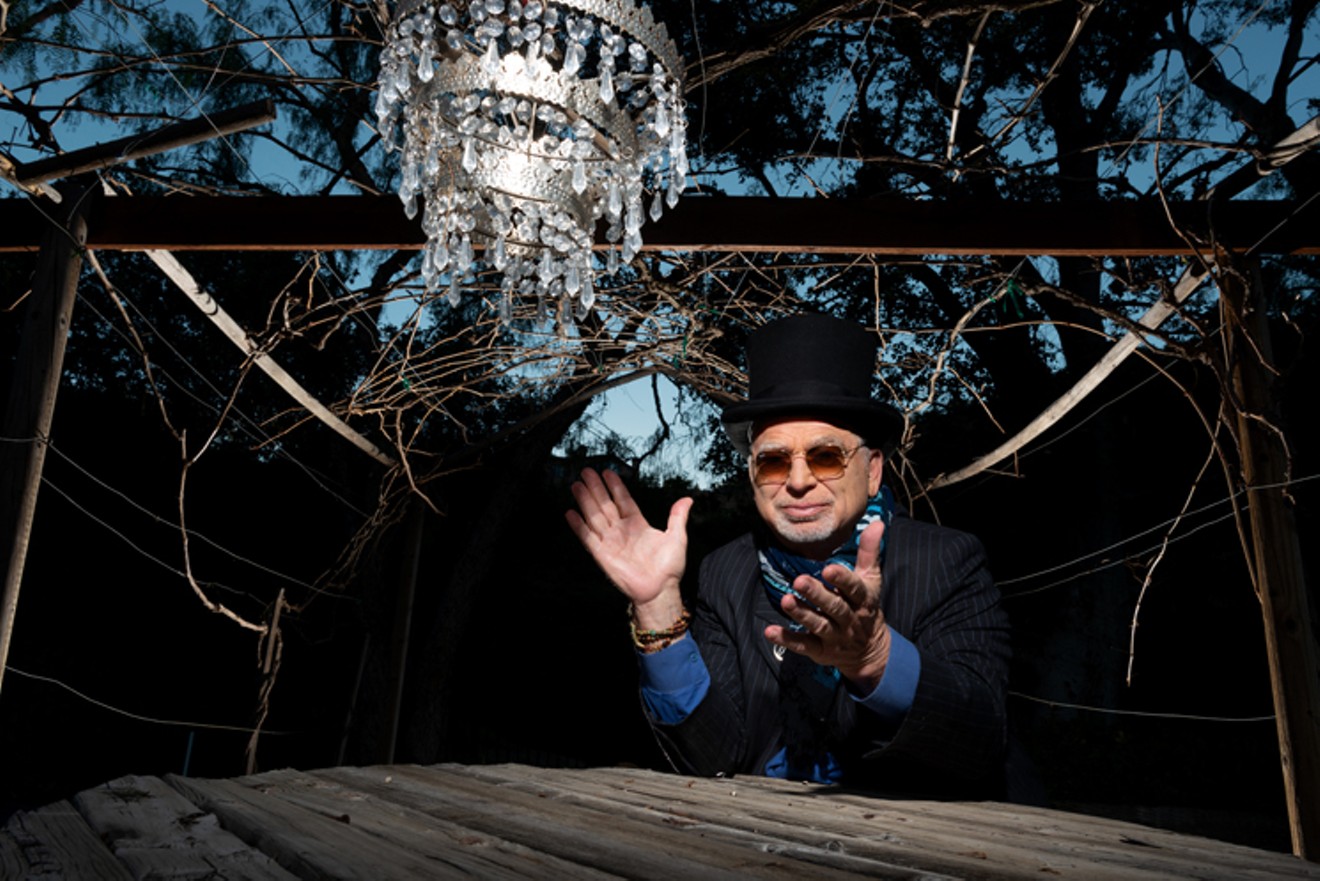 David Paich applauding, perhaps because another royalty check for "Africa" has come in? Photo © by Alessandro Solca
In this new era of Zoom journalism interviews, it’s sometimes jarring to be instantly face-to-face (albeit via computer) with a live musician who for decades you’ve only seen on stage, in videos, or photographs.

But there’s Toto’s co-founding singer/keyboardist/songwriter David Paich popping up on screen to tell me what he’s got playing over his stereo in the background.

“Can you hear that? It’s for you!” he says excitedly. I listen, but can’t place the tune.

“It’s ‘Houston, I’m Comin’ to See You’ by Glen Campbell! My first hit—well, small hit—record I wrote from 1974. I was still a teenager!”
The intro makes for a nice beginning bookend for this chat’s reason, to talk about the 68-year-old Paich’s new (and surprisingly) first-ever solo record, Forgotten Toys (The Players Club/Mascot Label Group). And as the title indicates, these were songs he’d worked on in various stages over the years, but for whatever reasons had just never completed.

“That process started when [Toto bandmates] Joseph Williams and Steve Lukather started working on their solo records before the pandemic hit. Then it got more focused for them when it did hit. They urged me to do the same because I’ve been hemming and hawing about it for years,” Paich says. 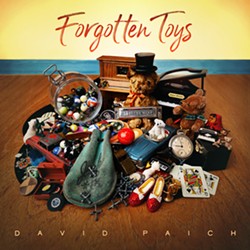 Album cover
“I’ve always got plenty of satisfaction from Toto records, but I had pieces of all these unfinished songs. So, I dusted them off and put them together like a puzzle. And it was a fun satisfying process, especially because I have a home studio. And you can connect with other musicians through Zoom and Facetime.”

The EP contains eight songs which cover a variety of genres and topics from rock (“Spirit of the Moonrise,” “Queen Charade”) to romance (“willibelongtoyou,” “All the Tears that Shine,” sung by Michael Sherwood) to nostalgic balladry (“First Time”) and even jazz (“Lucy”).

The movie-visual quality “Spirit of the Moonrise” literally came to Paich in a dream. “I had a small, short dream about a girl on a painted horse. I always think cinematically when I’m writing. I wanted it to be almost Western sounding,” he says. “It just evolved the way that it did. Joseph helped me write it, Michael McDonald sings at the end, and Lukather plays one of the best solos I’ve ever heard from him.”

“First Time” is a wistful message from the perspective of a father seeing his daughter grow up and fall in love for the first time. It’s a tribute to his now 33-year-old daughter Elizabeth. After he played it for her—and unbeknownst to him—she went into the studio with Paich’s engineer and added some of her own vocals to it.
“She didn’t tell me she did that and it traumatized me at first, like ‘What are you doing to my song?’” Paich says. “But then I heard it, and it filled my eyes with tears. In fact, after this interview, she and I are recording some backing vocals for a Spanish version that’s already been done!”

Finally, the instrumental “Lucy” is a nod to the legacy of his father, jazz pianist/composer/arranger/producer Marty Paich.

“I grew up with jazz. And my father worked with Mel Tormé, Ray Charles, Ella Fitzgerald, Lena Horne and Peggy Lee. He wrote arrangements for Duke Ellington, who I met when I was eight years old!” Paich offers. The song includes some singing and scatting from Tormé’s son James, as well as piano from Mike Lang, who died earlier this month.

David Paich with a few of his Golden Friends.
Photo © by Alessandro Solca
Liner note readers will be mightily impressed by some of Paich’s guests on this record, which in addition to Toto bandmates and McDonald includes former Eagle Don Felder, Ray Parker Jr., Brian Eno, Elton John guitarist Davey Johnstone, Greg Bissonette, and Steve Jordan. So that begs the question: Did Paich just flip open his Rolodex (or possibly phonebook spreadsheet) and just send out the Musician Bat Signal?

“A lot of them live near me, and we’ve all been friends for years. So anytime anybody picks up the phone to anybody [for a session], we’re happy to do it,” Paich says. “It’s great to have friends who are at that level of quality and professional musicianship. I’m blessed to have that.”

Outside of Toto, the list of performers that David Paich has written and arranged for or recorded with is deep. A partial roll call includes Miles Davis, Aretha Franklin, Stevie Nicks, Rod Stewart, Tina Turner, Barbra Streisand, Steely Dan, P!NK, the Doobie Brothers and even Mötley Crüe.

But his two best-known contributions are probably as a player/writer on Boz Scaggs’ 1976 Silk Degrees (Paich co-wrote hits “Lido Shuffle” and “Lowdown”), and playing/arranging on Michael Jackson’s epochal 1984 release Thriller.

“[Toto drummer] Jeff Porcaro introduced me to Boz Scaggs. We were working on Les Dudek’s album. Boz was looking for a keyboardist to co-write an album with, and I just jumped on it,” he says.

“That was my real coming of age album. It happened very fast. We went to my dad’s house and at my piano these songs just came out. We didn’t demo them at all. We weren’t thinking about hit records, we just wanted to make great music. And that became a watershed album. And Boz is very generous talking about me in interviews.”

Paich says the sessions also gave him, Porcaro, and bass player David Hungate part of the impetus to start Toto. As for his memories of the King of Pop, it’s about quality.
“Michael was such a perfectionist. He really got under a microscope and fine-tuned things,” Paich says. “Stereos and headphones got better, and people were more aware of hi-fidelity on records. Most artists leave thinking about that to the producer or musicians. Michael didn’t.”

Toto, of course, has enjoyed a string of big hits in the ‘70s and ‘80s (“Hold the Line,” “Rosanna,” “99,” “I Won’t Hold You Back”). But none has had as much interest and resurgence in recent years as “Africa,” which Paich co-wrote sings the (non-chorus) lead on.
Weezer released a 2018 hit cover version, it’s been a staple of essential Yacht Rock playlists and the soundtrack to a gazillion TikTok and travel videos.

“Thanks to Weezer, it just gave Toto a shot in the arm. I’m very grateful to them and it’s very flattering,” he says. “They did a great job with it, and it gave us a big boost with a younger audience.” Toto returned the favor by covering Weezer’s “Hash Pipe.”

Currently, while Paich is still very much involved with writing and playing new Toto music in the studio, he’s no longer a permanent touring member of the group. He prefers (like Mick Jones in Foreigner and Chuck Panozzo in Styx) to pop up onstage when and where his health and time schedule permits.
“I still love playing with the band. Some gigs are just super. We played Staples Center – I think it’s Crypto-something right now [note: It’s the Crypto.com Arena]. I don’t do the whole show, usually just the second half. But it’s exhilarating and exciting out there,” he offers.

“We opened for Journey this past year, but people were already seated when Toto came out. And all the houses and arenas were packed. I think we’re doing it again next year.” The band (sans Paich) is currently overseas on the Dogz of Oz tour.

Finally, another thing an interviewer can see in a Zoom video talk that one can’t over the phone is the subject’s surroundings. Hung on the wall behind Paich are the complete contents of the Wizard of Oz-themed game of Monopoly, artfully arranged in a frame. Paich explains.

“I am huge Wizard of Oz fan, as the name Toto implies!” he laughs. “The hero of that movie was a tiny dog. And Toto [the band] was always the little dog that could!”
KEEP THE HOUSTON PRESS FREE... Since we started the Houston Press, it has been defined as the free, independent voice of Houston, and we'd like to keep it that way. With local media under siege, it's more important than ever for us to rally support behind funding our local journalism. You can help by participating in our "I Support" program, allowing us to keep offering readers access to our incisive coverage of local news, food and culture with no paywalls.
Make a one-time donation today for as little as $1.