Lee Rocker Calls Out All Cool Cats to Gather Round 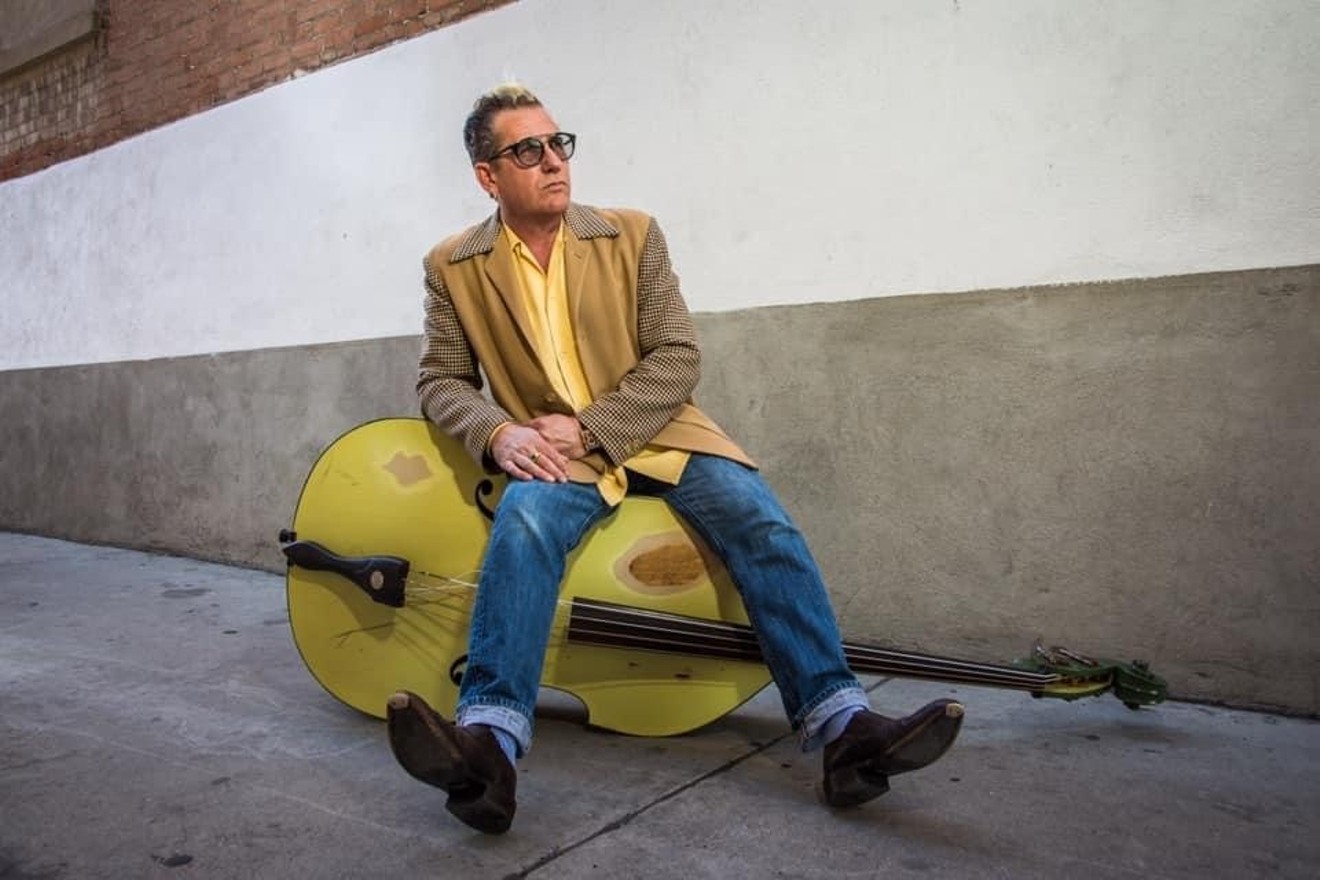 Known for standing on top of his bass while playing, Lee Rocker takes a seat on it for a change. Photo by Jeanine Hill/Courtesy of SRO PR
Musicians have always written songs on the road as inspiration hits them during their travels. But Lee Rocker has taken it to another level, and during a pandemic. The man best known for plunking the fat strings of a standup acoustic bass for the Stray Cats penned most of the material for his new solo record Gather Round (Upright Records) during a six week road trip in 2020.

He and his wife of 33 years, Deborah, jumped in their Airstream trailer and traveled from California to New York and back, a 6,000 mile journey that would take the couple through some 20 states. It was a way for the couple to somewhat escape from political, social, and medical disasters and uncertainty, and it also provide them time for introspection.

Upright Records cover
“We just hopped in and took off after the [pandemic hit], and it was an amazing journey during a horrible time. But looking back in a funny way, this record shows what I did this past year!” Rocker says from his Southern California home.

“And we had to go about making it in a completely different way. There’s the ‘Let it Rip’ way where you and the band are all together and bounce ideas off each other, but I was in the studio alone. It was a meticulous process, and a solitary one.”

When the Rockers returned to California, Lee wasted no time in booking a studio, played a lot of instruments himself, then collaborated with his regular band Buzz Campbell (guitar), Larry Mitchell (drums), and Matt Jordan (piano/organ), who sent the boss their parts recorded in their own homes or studios. It’s Lee Rocker’s first album of all original music since 2007’s Black Cat Bone.

“The songs would just come to me at points, and once you get going, they come [more quickly],” Rocker says. “And with no concerts going on like they would be normally, everything just got turned upside down.” In fact, he says the last time he and his three band members were in the same room at the same time was back at the end of February 2020 at their last live gig, before the whole world went topsy-turvy and only science nerds knew the name of Dr. Anthony Fauci.

Gather Round includes nine originals, along with a cover of The Band’s “Ophelia.” Stylistically and lyrically, there’s rockabilly rave up (“Gather Round”), slinky jazz (“Everybody Wants to Be a Cat”), shimmering love songs (“The Last Offline Lovers,” “Every Time I See You”), an instrumental (“A Dirty Martini”), and musical autobiography (“Dog House Shuffle”). But two songs stand out with a bit of a deeper meaning—albeit with wildly different themes.


In “Pickin’ and Grinnin’” it’s not hard to figure out exactly what now Twitter-less leader Rocker had in mind in writing lyrics about a powerful person who “turns a flame into a fire.” Another stanza features a call back to a signature campaign promise as Rocker sings “I got to pose this question/’Cuz this ship is really sinking/I got to shout out loud/Are you sick of all this winning?” It’s a song that’s taken on even more resonance since the events in Washington, D.C. last week.

“You know…I rarely get political with my music, but that’s a political song. This time, it’s different. And if I don’t raise my voice as an artist as to what I believe, then I’m part of the problem,” Rocker offers. “I believe we’re in a time now where things have got to change. We’ve gone absolutely the wrong way. My wife and I were on the trip and I’d read the newspaper and just get pissed off. And then read more, have some dirty martinis at each stop, and get more pissed off.”

Lee Rocker onstage in 2019.
Photo by Suzi Kaplan/Courtesy of SRO PR
On a lighter note, Rocker details his obsessive love of collecting all sorts of Elvis Presley memorabilia (as well as the fervent passions of other collectors) in “Graceland Auction.” The song was inspired by a hefty catalog that Rocker had from a 2019 Graceland auction of Elvis memorabilia.

Asked to name the favorite piece in his own collection, Rocker says it’s an emerald ring that the King had given to one of his minions. “To me, Elvis was like Superman, and then there was the music. I loved it, and this was the last song I wrote for the record.”

And was there one auction item that got away? Yes. And it involved Scotty Moore, Elvis’ original guitarist who Rocker not only knew personally, but frequently recorded and played with before Moore’s 2016 death at the age of 84.

“They had Scotty’s gold Gibson guitar, and I really tried to get it. Scotty was such a dear friend,” Rocker says. He had to placate himself by purchasing one of 80 Scotty Moore gold commemorative models issued by Gibson, each signed by Moore. Rocker is proud to be in possession of serial number 5. Which doesn't mean he won’t try to track down number 1.

As for his “other group” the Stray Cats, Rocker says they’re currently on a hiatus, having issued a reunion album (40) and embarked on a tour in 2019, that itself commemorated with a live album released last year called Rocked This Town, for which the Houston Press spoke with bandmate Slim Jim Phantom. Both records feature different versions of the Lee Rocker written and sung “When Nothing’s Going Right.”

The Stray Cats were formed in 1979 by teenage friends from Long Island, New York Rocker, Phantom (drums), and Brian Setzer (vocals/guitar). And while they found a regional following, the trio found initial wide success only after relocating to England, whose audiences went nuts for their authentic retro rockabilly.

Returning to the United States, they scored Top 10 hits with songs like “Stray Cat Strut,” “Rock This Town,” and “She’s Sexy + 17.” The stylish videos were also a ubiquitous presence on early MTV. The Stray Cats separated in the mid-‘80s, with Setzer eventually having the most successful solo career, and Rocker and Phantom forming another group with guitarist Earl Slick (Rocker took over lead vocals). Over the ensuing decades, they’ve continued to reunite for tours and new albums.


“We keep in touch and we’re a unique band, and we never close the door on anything because there’s no reason to,” Rocker says. “It’s a conversation between the three of us. There’s not a script. I mean, we knew each other when we were kids before we even thought about a band.”

And while Rocker doesn’t have any particular standout memories of playing in Houston, there was one special date at one of Willie Nelson’s Fourth of July Picnics. “We were outdoors and in the middle of the show and I started hearing this other instrument. It sounded good, but I didn’t know where it was coming from!” Rocker recalls. “Willie had just walked out and stage and decided to play along. So I take that as a huge compliment!”

In 2021 though, Lee Rocker finds himself in a predicament faced by scores of other musicians across all genres: there’s a new album to promote, but no way to do so by playing shows on the road. And by his own admission, he’s not the type to do virtual or streaming performances.

“I’m going to wait it out, but I’m an optimist. I think the majority of us will get through his, and I think we’ll be doing shows starting in September,” he says. “I sure hope we can do it as long as the world keeps spinning. And we get our vaccines!”

For more on Lee Rocker and Gather Round, visit LeeRocker.com
KEEP THE HOUSTON PRESS FREE... Since we started the Houston Press, it has been defined as the free, independent voice of Houston, and we'd like to keep it that way. With local media under siege, it's more important than ever for us to rally support behind funding our local journalism. You can help by participating in our "I Support" program, allowing us to keep offering readers access to our incisive coverage of local news, food and culture with no paywalls.
Make a one-time donation today for as little as $1.