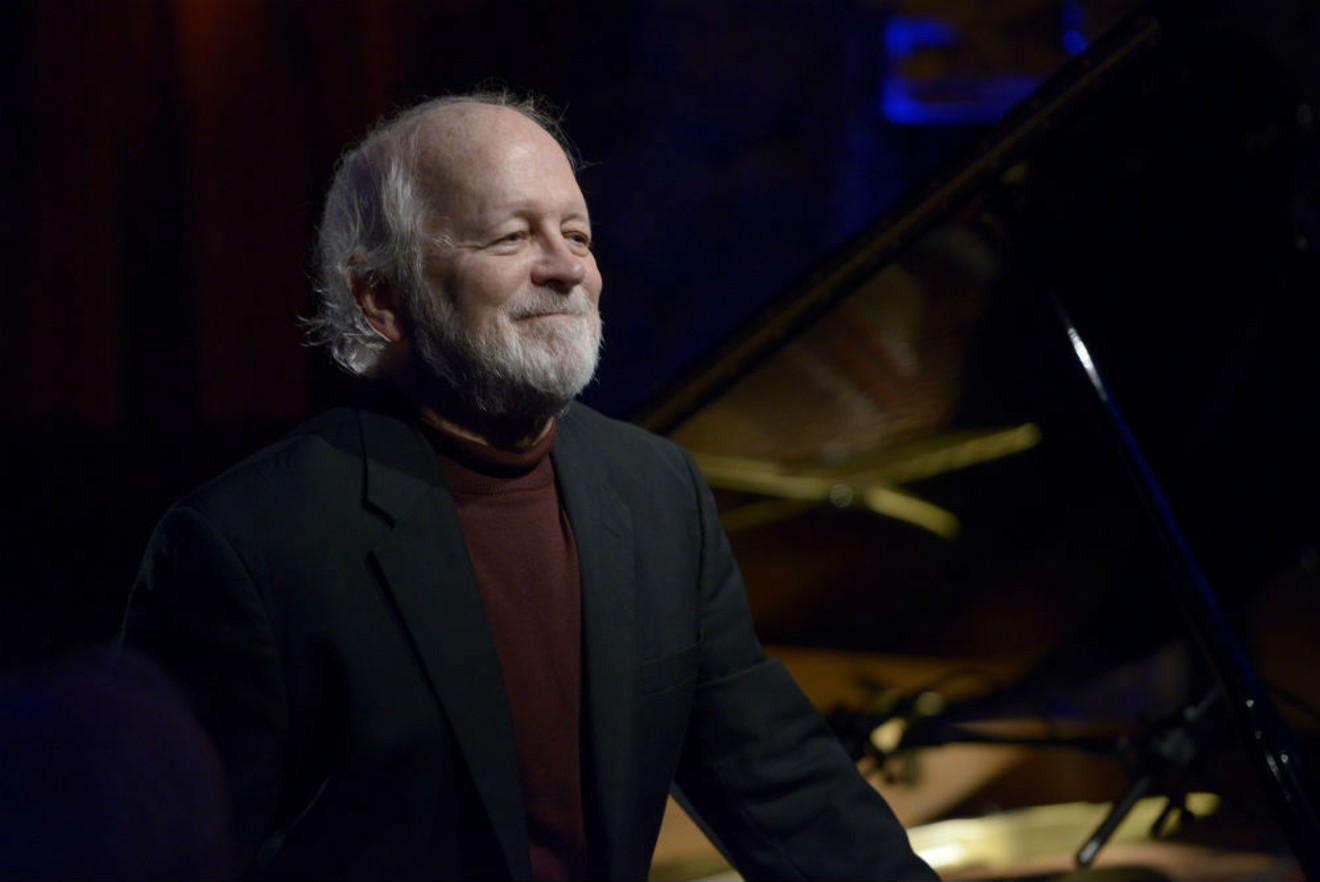 Paul English today. Photo by Rodney Bursiel
It only took jazz composer/pianist Paul English and an ad hoc ensemble two days to record his new album, Girl in Green. But that was all the way back in 2000, and the master tapes sat on his shelf for two decades before finally seeing the light of day.

Longtime Houstonian English had been booked to play the Texas Jazz Festival in Corpus Christi as the headliner. But he really wanted to add friend and personal hero David Liebman to the mix, and convinced organizers to give the world-renowned saxophonist the top spot instead.

Record cover
After playing the Festival with a band that also included Ed Calle (saxophone), Dennis Dotson (trumpet), Brennen Nase (bass), Mike Drake (drums), and James Metcalfe (percussion), English booked two dates in a nearby recording studio to create what was supposed to be the first release of a three-record deal. But the record company dissolved and the master tapes fell into a legal limbo. English was unable to release them, despite having them in his physical possession.

Now, after more negotiations and a settlement, those sessions have come out as Girl in Green. It features a mix of Paul English originals along with covers by jazz giants like John Coltrane, Miles Davis, and Bill Evans. Much of the material that the group put down was decided upon in the studio, with English tailoring his “closet full” of original material to the strengths of that specific lineup.

“It was very important to me that this come out. I was playing with one of the biggest names in jazz! But they just sat there and it was a drag,” English says today. “I’d performed with David a few times at Festivals and in quartet and duo settings. I really have admired him and he’s been a big influence on me. He’s helpful, fun to play with, and really inspirational.”

And though he’s one of the most established names in the Houston jazz scene, Paul English would not be if he had heeded the advice of his father who, ironically, was a music teacher, band director, and professional musician himself. That educational aspect was passed down to the son, who has at various times served on the faculties of Texas Tech University, Sam Houston State University, San Jacinto College, and Houston Community College.

“I always swore growing up I would never teach. I saw with my father the frustration and the lack of income, and he advised me against it. But teaching is the way a lot of musicians actually support themselves. In jazz, you’re not working as a player all the time,” English says.

And while today he mostly gives private lessons (not having “the stomach for the politics of academia”), he still enjoys encouraging his students and seeing their growth. “You have to think, do you have anything of value to pass on? And I think I do. I can save [students] some of the trials and tribulations that I had.”


For someone who is so closely associated with the piano, English’s first instrument of choice was actually the trumpet, taking professional lessons since the age of 8. Although he had also been “banging around on the piano” before he could talk, and played for fun.

Paul English’s parents were native Houstonians who met and married here, but by the time their son came along the family had moved to a small town in South Texas. English attended high school in San Antonio and college in Miami, and was playing professionally before deciding to relocate to Houston in 1977. Though not because of his parents’ ties. And a switch from trumpet to piano vastly expanded his work possibilities. There wasn’t a lot of demand for solo trumpet players.

“In the ‘70s and early ‘80s, Houston was a boom town and there were at least a dozen jazz clubs in Houston and all varieties – traditional, contemporary and smooth jazz, a real good mixture," English recalls.

“But when the oil crunch hit in ’83, they all disappeared and [the scene] never recovered. There’s not a hardcore jazz constituency here like there is in New York, Chicago, L.A., or San Francisco. Houston is a decentralized business town. People go to their jobs downtown and then go home. That’s changed with younger kids with income to spend, but they’re not thinking about jazz – it’s pop and rap. You can’t bemoan it, that’s just the way it is. Jazz is a very small part of the market.”

Paul English
Photo by Michael Hart
What irks English more might be what he sees as a lack of appreciation for the city’s history and legacy in the music that came from Houston-affiliated players like Bubbha Thomas, Joe Sample, David “Fathead” Newman, Illinois Jacquet, and especially Arnett Cobb.

“It’s a long and sore subject. Some great musicians have come out of this town. I mean…Arnett Cobb!” English says. “He’s got an exhibit at the Smithsonian, is known the world over for the Texas Tenor Sound, and revered as a king in Europe. But he couldn’t get a job in Houston!”

He’s also under no illusion that Girl in Green is going to light up sales charts. As for any kind of support tour, he’s hoping to put together some festival dates in Europe or Japan, and perhaps a string of dates in the northeast that may not feature the exact 2000 group on the CD. His current live shows may feature a trio, quartet, and other ensembles.

“With tours today, you might make expenses if you’re lucky. But electronic media is where it’s at: YouTube, Instagram, Twitter. The advantage of that is now you can reach a world market and you don’t need a record company or distributor,” he says.

“I remember trying to get my early records into stores here like Cactus and Sound Warehouse, and they wouldn’t even talk to me. Today, you’ve got access to a world market – but so does everybody else.”

Finally, the question must be asked: What’s the reason for the specific color hue of the femme fatale in the title of the title track, itself musically inspired by David Liebman’s own Lookout Farm record.

“I’ve never told this story. Maybe I should keep it a mystery!” English laughs. “I was writing this tune on the road with a show band. It was miserable. I was wearing a polyester jump suit with a ruffled tux shirt and a bow tie. I’m at the Holiday Inn downtown Houston and we’re waiting to rehearse. I started to put this tune on paper. This absolutely stunning young woman walks in, just drop dead gorgeous in the middle of the day in this club that smelled like smoke and alcohol and she was wearing a green dress. I’m 23 years old and I can’t take my eyes off of her. She sat down during the rehearsal, then got up and left before it was over. She just disappeared. And that’s the end of the story. All I have left of this girl is the song I wrote!”

For more on Paul English and Girl in Green, visit PaulEnglishMusic.com
KEEP THE HOUSTON PRESS FREE... Since we started the Houston Press, it has been defined as the free, independent voice of Houston, and we'd like to keep it that way. With local media under siege, it's more important than ever for us to rally support behind funding our local journalism. You can help by participating in our "I Support" program, allowing us to keep offering readers access to our incisive coverage of local news, food and culture with no paywalls.
Make a one-time donation today for as little as $1.