The Krayolas are Happy "Reimagining" Their Debut 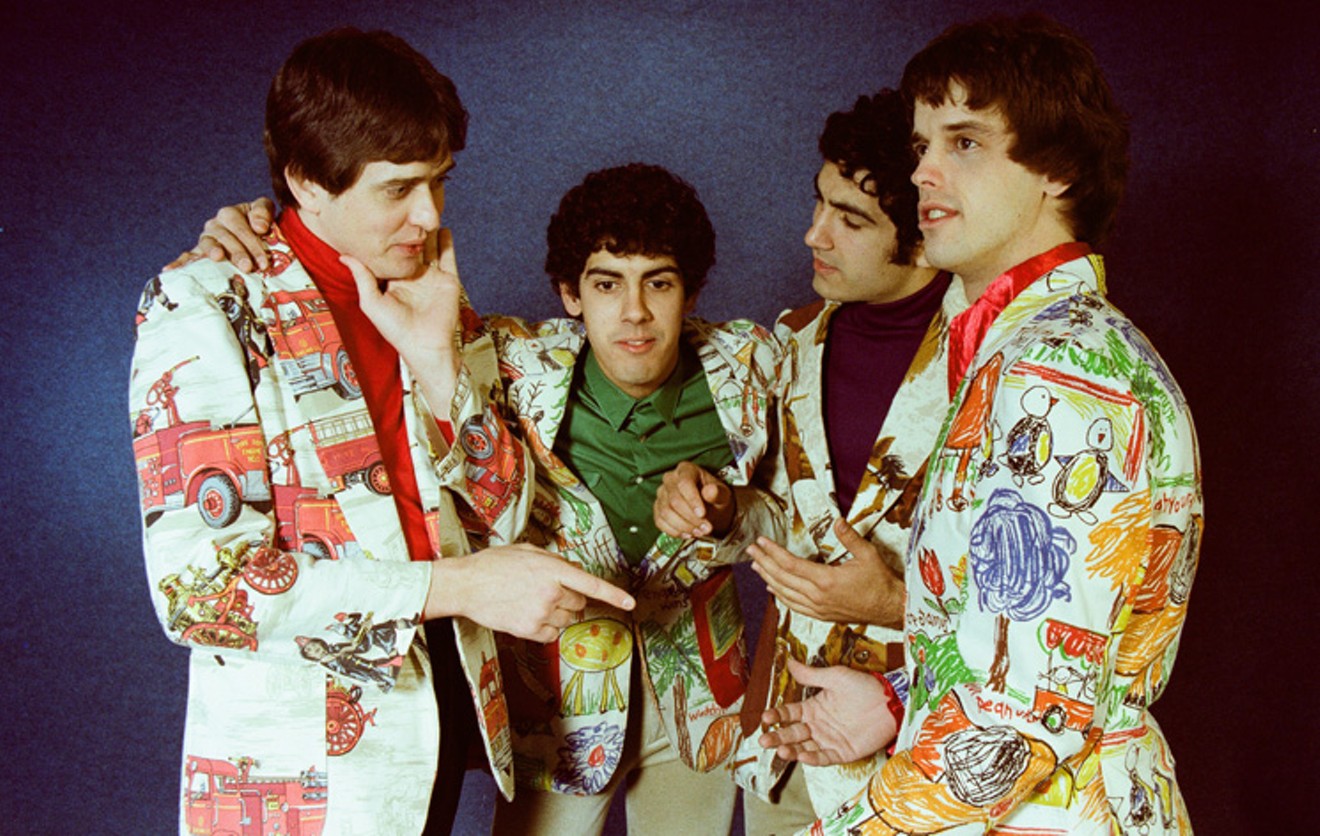 But for Hector Saldana, the Spring 1982 debut disc of his San Antonio-based The Krayolas brought a lot of…angst. And it has gnawed at him for decades.

Record cover
“I never liked the black and white artwork, the horrible cover photos, the thin audio fidelity, the song sequence and the stupid title,” he says. That title—Kolored Music—was supposed to be a play on the band’s name. Let’s say that it may not have aged well.

“But main reason was because we had butchered two of my best songs that had already been really killer 45s. We changed the arrangements, chords and forced horns on them. The results were pretty lame and a step backward from the original power-pop singles.”

Well, almost exactly 40 years later, a relieved Saldana has gotten an unexpected second shot at his first release with Happy Go Lucky (Box Records). It’s a “reimagining” of the debut the guitarist made with the then-lineup of his brother David Saldana (drums), Barry Smith (bass), and John Harris (“juju stick”). All four members shared lead and backup vocals.

The new version features eight of the 10 tracks on Kolored Music remixed and remastered, three from the vaults, and one newish recording. The lively and electric garage rock/power pop-based tunes run the gamut from buoyant, driving tunes (“All of the Time, “Dorothy,” “Times Together,” the title track), ballads (“Live is Gonna Getcha”), psychedelia ("Don't Give Up Hope") and soul (“Roadrunner John,” “Wall St. Blues”). It’s available on CD, vinyl, download and streaming.

Hector Saldana wrote all of the songs (except a cover of “The Sphinx Won’t Tell”), and many feature San Antonio’s legendary Westside Horns (Charles McBurney on trumpet, Louie Bustos on saxophone and Richard Navarro on trombone). The band called their style for this disc “bubblegum soul.”

“It’s sort of…self-deprecating. It was like an inside joke,” Saldana says. “We knew what we were doing wasn’t like the Rascals or ‘In the Midnight Hour’ or the stuff we used to play live. But we thought it was good. We weren’t making an Archies record. We thought of ourselves as somewhere between the Beatles, the Jam, Elvis Costello and the Roches.”

Harris, Smith, H. Saldana and D. Saldana at the Saldana family piano in the house where the band often rehearsed.
Photo by Clyde Kimsey/© Box Records
However, there’s an even more interesting story on its own about the record’s background, with a lot of twists, turns, and hopes dashed and revived.

The Krayolas arrived at Houston’s Sound Arts Recording studio in January 1982, recording the entire project in just three days, the 4th-6th. The reason the San Antonio group had come to the Bayou City was that Hector had a friend whose little brother was a jukebox operator, and he’d promised Sound Arts owner Jeff Wells an antique Wurlitzer jukebox if the band could use the studio.

The jukebox was delivered, but the band’s production cost overruns meant that Wells kept the master multitracks, though he did give the band a lesser quality ¼-inch tape copy from which Kolored Music was pressed.

Flash forward to October 1993 when flooding devastated Houston. The New York Times reported some neighborhoods were lying under eight feet of water. Governor Ann Richards toured the devastation by helicopter. And everything stored in Sound Arts Recording—including those Krayolas masters—were destroyed. Or so it seemed.

“We were brokenhearted knowing that we’d never get the tapes,” Saldana says.

The Krayolas at a Houston gig on February 13, 1982, billed as the 2nd Annual Valentine's Day Massacre and Birthday Blowout and included Dr. Rockit, Sisters of Mercy and Targets of Love. The party was raided by Houston Police. L to R: Smith, D. Saldana, Harris and H. Saldana.
Photo by Bill Daras/© Box Records
After Wells passed, Saldana got in touch with his widow to see if perhaps anything did survive. Wells’ business partner, Brian Baker, overheard the phone message, and assured Saldana they did not.

But if Saldana’s day gig as a curator at Texas State University’s Witliff Collections has taught him anything, it’s that anything can turn up at any time. He urged a growingly impatient Baker to look again, even if he could just locate the “safety” backup tapes.

Lo and behold, Saldana got a phone call. Baker said he’d found something in a new storage unit that came from a closet in the old, flooded studio. It was two boxes of 2-inch tapes—all of the Krayolas’ masters. Saldana says even the quick mix copy that Baker dubbed and sent to him already sounded better than the real version of Kolored Music.

“I was like…holy shit!” Saldana says. “It’s a restoration I never thought I’d get to do, since we thought the tapes were gone forever.”

(Clockwise from top left): H. Saldana, Smith, D. Saldana, "Sparky" and Harris. The picture sleeve for the 45 "The Sphinx Won't Tell"/"Happy Go Lucky," the only single issued from Kolored Music.
Photo by Bill Daras/© Box Records
Happy Go Lucky is the second in a trilogy of archival Krayola collections, the first being 2020’s Savage Young Krayolas. It’s Barry Smith and not the Saldana brothers featured on the front cover of that release; a tribute notes his death the year before. That event really kickstarted Saldana to look back at the band’s output.

“Barry was like the crazy older brother, and a bit more experienced. He was a risk taker, had a lot of good ideas and a tremendous showman. And a true believer,” Saldana says. “I was hesitant, but he had more of the vision for the band. And he had an edge to him.”

It was an edge that often brought Smith into conflict—and even fisticuffs—with David Saldana the most. But Hector credits Smith with bringing in the Westside Horns, whose work really elevates the record.

Saldana says it was partially a power move by Smith, who may have been prickly that the Saldana brothers were working separately on a record with René Ornelas, one half of the popular ‘60s Latin pop duo René y René from Laredo.

David and Hector Saldana at onstage in Houston at Rockefeller's in 1982.
Photo by Bill Summersett/© Box Records
John Harris was a friend of Smith’s and a late addition to the group, recruited for his singing voice and the fact that he could sit in on the drums during live gigs so David Saldana could come up front to sing his numbers. Saldana says that he largely stayed on the sidelines while the other three fought and is credited on Happy Go Lucky with playing the “juju stick.” Harris now lives in Austin.

“This was an actual stick that we found on the side of the road, and it had all sorts of things hanging from it!” Saldana laughs. “It had a metal pan, a spring, a golf ball, a bell and a tambourine on it.”

Shades of Screamin’ Jay Hawkins, the band put a skull on top and named it “Sparky.” You can see Harris holding him on the center photo on Side 2 of the record. The other features David Saldana holding a boombox, from which the brothers derived the name for their label.
Always subject to personnel changes, the record’s lineup only lasted a few more months, as Harris left in the summer of 1982. The band went to New York to hopefully play some gigs but didn’t bring the Westside Horns. Eventually, things just fell apart.

“We were pretty unmanageable and very young, which explains a lot of our problems,” Saldana says today. “We were too cocky, full of shit, power mad and bratty.”

The Saldana Brothers have fronted various lineups of the Krayolas over the years, but the current one—which also features Hector’s sons Nicky and Jason on guitar and drums—seems to have some new energy and staying power. Or will later in the year.

“I just came from rehearsal with my brother, and we rehearse with the boys about once a week,” Saldana says. “But it’s so hot in the summer, it’s hard to play! We’re hoping for more gigs in the fall and winter.”
The last track on Happy Go Lucky is “We the People,” a call-to-arms which the Saldana Brothers recorded on Hector’s birthday with some backing musicians in 2013 to commemorate the 50th anniversary of Martin Luther King’s “I Have a Dream” speech.

“I wanted to end this with a little bit of a message. Something uplifting, especially after the pandemic and the political upheaval,” he says. “And I wanted to fast forward a little bit.”

Next up on the Saldanas’ to-do list will be the 2023 release of a “lost” album the Krayolas recorded in the spring of 1979. The sessions for that produced 26 tracks, which Hector will pare down to 12 or 14 for the release. The title? Confessions of a Chicano Boy Band.

But today, four decades after the release of their debut, Hector Saldana is finally at peace with the new version of their debut. Making him fairly…happy go lucky.

“Whatever you think of the music, whether it’s good bad or indifferent, that’s what we’re interested in knowing,” he sums up. “I just wanted to get the audio quality right this time!”

For more on the Krayolas or to get Happy Go Lucky, visit TheKrayolas.com
KEEP THE HOUSTON PRESS FREE... Since we started the Houston Press, it has been defined as the free, independent voice of Houston, and we'd like to keep it that way. With local media under siege, it's more important than ever for us to rally support behind funding our local journalism. You can help by participating in our "I Support" program, allowing us to keep offering readers access to our incisive coverage of local news, food and culture with no paywalls.
Make a one-time donation today for as little as $1.