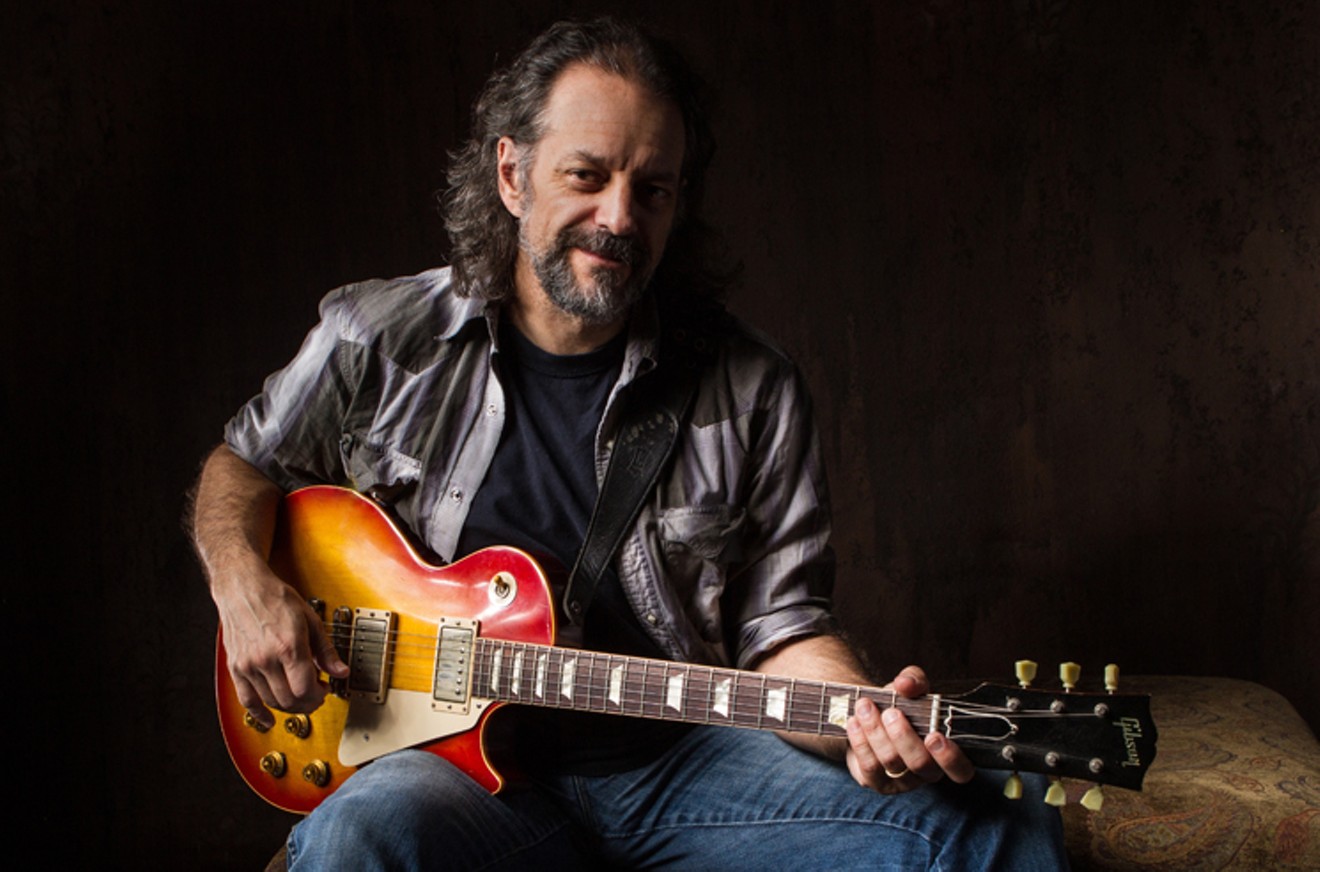 Andy Aledort has distilled a lifetime of guitar playing into his new double CD. Photo by Alison Hasbach
The most common questions that master guitarists tend to get asked is "When did you first pick up the instrument?" and "How did you decide to make a career out of it?" Via Zoom from his home in New York, a wry smile creeps across Andy Aledort’s mouth hearing the same queries.

“You assume that I actually had the thought I could make a living playing guitar! How insane!” he laughs. But to start, he says that his singer/actress mother bought the instrument while she was still pregnant with him. 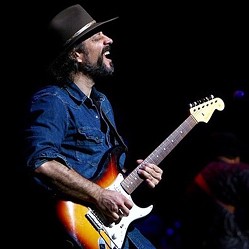 Andy Aledort live.
Courtesy of Andy Aledort
“I kind of think she bought it for me. The guitar actually beat me to the house! And it sounds crazy, but I remember being two or three and crawling around plucking on the strings and it made this sound. I was fascinated.”

Fast forward to the fateful night of February 9, 1964 when the Beatles first appeared on The Ed Sullivan Show. That one night launched countless musical odysseys of teens and pre-teens across the country, like the then seven-year-old Aledort, who was watching in rapture. And he had his eye on one of the Fabs in particular.

“Watching the Get Back documentary recently, I realized that George Harrison was my first guitar hero,” he says. “Even then, I was looking at this one guy going ‘There’s something up his job that’s appealing to me. He has a responsibility and a job different from that guy singing or the other guy singing. And I started playing at the age of 11.”

Today, Andy Aledort wears so many hats, he’s got to be part hydra just to don all his musical chapeaus.

The singer/songwriter/guitarist is beloved by readers of Guitar World and axe-heads for his interview columns and musical transcriptions (especially the work of Jimi Hendrix) as an Associate Editor. He produces instructional videos and DVDs and gives live guitar lessons via Zoom. He co-wrote with journalist Alan Paul the definitive biography of Stevie Ray Vaughan, Texas Flood. 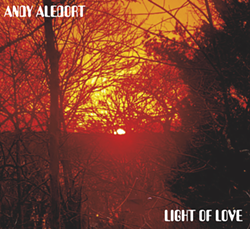 record cover
He’s also toured the world as a player in the bands of former Allman Brothers Band guitarist Dickey Betts, as well as the annual Experience Hendrix jaunts. And he gigs as a solo artist, with his group the Groove Kings, and with the ABB-tribute group Friends of the Brothers. Oh, and he’s a visual artist as well.

Now, he’s added an ambitious and searing studio record to his resume with the release of Light of Love (World’s Finest Records).

The double CD features 18 tracks that run the gamut from blues and rock and ballads to several instrumentals and flex-fingered fretboard workouts. They’re all originals, save for a cover of Willie Dixon’s “You Shook Me” as the final tune.

Light of Love had a long gestation period. Long. He started recording some of the tracks as far back as 28 years ago and as recent as two months ago in different sessions and with different musicians. On some, Aledort would add new parts here and there. None have been released to date.

“I do feel like the songs and the style and the playing all sounds like it’s coming from the same place,” he says.

Aledort’s career as a lead player and/or sideman has been a series of connections. It began when he started gigging with bassist Tommy Shannon and drummer Chris Layton—better known as Double Trouble, Stevie Ray Vaughan’s rhythm section. The trio play on the Light of Love blues burner track “Have Mercy on Me.”

Aledort says he worked with the pair 20 years ago when they hired him for a session. After it was over and there was a half hour of studio time left, he asked Double Trouble if maybe they could record one of his songs. He showed them “Have Mercy on Me,” the trio played it just once. Shannon punched in a couple of overdubs, and that’s what’s on the record.
That association led him to spend a decade with Dickey Betts, and then on the Experience Hendrix tribute tours with Jimi’s former bandmates Buddy Miles and Billy Cox. No pressure throughout, or course, playing the same parts originally done by some of the greatest guitarists in rock history. But he seemed to get a seal of approval.

While recording a version of Hendrix’s “Machine Gun” with Miles for a record, Aledort remembers having nine separate music stands with a 15-page transcription arranged like a horseshoe.

He dubbed himself “The Hour Glass” because as the song went on, he’d have to bend down and pick up his wah-wah pedal and move it to the next stand in time to play again. “We got to the end of the song and Buddy had a big smile on his face and said ‘Man, if Jimi was here, he’d be all [impressed]. Come over here and give me a hug!’”

With the more mercurial Betts though (a guitarist position he took over after the departure of Houston’s own Mark May), he remembers one particular lesson taught while the band was on the road with the Outlaws in between two shows. Andy Aledort in the moment.
Courtesy of Andy Aledort
“The band was very in tune and playing very well, and I thought this one show sounded amazing. So tight like clockwork,” he says.

“After the first show we were on the bus and Dickey came in and said ‘Everybody played perfectly. No one missed a note and is sounded like a record. But it was the most boring motherfucking thing I’ve ever heard in my life! I didn’t hire you to be trained monkeys, and I’m going to fire every one of you if you play the second show like that!’”

It wasn’t Aledort’s first experience with the Betts temper. “Dickey yes, he could be a difficult person and he would be the first to admit it. We had our ups and downs. He fired me four times! So that meant I must be doing something right!” he laughs. “But he wanted you to speak with your instrument, and directly to the audience. And Dickey was one of the greatest players ever.”

Aledort does have a different perspective than most guitarists in that he also writes about guitar players, transcribes guitar parts, and teaches guitar. So how does that inform his playing?

“The biggest thing about being a music [writer] for magazines is that I started to meet my biggest heroes like B.B. King and Buddy Guy and Steve Morse and Jeff Beck. And just from talking to them and being around them, it really opened my eyes,” he says.

“It just rubs off on you. It’s like osmosis, and it helps me in my own writing of and connection to music. It’s a confirmation of this creative wavelength that you want to be on. And it creates momentum in yourself.”
In wider pop culture today, there is a current wave of Tik Tok and viral video stars getting clicks and forwards by what some see as just detailed party tricks more than a lasting talent (i.e., “10-year-old shreds just like Eddie Van Halen!” “Junior high school girl crushes Rush drum solos!”). Aledort is surprisingly positive for a guy who has spent literally hundreds of thousands of hours honing his craft. Callouses and all.

“I don’t know. Every case is different. I think about this old video of a 10-year-old [and future Rock and Roll Hall of Famer] Billy Preston playing with Nat ‘King’ Cole. And look what he did years later, he became this incredibly important and historical person who contributed to the Beatles and the Rolling Stones!”

To that end, he calls Jacob Collier’s videos made a decade ago when he was a teen “brilliant,” and his talent has only gotten better. “And who knows? If the [viral video kids] aren’t being forced into it by their parents, they’ll continue to grow and have talent.”

Aledort is planning on playing some upcoming gigs, both with his own band to promote Light of Love and Friends of the Brothers. The latter outfit just got picked up by a booking agency who is already putting them on bigger stages.

Finally, Aledort remembers something of particular importance told to him by Tommy Shannon about playing live. “He said the best feeling in music is that you have no idea what’s going to happen five seconds from now. And you can’t wait for it to happen,” he offers, still with a bit of awe. “That’s what music is about.”

For more on Andy Aledort and Light of Love, visit Andy Aledort.com
KEEP THE HOUSTON PRESS FREE... Since we started the Houston Press, it has been defined as the free, independent voice of Houston, and we'd like to keep it that way. With local media under siege, it's more important than ever for us to rally support behind funding our local journalism. You can help by participating in our "I Support" program, allowing us to keep offering readers access to our incisive coverage of local news, food and culture with no paywalls.
Make a one-time donation today for as little as $1.