Michael Des Barres: A multi-hyphenate entertainer with boundless energy and a bottomless reservoir of stories. Photo by Ross Halfin/Provided by Michael Des Barres
With 50 years in the music business, singer Michael Des Barres certainly counts as rock royalty. But he’s also actual royalty, as in the 26th Marquis Des Barres of France—though his childhood was anything but a soft ride on a royal horse-drawn coach.

“My father was a Marquis, but he was in prison when I was born for embezzling money. And my mother, who was 17 when she had me, was his fifth wife, a stripper, and was put in a mental institution. They were Caligula and Lord Byron,” he says. 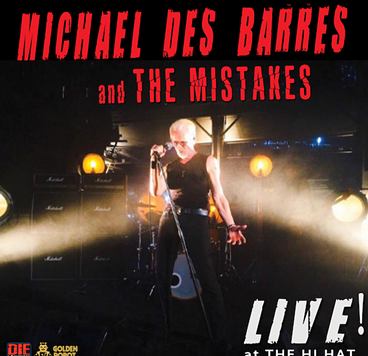 Die Laughing Records cover
“So I was sent to these very expensive boarding schools at a young age. I never went home. There was no home. I thought the only way I was going to survive was to really understand humanity, what people want from me, and what I could give them to make my life secure. Because I was on my own. And that was a blessing to me in many ways.”

His extraordinary life and career was the subject of this year’s documentary Michael Des Barres: Who Do You Want Me To Be? It’s title is taken from “Obsession,” the song he co-wrote with Holly Knight and which became a big hit for the group Animotion in 1985. “I’ve been using my vibe as currency since I was 8 years old,” he says in the documentary.

His most recent music project is the EP Michael Des Barres and the Mistakes: Live at the Hi-Hat (Die Laughing Records). It’s six songs of raucous, raw rock and roll, and oozes a club vibe that seems like a lifetime ago, pre-pandemic.

“My new band, we’ve only had six gigs, and this was our second show ever. When everything shut down, I knew I had this magic night recorded,” he says. “I don’t think we’ll be shoulder to shoulder [in venues] for a couple of years. But listen, man, there’s a lot more we can do with our lives than to go rock and roll shows. We’re going to have to sacrifice for things that really matter in life.”

The Mistakes include Erik Himel and Loren Molinare (guitars), Paul Ill (bass) and Matt Starr (drums). Not surprising given their relative short lifespan so far, the six songs on the EP are all covers: Three from Des Barres’ ‘70s bands, glam rockers Silverhead (“Hello New York,” “16 and Savaged”), and hard rockers Detective (“Detective Man”), as well as Marvin Gaye (“What’s Goin’ On?”) and a Little Richard medley.

“Hello New York” was about Silverhead’s very first night in the city in the early ‘70s, which saw them take in a show by the New York Dolls and return to their hotel…which was on fire.


“I walked into what most people would consider a nightmare, but to me it was a dream because my life has always been on fire!” Des Barres laughs. “We went to Max’s and there were five people there. We went back to the hotel and got in the elevator and the fucking thing was on fire. There were firemen in outfits from 20,000 Leagues Under the Sea breaking down the fucking door to get us out! [Dolls guitarist] Johnny Thunders was so stoned he was saying ‘It’s really warm in here.’ We left covered in soot!”

Of a deeper meaning to him is Gaye’s timeless (and now timely) classic. “When I first heard it, I already loved Marvin Gaye. Everyone did,” he offers. “In that sophisticated, sexy way, he could talk about things and police brutality. It was Black Lives Matter, but 50 years ago!”

There’s also the T. Rex cover “Bang a Gong (Get It On),” which became a 1985 hit for the Duran Duran offshoot group The Power Station. Robert Palmer sang on the record, but Des Barres took over for the band’s live appearances. That put him on stage at JFK Stadium in Philadelphia on July 13, 1985 as part of Live Aid to sing it in front of nearly 90,000 audience members and millions more watching at home around the world.


As to what makes the Mistakes different from his other bands, Des Barres says there’s no comparison to their situations. “Silverhead and Detective were bands with record deals and managers and agents and press,” he says. “The Mistakes are an odd piece, which is why I called them that. Over the years, I discovered the best songs I wrote and gigs I played…there were a lot of mistakes! You have to do rock and roll carefully, but carelessly. You have to throw it up and see where it lands. Rock and roll is not a discipline.”

Even before he was a rocker, Des Barres was a child and teen actor, most memorably as the student-behind-sunglasses in the 1967 Sidney Poitier film To Sir, with Love. But he dove head first into the rock clubs of Swinging ‘60s London, attending shows not only by big names, but those known only to record crate diggers.

“I went to school with [drummer] Mitch Mitchell, and he told me one night he was playing with this black, left-handed guitar player from America and to come to the club and see him. That was Jimi Hendrix, and he was something!” Des Barres says. He also rattles off the names unfortunately often unknown in the U.S. like Chris Farlowe, Steve Marriott, Terry Reid, Brian Auger and Graham Bond.

“[Bond] was into Aleister Crowley, black magic and all that shit. In those days, everyone was experimenting with everything,” he says. “It was a piece of shit nonsense. Black magic, my ass! We were all strung out on hashish and velvet and sex.”

“I love doing it, it’s really something. How great am I?” he laughs. “It’s just great for rock and roll music in general. I’ve been there almost seven years. I have such enthusiasm for this music, and I feel like I’m listening to it with the audience. It’s a beautiful thing.”

Finally, in the United States, his TV acting credits over the years have been expansive, appearing on everything from Miami Vice, St. Elsewhere, and Alf to Seinfeld, Suits, Bones, and NCIS. Music nerds remember him on the original WKRP in Cincinnati as one of the oddly well-dressed members of the band Scum of the Earth, who specialized in their own genre: “We play Hoodlum Rock,” one of his bandmates offered. “It’s several levels below Punk Rock.”

But his most famous stint was in the original MacGyver show, as the recurring assassin villain Murdoc (he’s also returned for the current reboot, but in a different role). That led to his most, um, interesting request from a paying customer on the celebrity video greeting service Cameo.

“A guy asked me to do one in character as Murdoc for his wife. He wanted me to tell her that I loved her, and that I want to take her to dinner, and make mad love to her in a hotel!” he laughs. “I get a lot of sexual stuff, but that was the funniest fucking thing. And the truth of the matter, is that he was serious. He told me he wasn’t kidding. How about that?”

For more on Michael Des Barres and the Mistakes, visit MichaelDesBarres.com
KEEP THE HOUSTON PRESS FREE... Since we started the Houston Press, it has been defined as the free, independent voice of Houston, and we'd like to keep it that way. With local media under siege, it's more important than ever for us to rally support behind funding our local journalism. You can help by participating in our "I Support" program, allowing us to keep offering readers access to our incisive coverage of local news, food and culture with no paywalls.
Make a one-time donation today for as little as $1.