Lee Oskar looks to his family's - and his - challenging past on new record. Photo © Michael Bruce/Courtesy of Lee Oskar Productions
It was in December 1944 or January 1945 and Rachel and Judy Beker were running for their lives—literally. Imprisoned with tens of thousands of other Jews in a Nazi-run Stutthof concentration camp in Poland, the occupants were on a forced march leading to a certain death in a mass grave. The two young teenagers somehow burst out, ran madly through the snow, and eventually landed the next year in Denmark. 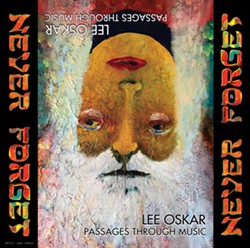 record cover
Rachel would marry Joseph Levitin and they would have two sons—Rolf and Lee. The latter would eventually emigrate to America and—as Lee Oskar—find worldwide fame as the harmonica player and co-founder of the rock/funk/Latin band WAR and later as a solo artist.

The story of and tribute to Rachel and Judy and the millions of other victims of the Holocaust is the overriding theme of Oskar’s new solo record, Passages Through Music: Never Forget (out January 28 on Dreams We Share Records). It also addresses the promise of America, freedom, and the hope for world peace. Oskar calls the record his “ultimate statement.”

“If there weren’t atrocities like the Holocaust, art would just be about wonderful things. There’s a very dark side to humanity. You can’t just blame Hitler or Mussolini or anybody who is a monster, because there also have to be people who buy the B.S. and the propaganda.” Oskar says via Zoom from his home in Washington state.

“You create an enemy to get everyone to line up behind you. And it’s very evil and conspiratorial. So many human lives were lost, including my grandmother, who was murdered in a gas chamber. It’s haunted me for many years, Bob.”

Oskar has written about these topics before. In fact, all of the record’s nine tracks were written by Oskar up to 40 years ago. But they are together thematically here and newly recorded over the past few years with a wide list of players. Titles include “Far Away Dreams,” “Miracle Children,” “Song From Mom,” “Liberty (An American Waltz),” “World for Peace” and “My Road.” “World for Peace” also features a snippet of his late mother’s recorded voice and spiritual singers from Israel.

Judy and Rachel Beker, c. 1946, in Copenhagen, Denmark.
Lee Oskar Family Archives
“My mother and my aunt and so many others showed so much courage. I thought about that when I started my own [journey],” Oskar—who came to the U.S. alone at the age of 18—says. “I had ambition, but they had courage.”

Oskar first started exploring themes of travel and immigration and hopes in a new land with “I Remember Home (A Peasant’s Symphony),” the first track of his 1976 self-titled solo debut record. He remembers that his mother thought it sounded like some of the music she had heard growing up and wondered aloud to her son if anyone would even want to listen to it.

“I told her, ‘Mom, if it was beautiful then, it’s beautiful now,’” Oskar says, adding that it even inspired her to start singing again after years of not doing so.

And while Judy would become an assertive and outspoken activist and educator about the Holocaust and human rights, Rachel rarely said anything at home about her wartime experiences. Her son says she had would be now recognized as Post Traumatic Stress Disorder (PTSD).

The sisters made a harrowing journey to freedom, at one point even posing as Russians to avoid detection before falling under the “care” of a Nazi-sympathetic woman. Oskar says she treated the girls as slaves before taking them via boat to Denmark, which was quickly torpedoed. Finally, the sisters made it to Denmark, where representatives of the Red Cross finally liberated them.

Oskar says that he really felt their energy and spirits with this project, and that extended to the many paintings he created for the cover and booklet (Oskar is also a longtime accomplished painter). “If I didn’t do this, I would go to the grave feeling very disappointed in myself,” he adds. “Because a true artist reacts and reflects to their surroundings and expresses what they think and feel.”

Of course, it’s somewhat easier to tell a story’s specifics in songs with lyrics, but (like most of his material), Never Forget is solely instrumental, featuring Oskar’s harmonica along with more traditional rock/jazz instruments, strings, and even world instruments like a flamenco guitar and oud stringed instrument.

But when asked if it’s more difficult to get across an idea or feeling in song without words, Oskar is quick to counter with a resounding no.

“The terminology of the word ‘song’ is defined as ‘lyrics with a melody.’ I don’t write songs, I write compositions. My melodies may be lyrical, or could be great songs, but my natural thing is to compose music that stimulates and triggers emotions without having a word in it,” he says.

“I can play a Lee Oskar & Friends concert for two hours and never say a word. I sing with my harmonica. I’m not playing my compositions, I’m singing them. So, people can feel emotions without lyrics.”

And to that end, he adds that the record on a wider note is not just about being Jewish—it’s about humanity. “We always talk about how we should appreciate our differences. That’s bullshit. What we should really recognize is how much commonality we have as human beings–which is about 99 percent of it,” Oskar offers.

“The commonality is so much greater. And if we recognize that and don’t have fear, sooner or later no matter what tribe you’re part of, we’ll all come together on the same page.”

To that end, he says he feels that Chicanos, Native Americans, and African-Americans can do more and more to stand up to tell their stories as he feels many Jews have.

“We’re still a long way from feeling safe and at peace with all of humanity’s [infighting],” Oskar says. “Who knows? It might take aliens to come down and then we have a common enemy!”

Oskar says he is currently writing and recording new music and continues to paint. And since 1983 he’s run Lee Oskar Harmonicas in conjunction with manufacturer Tombo, producing a wide range of harmonicas for both beginners and skilled players. He's also involved with the social advocacy through music organization Playing for Change.
Of course, Lee Oskar is best known for his work with WAR, who during the 1970s was hugely successful in terms of both record sales and concert attendance. Oskar and saxophonist Charles Miller comprised the synchronized “horn section,” and the band’s best-known tune is probably “Low Rider.” Oskar says that he came up with the famous first 12 notes of the central instrumental hook, and Miller the 12 note response.

Like many of the band’s songs, the “Low Rider” single was carved out of one of the band’s lengthy jams in the studio, and recalls when the pair first began to showcase said hook.

“Charles and I were on a pier in Santa Monica crabbing. I had convinced him that it was better to do it at night when they come out. We were drinking tequila, but we never caught anything,” Oskar says, smiling at the remembrance. “Then about 6 a.m. we went back and stopped at the studio because [the band] were still there recording. Charles went up to the microphone and started singing ‘LOW-RI-DER,’ and we just improvised from there.”
The majority of WAR’s catalog is now under the guidance of reissue label Rhino Records. They marked the group’s 50th anniversary this year of their 1971 band debut (WAR had released two previous albums in collaboration with singer Eric Burdon), with a box set of the first five albums and a new double CD greatest hits compilation with tracks like “Spill the Wine,” “The Cisco Kid,” “Why Can’t We Be Friends?” “Slippin’ Into Darkness,” and “All Day Music.”

However, the surviving four original members are in different camps and have been for years: Lonnie Jordan fronts the current incarnation of WAR, while Oskar, Howard Scott, and Harold Brown perform under the name The Lowrider Band due to ongoing legal battles.

Rhino has also hinted at the possibility what WAR fans have been clamoring for most (outside of induction into the Rock and Roll Hall of Fame): New records of unreleased and live material.

“I’m all for anything that is going to [bring attention to] any of the music that we created together,” Oskar laughs. “From both an artistic standpoint and a revenue one!”

To pre-order Never Forget or for more on Lee Oskar, visit DreamsWeShare.com
KEEP THE HOUSTON PRESS FREE... Since we started the Houston Press, it has been defined as the free, independent voice of Houston, and we'd like to keep it that way. With local media under siege, it's more important than ever for us to rally support behind funding our local journalism. You can help by participating in our "I Support" program, allowing us to keep offering readers access to our incisive coverage of local news, food and culture with no paywalls.
Make a one-time donation today for as little as $1.